I wanted to activate Mt. do Oural this summer and after searching the information in my notebook, I realised I had forgotten to include the info for this summit, so I searched for my activation report of last year and found what I needed:

I woke up at 8 o’clock this morning and headed to the Lat./Long coordinates of the parking spot and start point.
The drive was an absolute pleasure, particularly the last about 20 Kms in the deep rural Galicia in eucaliptus forests. This picture can give you an idea of what I was seeing: 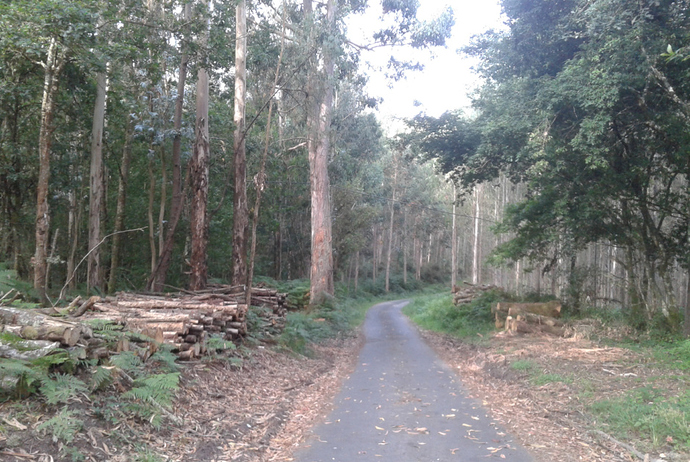 Eucaliptus is not an autoctonous tree of this region. They were brought from Australia and they have now conquered the region mainly due to its very rapid grow.

After parking at exactly the indicated spot, we (our dog LUcho and I) started the hike.
See how much fun Lucho was having: 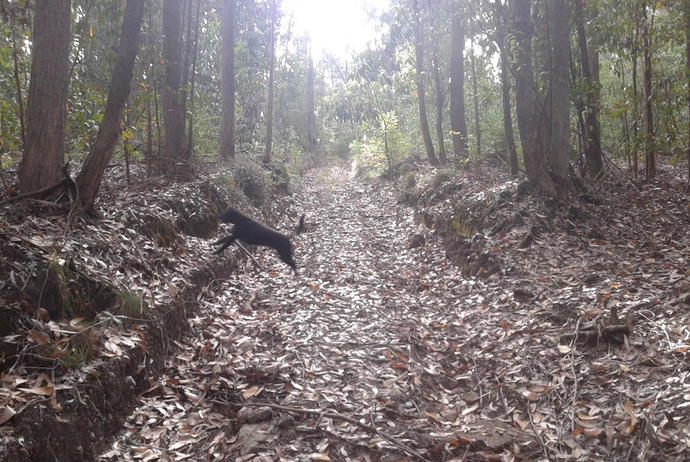 The hike took us just 12 minutes. Here we were nearly reaching the summit. 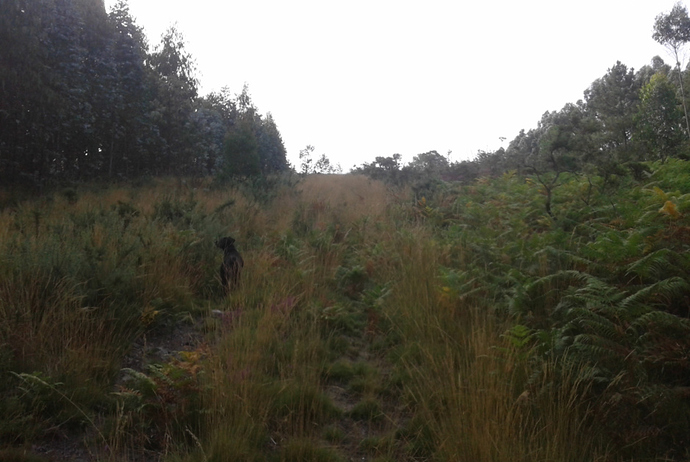 As soon as the summit was reached, I set up using exactly the same tree I used last year to tie my fishing rod to. 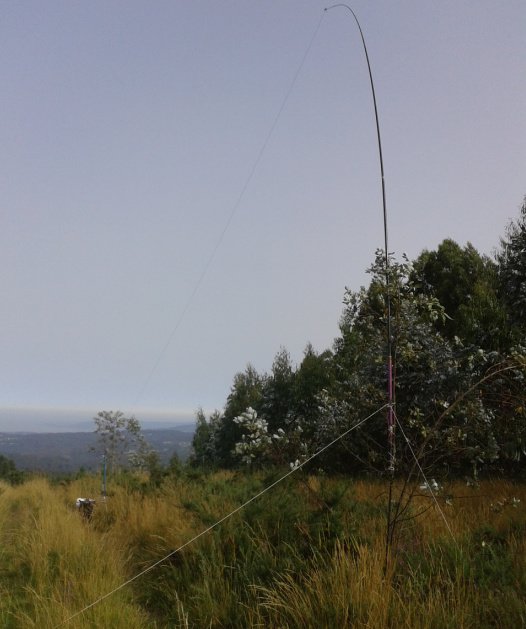 Instead of on ground, the bottom end of my fishing rod layed on one of the tree’s branches as this allowed the top end to be about 1m higher. Doing this put an extra effort to the young and still too flexible tree, so I installed 2 guying ropes to avoid too much bending of the tree.

Far in the distance there is the Estuary of Betanzos but the air was too hazy over there so the visibility was very poor. 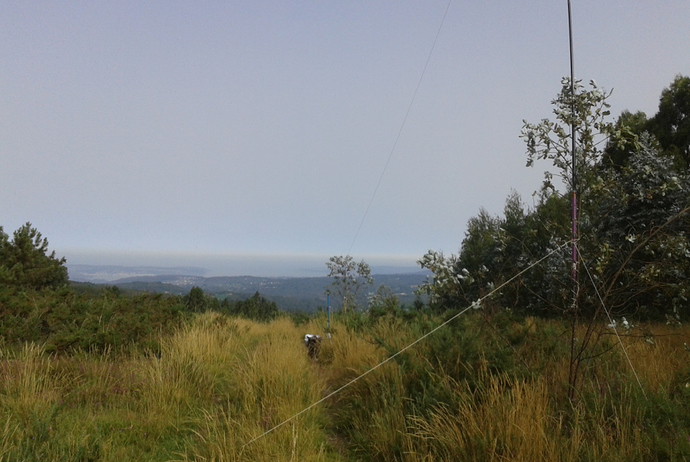 This is a sun tanned Guru on the summit: 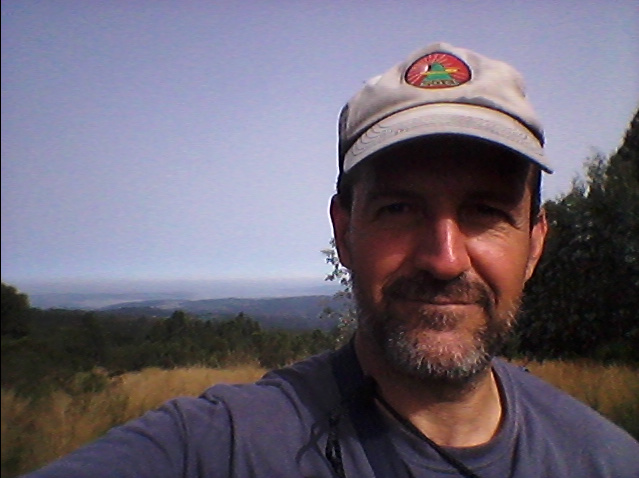 And this is Lucho taking some rest: 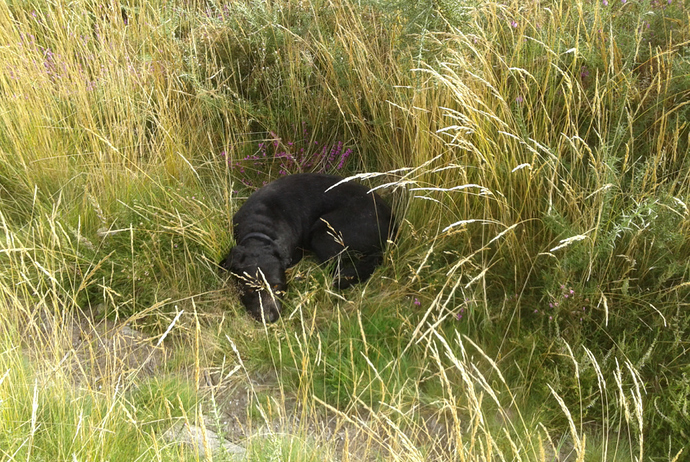 I had alerted for 10h00 utc but I arrived to the summit much earlier, so I editted my alert and changed its ETA accordingly.
I started the activation trying to chase an activator on 17m CW, but I had difficulties tuning my endfed antenna and had to complete the first S2S QSO of the day with 4 bulbs in the SWR meter of my FT-817ND.
After this first S2S QSO, I went to 10m CW and proceeded with my plan to activate on all bands. The good thing of using the multiband endfed antenna with an ATU (antenna tuner) is that I managed to work on 8 different bands without having to lower or touch the antenna at any time. No links, no traps, just 9 or 10m of wire as a sloper to a 9:1 un-un and 7m of a horizontal counterpoise wire elevated about 1m from ground.
10m CW produced 4 QSOs.
I didn’t call CQ too many times after the last chaser as I wanted to work many bands and couldn’t afford spending too much time calling with no responses. So I QSYed to 12m CW.
There I logged 2 QSOs. I could have logged 2 more QSOs with PA0B and DK7ZH but they called me, I sent them their signal reports, but they never came back to me, so NIL (Not In Log), unfortunately.
On 15m CW I logged 8 QSOs and then QSYed to 17m CW once there were no more chasers.
I managed to tune the antenna perfectly this time on 17m, unlike at the start of the activation, when in the rush of trying to chase the S2S with Paul DL6FBK, I couldn’t find the right ATU set-up. This run on 17m CW let me log 3 QSOs. With no more chasers replying to my CQ calls, I said it was time to give the summit to my SSB chasers, so I QSYed to 20m SSB, where I logged 11 QSOs, one of which was a S2S with Bernd DL2DXA/P.
My QSY to 20m CW produced 7 QSOs, the last of which was the DX of the day with Bob AC1Z in NH.
After 20m, I QSYed to 30m and I logged 2 QSOs there. I could have also logged QSO with Lothar DL3HXX because he called me, I copied him and sent him my signal report, but he never came back to me, so NIL, unfortunately.
After 30m I QSYed to 40m CW where, with no little difficulties, I managed to complete a S2S QSO with Thomas DL1ASA/P. Then I QSYed to a clear frequency and called CQ for some minutes with no takers at all.
The Sun was pretty high by that time and my poor black dog Lucho was having quite a bad time in the nearly 32 degrees C of temperature not being able to find some fresh shade, so I was about to QRT when I thought about trying 6m.
So I called on 6m for a while and got chased by 2 EA stations, being one of them in the Canary Islands, which is no doubt the second DX of the day with a 1816Km distance between our respective locators.
I would have liked to keep calling on 6m for a longer time but I was really worried for Lucho in the heat as his tongue was fully out and his breathing too rapid, so I QRTed, packed up quickly and descended in about 11 minutes. 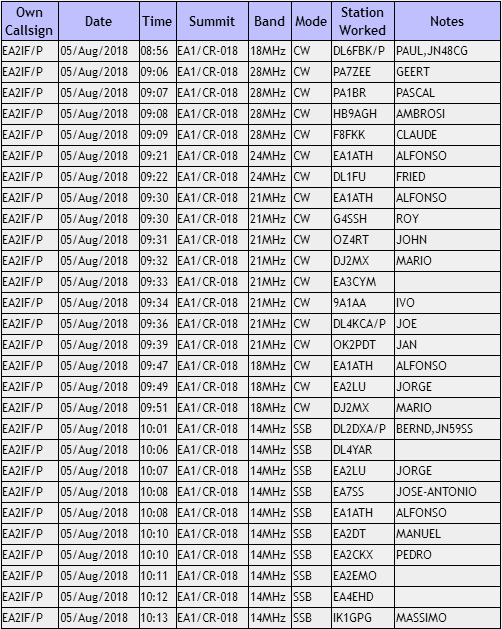 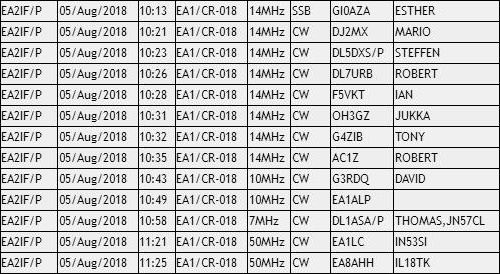 This a sweaty Guru once arrived to the car: 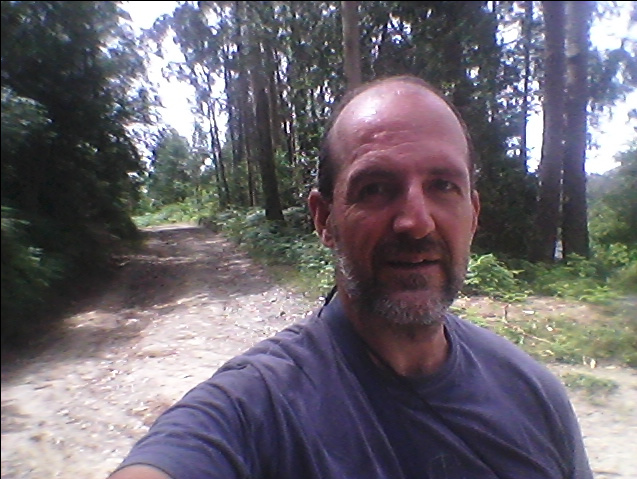 Always fun to read about activations in a distant and different country/landscape.

Good haul of contacts with the 817.

Hopefully Lucho is well hydrated now. We need a photo of him and I’m assuming it’s your dog.

Hi Paul,
Glad to read you enjoyed my report.
Yes, Lucho, our dog is perfectly cooled down and hydrated now.
I had taken a picture of him in the summit but for some reason didn’t included it in my report.
Now that you have asked for a picture of Lucho, I have editted my report and included the picture I took hm in the summit.
You can also see him jumping happy in the picture taken at the start of the hike.
73,

Thanks and always good to see the entire “team”.

I recognised those eucalyptus trees of course. The other place i have seen them is in LA Califormia. They looked so out of place there.

Great activation. Dog was so happy, ran out of energy.

Hi Andrew,
Well, the dog has usually a lot of energy. The picture you’ve seen was taken just after reaching the summit and he layed down on the tall weeds because they were surely fresh and provided some shade.
Today’s activation required a minimum hiking time of less than 15 minutes, so nothing to get anybody (man or dog) out of energy. The issue was the temperature and the Sun. Being his hair black, it traps a lot of heat when exposed to the Sun and he always tries to find some shade to escape from it. He managed to get some shade while the Sun was still not too high, but once it reached its top in the sky, the dog unfortunately couldn’t fnd any shade. He might have found some shade inside the nearby eucalyptus forest but this dog is so loyal to me that he rarely runs far away from me and he preferred laying next to me during the activation in spite of the hammering Sun he was getting.
Regarding the eucalyptus here, you will find them in great number not only in this region of Galicia in North-West of Spain, but also in at least the North of Portugal, where I’be been to and have found them in big number too.
These invading trees have several detractors, as they have been masively planted thus reducing the presence of the native original species.
The very rapid growth of these eucaliptus make them a very profitable investment, but it’s a shame seeing forests and natural environment in this area enormously altered in the sake of economical profitability.
If you come over, you’ll find more out of place eucaliptus, like the ones you found in LA.
You can find mainly these 2 species in the following areas:

However, in spite of this, the beauty of this landscape is memorable and I highly recommend it to be visited.
73,

Hi Guru,
Understand… I think a lot of species were moved around the world in the mistaken belief that they would never cause any problems. In australia we have willow trees which suck the creeks dry, not a good thing in an arid country.
Looking forward to seeing your country next year.
73 Andrew VK1DA/VK2UH