South of my hometown of Vancouver, BC, lies Mt. Baker. On fair weather days this 3,286m summit is visible from nearly any part of southwest British Columbia. “Baker looks good, today” is a commonly heard phrase from locals, and when light conditions are right the mountain really pops, as you can see below. 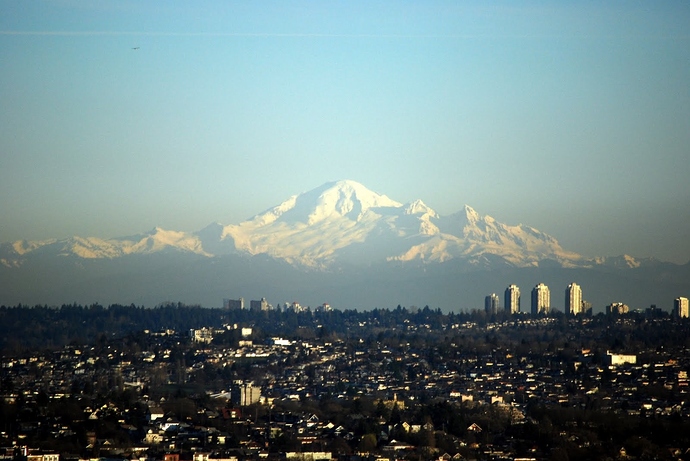 There are many routes to the top of Mt Baker, all of them requiring rope and crampon work. The most straightforward of them is the Coleman-Deming glacier to the Roman Wall. Car-to-car this is a 17km round trip, with an elevation gain of 2200m. Most people opt to camp at the foot of the glacier on Heliotrope Ridge, which drops 2 hours, 4.5km, and 600m off the day. This was our original plan: five of us would meet at the trailhead on Sunday at noon, hike up to the Heliotrope bivy to spend the night, and get an alpine start at 5AM. Unfortunately, it was not to be.

We’ve all forgotten things before. Sometimes it’s as innocuous as a toothbrush or camera, other times it’s more significant. This was one of those times. When my climbing partner and I arrived at the trailhead in Washington after a 2 hour drive from Vancouver we were shocked to find that a pair of boots and half the tent were missing. The tent we didn’t really need, but it’s difficult to strap crampons to a pair of flip flops. So, after consulting with the other members of our team, we decided that they would continue up to the campsite and we would drive home to get the boots, catch some sleep in Vancouver, and leave again at midnight to arrive back at the trailhead around 2AM. 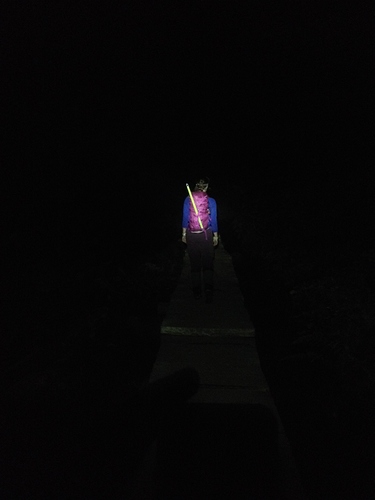 The trail up to the Heliotrope bivy is pretty straightforward, with the grade only increasing in the last kilometer where it jumps up to 25%. We met up with the rest of the summit team a little after 4AM and grabbed a bit of breakfast while they woke up and got dressed for the day. 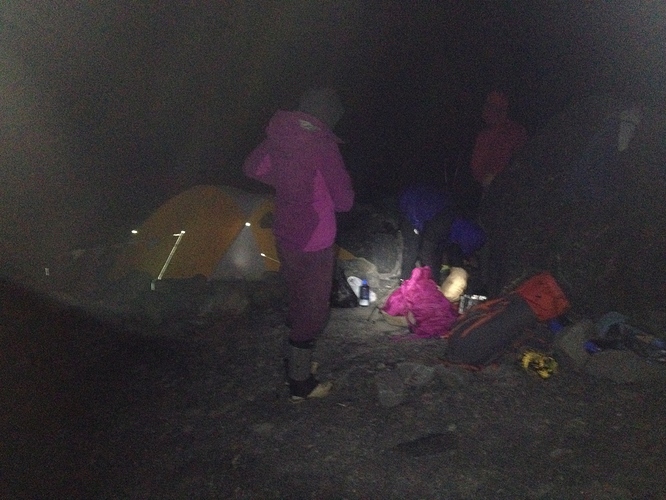 At 5AM we were on our way up the glacier. Due to the significant glacial retreat in the last decade we had a bit of 3rd class climbing to do before getting on the hard ice at toe of the glacier. By the time the sun came up we had passed the firn line and were approaching the crevasses near the Dark Wall. 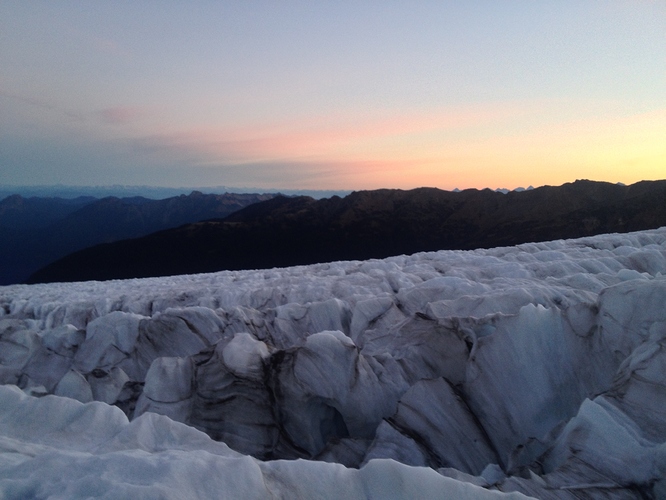 We roped up and proceeded to navigate the crevasses and icefall up the Coleman-Deming glacier towards the Roman Wall. 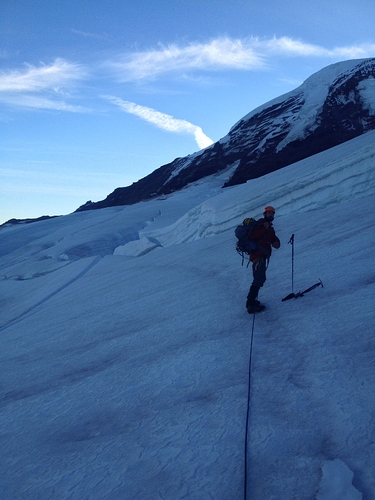 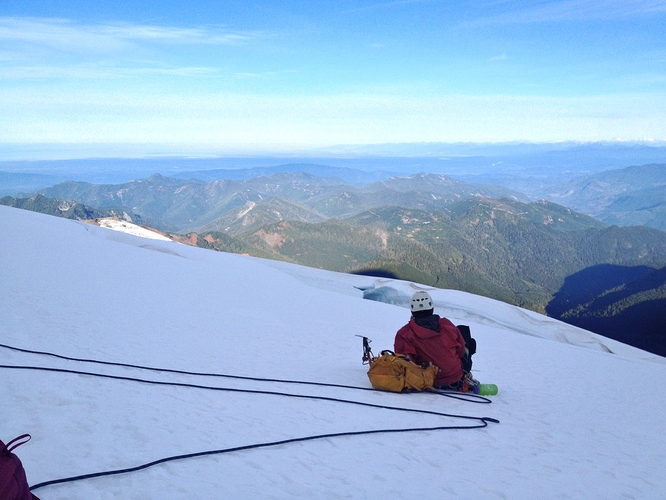 After moving through a dirt/rock patch we climbed the steep snow of the Roman Wall and popped onto the summit dome. Overall the ascent took us 7 hours. 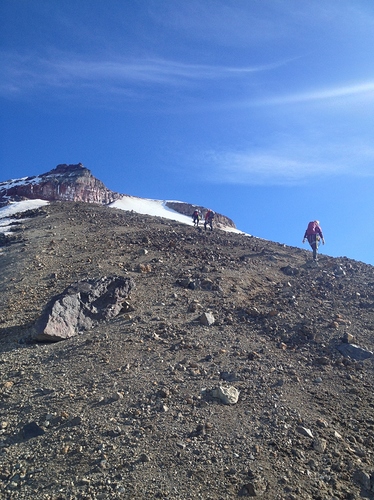 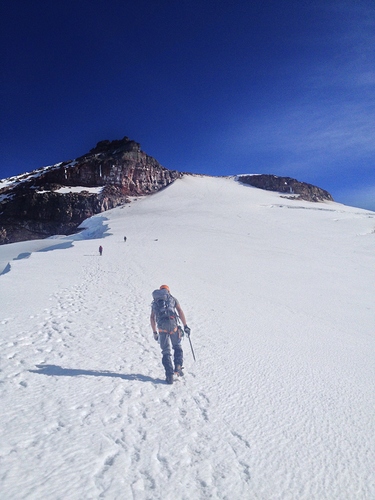 On to the activating. I had brought up my 2m/70cm portable (still working on a SOTA HF rig) which, given the elevation should have been enough for line of sight contacts with a huge area, however there’s a catch. Mt. Baker is a volcanic peak, with a summit crater instead of a classic high point. As you can see from the projections below, a horizontal difference of a few hundred meters, while still technically within the 25m activation zone, can dramatically affect VHF propagation. 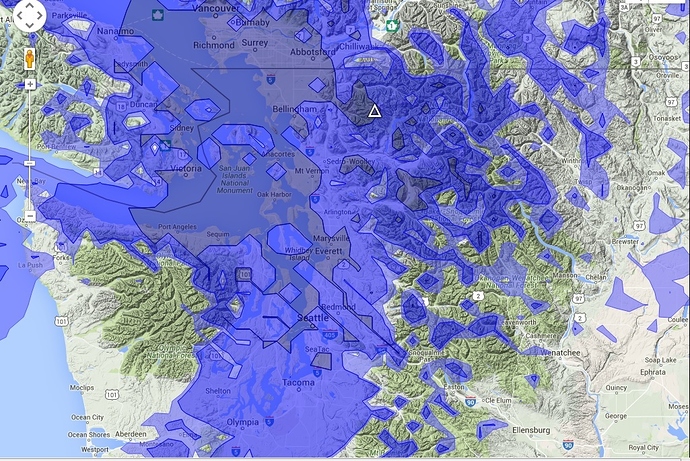 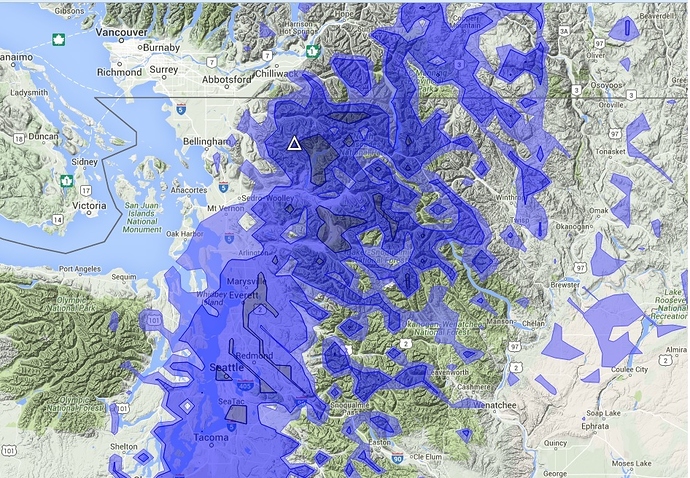 My first activating attempts were from the East summit ( and resulted in only one contact, Darryl WW7D on 2m. I could hear others on 146.52mhz but not clearly enough to make out a callsign so I moved to west dome and immediately started to make out clearer signals. Tim KG7EJT and Mark K7MAS were activating on a peak 130km south in King County (W7W/KG-031) and happened to be monitoring the national 2m calling frequency and it was great to pick up my first S2S contacts. About two minutes later K7LWA chimed in from SeaTac (Seattle airport) on a 6db beam antenna about 150km southwest from Mt. Baker. Usually I like to chat a bit from the summit, but the day was marching on and we still had to make it back to the car and then cross the border so I signed off and started the descent. 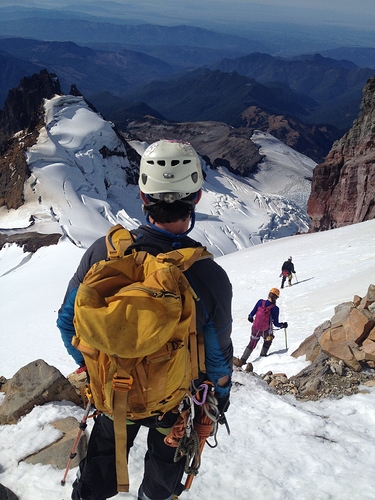 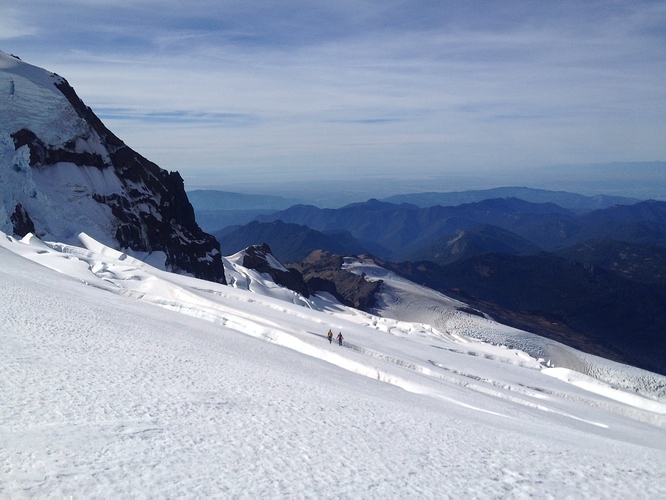 After a bit of careful footwork and glissading we found ourselves at an interesting snow and ice formation, and couldn’t help playing around a bit. 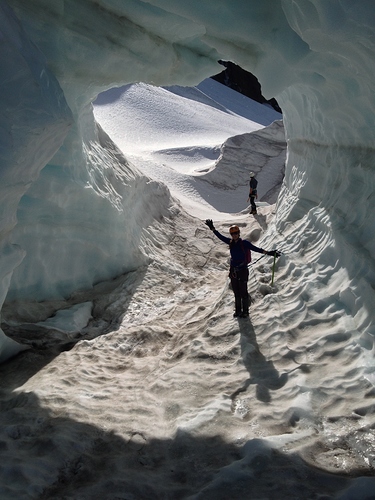 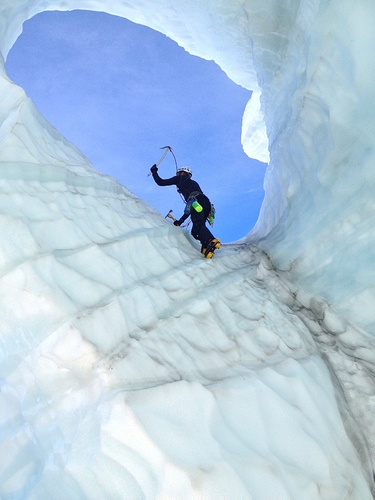 Going tent to tent took us 12 hours, car to car was 17 hours, and door to door took a whopping 24 hours. Overall it was a fantastic day with classic weather and great company. The SOTA community in W7W is pretty well established and I’m looking forward to activating there again soon. 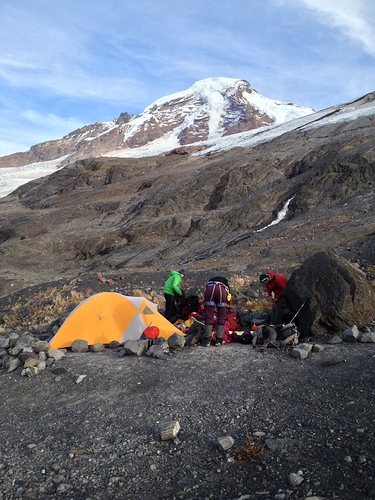 You can find a nice trip report from KG7EJT and K7MAS who scored a couple of S2S contacts on Cowboy Mountain (W7W/KG-031) here: http://www.pnwsota.org/blog/k7mas/2015-october-06/first-sota-activation-cowboy-mountain-king-county-washington-october-5-20

Wow! fantastic photos and great long walk!. Congratulations.
Good luck on your next one.
73 de Ignacio