July 12th was the 3rd day in a row I’ve been doing a SOTA activation during my summer holiday. I’ve been in Mt. Bailadora, which is at the very mouth of the Ferrol Estuary. 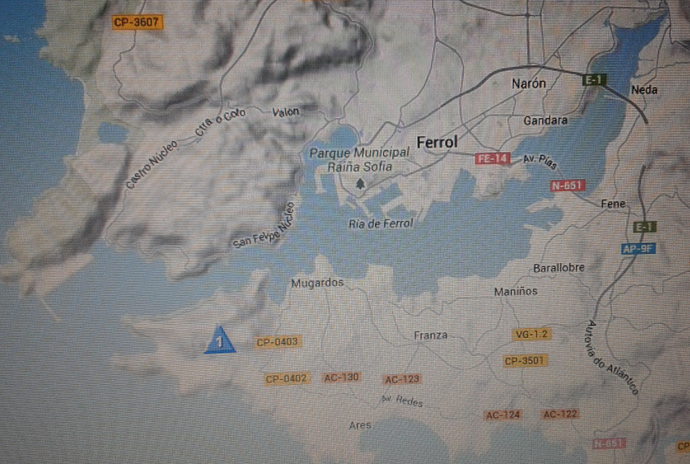 This is another drive on summit. There are several military facility and defensive canions remains as well as telecommunication towers, which amazingly didn’t cause any QRM on the HF bands I worked on. 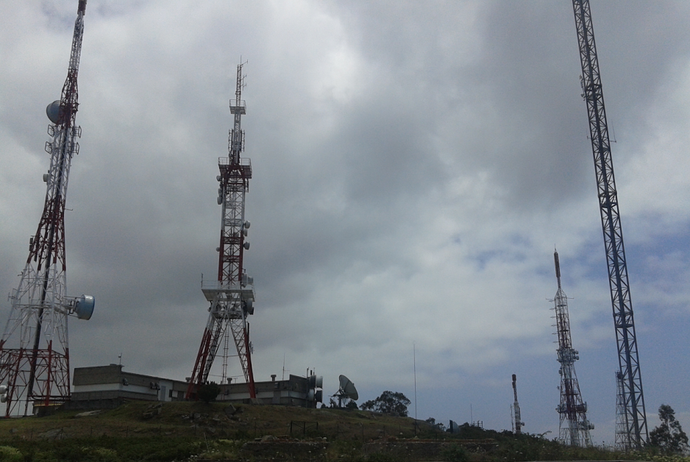 Panoramic views from this place are great. 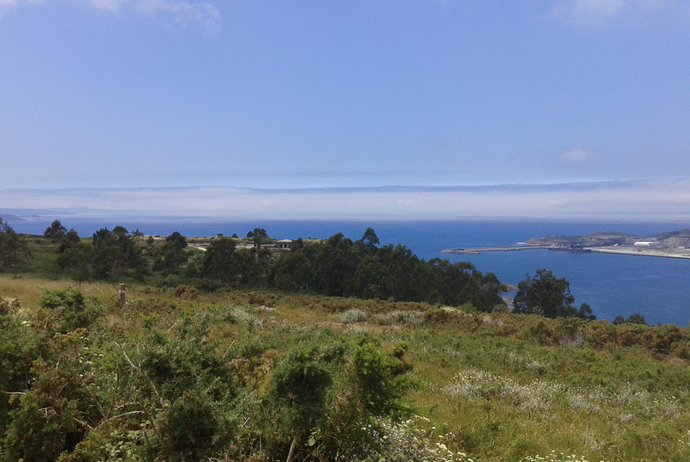 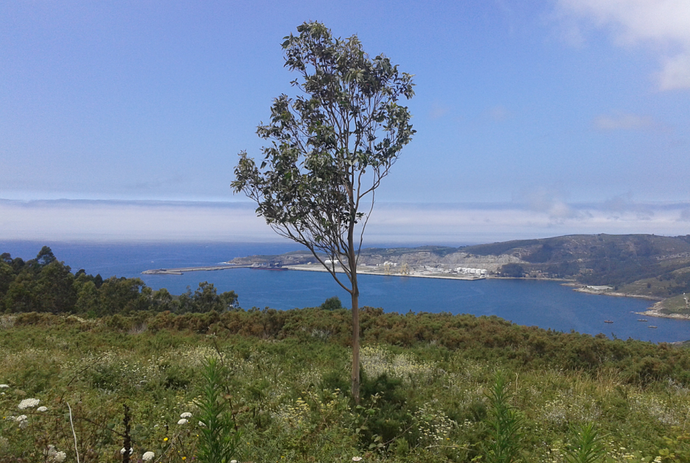 It took me some time to find the best place to set up and I finally did it here, with the 7m telescopic fishing pole in vertical and the home made endfed wire antenna sloping down to the operating place with the FT-817ND at 5 watts out. 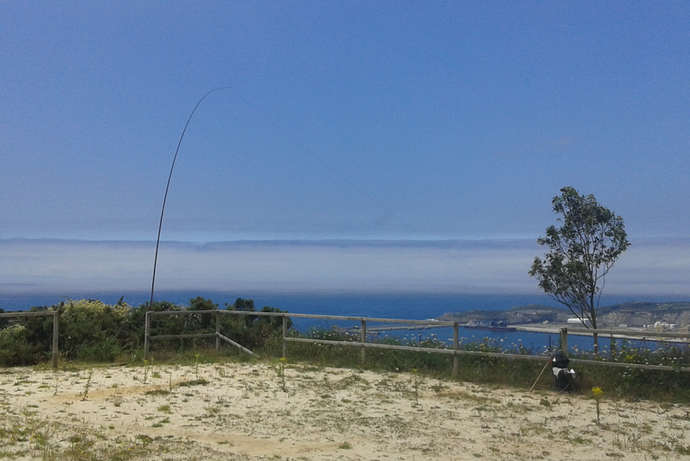 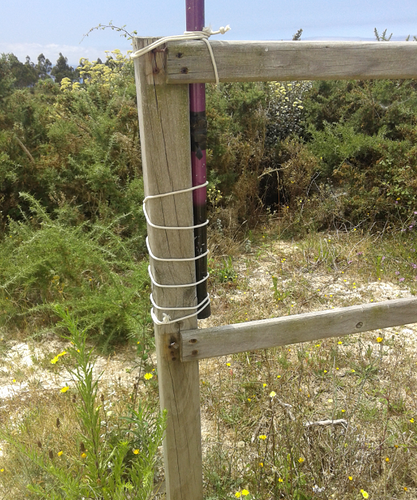 Here you can see the way I tied the telescopic fishing pole to the wooden fence post. 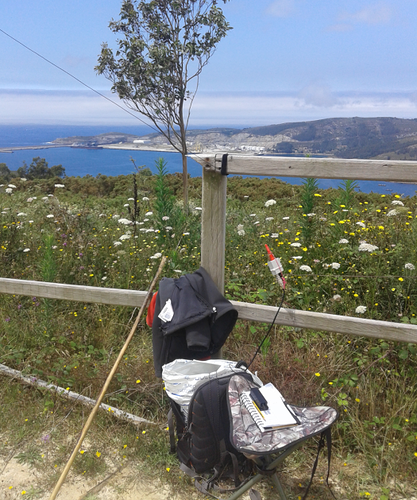 And this is where I carried out the operation.

I was going to QSY to 30m after a few unresponded CQ calls, but I saw on SOTAWATCH that an activator was on 20m CW and I decided to QSY there, which produced the 3rd S2S QSO of the day with F6HBI/P from F/AM-756.

At that time, SOTAWATCH showed that there were some activators working on 40m CW, so I QSYed there and chased F6FTB/P from F/MC-077 and DF7FX/P from DM/BW-361, which made the 4th and the 5th S2S of the day. Then I QSYed to a clear frequency and called CQ, which let me be chased and log 2 european stations.

At 11h54 and after a selfspot for 20m CW, I was chased by the first DX of the day, K4DY, then 2 European and another DX from USA. Thanks again to N1GB. One more chaser from Spain and no more chasers after this last made me QSY again.

This time, the SOTAWATCH spots led me to 20m SSB, where I chased 3 Romanian stations activating from a German summit. These were DL/YO2MSB/p, DL/YO6SM/P and DL/YO6FWM/P from DM/BW-228, the 7th, 8th and 9th S2S of the day.

At this point I saw on SOTAWATCH that Phil was on 40m SSB activating from Scotland as GM4OBK/P from GM/SS-225. After a single call, Phil picked me up and we completed what it was my 10th S2S of the day.

In my previous time on 20m CW, I had looked up on the spotted frequency of N4II/p activating from a W0C summit I don’t remember now, but I didn’t copy him. What I did copy was N4EX working him so, after having worked Phil GM4OBK/p on 40m SSB, I decided to get back to 20m CW in the hope of being chased by N4EX and possibly some other DX.

This is exactly what happened and after a new selfspot on 20m CW, I completed QSO with HB9CGA, then N4EX, as expected, then a great DX with JA8EAT, who surprised me very much because I didn’t expect such DX at that time and he arrived with excellent signals. He also copied my QRP 5 watts really well. Finally, 3 more European stations completed the log.

It was 12h45 utc (14h45 local) and I decided that it was time to QRT, pack up and descend, which I did after a few pictures from that nice and peaceful place.

I returned home with a big smile in my face. I can’t ask for any better after having worked all this with a home made endfed wire antenna and just 5 watts output power.

Who said propagation conditions are not good?

Thank you very much dear chasers for your calls and QSOs.

Hello Guru,
Very nice all your QSO and that JA DX… congrats.

Here is a picture of my shack at 2921m asl a very difficult summit to reach.
No room to set up a dipole or a long wire, and no GSM net.
Thanks for S2S.
73 from Gerald 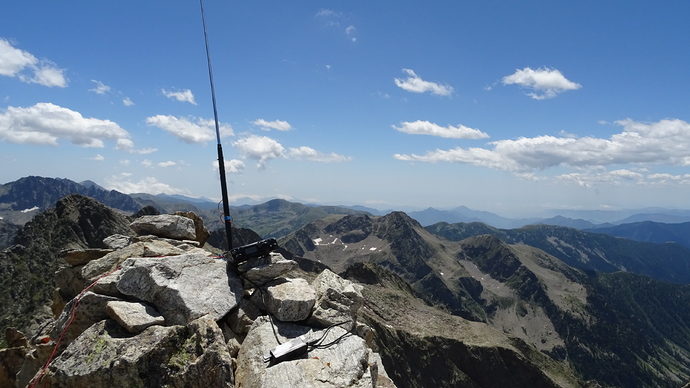 Thank you very much, Gerald, for our S2S QSO and also for posting the beautiful picture of your operating spot in that sharp and difficult rocky summit.
After S2S QSOs, it’s very interesting for me to see the other activator’s set up and operating places, as well as the different landscapes.
Thank you again and I’ll be looking forward to many more QSOs to come.
73,