Following with my target of activatng all SOTAs within a 35 Km radius from my QTH, I chose Arromendi for today. It’s 30.5 Km NorthEast of my QTH.
You’ll see its location with respect to Pamplona in the following image with the GPS track I used displayed right at the North of the village called Irotz on the map. 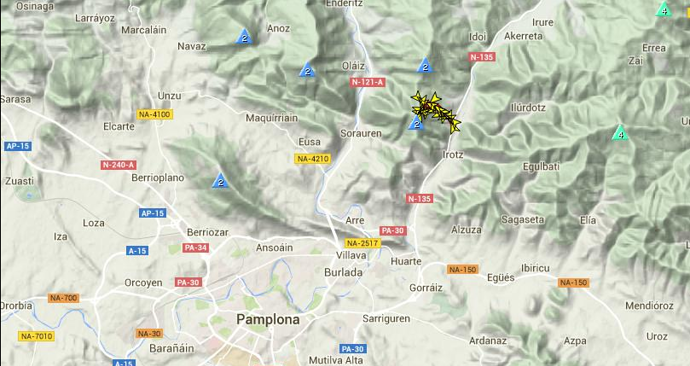 Here is a closer look of the GPS track I downloaded from Wikiloc and followed. It starts from the little village of Antxoritz, which is where I parked my car and started hiking by 7h30 utc. 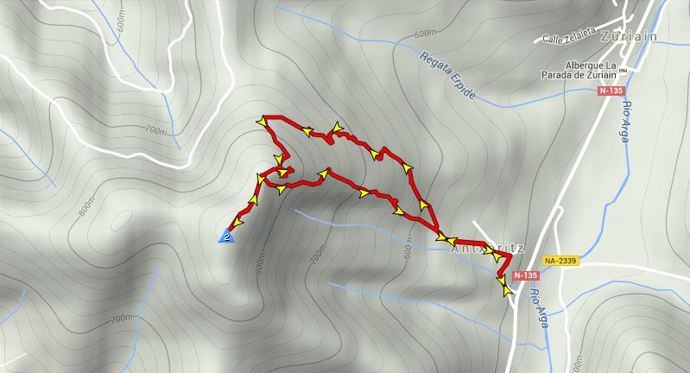 The morning was foggy and cold with a temperature reading of 2.5°C when I left my car.
After about 20 minutes hike I looked back and took this picture which describes perfectly what I just wrote. This may strike Andy as even closer to Scotland, hi, hi! 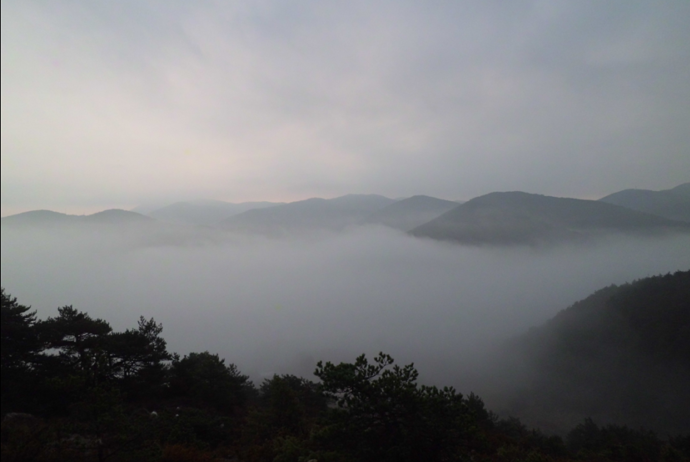 I was lucky to catch the sun just rising and briefly visible between the mountain edge and the clouds. 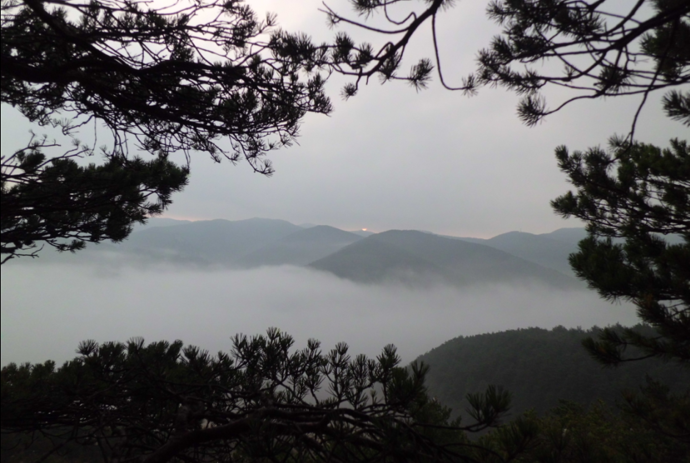 The path was narrow, sometimes very narrow, even difficult to hike with so many branches, bushes, and several fallen trees right crossing the path. 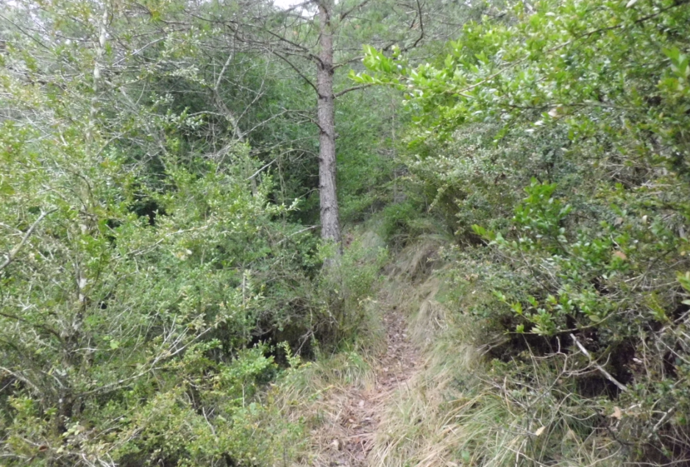 After an hour and 14 minutes ascent, we got to the summit, 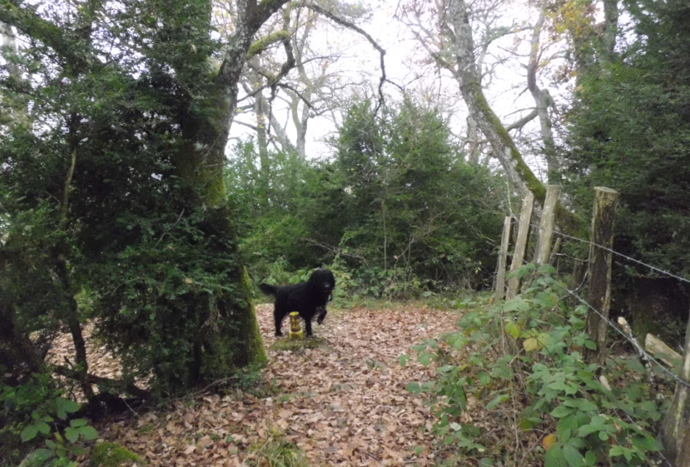 No cairn other than this yellow metal thing with a plate on it indicatiing the name and height of the mountain. 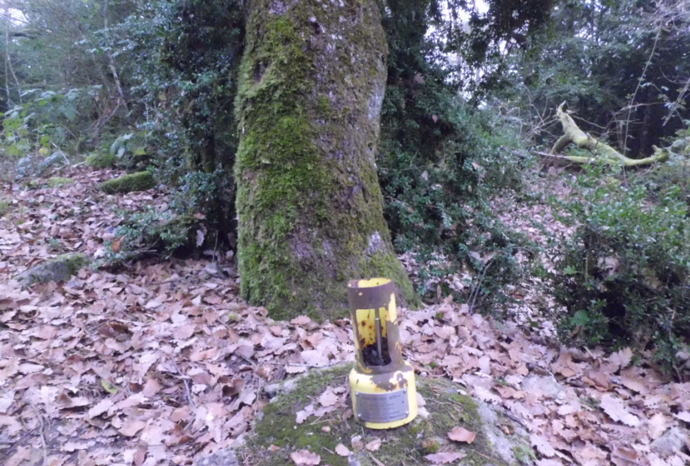 I quickly raised a selfspot informing that I was QRV on 2m FM while setting up for HF. Almost immediately Jorge EA2LU gave me a call on 2m becoming the first QSO of today’s activation. Jorge remained with me all the time helping me a lot with spots, informing about other SOTA activations going on at the time, finding and keeping clear frequencies for me. He was a great, great help and very good company today. I want to say a BIG THANK YOU Jorge EA2LU
The summit was in the middle of the forest so there were no views at all.
During the operation I was comfortably sitting on the fallen tree you’ll see on the top right side of the previous picture. Unfortunately I forgot taking a picture of the set-up or myself operating. It must have been the cold which kept my neurones in nearly hybernation, hi, hi!

With a spot from Jorge EA2LU, I started on 30m and I had a very fun pile-up after which I had logged 39 QSOs in 34 minutes.
Then I QSYed to 20m SSB. Jorge found and kept clear a frequency for me while I was slowly QSYing with my FT-817 and tuning my antenna. This band and mode produced 22 QSOs in 16 minutes, 3 of which were S2S with 3 different operators in the same Greek summit SV/TL-075. Thank you for your calls!
By the end of my time on 20m SSB I was fearing that my battery would die soon because of the cold temperature making me shiver and the voltage reading on my FT-817 display was fluctuating up and down but showing quite often 9.9V
Once the pile up dried up, I QSYed to 10m CW, where among Jorge EA2LU and Manuel EA2DT, the rest of the stations logged (3) were from Finlandia.
After a few more calls on 10m CW without response, I QSYed to 10m SSB, where I was again spotted by Jorge EA2LU and another Scandinavian station called me back. It was from Norway this time.
Then I got a call from Santi EA2BSB who had already worked me on 30m CW but now we had a very nice chat. I congratulated him for his complete. He had been the only activator of this summit so far and after chasing me, he got his only complete of this summit up to now. Congrats, Santi EA2BSB!
Finally Jorge EA2LU informed me of some activations taking place on 40m CW, so I QSYed there and had the pleasure to chase (S2S) Marcial EA2WX/P as well as F/HB9AMO/P and F6HBI/P. Thank you guys for your S2S QSOs.
I also had a sked with my friend Alf EA4CWN and he could finally chase me on 40m CW after having unsuccesfully looked for me on 30, 20 and 10m. Thank you Alf!

The battery was still alive but I was shivering and decided to close down and pack up for descent.
Before taking the full way down I decided to move slightly up to the North in order to reach the rocks called Peñas de Antxoritz, which are not higher than the summit but they are clearly out of the forest and provided great views with the fog being still there.
Warning: this spot is not recommendable at all for people having vertigo. Be extremely careful if you come here.

These are some of the pictures I took from there. 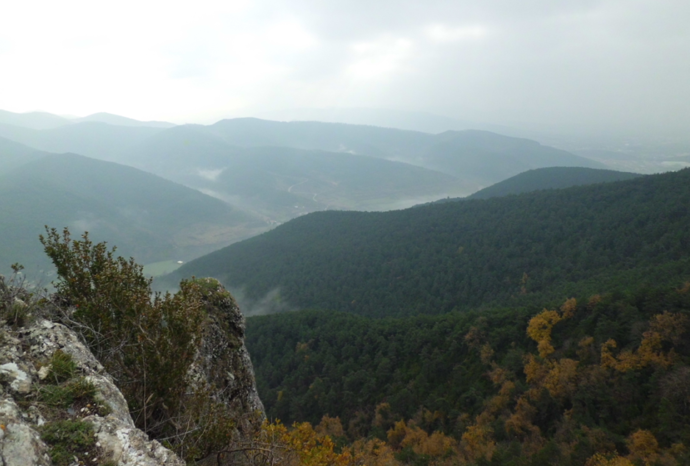 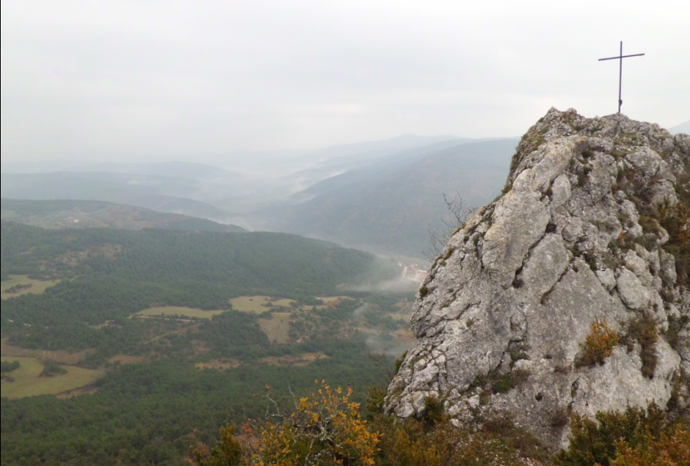 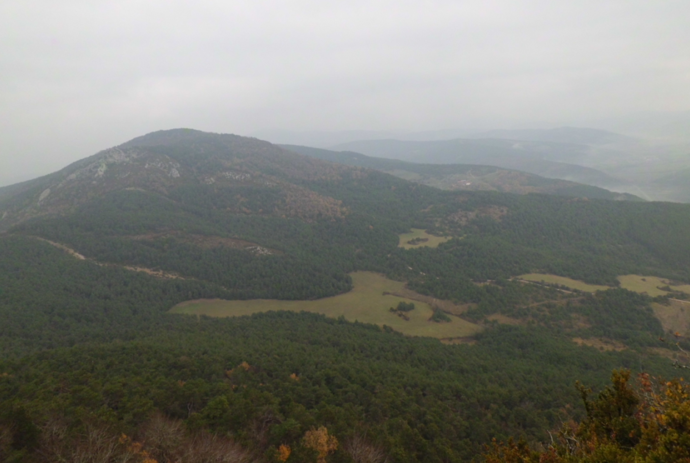 Finally, this is a picture taken on my descent with the little village of Antxoritz at the bottom. 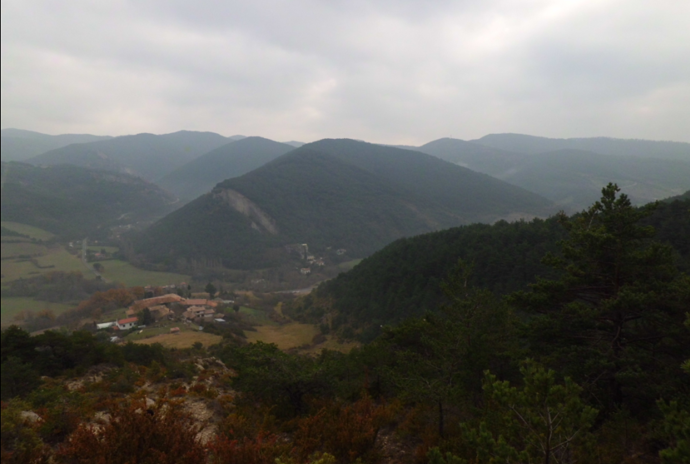 All in all, 74 QSOs in the log and 6 S2S. It was a cold morning, but I felt warmth in the company of all my SOTA friends. Thank you very much.

Hello Guru,
Very pleased to speak with you today and thanks for the report and photographs. Thank you for the summit. It was very good for you to have the support from Jorge EA2LU - every time he is a huge signal here. Today there were many jobs to do but the weather has been very bad here, rain and strong wind, so that was my excuse to play radio

Very well done Guru, and thanks for another detailed report.
Glad to catch you during a busy morning.

Take care and look forward your next one.
VY 73 de Ignacio

Have to agree with the comment on Jorge EA2LU having a great signal and on the support he provides to SOTA activators - he was a very easy copy when I activated VK1/AC-035 on Saturday night and helpfully asked me to listen for Guru’s signal (good to get you in the log also Guru). Apologies for not being able to recall everyones names when working through the pileups - there are some who I definitely should remember, but most just blend into the never ending stream of callers!

Hi Matt,
Yes, it was very nice chasing you the other day in VK1/AC-035. No problem for not recalling the names. It’s absolutely understandable.
In my case, it’s just now after 2 years of SOTA activity that I’m starting to recall just a few of the regular chaser and activator’s names.
I’ll be looking forward to chasing you again soon.
Best 73,