I had the week after Christmas off this year and I wanted to get out for at least an overnight trip if possible. The weather forecast wasn’t looking great for the southeast, but I reached out to my backpacking buds to see if any were available. Andy @twistytee was a possible for Tuesday/Wednesday, but the only opening for dry weather was on Monday/Tuesday. My last two trips have been on the ‘moist’ side and I really did want a break from the rain. So, I took the opening and went ‘solo’ on this trip. Solo in quotes because it is rare these days to not share the trails and campsites with other folks. Not a bad thing at all and you always run into interesting people in the woods.

Not that I have any expected completion date, but I have been busy ticking off trails for the Smoky Mountains 900 miler challenge. I did many miles in the Smokies back in the 80s and 90s but this has been a great incentive to revisit familiar places and tackle a few new trails. I have never hiked the infamous Baxter Creek Trail before and always wanted to see if it lived up to it’s reputation. I have had this overnight loop planned in CalTopo for some time, so it was an easy choice.

Since it was not a long hike up the Baxter Creek trail to Mount Sterling and campsite 38, I didn’t have to get out super early for the 2.5 hour drive to Big Creek which was nice. Weather was unseasonably warm for late December with highs in the low 50s and lows in the upper 40s at elevation. Down in the lowlands, it was going to be pushing 70 degrees! I parked at the Big Creek Ranger Station and was surprised to see this throwback to an earlier era. Turns out that it is really just a hotline for several national park phone numbers, but nice to know since there is no cell phone coverage here. At least I could contact someone if I came back to my vehicle and the catalytic converter had been removed… 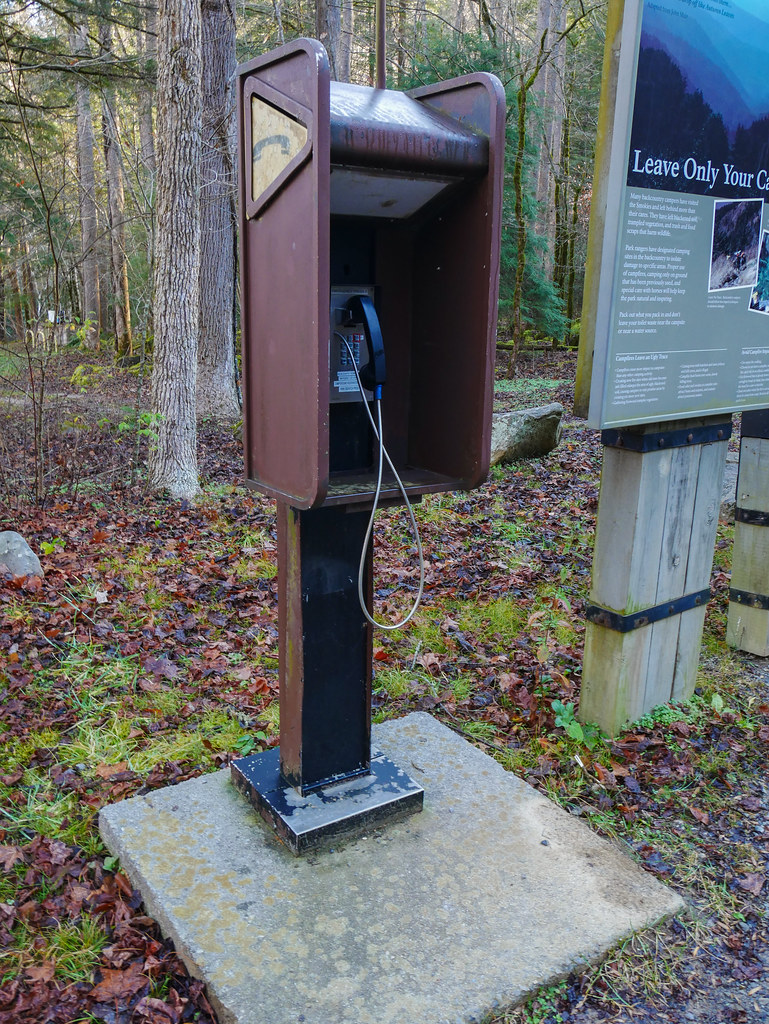 I walked down the road to the picnic area, where the Baxter Creek trail starts by crossing Big Creek. 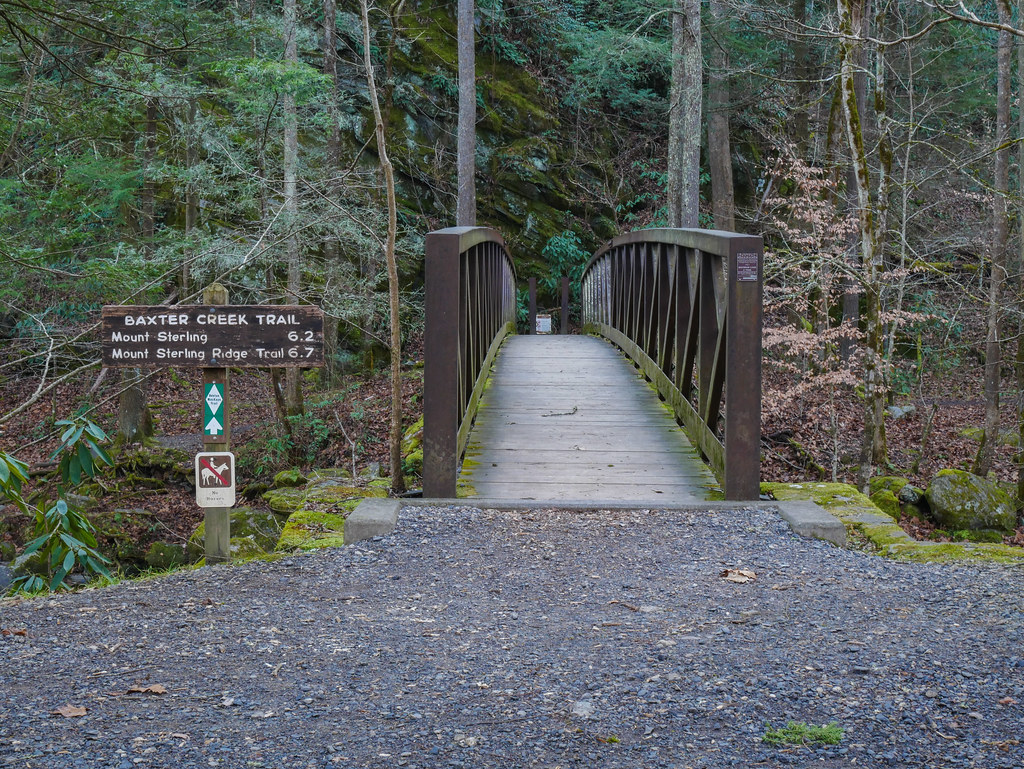 And so it begins… by Patrick Harris, on Flickr 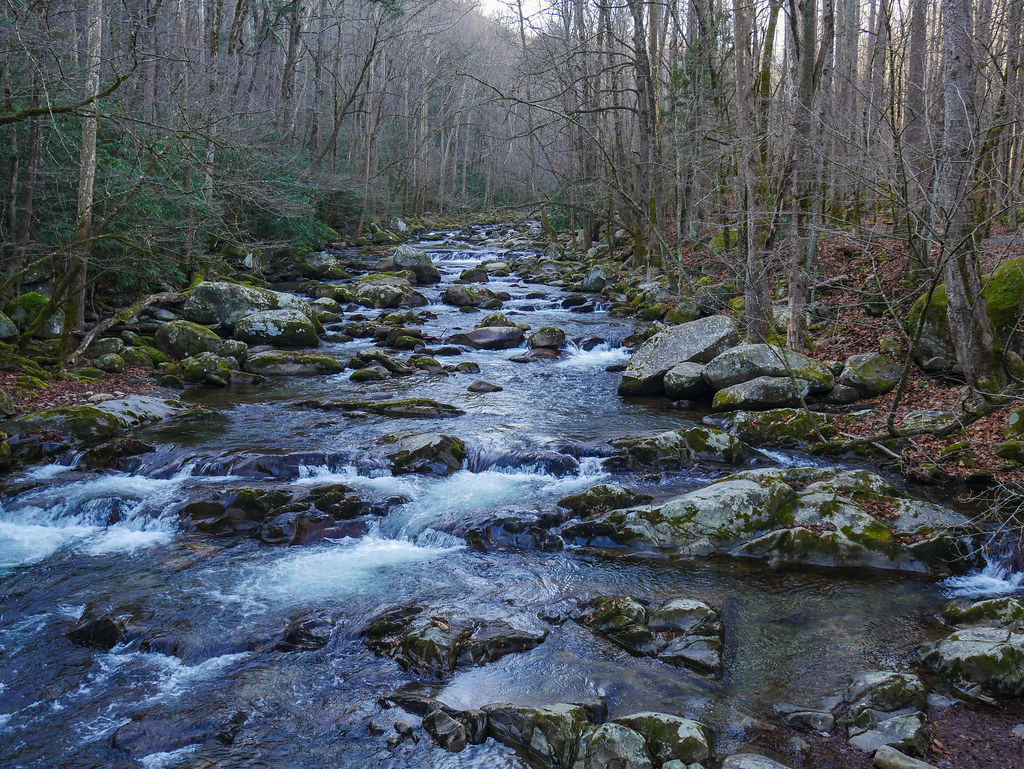 For the first three-quarters of a mile or so, Baxter Creek trail climbs gently before starting the actual climb, where it packs in most of the 4200’ of elevation gain in about five miles. It never really exceeded a moderate grade, but was a continual grind all the way to Mt Sterling. It is a lovely trail with great scenery and I took my sweet time going up and took lots of pictures. It starts by following a rocky escarpment above Big Creek before climbing the Baxter Creek drainage to the ridgeline. 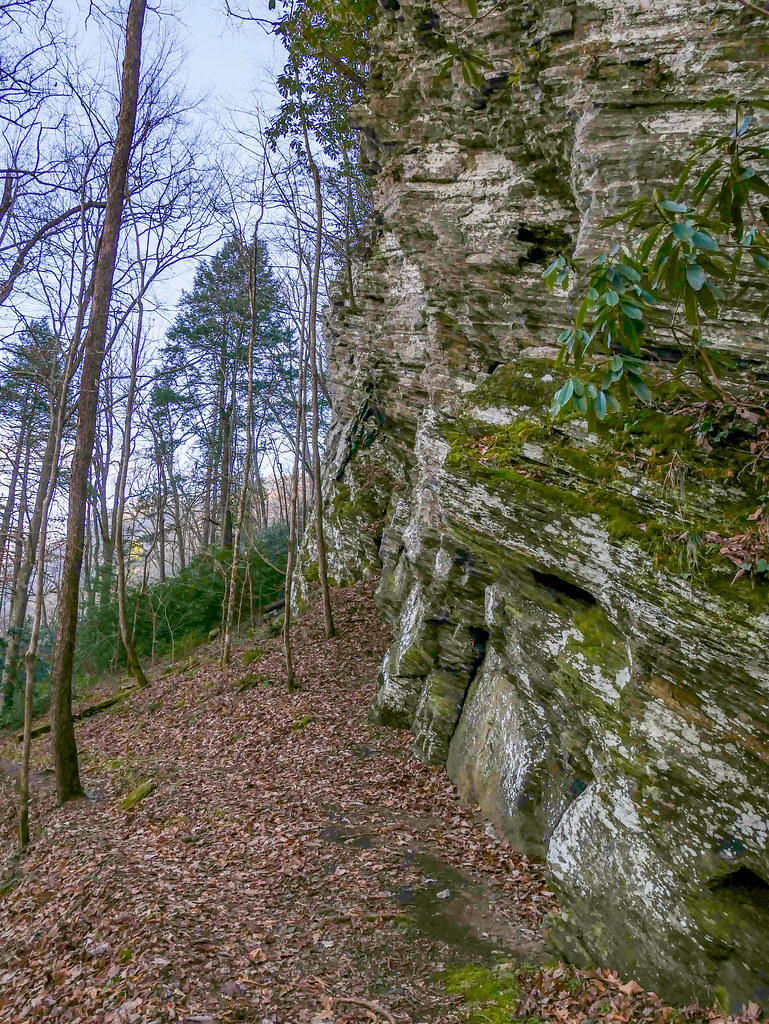 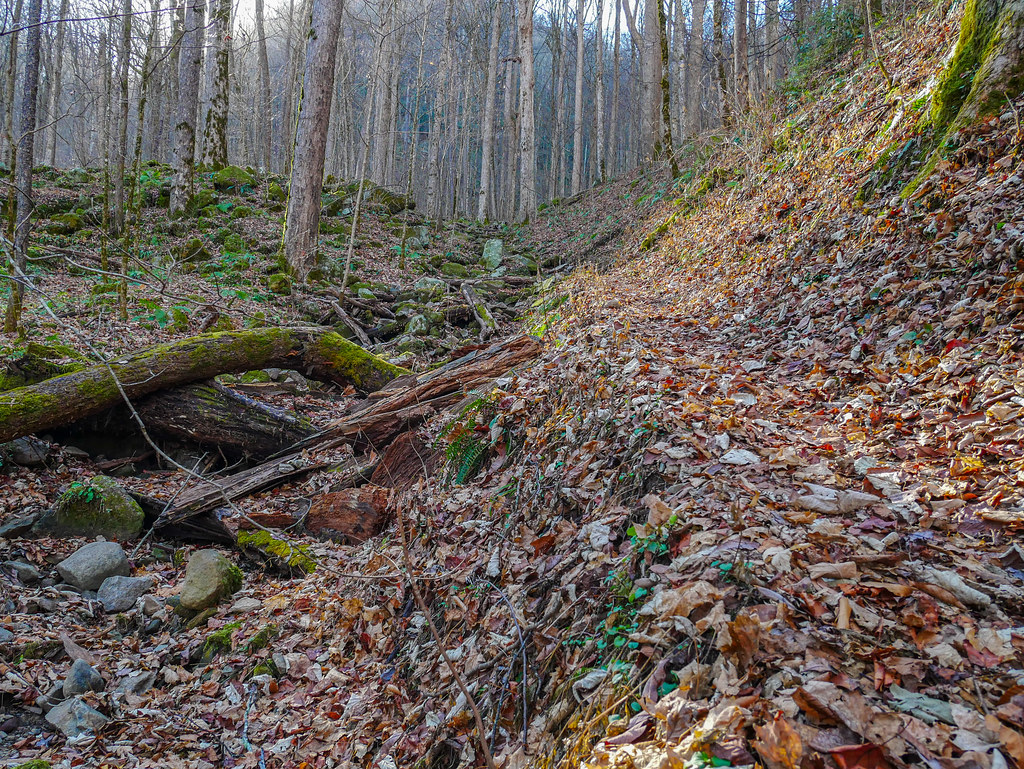 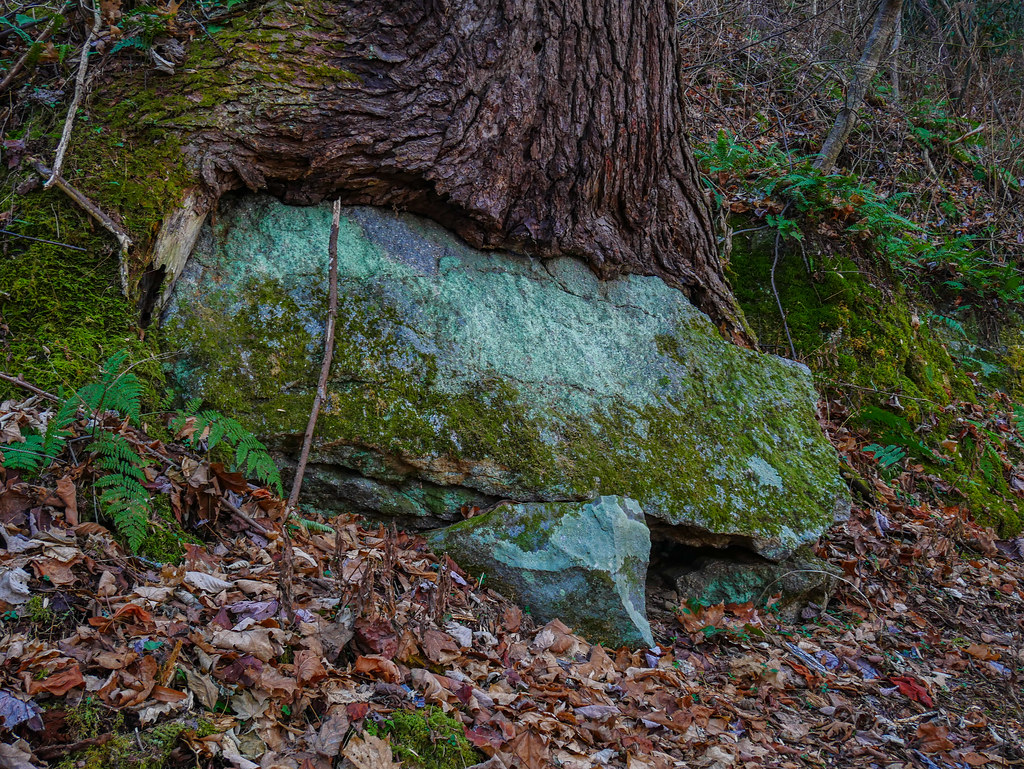 The weather has the poor Rhodendron confused and it thinks it is springtime. 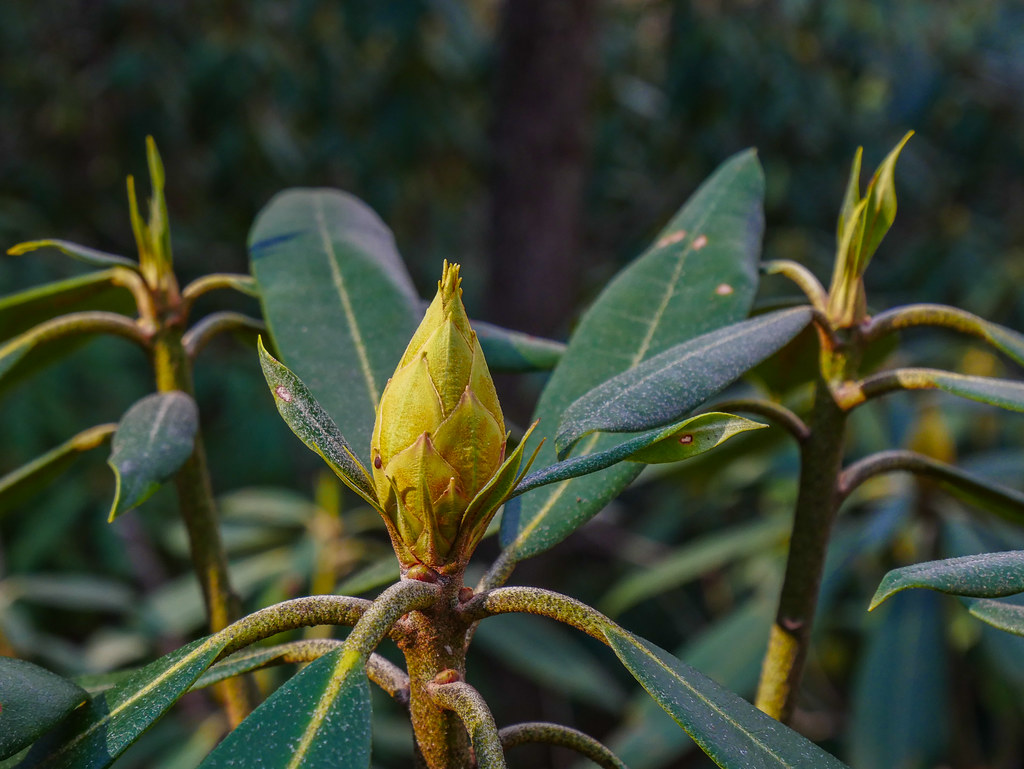 Poor Rhododendron is so confused by Patrick Harris, on Flickr

Once you reach the upper elevations and the ridgeline, you enter my favorite part of the southern Appalachians – the spruce/fir forest which is a relic from the last ice age. Everything is covered by a blanket of moss and the trees have that wonderful Christmas tree smell. 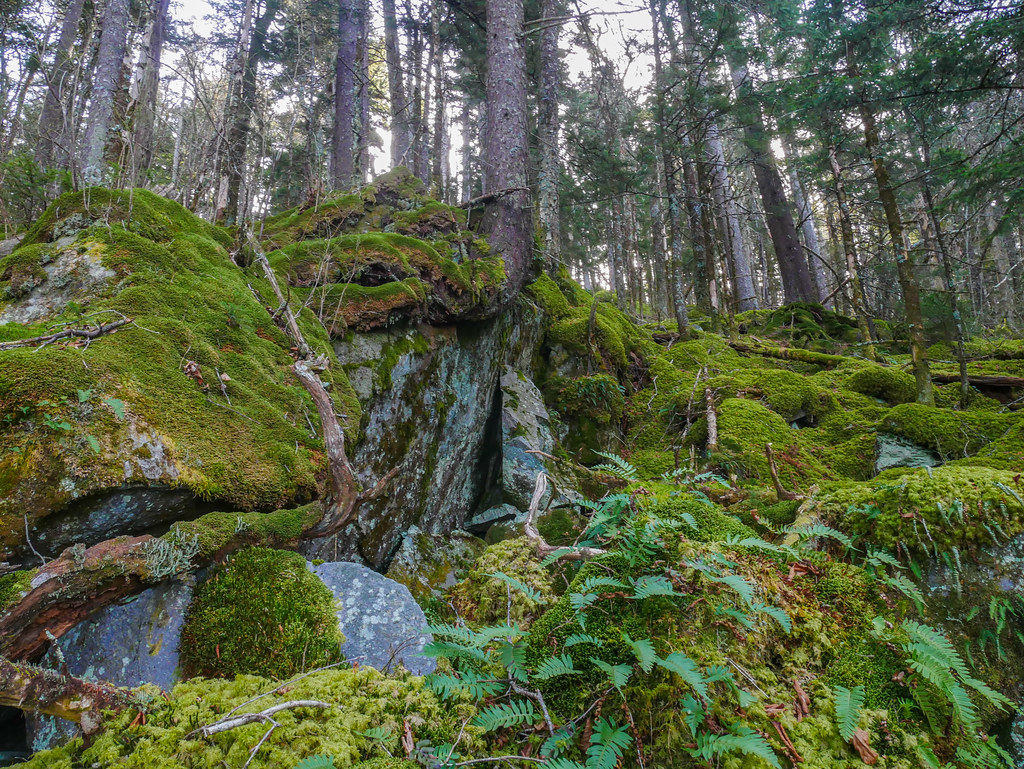 You pass the trail to the water source for Mt Sterling about a quarter mile from the top, so I went ahead and tanked up for the night. I had already finished the liter of water that I had started with and failed to get a refill at the last viable source on the trail, so I guzzled down an ice-cold liter for starters. I fiddled around with the pipe trying to improve the flow, but made it worse initially before getting it to flow well. 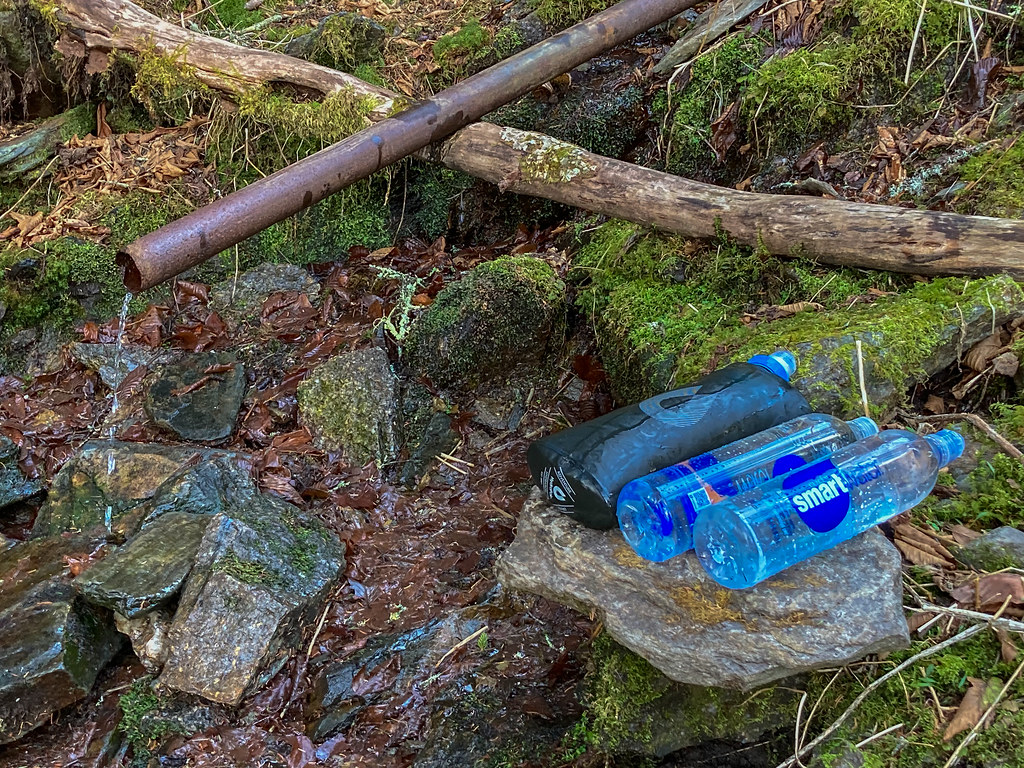 Mt Sterling is a great campsite for hammocks with tons of trees to choose from. As I set up camp I also setup my radio and made contacts all around the U.S. before dinner. The old MTR-3B is a great rig for backpacking. Mine is set up for 40/20/17 and I rebuilt an old PAR TrailFriendly EFHW and put in a link for 17 meters. 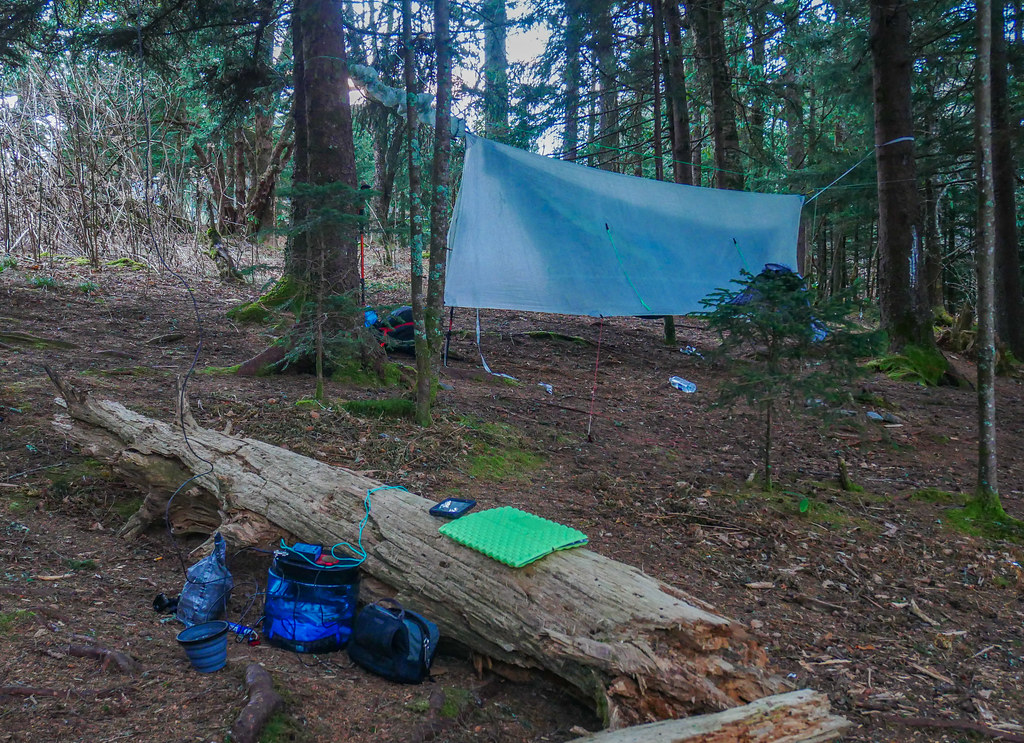 There were five other folks camping and we enjoyed a nice campfire, dinner and conversation. After dinner, I went back and played radio for a little while longer in the dark. I made a contact into Japan so that made this old geek smile. Thanks for another evening contact @JH1MXV! 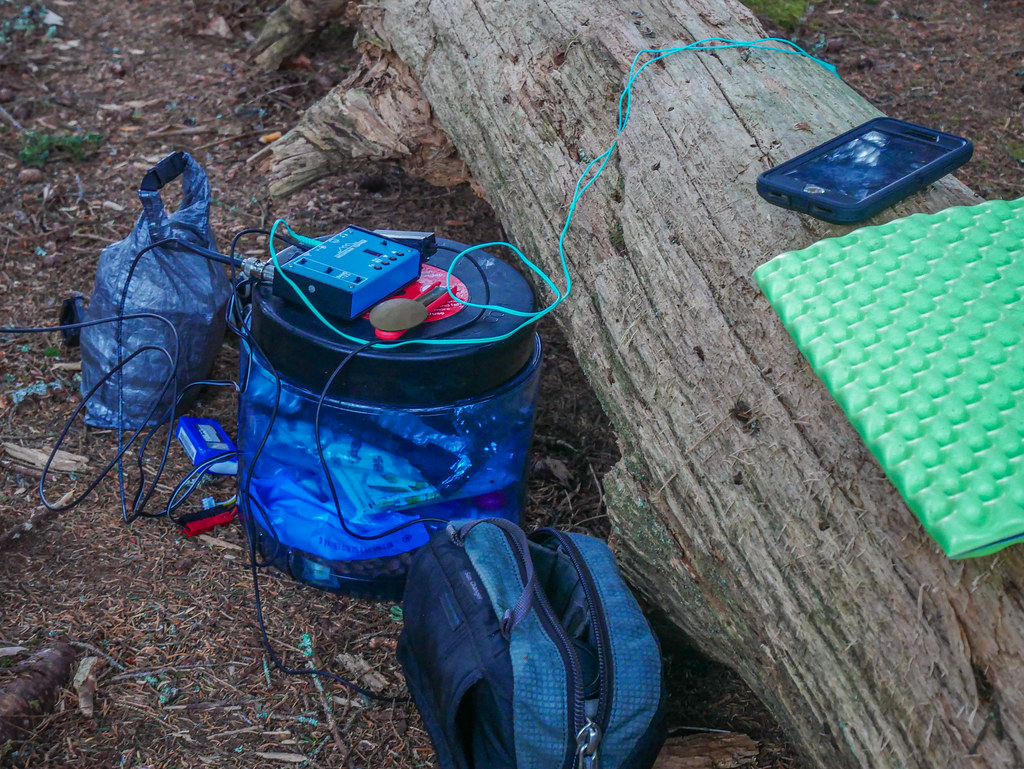 I should have listened to the mountain-forecast.com report for the area, but I brought my 20 degree quilts instead of my 40s. It only got down into the upper 40s and even with a steady breeze, I was quite warm. Overall, it was a nice, quiet night on the mountain top. The next morning, I soaked in the sunrise from the firetower. 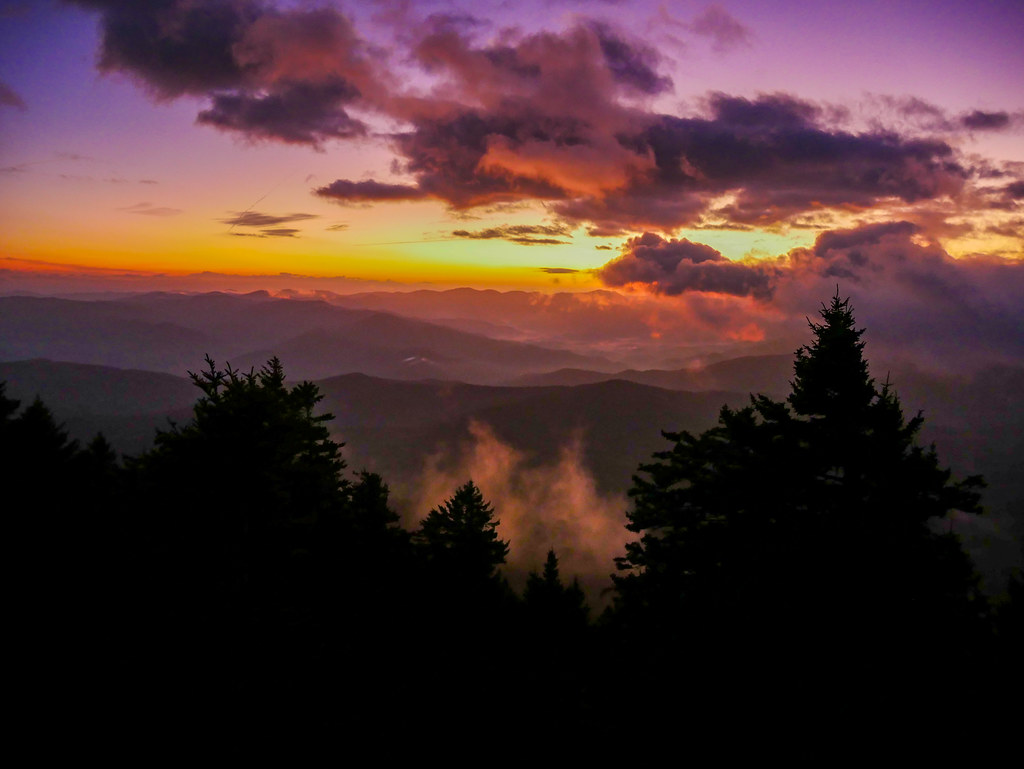 Sunrise from Mount Sterling by Patrick Harris, on Flickr

There had been clear skies all night long, but as the sun came up, the clouds started rolling in. 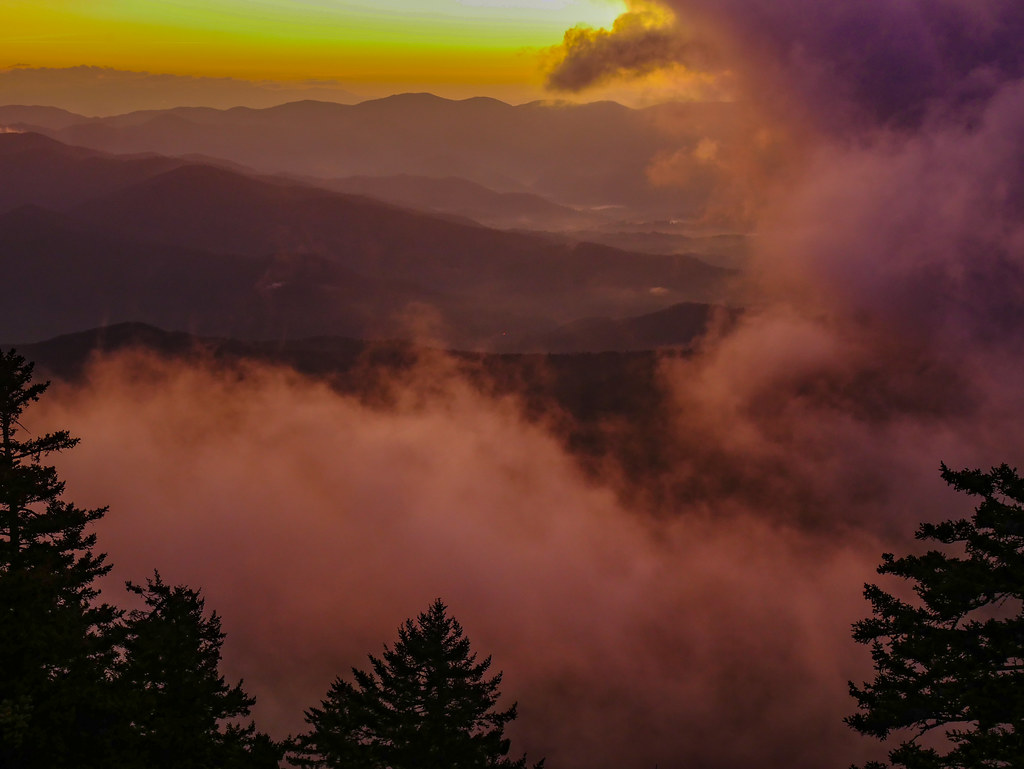 Sunrise from Mount Sterling by Patrick Harris, on Flickr

After playing on the radio a little bit more and making contacts all around Europe, I packed up and started the long hike down. One last stop at the overlook to admire the cloud bank! 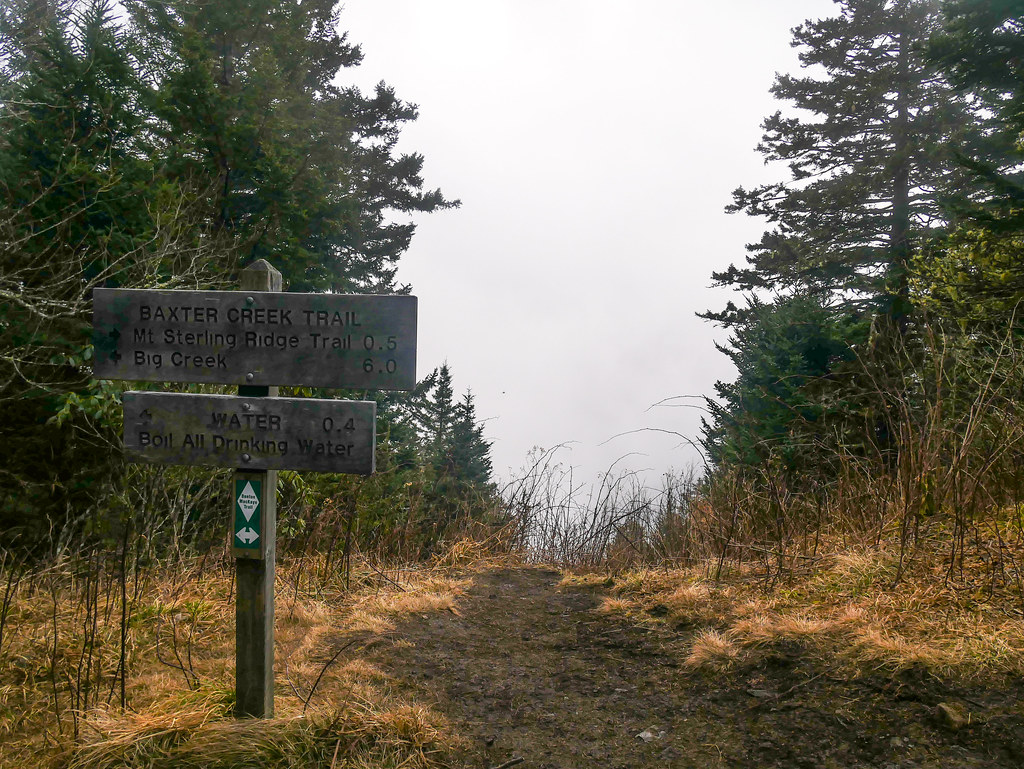 Sorry, no views today by Patrick Harris, on Flickr

The Sterling Ridge trail descends gently down the narrow ridge most of the way to Pretty Hollow Gap. There were plenty of signs of wild pig activity along the ridge as expected and several hog wallows. 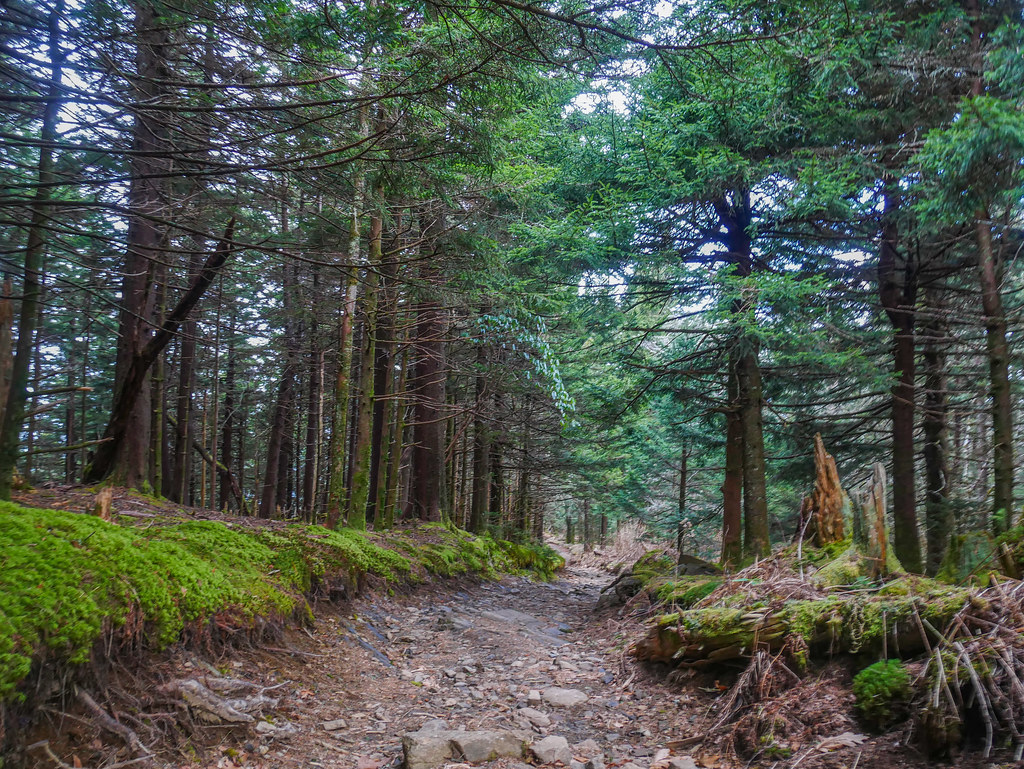 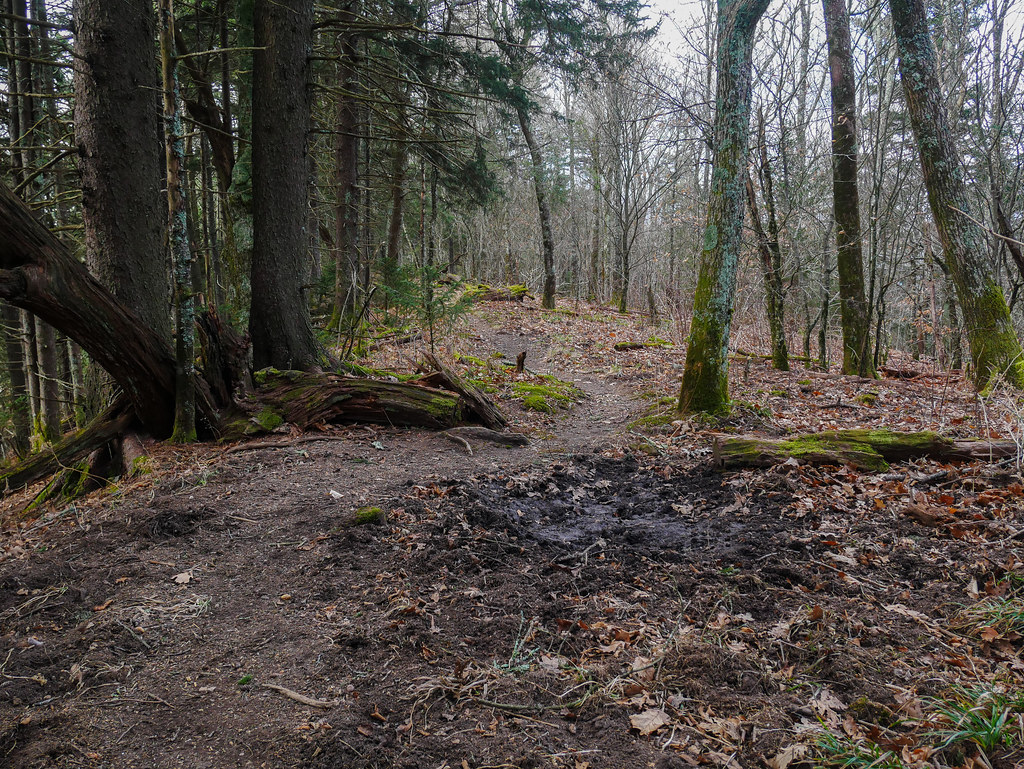 At pretty hollow gap, I turned right on the Swallow Fork trail and started the real descent. I was expecting a steeper trail, but it was instead a nice grade all the way down to Big Creek. Swallow Fork is a very pretty creek with almost continuous cascades over small rock shelfs so there was plenty to look at on the way down. 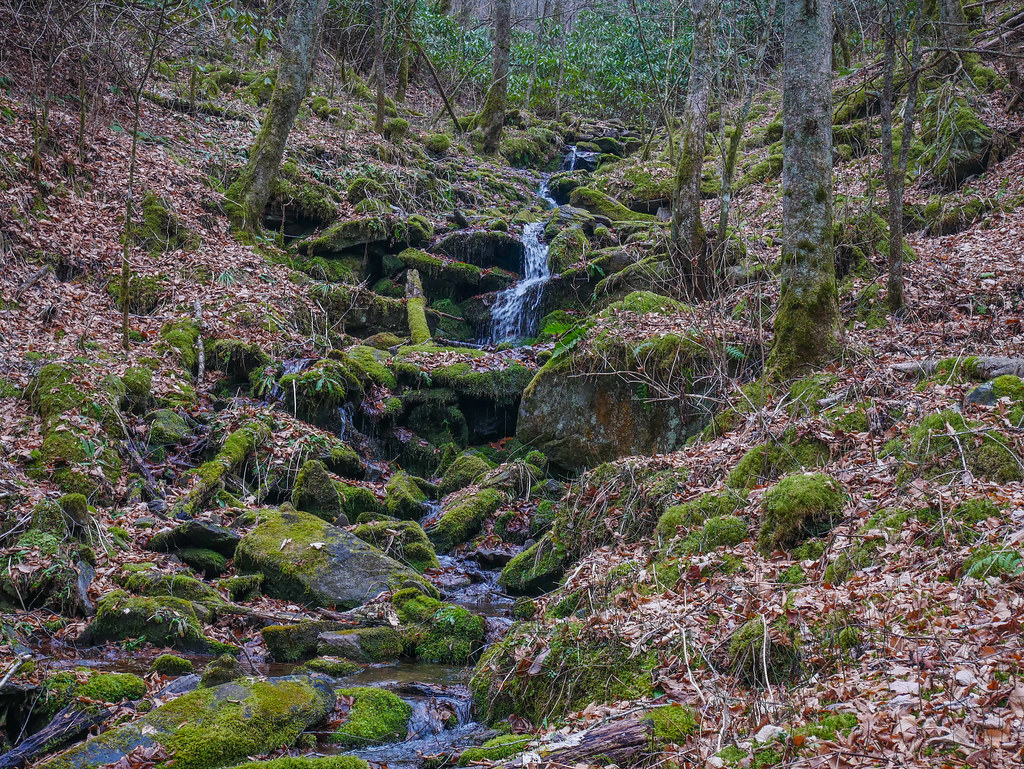 I heard that Afros were coming back in style but this is just crazy! 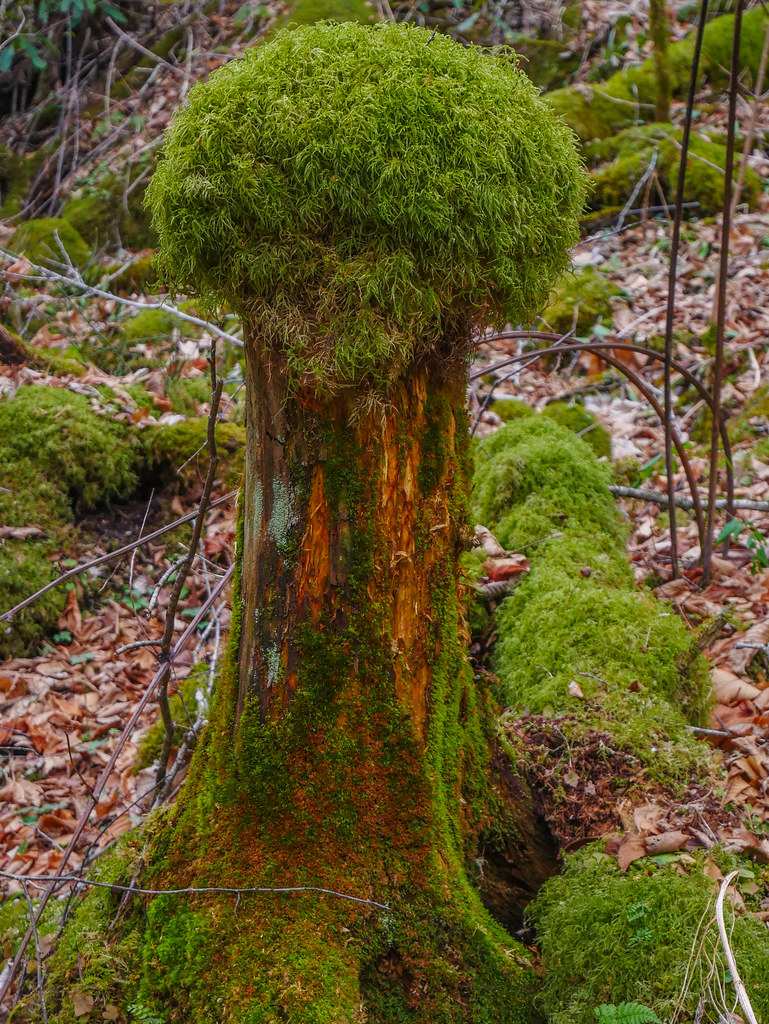 I heard that Afros had come back into style… by Patrick Harris, on Flickr

Off and on, it kept threatening to sprinkle on me on the way down, but I think it was just the mountain tops tickling the clouds. After meeting up with the Big Creek trail, I started the last leg of the trip. 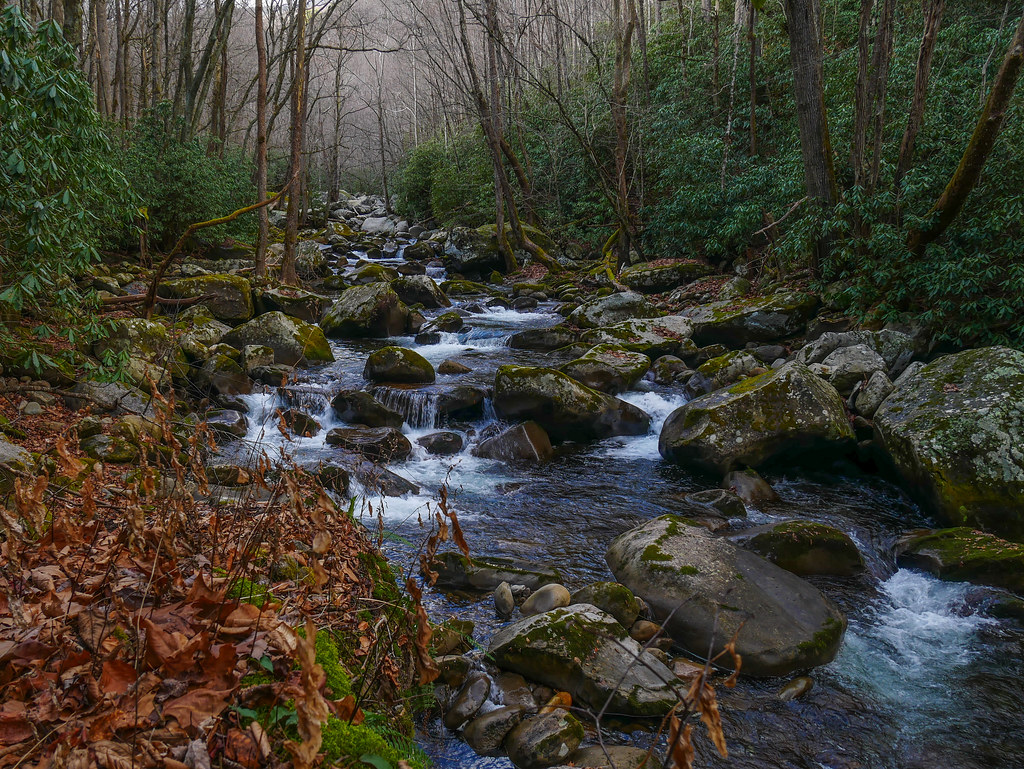 Big Creek is a beautiful creek with big boulders, but I wasn’t looking forward to the next five miles. Very gradual elevation loss, but a hard and rocky roadbed all the way back to the picnic area. After a few miles, I took a relaxing lunch break on the creek before wrapping the last couple of miles. 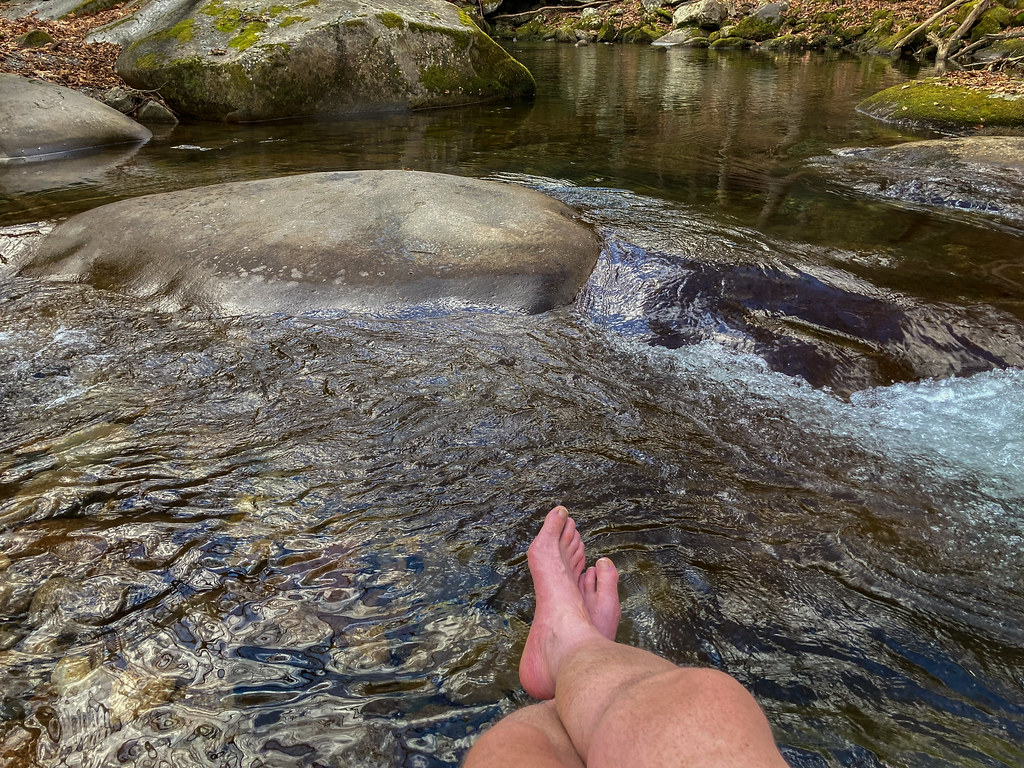 Breaktime on Big Creek by Patrick Harris, on Flickr 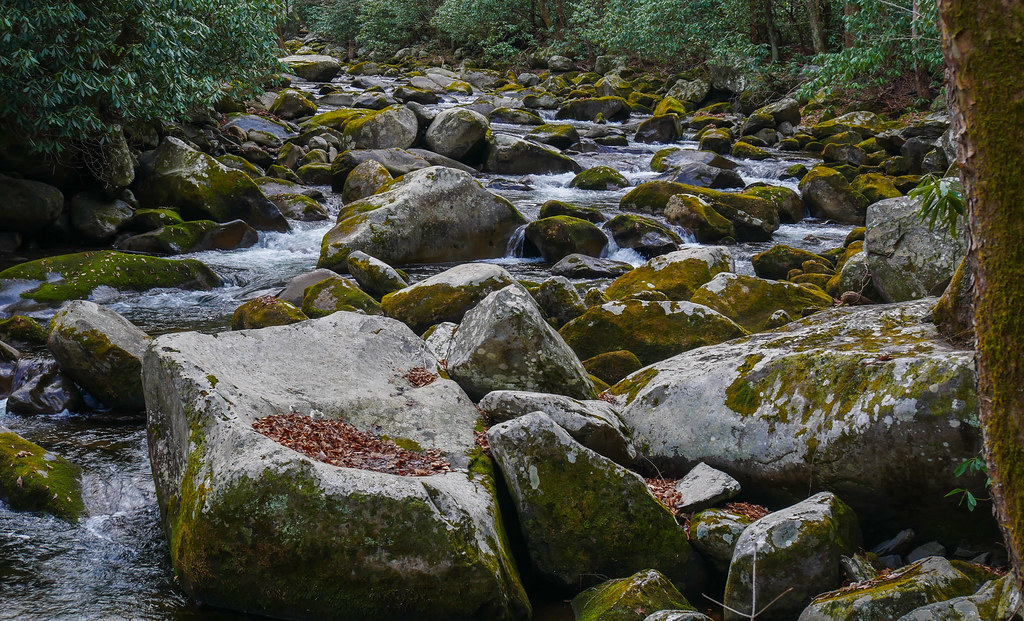 As the forecast predicted, the rain started later in the afternoon as I was driving home. My plan for a dry trip succeeded for once and I was able to add Baxter Creek and Swallow Fork to my list of trails hiked in the park. The rest of my pictures can found here - https://flic.kr/s/aHBqjzwGGZ

Pat, thanks for sharing your adventure. Your pictures and comments brightened my day. I wish you many more to come. 72, Mike

Thanks, Mike! Our backpacking trips have added another dimension to SOTA for me that I am really enjoying. Scott @KW4JM, Dean @K2JB, Andy @N4LAG and I have been on a lot of great backpacking adventures in the last year and a half. It is nice to be able to share a little bit of what it is like on the other side of the contacts. I always look forward to seeing your call in the log!

Hi Pat, thanks for your activation report with fantastic photos. Well done

Cheers and HNY to you -

Thanks for the report Pat. Good stuff!! I was at work that day, so sorry that I missed you.