For quite some time I had been the only active SOTA chaser in GI, however just like buses, after waiting for a while along come several at the same time!

It’s great to hear more activity from GI chasers and recently we have had 2 new shack sloths, firstly Ian GI0AZB and then Martin MI0RTY. Congratulations to both. Also, Esther GI0AZA and Syd MI5UTC have joined the GI chasing gang and of course Esther and Ian have been seriously bitten by the activator bug.

To all of the above, (and others), I did try warning you that SOTA was addictive with no known cure, but, thankfully you didn’t take heed

Well done on carrying the SOTA flag Victor and congratulations to all those mentioned on their achievement. Hope to cross the water next year for a few activations in GI and EI.

Thanks Victor for the congratulations !

My very modest station was only VHF/UHF and 4 meters, having sold all HF equipment back in 2008.
In 2016,I thought about setting up HF again to help my Sota chasing, but it nearly didn’t happen with an uncooperative neighbour not wanting a 20 foot pole attached to his fence.

However in July, MI0JST suggested an inverted V arrangement which wouldn’t require any poles. After an initial test for QRM using his Sota set-up, a plan was developed. An old G5RV bought in 2003 was used initially, thanks to JST for the loan of his Kenwood TS480, my HF chasing began. The antenna was changed to a Carolina Windom 80 soon after.

Due to local interference from the usual urban suspects, I have a lot of noise at my QTH, all contacts are hard fought, usually with the aid of headphones.
My last 500 points were all gathered from 3rd August on HF.

Many thanks again to MI0JST for advice and equipment loan and to GI4ONL for advice, encouragement and many heads up on activations.

I cannot recommend GI SOTA activating highly enough. There’s a bit of everything - serious mountains, forests, moorland, rolling hills, ridges and a handful of “almost-drive-to-the-top” summits too. Each region has a distinct character, but each is worth visiting and enjoying in its own right.

Add to that the people, pubs, restaurants and spectacular coastlines, and you’ll see why GI has become the favourite association of even the G Association Manager!

The topography of the whole of Ireland is significantly different to the UK in that there are considerably more “gaps” between all the hills for signals to get through. I first noticed this in the days before I was licensed. I would park up at high spots and do some VHF broadcast band DXing and was surprised to be able to pull in stations from the length and breadth of the island from wherever I was. This means that it is often worth giving 2m FM a try from the summits. Activity levels aren’t particularly high, but when a contact does come through it can often be from a surprising direction and distance.

Great stuff! Dave G3TQQ and I are going over to some of the Mournes in October so we hope to work all the new GI SOTA chasers while we are there.

Great stuff! Dave G3TQQ and I are going over to some of the Mournes in October

I have yet to activate in GI, but I’m hoping to fit in a couple of days SOTA-ing in Wicklow EI/IE in October, most likely Tuesday and Wednesday 11th and 12th.

S2S would be good if dates coincide. I’ll try to alert nearer the time…

Hi Adrian
Alas Dave and I are in NI 20th - 23rd October. However, Dave G3TQQ, Victor GI4ONL and I are in Snowdonia 11th - 13th October so hopefully we will get some s2s with you from there. You will love the Mournes, MM-001 and MM-002 make a very good day out from Newcastle County Down.

I remember you telling me you’d been blowing SOTA’s trumpet out and about and it does seem to have brought new people into both chasing and activating. Well done on stirring up some more interest Victor and it’s a pleasure to find so many more GI stations out chasing. And activating in Ian and Ester’s case. Welcome, all of you .

It also looks like GI is a the current “go to” association for UK stations who are not making a SOTA trip to OK. I’d nip over for a few summits myself but all my 2016 vacation days are now booked or used up… sniff!

Well done Victor on kindling interest in SOTA within Ulster. I know I wasn’t short of short of chasers on 2m FM when I was there with you recently. Here is a picture of you ascending MM-003 Slieve Binnian when I was with you on the climb last month - I can’t recall sending you any photos and I haven’t had any free time to left to devote to writing up a blog since I got back… For me, MM-001 and MM-002 and the rest unique to me will have to wait until 2017… 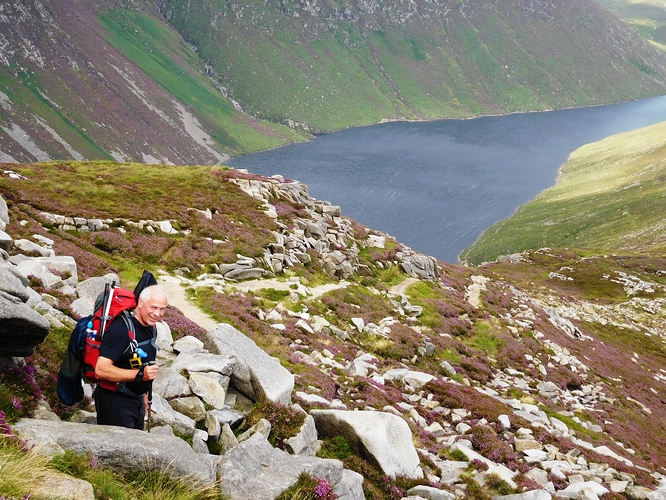 Congratulations to GI0AZB and MI0RTY on becoming shack sloths but please don’t give up on VHF/UHF altogether. We (M6BWA and M0JLA) are beginning to plan another visit to GI, probably in early June 2017, and I only operate on 2m fm and 70cm fm and need as many chasers as possible. We had a marvelous time in the Mournes last year (good weather helped!!) but we still have about 3 to do and then will go West to try the Sperrin mountains any other summits we can pick up.

We found everyone very friendly and helpful (especially in finding how to use their 70cm rigs!) last time and look forward to returning. It looks as if we may find ourselves having to book a SOTA time slot on some hills as the the summits are becoming so popular! I hope the supplies of Guninness will cope with the extra demand…

Victor - your advice and help and cajoling have been invaluable - and you are right - SOTA is totally addictive even to the point where I leave work to listen out for activators on my mobile station! Work is getting seriously in the way of achieving Shack sloth! I love to hear the visitors from mainland GB and even worked a visitor from CT land - Jacques - on a summit to summit at the weekend.
Esther GI0AZA

Victor, thanks for the comments, truth in all the words. Esther and I were re-introduced into the hobby by our two children when they were seeking a skill for the DoE scheme. Jenyth and Joseph have a Foundation and Intermediate to their names and hopefully soon, Joseph will have a full call, we hope. That skill seeking, started Esther and myself to build up our station and one day we met two Victors at a radio rally in Ahoghill I think it may have been. We had never heard of SOTA until then, Esther may have worked a wee man on a mountain in Spain a few years ago, but very soon we were to put together our love of the outdoors, radio operating and going places that is not just for normal folk, to give us more fun, challenges and friendship over the bands than we could have ever imagined.
This has opened up so many areas of our lives that I had assumed was gone and hopefully we can continue for a few years yet. I have to admire the passion and drive that Esther has, the journeys that we take and the smiles on our faces as we complete another SOTA. Our daughter now bids us farewell from her Uni flat, with the phrase, safe trip home ( I assume to ensure the money cow will still produce) but with a sparkle in her eye, she adds, now don’t over do it on the mountains! Victor you are an ambassador for SOTA and a great support for chasers and activators everywhere

Glad to see the G0AZ* series keeping up and enjoying SOTA activity!

So if you Adrian, Ian and Esther all got together for a joint activation what would be the collective to describe the group - would it be a herd for G-AZs - nah doesn’t sound right. A flock of G-AZs - still not quite quite right. Maybe a cluster of G-AZs. Other suggestions???
Jim

It might be a clatter of G-AZs listening to us ascending, but it’s great to hear so many on the hills!

Me and my dad Tom M1EYP will be in GI to activate the 7 remaining Sperrins we have left to which are near to your QTH. This will probably be around May or June. I hope to work both of you on 2m FM while over there, maybe summit to summit. Maybe we could also meet up for a joint SOTA activation, meal or drink while we are over there.

That would be great Jimmy - although having read your Dad’s blogs you would be way to fast for my bionic knee!!

Hmm… given the typical SOTA use of the term AZ, maybe we should be a “zone” of G0AZx’s.