A puncture on the way to a different summit had a knock on effect on SOTA activations. I had to change the tyre, drive to the airport to visit the hire company, swap my car and arrange paperwork before I could return to activating. I swapped to this summit because I knew there was an access road to the military radar site and I would be able to make swift progress unlike my preferred site. Both had been activated before though. Same equipment as Carbon EA8/FU-012. Unlike that activation, the WX went from sunny to cloudy and the wind got up. It was (relatively) cold on the exposed summit, one of the factors that made me quit early. The others were the broken propagation and being scared at how I would get down.

Looking down on the radar and comms site from the very top of the summit. 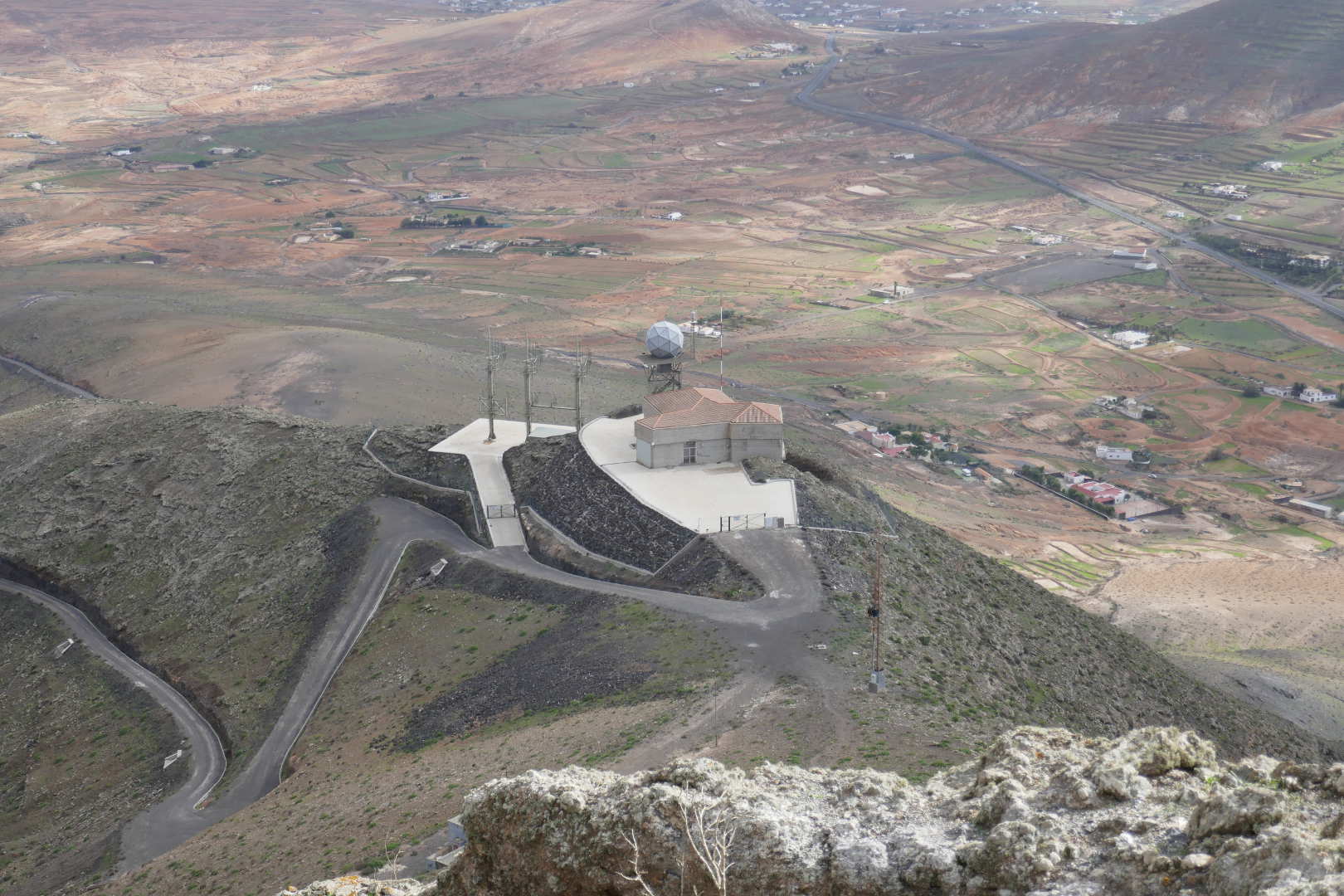 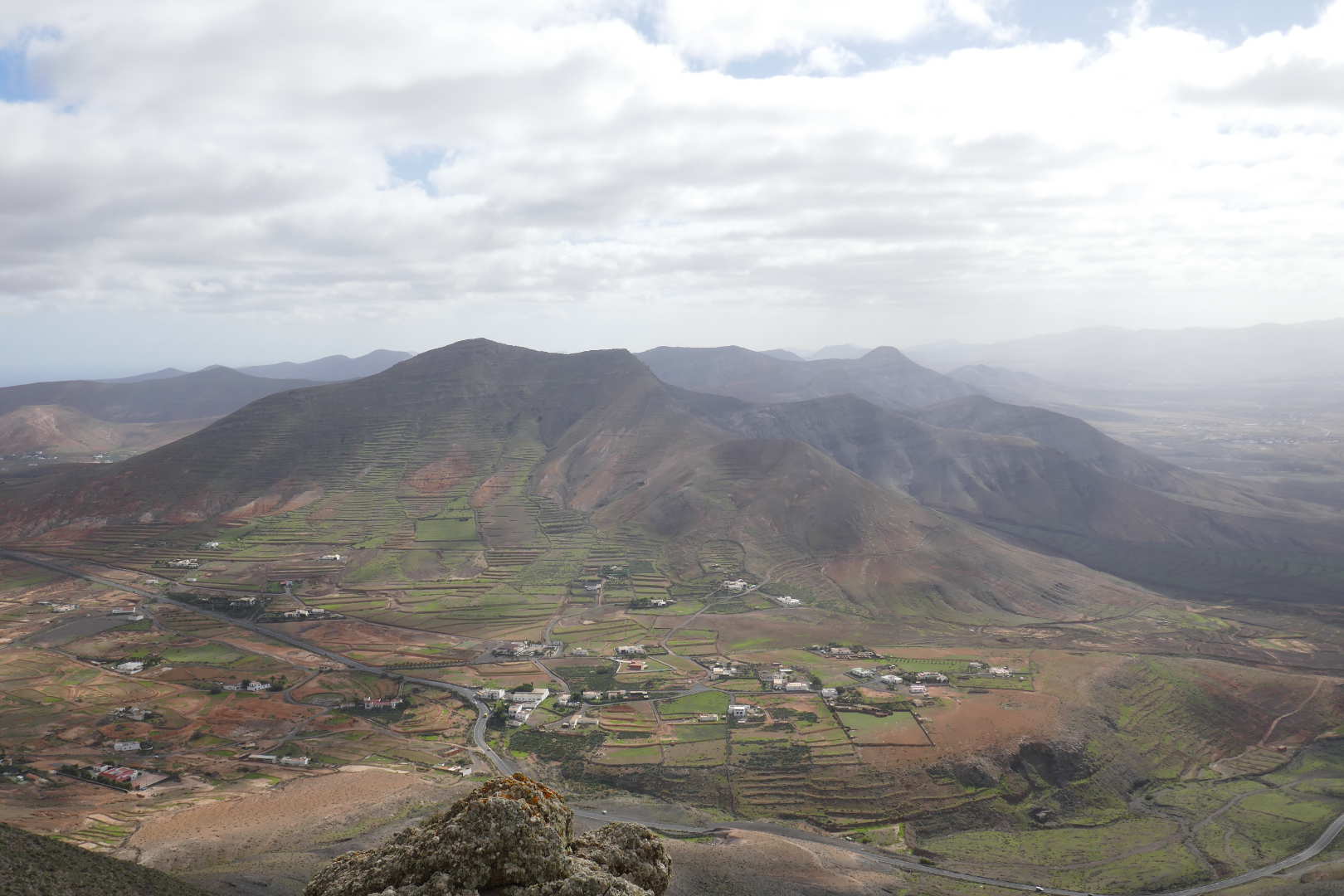 Looking NW. If you continue this way, the next land is Newfoundland, Canada. The WX was significantly better over the Atlantic than over Fueteventura itself. 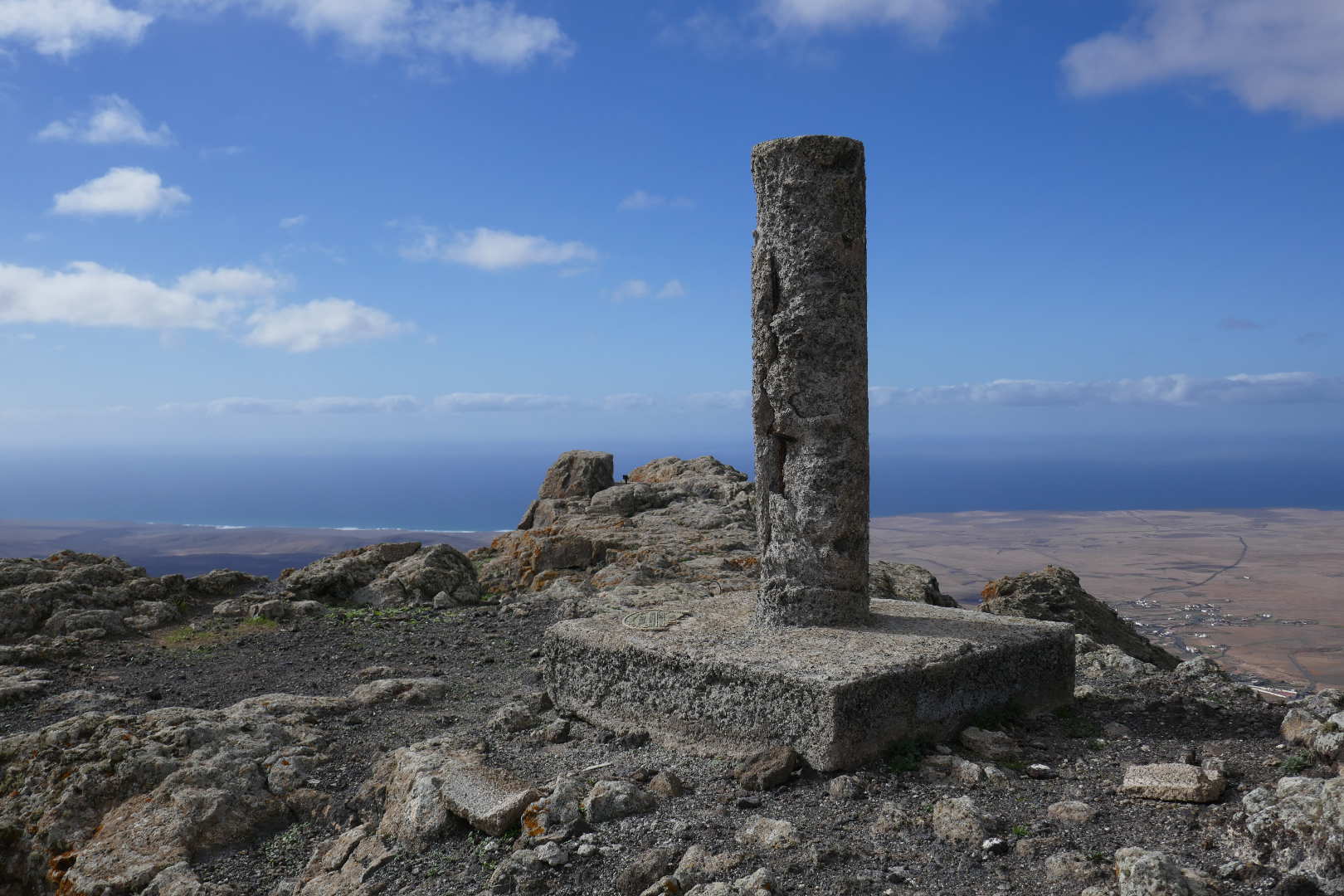 I thought this was another SOTA summit but it isn’t. Shame as there is an access road to the very top. Though most summits with this density of commercial transmitters have very high levels of blocking. 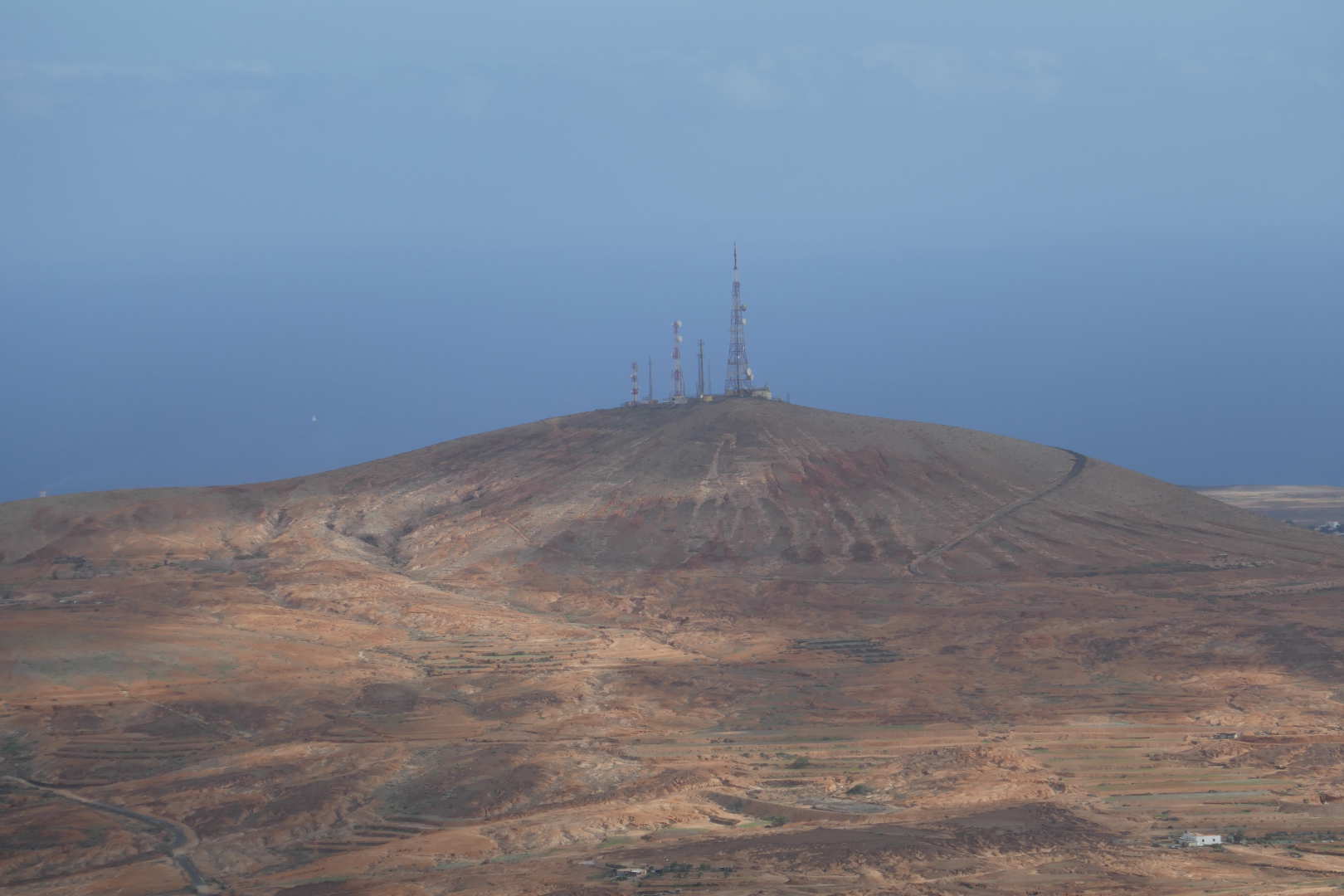 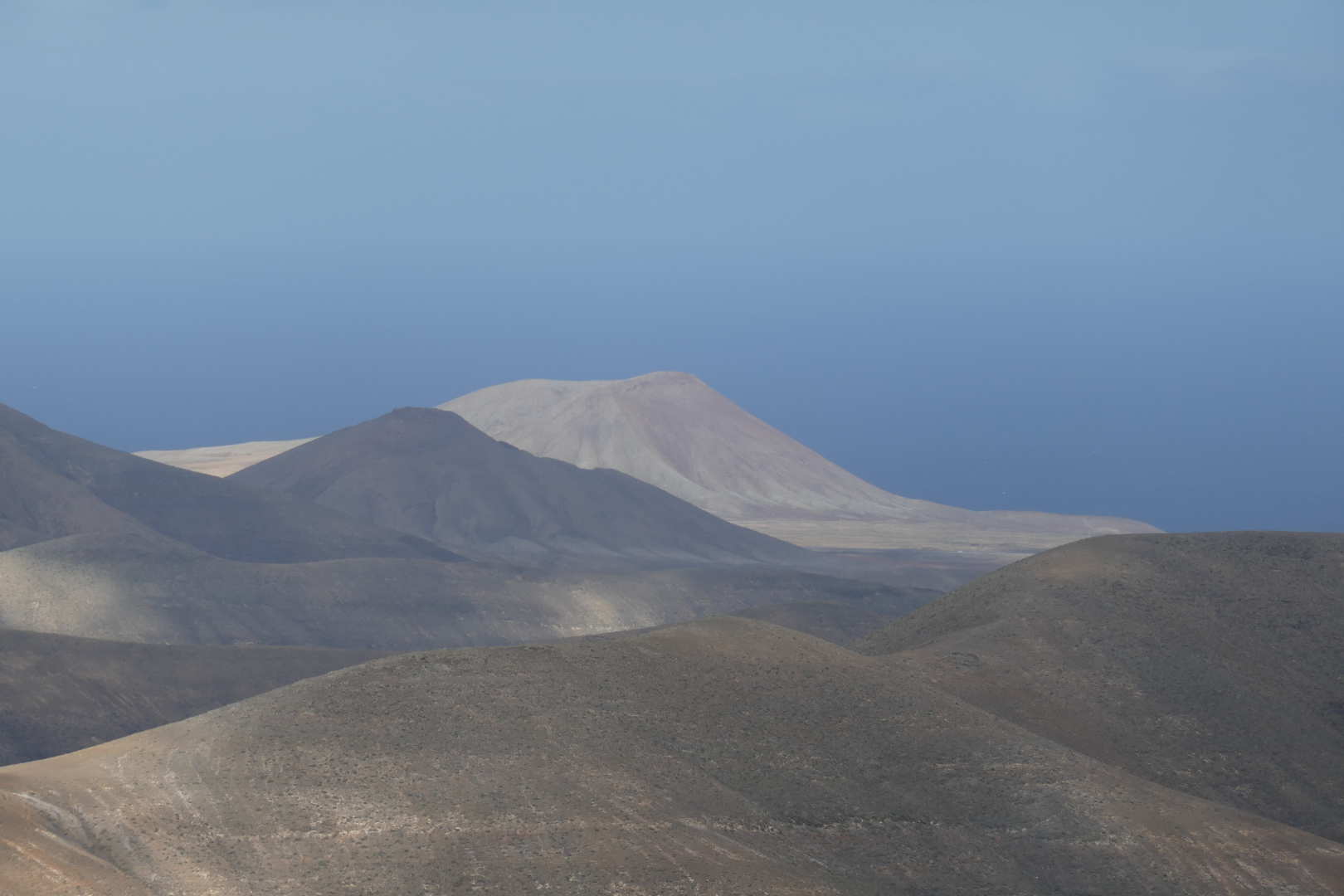 The summit in the middle distance is EA8/FU-042 Calderón Hondo which I also activated back in 2016. Across the water you can see Playa Blanca, Lanzarote. 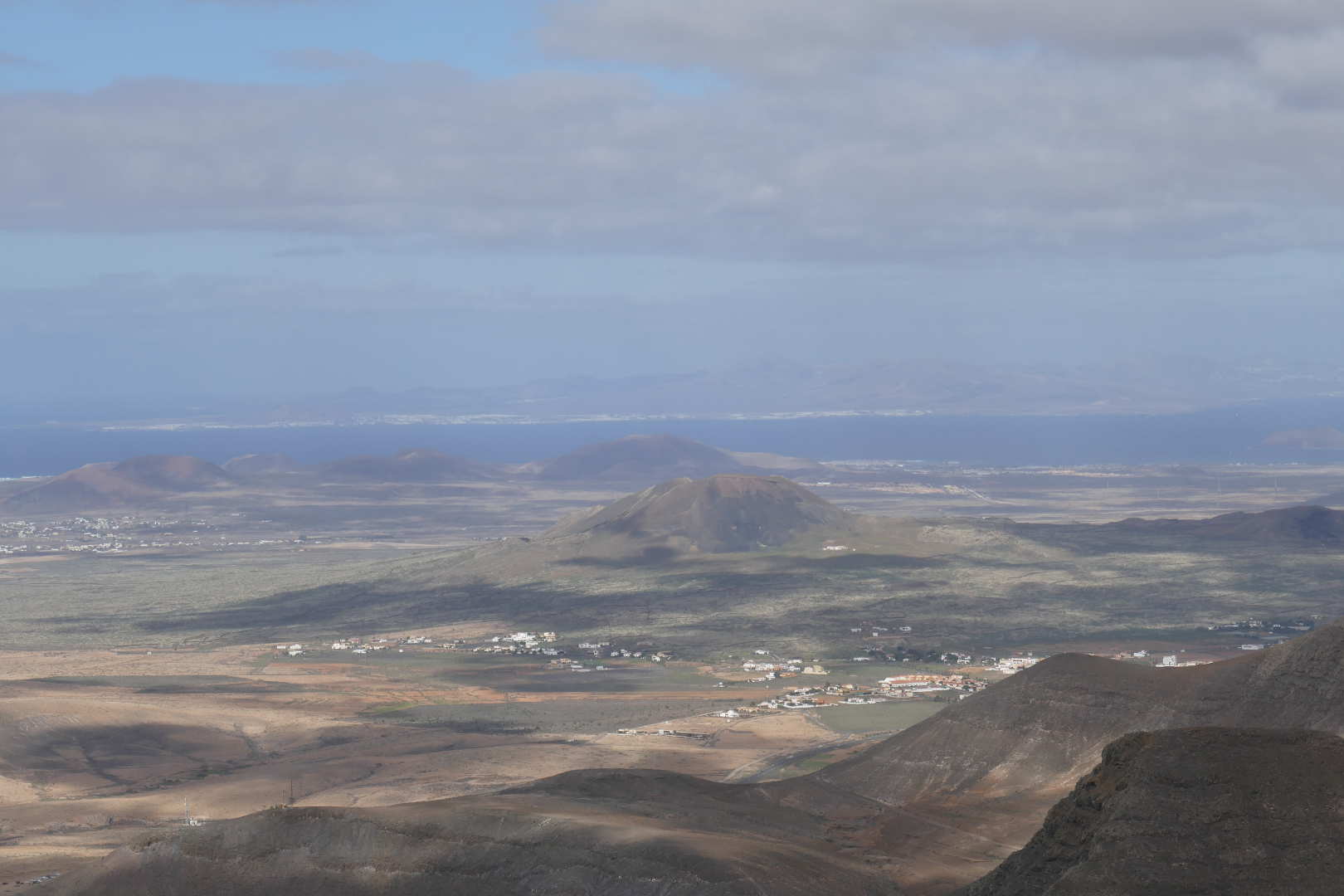 A forced smile, I was extremely uncomfortable with concern about how to get down safely. In hindsight, it wasn’t that difficult when approached with extreme caution. 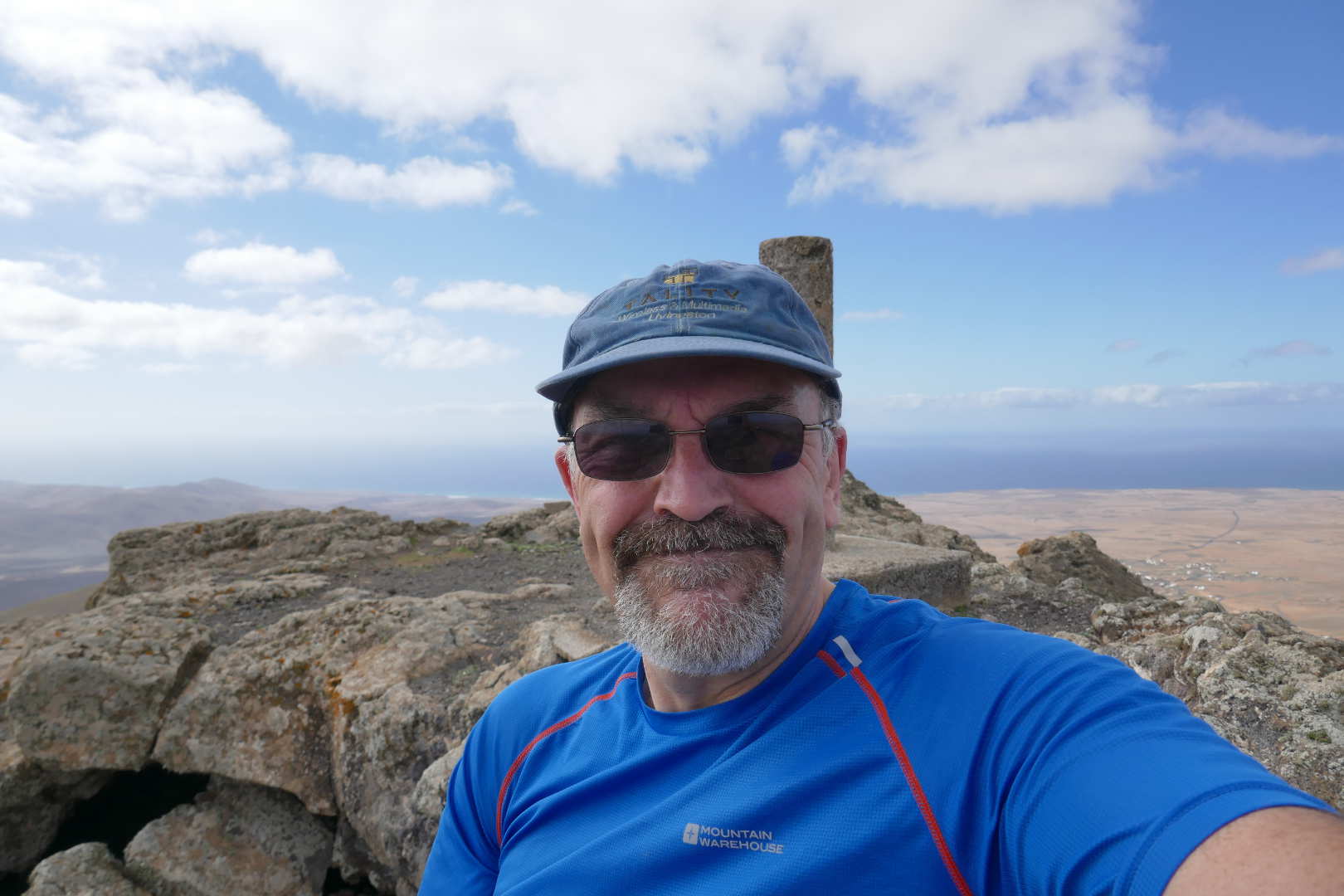 Antenna wedged and held in place with loose rocks. 17/20/30m dipole on 5m mast. A poor match as the angle was all wrong. It worked on 20m enough for 4 contacts with a struggle. 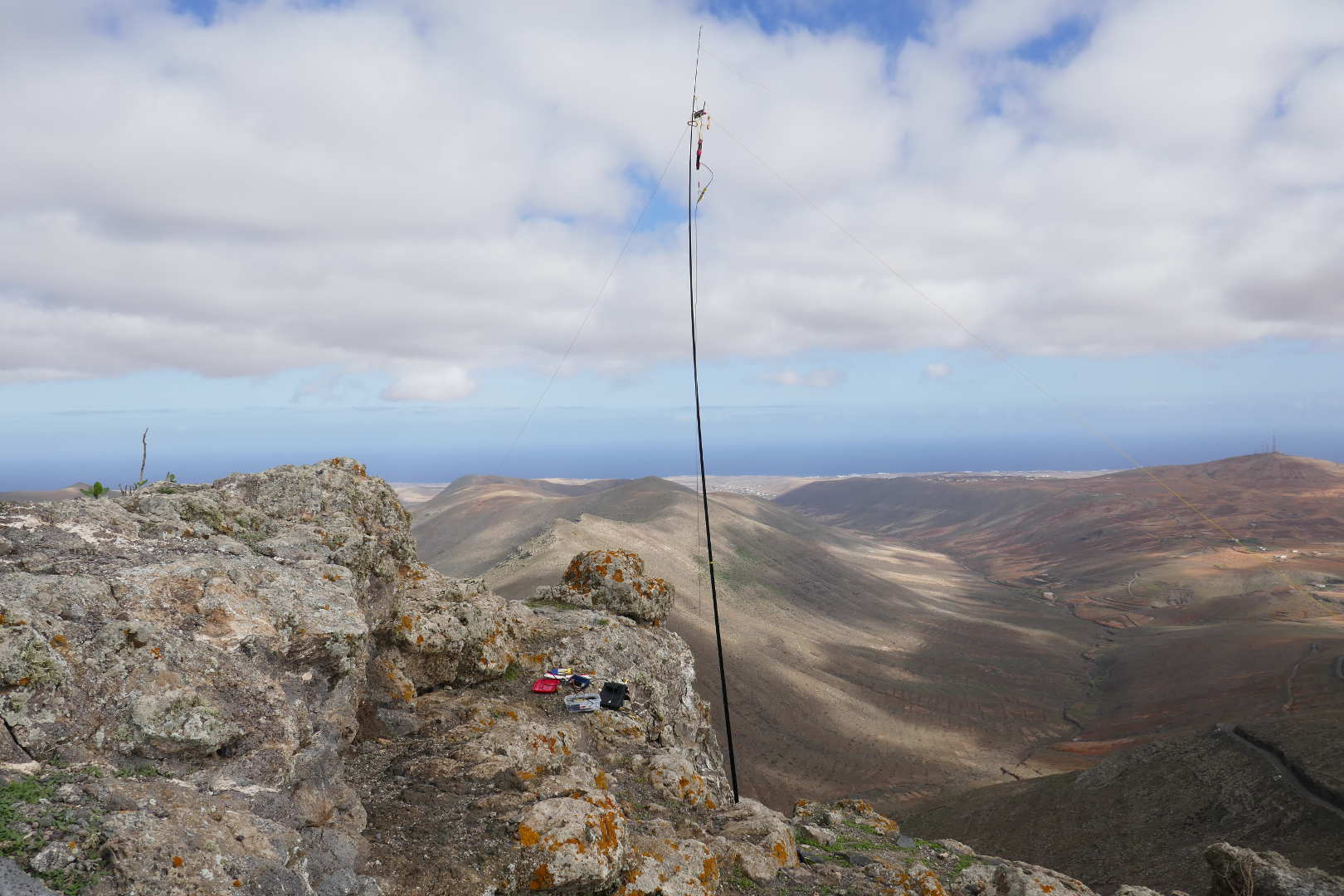 Taken on the way down once I reached better ground. You can see how steep it is and the horrible surface of gravels and small stones the size of marbles on a hard rocky under layer. Not nice. 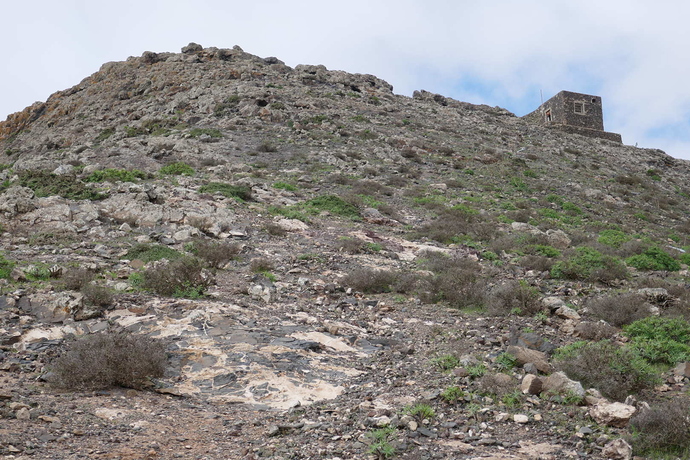 Want! Fantastic set of log periodics for HF and VHF belonging to the Spanish military. 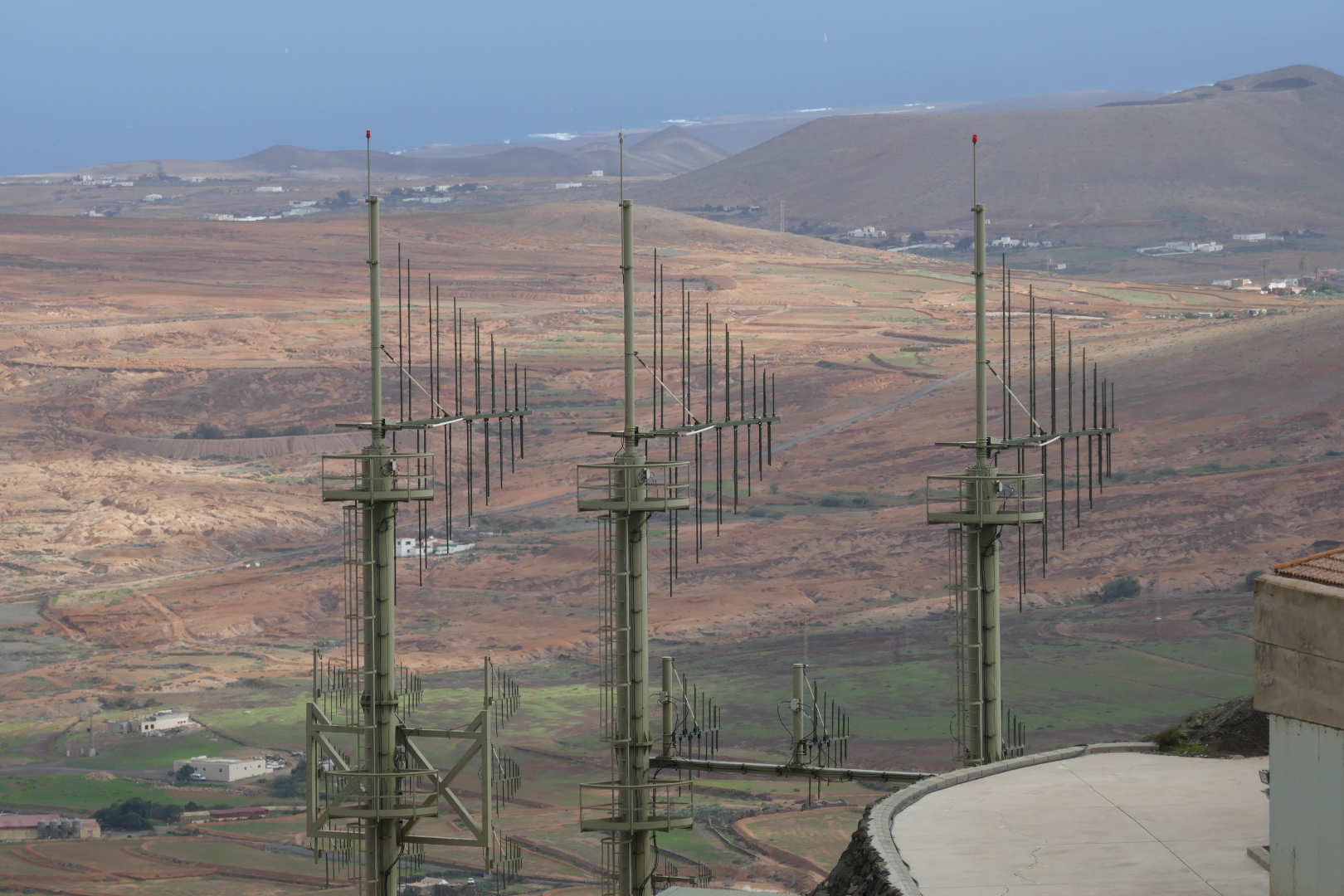 Another view of the stupidly steep final climb. I find it hard to think I even attempted this. 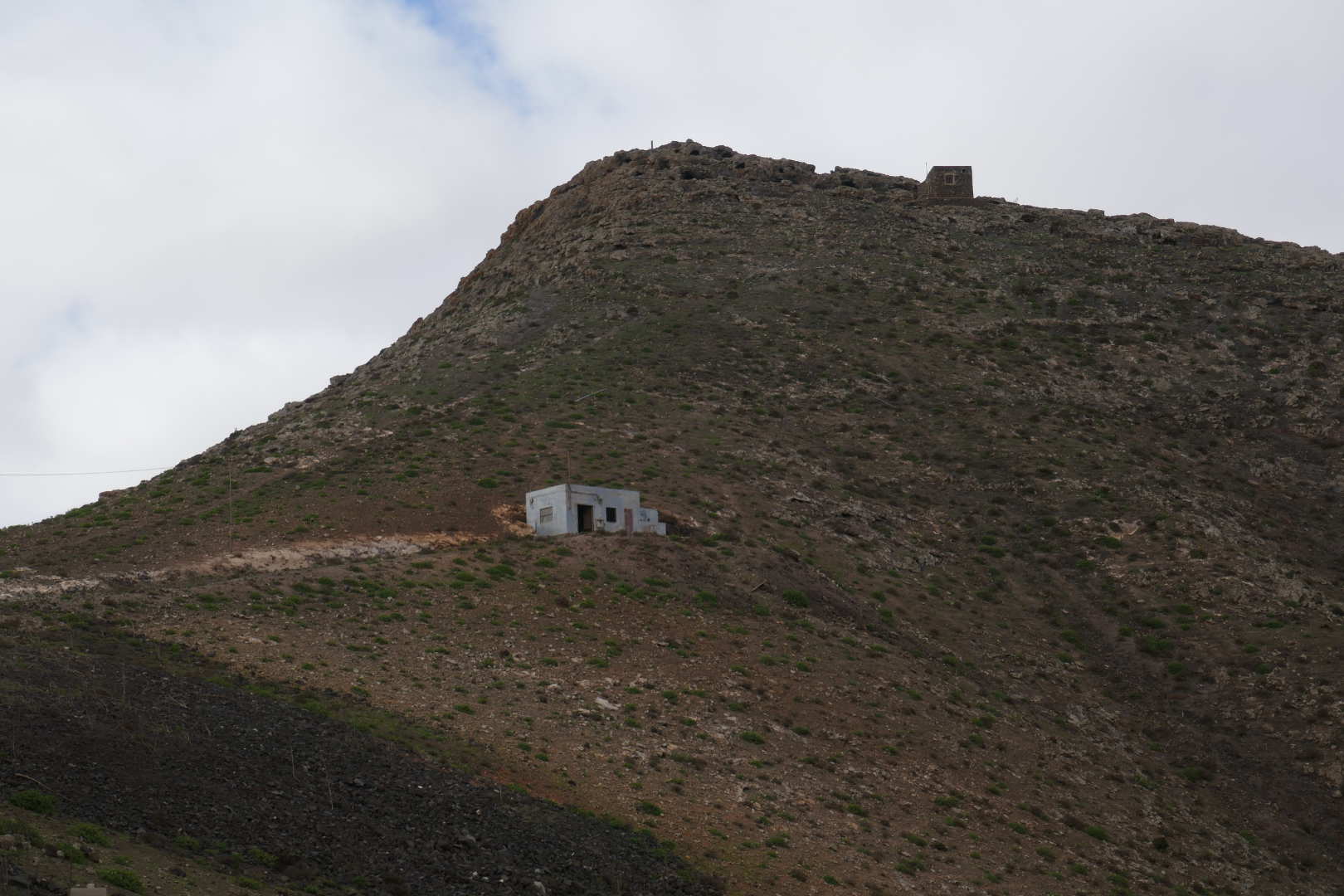 A view of the military antennas from the road. The small cylindrical radome is a TACAN antenna I think. The geodesic radome holds the S-band scanner, you could hear the mechanism and it sounded like it was spinning very fast. I assumed the RF was switched off when the scanner was pointing into the mountain proper. No point deafening the RX and causing lots of local clutter on the displays. 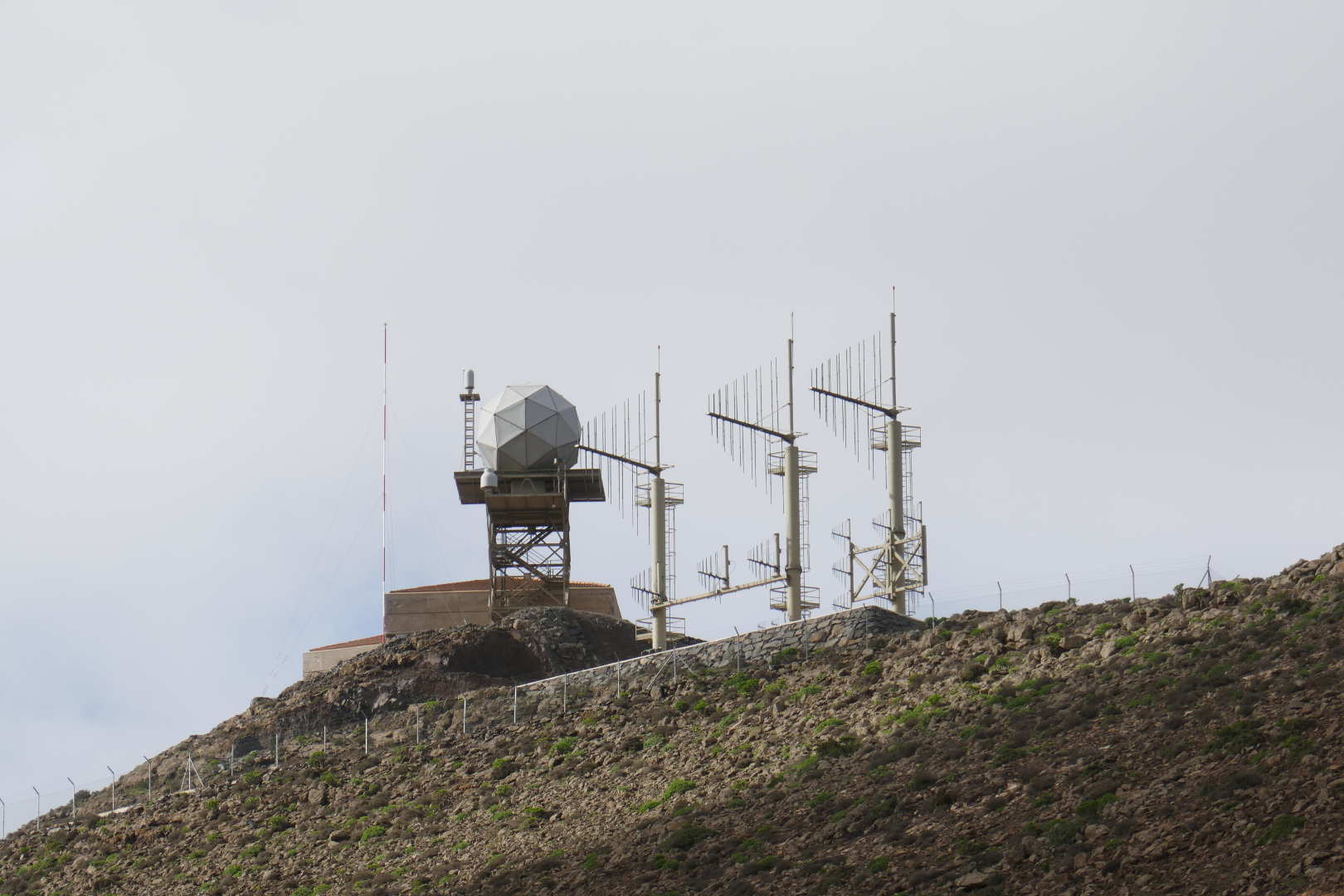 In the end only 4 QSOs and they were a real struggle. Maybe it I hadn’t been delayed and scared witless I would have stayed longer. I was glad to get back to my new hire car, bar of chocolate and a drink.

No wonder why I missed you on this one. Shame…
I hope to catch you on your next one.
Have fun!
73,

Montaña de la Muda is kind of a fun name and after reading your description of how steep the last part of the climb was and how scared you felt when thinking about the way to descend, I’m guessing that I possibly understand why they gave this name to such mountain.
In spanish “la muda” is the underwear, the underpants and they possibly gave this mountain that name because some or many others before you felt a bit the same fears about descending and they finally needed a change of “la muda”.
Note: this is just my theory and it possibly has nothing to do with reality. Another meanning of “la muda” is a speaking disabled, dumb female.
Well, who knows…
73,

A puncture on the way to a different summit had a knock on effect on SOTA activations. I had to change the tyre, drive to the airport to visit the hire company, swap my car

You were lucky you had a car with a spare wheel! So many nowadays only have a puncture repair kit that is only useful for the most minor of punctures and you HAVE to call out the road service guys to rescue you! My car has the place for the jack and wheel nut spanner but nothing is there becuase there’s no spare wheel!
You did well to mange to fit in the activation that you did.

You did well to mange to fit in the activation that you did.

Determination and adrenaline. Determination not to waste a chance to get a summit on the air as Mrs. and Miss FMF were having a day together “without Dad getting in the way”. Adrenaline that was coursing through my veins after getting up the hill.

I was very impressed with the hire company. I take out a yearly car hire excess policy now, it’s about £30/year for something like £10k cover and it means you can ignore the expensive hire company excess charges and not worry you’ll be out of pocket if you have a problem. I’ve had 3 hire cars in Europe this year and the normal excess protection would be about £25/day so about £450 had I opted for it. So £30/year for me and Mrs. FMF is a real bargain. However, the company in the Canaries (CICAR) don’t charge excesses, don’t charge silly prices, provide cars in mechanically good condition and have excellent customer service. They dealt with me so quickly and I am still surprised they apologised for my day being disrupted when I must have driven over something and ruined their tyre. That level of customer service makes me just want to do more business with them!

Sorry we didn’t get a QSO Ed, but the propagation predicting software said working DL would have a low probability of success and I only worked a few DL’s unlike an activation from GM where DL features highly in the chasers.

Sorry we didn’t get a QSO Ed, but the propagation predicting software said working DL would have a low

No worries Andy, I haven’t been in the shack as often as I would have liked, so the chances are I wasn’t here.

On the car excess annual policy - if you travel a lot - well worth it. I have another option, with the Master Card credit card through my Bank (about €80 / year set charge) it includes personal travel insurance against lost/stolen bags, health cover abroad and car insurance excess and you don’t even have to use it to pay for the holiday for it to apply. It’s simply a sweetener to have you go with this class of credit card from them rather than a cheaper one.