I know many SOTAists will have visited Moel Famau at some time and climbed on the remains of the Jubilee Tower. Many people commonly believe the jubilee tower was something to do with Queen Victoria as there are many Victoria monuments scattered about the UK. However, this tower was built to celebrate the golden jubilee of George III in 1810 and was badly damaged by a storm in 1862 and partially demolished soon after.

Brian G4ZRP sent me two scans of some Victorian postcards that shows the tower damaged after the storm but before the demolition took place. I’ve uploaded them to the Flickr group. There aren’t that many images of the proposed tower around on the web but I did find this link http://cy.wikipedia.org/wiki/Delwedd:Twr_y_Jiwbili_Moel_Famau.jpg which shows what it would have looked liked had it been completed.

Unfortunately, the text looks like it’s been encrypted with ROT13

I have read many things that suggest the tower was demolished by revellers who revelled a little too hard in the party to celebrate its completion! Would be interested to know what REALLY happened. Surely we have some SOTA chasers old enough to remember??? 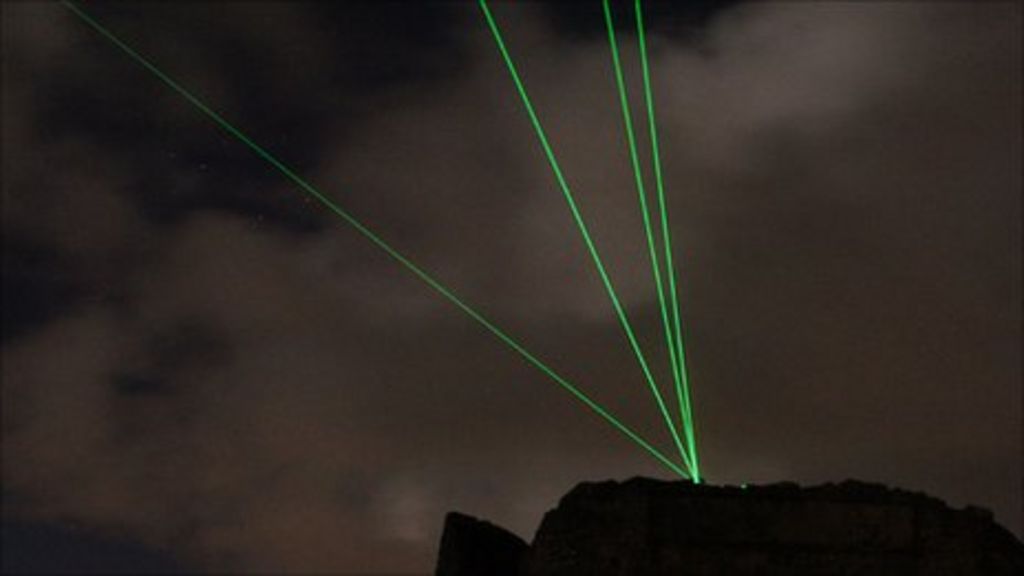 A laser artwork is to bring a 21st Century touch to celebrations marking the bicentenary of the highest man-made feature in north east Wales.

The laser show was at best pathetic, nothing like the BBC photograph shows, it must have been faked. This was due to the the fact that the few clouds there were were black. It needed to really be grey and overcast. The fireworks were however superb. The whole thing was badly planned because at the time the laser show was due to start it was still light. When it did start it was an hour a half late and empty buses to the event were still leaving the Mold park and ride. The candle light processions could still be seen worming their way up as the show started from three directions. It must have been very busy up there.