This activation started off as a spur-of-the-moment thing, we had been to a wedding Ceilidh the night before where the daughter aka the Monkey of Signals (MoS) had danced the night away, it was a bit of a dull overcast day and gone 8.30 UTC before MoS fell out of her pit and showed her face.

I had been planning to do Kinder Scout and possibly Black Hill on the same day, but reading Frasers MM0EFI’s activation report of Kinder Scout made me realise I would be using the same antenna, and possibly get exactly the same kind of reports, so I am going to hold that one over until such a time I have another portable antenna to compare.

In the meantime I was itching to get up a hill, this affliction is something that had bitten me many years ago living in the Lake District, SOTA has rekindled my love of hills, so a trip was definitely going to happen!

I told MoS to put on her walking gear including walking boots but with the promise of Ice cream.

The first destination in the satnav was Snugberys Ice Cream parlour just the other side of Nantwich in Cheshire, by the time we got there it was lunchtime. If you have never been then the ice cream they make is made on the farm from their own cows but the business is now run by the three daughters of the couple who set the business up.

We were soon on our way out, the satnav decided to take me north along the A51 instead of heading along the A534 past the Peckforton Hills to Wrecsam, and eventually, we were on the A55 heading for Mold.

We stopped for a late lunch at the Wylfa Services just outside Mold, so it was after 14.00 UTC by the time we drove into the lower car park, which has barriers and requires £2 on entry.

The thought occurred to me that we were really doing this a bit late in the day and I was doubtful that any other activators would be off the hills now and on their way home.

The last time I had been here was in 1992 when I had walked part of the Offa Dyke long-distance path as part of a day off after my Royal Signals (Territorial Army) unit had finished a two-week exercise and the Training Major thought it was a good idea to get out in the hills, the irony lost that we had spent the previous nearly two weeks on hilltops like the Wrekin and Winter Hill!

Another thought entered my head, this is nothing like how I remember the Bryniau Clwyd hills and that I realised the Offa’s Dyke Path didn’t appear to go through this car park. A sign told us there were two options to go either the steeper route or the scenic route which was easier, both seemed to go through the Clywd forest, we opted for the red trail, it reminded me of the Forestry tracks north of Balquidder in the Trossachs, it turned out to be a steep ascent and I was starting to wish I wasn’t wearing a lightweight fleece. We eventually broke out the treeline to meet the Offa’s Dyke path and the going became easier. The path was now made out of stone chippings.

On arrival at the summit, we climbed onto the Jubilee Tower and I set up the G-pole antenna and Caperlan pole.

On switching the FT-818 on I realised I had a problem straight away, the radio was failing to give me full power and was flashing on three bars! So I was going to be on compromised power, this was the first outing for this battery and I was thinking had I bought a dud?

Having a quick listen around the 2M band and immediately heard Adrian M0AAG/P on G/NP-005, Ingleborough, so I gave him a quick call and secured my first QSO of the activation and only the S2S of the day. MoS made herself useful when a gust of wind threatened to take the fibreglass pole over.

I managed 10 contacts with the furthest west being Caernarfon and Rhyd Ddu, the latter was a surprise as the location that Simon GW4TJC was on the west side of Yr Wyddfa/Snowdon, that is an awful amount of rock between the two locations!

I did have a few calls on 2M SSB but nothing was heard, not helped by forgetting to switch my speech compressor on, also I did try simplex DMR DV and again heard nothing again possibly late in the day.

The walk off the hill was going so well until I realised that we had missed the track down through the Clwyd Forest, so we continued down what was the better track and ended up in the upper car park, what had a been a dull greyed out day finished with sunshine giving a stunning view over the Vale of Clwyd, there followed a short walk along a path that followed the road down to the lower car park, note the lower car park closes at 19.00 UTC during the summer and we had plenty of time to spare.

We attempted to leave the area via the road to Nantwich, however, the road was closed and we ended up going around the houses to the east of Wrecsam.

Final thoughts, I would like to do this one again, last time I was at this location it was a beautiful sunny day, instead of the greyed-out dull afternoon we got. The elevation of the walk is higher than the previous activation at Shining Tor G/SP-004 however Shining Tor is actually taller being 559M ASL compared with Moel Famau being 555M. Maybe next time I will do an HF activation. 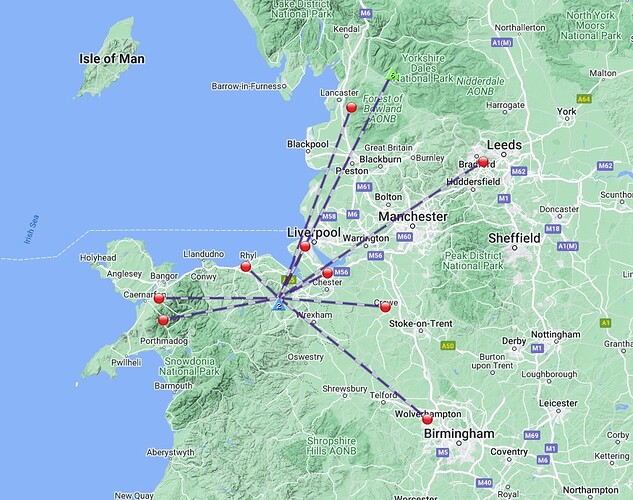 The ascent and descent of Moel Famau

The following day, I did check the battery with a multimeter and all was fine, I think the problem was either a dodgy connection with a crocodile clip or that I had forgotten to take out the NICAD internal battery, either way, it now works perfectly!

On switching the FT-818 on I realised I had a problem straight away, the radio was failing to give me full power and was flashing on three bars

Read the manual again. Flashing means it is high power but operating of internal battery or low external voltage. Most give full power until the voltage drops under 10.2-10.5 volts.

That’s what others thought, I tried the radio on my 22Ah LifePo battery and all was fine so I charged the battery up again and tried it again, this time making sure the crocodile clips were covering as much as the terminals as possible when I switched the radio on and blinked twice and then went to 6W full power which has no indicator. That’s when I discover the NICAD’s battery was still inside.

connection with a crocodile clip

You definitely do. It’s all too easy to make mistakes in the field and not all equipment is as well protected against reverse polarity as you might hope. I have got the tee shirt and so have many others!

I have done it, luckily it only affected the Chinese MX-P50M Power amp, didn’t do that on a summit but at home. Someone is looking at it for me and they have found that it isn’t the best quality and would have failed because there was not enough heatsink compound on the MOSFET as well as other issues.

I’m trying to find the right size power pole connectors for use with a Xiegu G90, it has a mini Tamiya connector that has wire that is only1.5mm squared and that is all that connector will accept so its likely to be very flimsy when used with power poles