Missed out on High Stile, but activated Skiddaw to make up for it!

My partner & I managed to get some time off work for a long weekend up in the Lakes between 9th & 11th March, so I took the Baofeng UV-82 handheld on the off-chance I got to play radio whilst out walking.

Our initial plans were to head for High Stile (G/LD-012) on the Saturday, followed by Skiddaw (G/LD-004) on the Sunday, before returning home to Nottingham that afternoon.

Red Pike/High Stile attempt
MWIS showed the weather was not looking too good for the Saturday, so we kitted up with our Alpine gear and set off early to make the most of the day. Passing the Scale Force waterfall, we found lots of frozen parts, such as this one: 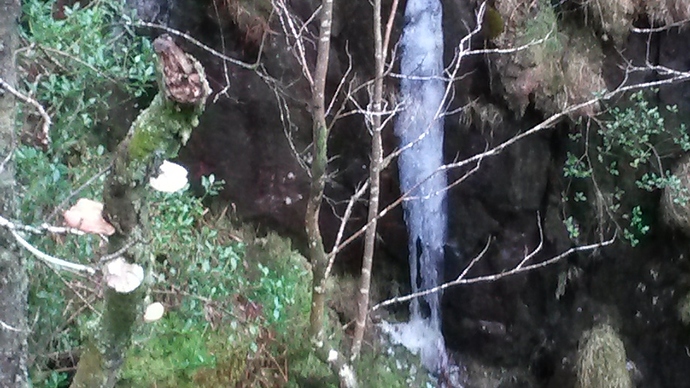 The full waterfall itself is pretty impressive: 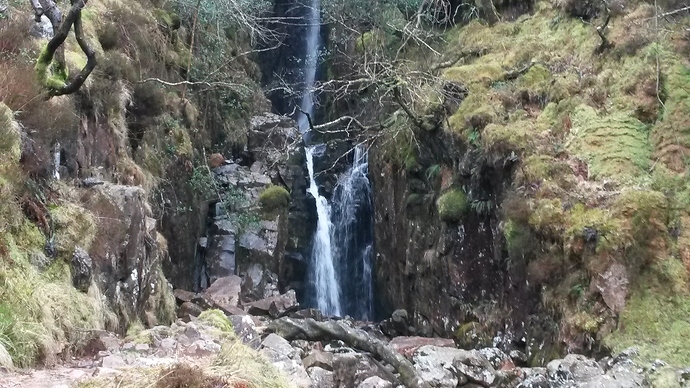 The higher we climbed though, the more the visibility deteriorated and the colder we got. By the time we summited Red Pike at 755m, visibility was only 25m or so and we took the decision to give High Stile a miss. It’s somewhere in the distance , looking up from here: 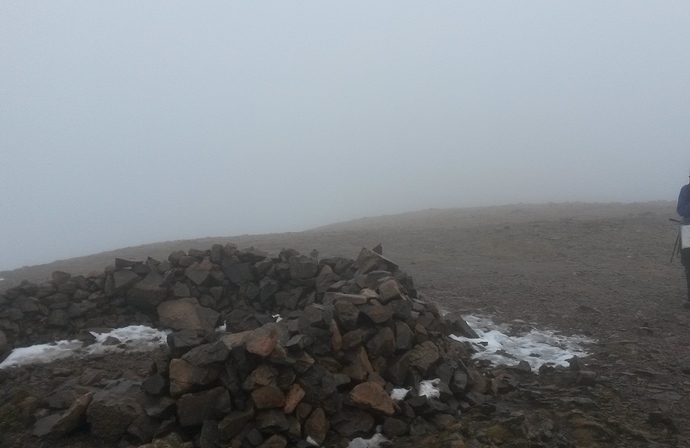 Summit pic, with my glove keeping the Baofeng dry: 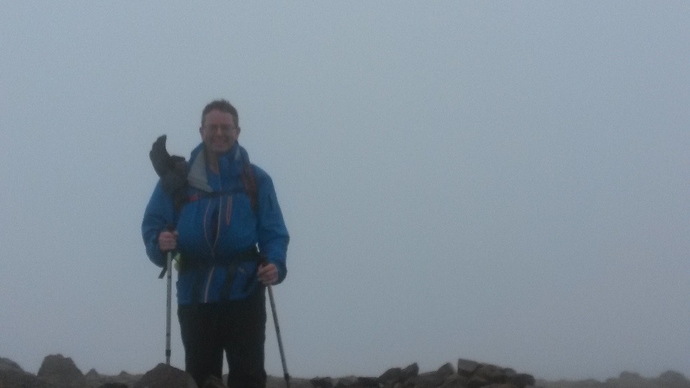 We carried on a little further, but progress was not fun so we returned to Buttermere via the same ascent path. We paused near to the waterfall for a quick lunch and hot drink. I tested some new gas for the portable stove - Coleman’s Xtreme, which is meant to work down to -27degC. It seemed to cope well with the cold daytime temperature and hot tea & coffee was made within 2 minutes. It’s surprising how beneficial a hot drink can be on a miserable day ha ha! 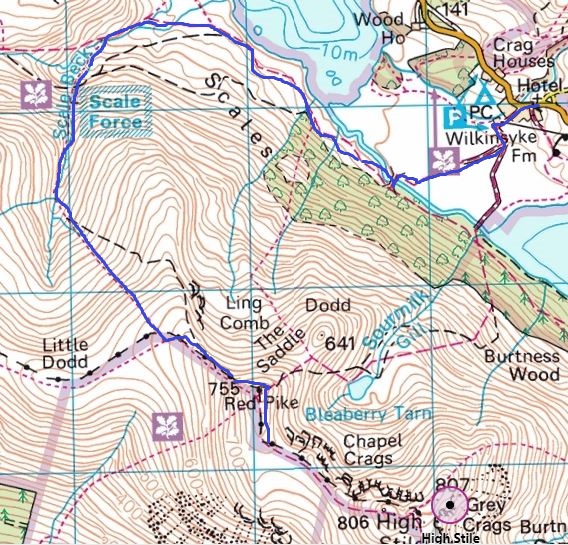 Skiddaw - G/LD-004 activation
MWIS was looking far more positive about Sunday, so we were up at 5:30am for breakfast and to get out of the hotel, before heading over to our planned starting point of Mirehouse/Dodd Wood car park. Upon arrival we were disappointed to see that the Forestry Commission had closed lots of the trails through Dodd Wood while they tidied up some dangerous trees. A quick review of what routes were closed and where we could still go resulted in only minor changes to our planned ascent route. The other bonus was free parking for the day!

Our routes are shown here:
(Dark blue is the ascent, light blue the descent via Longside Edge) 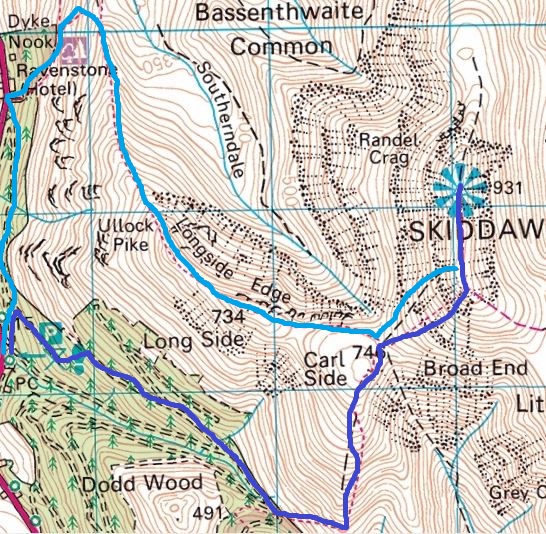 We made much better progress than our attempt at High Stile. Setting off at 7:40am, we were on the summit of Skiddaw by 9:15am and my partner allowed me to play radio for a few minutes before she gave me orders to finish. Just enough time to allow contacts with the following:

My thanks to John (who kindly SOTA-spotted me too), Sue, Geoff and Derek for the calls - much appreciated! 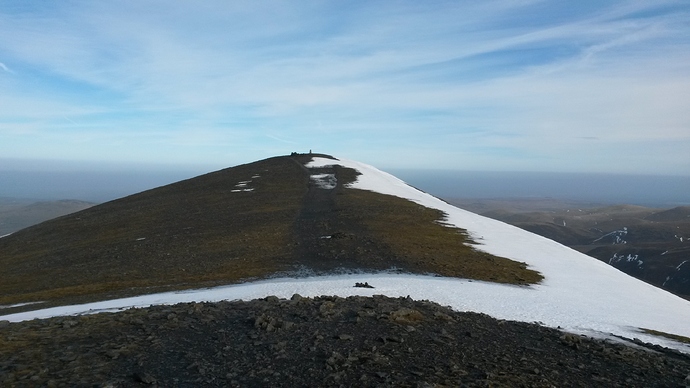 View across to Long Side/Longside Edge: 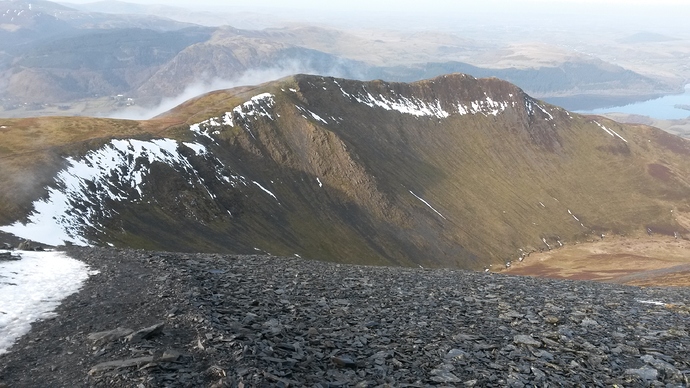 Pretty view - much nicer than Saturday! 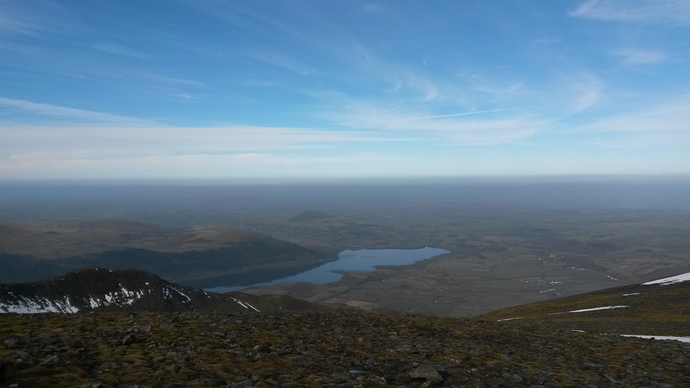 A fairly steady descent had us back at the car for an early lunch at 12 o’clock, before the long motorway drive back home.

This coming weekend I hope to activate Ingleborough and Pen-Y-Ghent, subject to the weather again and my partner’s permission to stop and chat! I’ll have the little Baofeng with me, which seems to work OK on summits without any broadcast masts nearby; hopefully this year I’ll be able to improve my portable setup and activate some summits using HF.