It started as an enquiry from VK1DA to attempt to work one of my activations on PSK31. We are going to try to do that on Thursday morning UTC. Jimmy MI0HGY/P will be doing a joint activation with me, and Nick G4OOE has alerted for the same time. Now Mike 2E0YYY has joined the event too, so I wonder if any VK stations will be activating and creating the possibility of DX S2S?

Of course all stations, regardless of location, are welcome to join in. Thursday 23rd November @ 0730z.

Yes, and I am due on Coree, Webbs Ridge etc over the W/E.
Compton

I trust you will operate on 23cm, much lower profile in a thunderstorm.

And then there were two! Seems only mine and Jimmy’s alerts remain now for 0730z tomorrow. 2E0YYY has marked his as “cancelled”, while G4OOE’s has disappeared altogether.

I’m sure we won’t be the only activators QRV on 20m, but we’ll have to wait and see.

The main aim remains a PSK31 sked to VK. Who knows what will happen? It’s all rather exciting this radio business!

Tom
I can only activate with SSB/cw at present. No psk from summits yet.
I’ve not heard any eu signals on 20m this afternoon from Black Mtn.

Good intentions and all that…

Thursday 23rd November 2017 was a 5am get-up for Jimmy and I. VFM was super at the services on the M2 between Belfast and Antrim - 9-piece Ulster Fry + toast + tea/coffee for £5. English service stations take note. In-car audio came courtesy of the first Ashes test match in Brisbane. Not via BBC Radio 4 Long Wave 198kHz as it has done for many years, but with significantly superior audio from BBC Radio 5 Live Sports Extra.

Jimmy successfully navigated us to the gate at the start of the route for Carnearny GI/AH-009 (formerly Tobernaveen Hill). It was still dark at 7am so we began the walk with headtorches. We were looking for the right turn up a boggy forest path, but veered off too early, so it was slightly more tricky terrain, though not too bad.

When we did get back on the track, most of it was so boggy that it was a no-go. Fortunately, there was large enough gaps between the trees and branches to the side, that we were able to progress fairly easily on that firmer ground.

In about 15 minutes we made it to the clearing at the summit, and the trig pillar. Setting up was tricky with little room for guys and radials. A little improvisation was required with the 20m GP with one radial wrapped around a Leki pole allowing it to double back on itself. It took Jimmy several attempts to erect the MFD on the SOTA pole.

I was easily qualified on 20m CW before Jimmy was even QRV. Unfortunately, I had forgotten my mobile phone and left it in the car. Considering I was supposed to be attempting a PSK sked to VK, I felt a right chump! However, there didn’t seem to be any condx to VK, and VK1DA reported the same when he advised that he wasn’t able to get on PSK. I now didn’t feel quite so bad!

Jimmy worked Robert MI0GDO on 2m FM, as he usually does from every GI summit. But he couldn’t raise any other interest on VHF, so he had a go on 20m SSB, which gave him the QSOs required.

The summit clearing is surrounded by tall trees, so we had shelter from the icy wind with significant windchill. But when it started to rain, we decided to pack up and get back to Belfast.

So no S2S, no DX, no VK, no PSK - but still a successful activation, and a new summit name added to the log, even if not a new summit reference.

A couple of photos from todays activation. 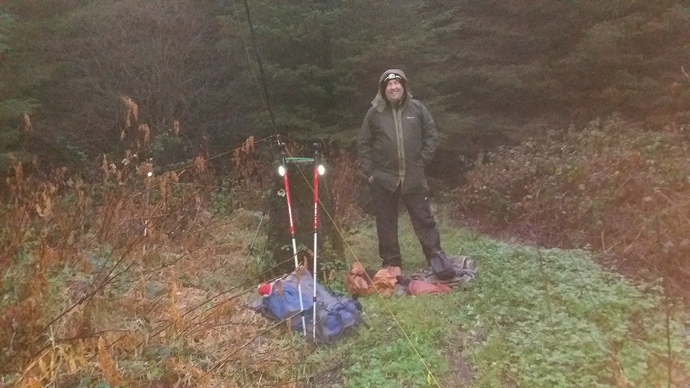 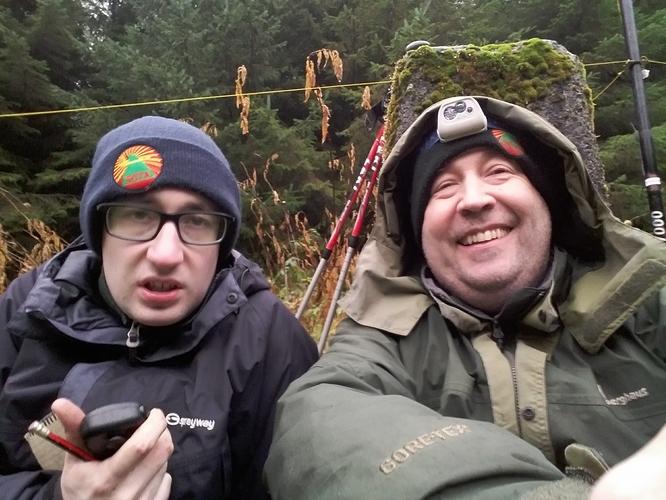 I was hearing nothing further afield than japan tonight on Black Mt vk1/ac-042. After 0730 became 0740 without any sign of you, I did spend about 20mins trying to contact a JA who was activating a JAFF WWFF park, and as Black Mt is a nature reserve I had a park code for him too, but the locals in JA were far stronger than me and I didn’t make it.

We’ll try another time. I’ll look out for your alerts and try for a PSK contact from home.