This morning with a qso with N1FJ, Frandy, KB1RJD and RJC became super sloths. It all started in March of 2010 with a 2m contact with W1DMH and got going in earnest in Jan 2011. Our greatest # of activator chases continues to be Doug! Thanks for all 276! SOTA has sure put a lot of enjoyment into our radio experience. Thanks to the entire SOTA community.
Merle and Herm

Congratulations Herm & Merle. It has always been a pleasure working both of you, whether as activators or chasers and the biggest treat was to meet you in person here in Raleigh.

Congrats from Pennsylvania to Herm and Merle on reaching Super Sloth. Also thanks for points when you two were out on your activations. Really like your QRZ picture. Looks like you two are having FUN. 73 de Scotty

Well done Merle amd Herm and many thanks for all the QSO’s along the way.

Congratulations, Herm and Merle! It’s been a pleasure working you as both Chasers and Activators.

Well done. Always a pleasure to have the Weber family in the log. Hope to deliver some more points in near future. 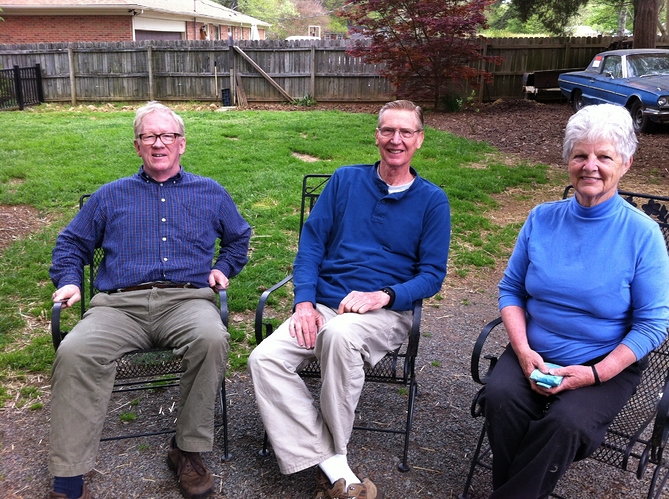 Congratulations Merle and Herm on a job well done. It’s always nice having you both in the log either as Chasers or Activators.

All the Very Best,

Congratulations Merle and Herm. Always a pleasure to hear you. Either chasing or activating.
73 Chuck
AE4FZ

Rich, Scotty, Hal, Mike, Walt, Jorg, Pete, Dennis and Chuck,
Thank you for your posts! Always nice for us to hear your voices too!
Thanks again and 73. Talk to you soon, we hope.
Merle and Herm
KB1RJD and KB1RJC

Congratulations to both of you. I always appreciate hearing your cheerful voices and I hope for many more KB1RJ* in the log.
Malcolm VE2DDZ

Congrats to both of you, I’m envious of your prolonged effort in the achievement. I’ve been off the air through the Summer, however I enjoyed our QSOs last Spring and Winter both as activator and chaser. One noteable thing for me is that I could contact you on 40m since most of my activations were in NY. NH is local!

Thanks for the all the qso’s on my summits and thanks for being on your summits. I always love to hear from both of you. Can’t wait to hear you again soon !!!

Hi Malcolm, Kevin and Erik. Thanks for the nice comments. Will be out activating some “completes” in next few days.
73’s Merle and Herm
KB1RJD & KB1RJC

I have to add to the CONGRATULATIONS here. I am not going to check the database right now, but I believe my first contact with Herm and Merle was the end of March 2010. Merle answered my CQ on 2m from Green Hill. I believe this was my 6th summit ever. Back then I was a new ham, I only did 2m only and it was all cold calling, no alerts, no spots, because there was no one within 2m range that monitored SOTAwatch. After a chat she brought Herm to the radio. Unfortunately I did not get their email address, as I was developing an email list (kind of a private alert system) to let the locals know I would be out and about. Fast forward nearly a year to January 2011, I again worked Herm and Merle from Mt Israel, I stayed in touch with Herm as I descended in the cold winter dark, with a failing headlamp. It was comfort to hear a voice in the night.

Soon thereafter I gave a SOTA talk at their radio club, during which I was supposed to present them with their 100 point chaser certificate, unfortunately I left it at their house. I believe it was one of the first 100 point Chaser certificates in North America. From then on it was “game on” Herm and Merle have chased me over hill and dale ever since. Herm told me the other day that he had chased me on 260 summits. They soon got into activating. Now completes are are a big part of their game. When I leave the house in the morning I rarely alert, I call Herm and he puts the alert up, as it makes it easier for him to change it as summits and times change. No effort is spared to work Herm and Merle from a summit, every band will be tried the antenna (dipole) rotated 90 degrees, trees climbed… They were there for to put me over the top for “Goat”, I was on a summit for their “Sloth” points. Unfortunately I missed their “Super Sloth” points. Herm and Merle have been there for me, offering navigation tips, notifying me of S2S opportunities. Giving heads up on deteriorating weather. It has been my pleasure to meet and operate with these fine Hams, and to call them friend. Thank you for the great times and QSOs over these last 5 years. I look forward to your becoming “Goats”. Your almost half way there. Here is to many more QSOs and lots of completes.
73 REALLY 73
Doug
W1DMH

Big CONGRATULATIONS!! to Merle and Herm! It’s always good to hear you when I’m on a summit (and also to work you both when you’re on a summit! Looking forward to many more QSO’s to come!

I’m happy to have gotten you both over the 10,000 chaser point mark! It proves that I DO have a microphone…
Frandy N1FJ

Hello Jean-Francois. We also appreciate your comments and all the qso’s from the north.
And Dave in the south - we delight in hearing your voice too because many times we have been on those summits (like Cheaha and Monte Sano) and it stirs a memory.
Frandy, it was nice, since Doug could not do it, that the moment was shared with you…who not only has a mike, but has so unselfishly plugged it in to make many special contacts with us! We look forward to meeting you…
Then there’s Doug who started this fine adventure! We really really appreciate your kind words and treasure this symbiotic relationship that has endured for 5 years. We echo your wish that there be many more in the future. Completes yes - all we have to do is follow your trail! Mountain Goats - maybe in another 5 if we last. It will be fun trying. Thank You, friend!
73’s Merle and Herm