The WX forecast was mixed for this weekend, parts of GM would be sunny and parts very wet. It appeared the better summits would be wetter. Rather than drive a long way to get wet I thought I’d revisit some of the local summits I activated when I was starting out. I was last up Meikle Bin (pronounced meek-ul bin) in December 2008 so a trip in the Summer would show the hill in a different light. Also when I was last here it was very cold and frozen and incredibly foggy.

Parking for this summit is best at Todholes Farm car park at NS672858 where there is space for 10 cars. This is a popular hill and the car park was half full when I arrived and packed to overflowing when I returned to the car. The WX started off very sunny but as predicted clouded up. At times there well short spells of drizzle but not lasted more than a minute. The clouds managed to stay above the 570m summit all day. There were periods of blue sky and sun and the wind wasn’t strong nor too cold.

When I did this last you needed a map to pick the right tracks but now every junction has a fingerboard sign so it’s simply a case of following the signs to Meikle Bin. There’s 4.25 km on forest tracks and they are very good. You’d have no trouble driving a Ferrari up them, no potholes, no rocks, no raised centre. After that there is a path that branches off out of the trees to the summit proper. This was muddy I remember last time but now has been worked and gravel covered to save it from boot damage. You don’t have to think to find the hidden path, there’s a sign. From here it’s 850m walk and a 150m climb to the trig point. Anquet says 1hr 40 to the summit, it took me 1hr 20.

As this is a very busy hill and the summit is quite small I set up at the extreme of the WAB trig point distance to put as much between me and the top. Also there is plane wreckage that people visit so I wanted to be clear of that. I’d had a call from my good friend Geoff G6MZX who was going to activate SC-008 and was arranging a sked for a S2S so I decided to use 60/40/30 and a link dipole rather than see if the ionosphere was going to play on 20/17/15m. In the end I didn’t manage a QSO with Geoff.

I started on 40m CW but had the handy on. That let me grab an S2s with Iain MM3WJZ/p on GM/SS-028 Merrick. I also managed 2m QSOs with Jack GM4COX and Jim MM0GLM/p on GM/SS-022 Creag Uchdag. Apart from that I worked 40m CW which was not terribly good. With a good 4g signal on the summit, I self spotted and tried 40m SSB. 40m didn’t know whether it want to be local or DX, so 40m ODX was EA2CKX. Back to 40m CW let me work a few more then 30m CW gave me EA2DT or SM4DHF for ODX on that band. A final visit to 60m gave me 1 QSO with G7BGA. I did see Angel MM0HDF spotted on 40m CW on Rubers Law SS-210. I could hear Angel at 339 but there were too many stations calling so I missed that for a complete, damn!

After 1hr45 on air I packed up and wandered out to photograph the plane wreckage. This is the remains of a Fairy Firefly which crashed on 8 January 1950 sadly killing both pilot and gunner on impact when it clipped the top of Meikle Bin. A large section of the port wing remains almost at the summit. The undercarriage is still attached and the mounts for the 20mm canons are obvious. Further down the hill by the trees is the remains of the Rolls Royce Griffon engine. I’d seen the wing on my previous visit but didn’t search for the engine in the fog. In fact it’s trivial to find as there is an obvious path from the wing to the engine just at the edge of the plantation.

Fly Agaric mushrooms, past their best however. 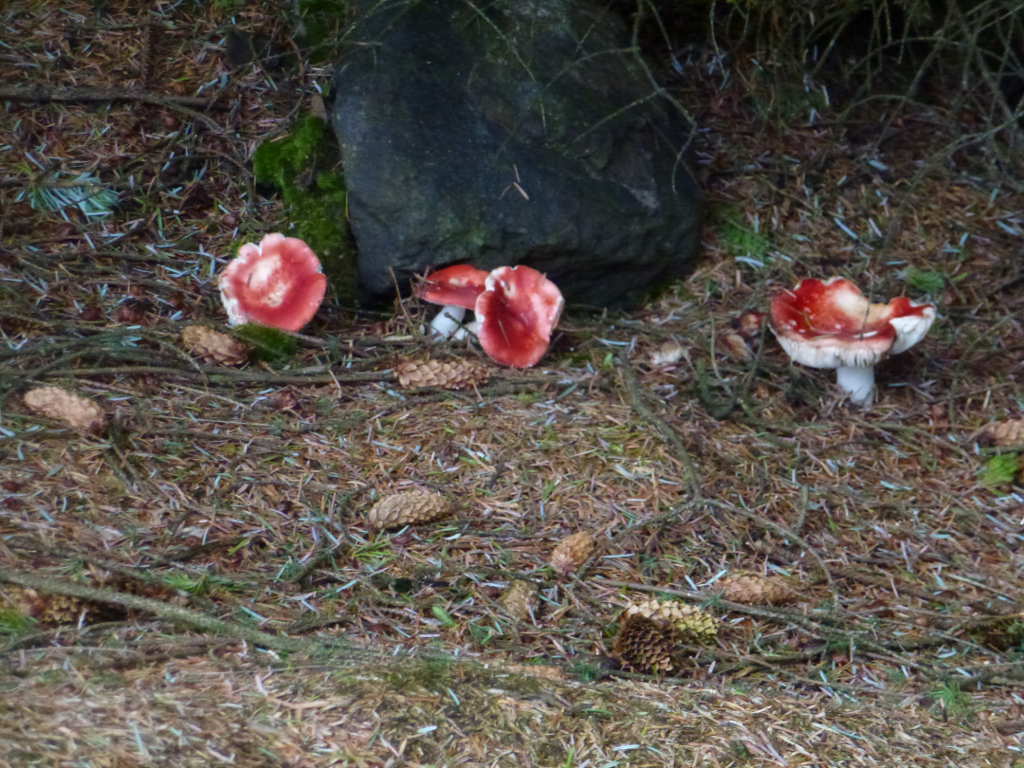 Chantarelle Mushrooms (maybe, I’m not going to eat them even if they are!) 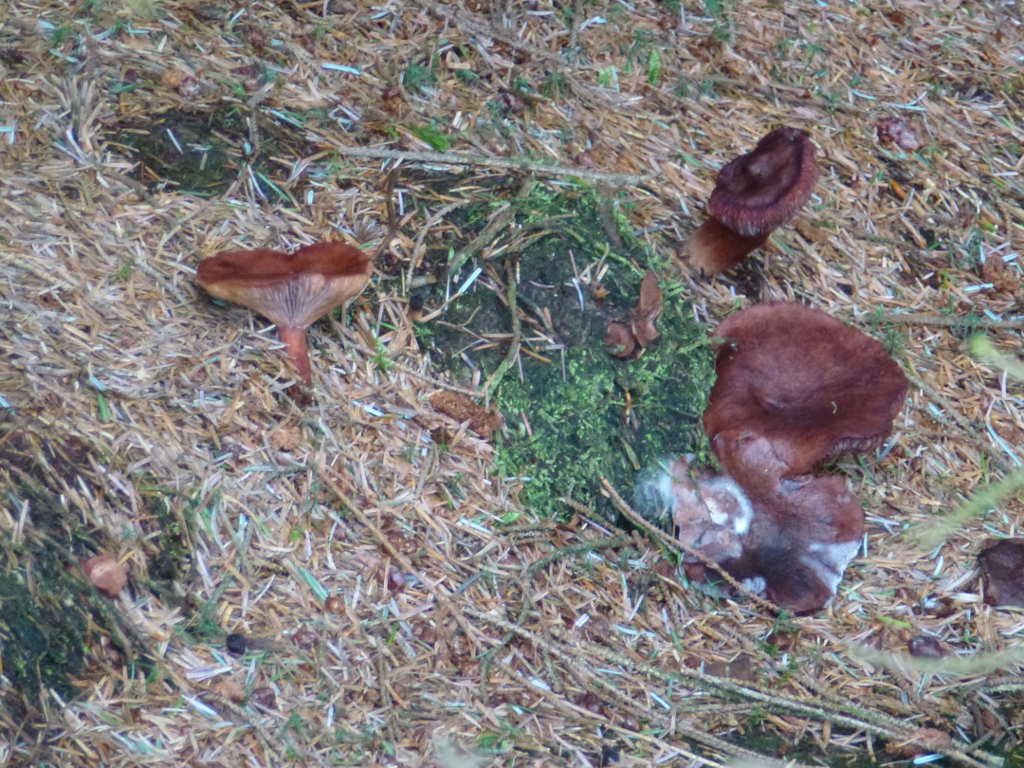 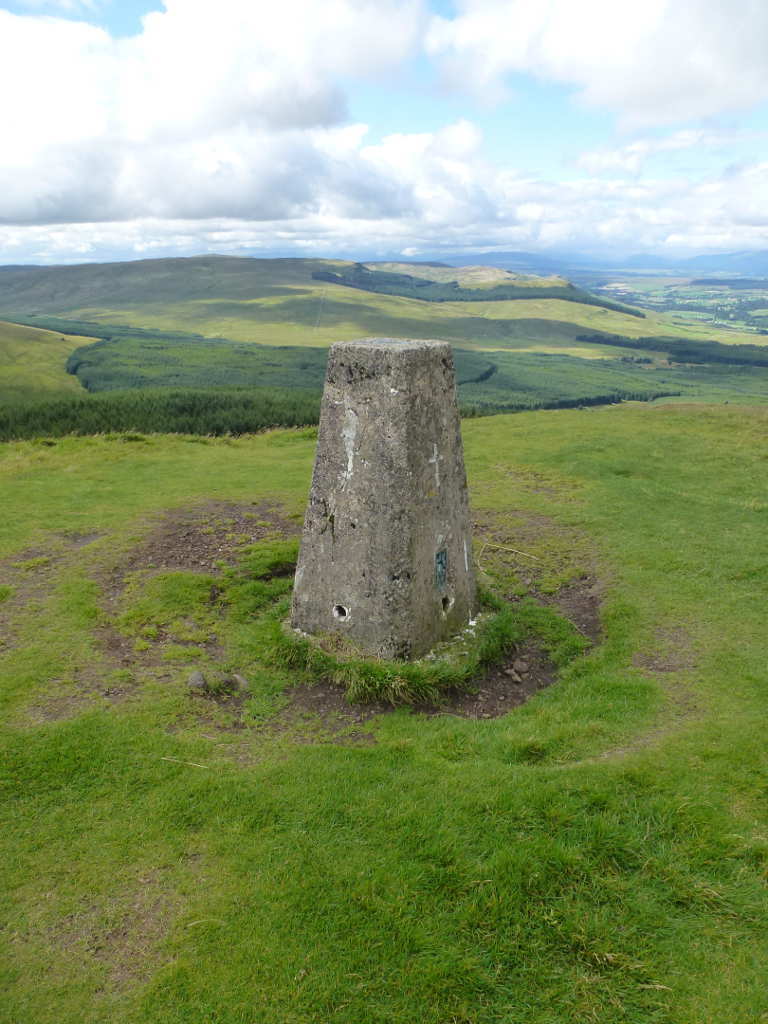 The Flanders Moss, the large flat area at the head of the River Forth Valley. Behind Flanders Moss the Highlands start. This is looking towards Aberfoyle. The prominent hill on the right is Ben Ledi GM/SS-023 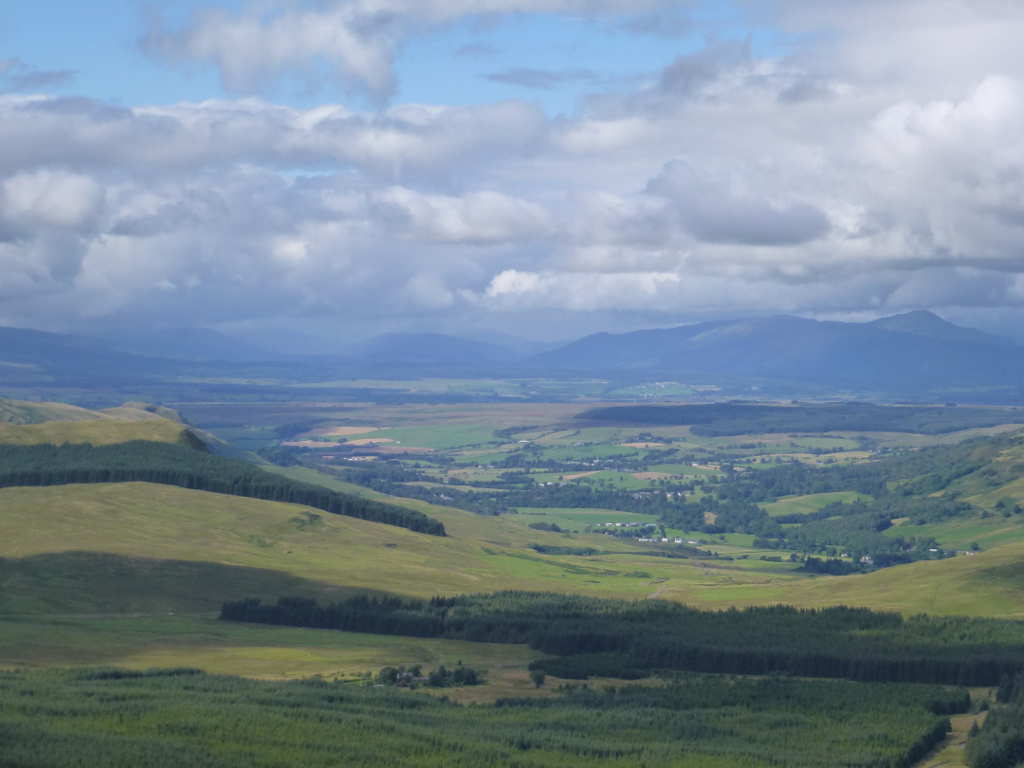 Looking East to Grangemouth and the Grangemouth refinery with the 2.5 Forth bridges behind. You can see the famous red cantilever Forth Rail Bridge (features in the 1950’s Kenneth Moore version of The 39 Steps). The 51 year old Forth Road Bridge has merged into the rail bridge. The big towers are the 162m tall supports for the new £1.2billion 2nd Forth Road Bridge due open in 15months. 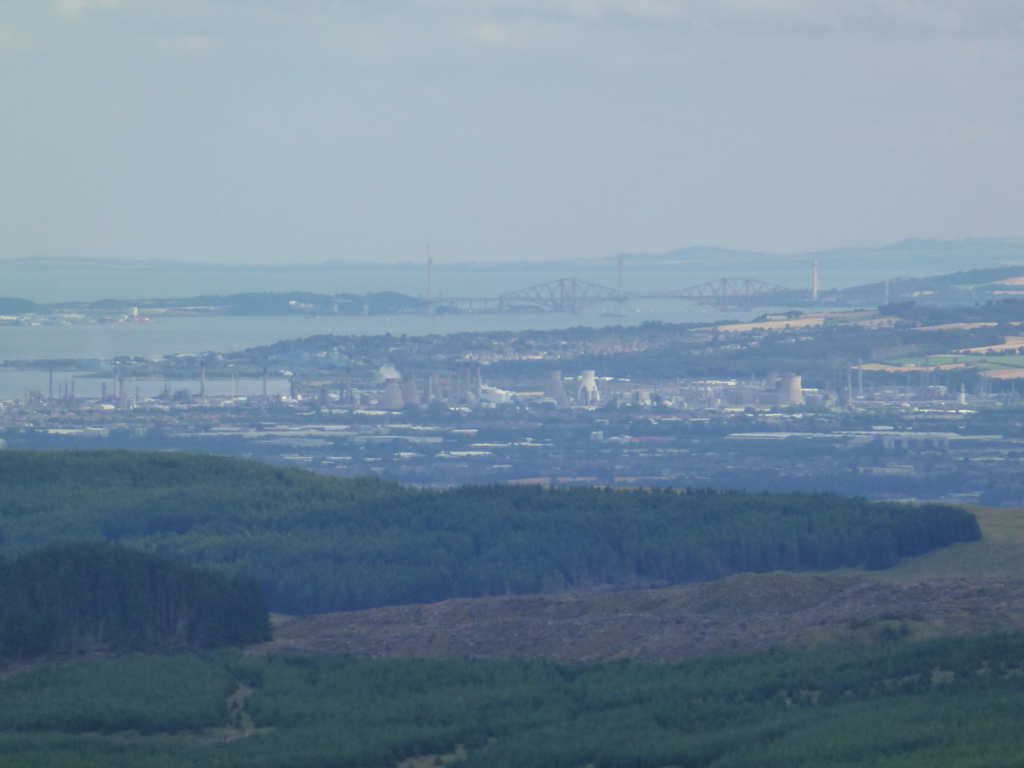 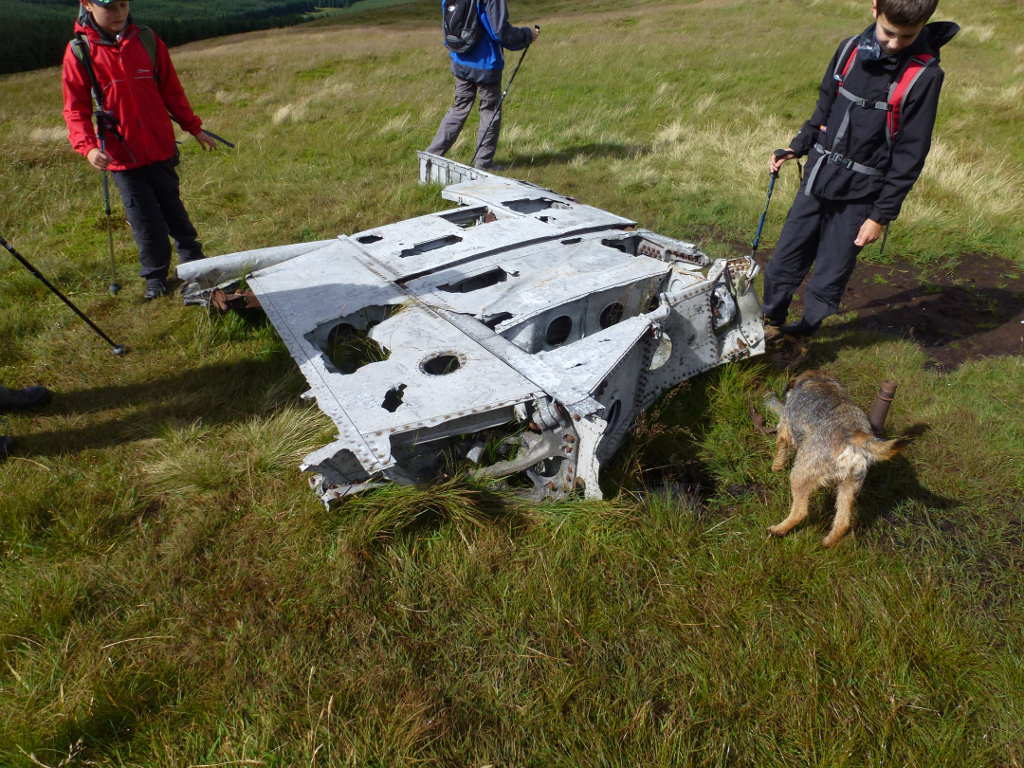 Rolls Royce 37Ltr Griffon Aircraft engine. This was an earlier version of the Merlin that powered the Spitfire in WW2. The Griffon was 10Ltr bigger than the Merlin and produced around the same power. But it was much lower revving and was designed for planes operating at lower altitudes. The lower revs made for a more fuel efficient engine. The manifolds, cam shafts, carburetors, supercharge, propeller drive and rocker covers have been removed. Maybe this happened when the plane was first crashed as they were salvageable. You can see the damage to the sump by my foot. The propeller attached to he left hand side in this photo. 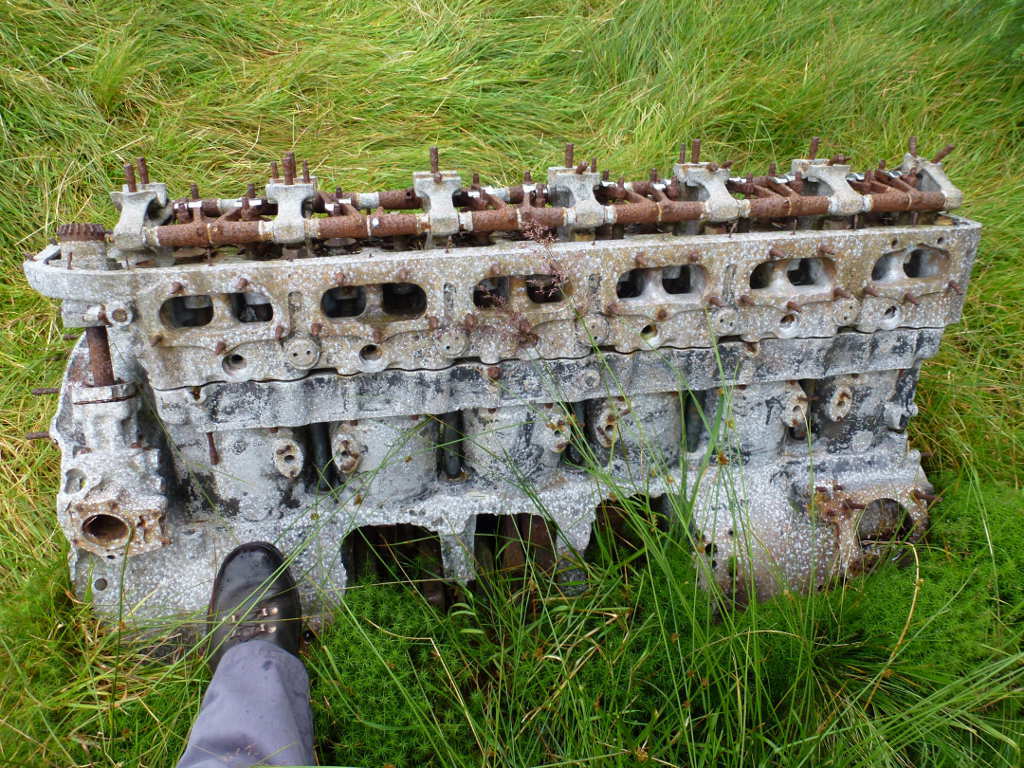 Looking into the V showing the other band of cylinders in this V12 engine. The carbs and inlet manifolds would have been in the centre of the V. The engine is a 4 valve per cylinder with gear driven overhead cams acting directly onto the rocker arms. Just like a modern engine but this was designed in 1933! 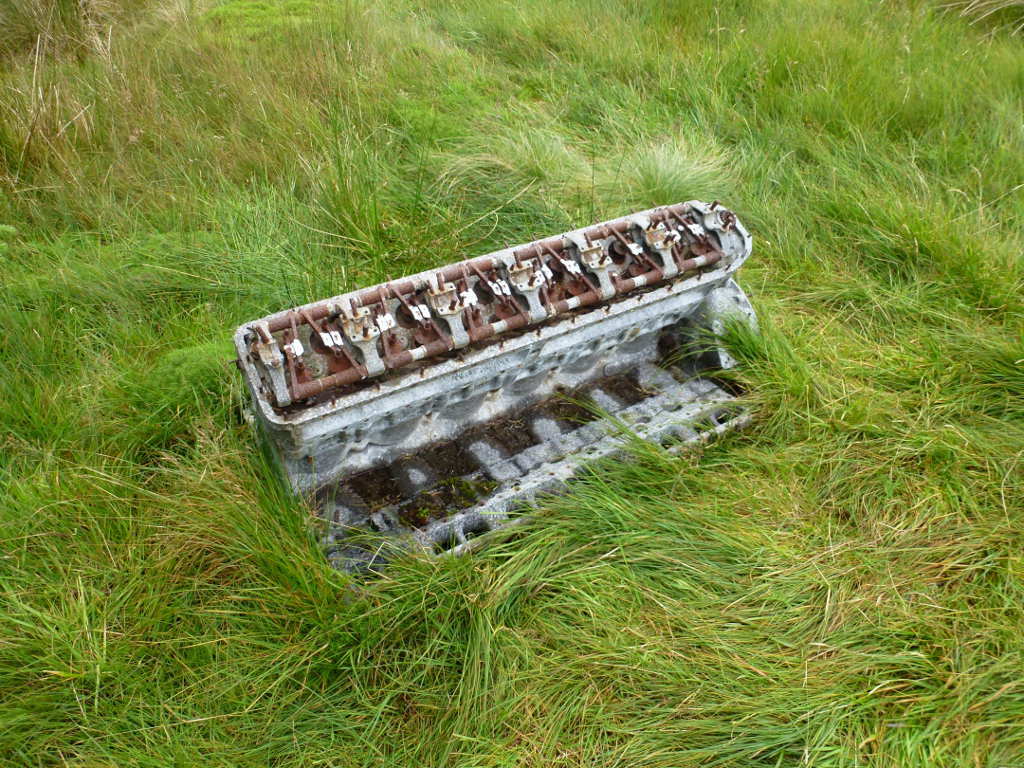 Detail of the rockers. Despite being in the Scottish weather for 65 years, you can see the moly-chrome finish has not rusted where the cam lobes would have acted. 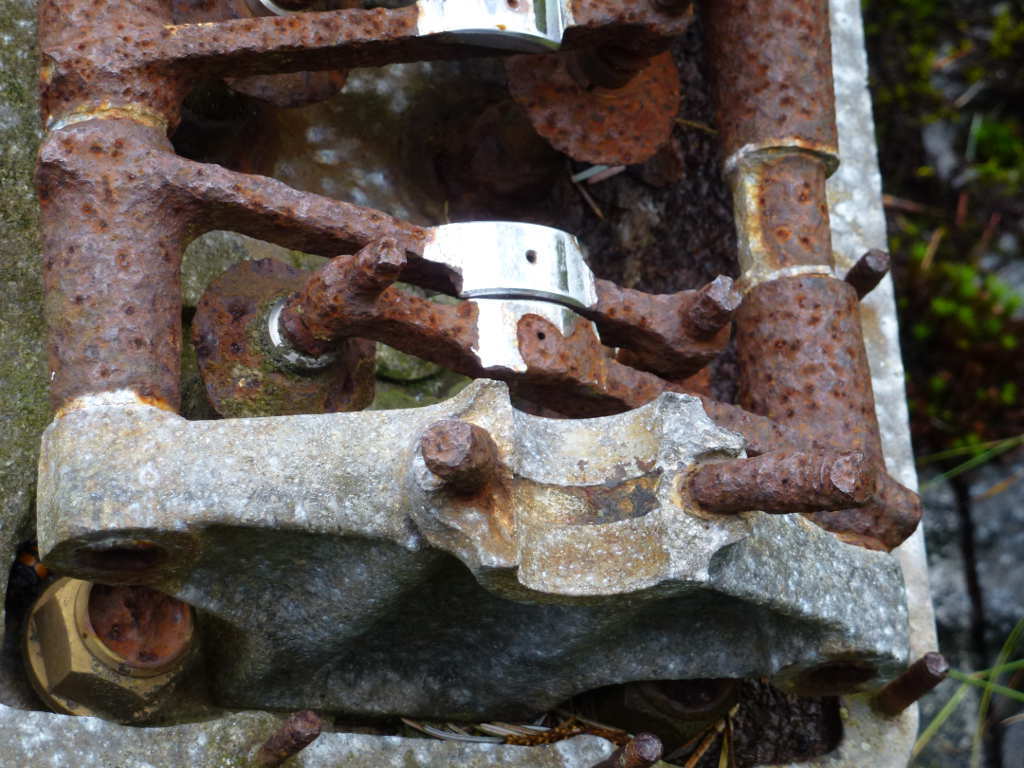 Finally on the walk back I spotted the worlds most “pregnant” fir tree. I don’t recall ever seeing a tree with so many pine cones hanging on it! 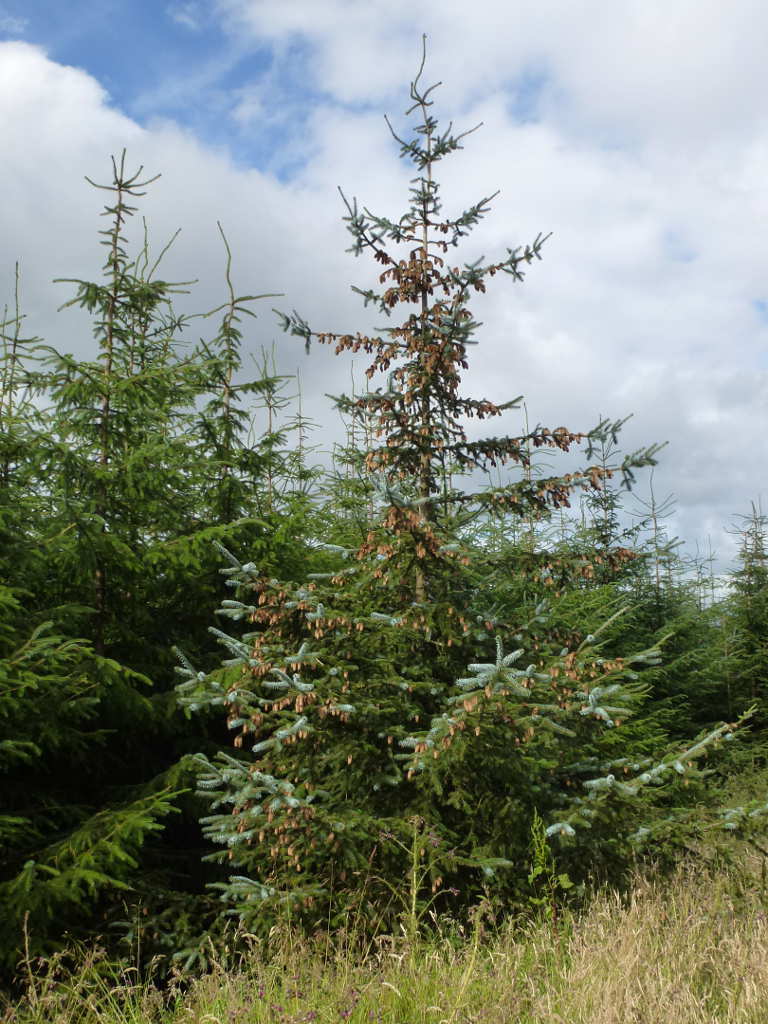 And good to work you on one of the summits I ‘cut’ my feet on as a youth.

Interestingly we had some friends around last night for dinner, and one of the women was into psychic phenomenons. She asked if any of us had any sort of strange experiences? So I related this one to her:

I must have been about 14/15 years of age and the Campsies (the hills to the north of Glasgow that the Meikle Bin resides) as mentioned above were my training ground for map reading and navigating. It was a beautiful winters day with a good covering of snow on the ground and a lovely blue sky with hardly a cloud. Visibility was excellent.

Having spent a short time enjoying the view from the summit of the Meikle Bin I descended to the ‘toll’ road that runs between Lennoxtown and Fintry. Arriving at the road I sat down to enjoy my ‘jelly piece’ and coffee. Casually looking back up to the summit trig (now where I was sitting was maybe about 1Km from the summit and as I mentioned there was excellent visibility and of course as a youth the ‘old’ eyesight was in pretty good shape) I saw this white ‘entity’ - it was like a cloud (but more of a cotton wool consistency) slowly circling the trig point. At that time the OS kept the trigs well maintained with the trig’s white showing well against the blue sky. The entity was twice the height of the trig and slowly rotated around the trig obscuring it as it rotated finally disappearing instantly (there one minute gone the next). The whole incident lasted I think for no more than a minute?

As usual I was on my own so unfortunately nobody could verify my experience. Now as you mentioned Andy about the plane crash, was it some presence that resides on the summit as a result of the crash. Interesting don’t you think?

I’ve just scared myself to death! I think I have to think seriously about visiting any more of these SOTA ghostly summits?

Shame I missed you Andy. Meikle Bin is one of my all time favourite hills, topped it a couple of times and always enjoyed it, the views, as your photos show, are fantastic. Strange I worked Jack on both occasions it must be his ‘spiritual’ home.

- they’re a species of Russula fungus. Some of which are edible (e.g. Bare-toothed Russula), but the majority would give you the collywobbles or worse… And your other 'shrooms are about as close to Chantarelles as a seahorse is to a Grand National winner - you can’t win 'em all Andy!

I did say “maybe”

I’d be reluctant to eat wild mushrooms even if I went foraging with an expert. Especially since a famous author (whose name escapes me now, not that famous obviously) and keen forager mixed up some toxic with tasty 'shrooms. A few of his party died and those that survived have barely functioning livers.