I’m meant to be retiring this year and meant to be working a 4 day weak in preparation. However, we are rather busy at work so the 4 day has been put back as me and my colleagues are doing the unspeakable, working longer weeks! Couple that with the fact the WX over the last few weekends has been diabolical and I was getting cabin fever. The WX forecast for yesterday, Monday, was for a bit of sun but essentially not much wind and no rain. If you saw the rain on Sunday you would have been expecting Noah to come round collecting animals. I managed to get a big chunk of my stuff working last Friday and so treated myself to a day off.

I haven’t done Meall Buidhe for nearly 14 years. It’s at the top of the lovely Glen Ogle and there is a car park and a hardcore track 3/4 of the way to the summit. There was, but I haven’t seen it for a few years, a burger van in the car park popular with the sports bikers. They did the most amazing mugs of tea with free refills using the local stream water. Oh and a bacon and venison roll to die for. Sadly not there today, maybe weekends and summer only. I was the only car in the car park at 9.20am.

Now I do remember that once you leave the track the ground at the top is very uneven with heather, more heather and a lot of soft boggy ground. I’m not sure the bogs are big enough to swallow a whole man but some look deeper than a boot. With that in mind I put my gaiters on at the car. I only wear them when there’s snow nowadays. Quick drying trousers may get wet at the cuffs but dry out quickly and gaiters do have a tendency to restrict sweat from your boots escaping via your socks. I have a pair of eXtremities Goretex ones which work well, you don’t get too hot and they can breathe. You do feel a little hotter in the boot but not much. Out of the bag they came and on went the first one. Immediately I was able to completely screw up the zip. I don’t know how but the ends where misaligned by several centimetres. Grr! I could neither undo the zip or wear the gaiter like this. With a struggle I managed to get the partial fastened gaiter off. Then there was a lesson in industrial level swearing for 15mins as I struggled with a penknife expanding the zipper until I could separate the two pieces of zip. Then a moment with a pair of pliers to close it back and… Take two. This time it went on properly as did the other. Well that was 20mins wasted but I had arrived early and was now setting off at the time I expected to.

When I did this years ago, the gate on the track was locked. The track leads to a mast which is used for local emergency services radio and mobile phones hence the locks. The gate now has more locks since then. But the fence at the side is damaged by people sneaking through. I remembered this from last time and was through the missing section. Then I stood up and saw the wooden gate next to the metal 8ft gate. Doh! Well getting out will be easier.

The walk through the woods was pleasant but everywhere was very wet. All the streams were really flowing fast. In fact on the drive up there were plenty of artificial rivers running off the hills crossing the roads and the fields in the flatter area near Stirling were flooded. It’s trivial and the zig-zags make the ascent very easy. Finally you are at the mast and the equipment huts. 14 years ago there was graffiti on one of the white huts saying “please paint me green”. Well the hut was as white as ever but the graffiti was fading now.

From here it’s wild walking over rough ground with heather, more heather, boggy bits and rough moorland. There’s plenty of gulleys and groughs and lots of up and down. The bottom of the gulleys where all filled with thick black gloopy peat, to be avoided. So the walk was a bit random to find the best ground but essential you go up till you can’t go up any more. The ground is quite featureless but the mast is visible from the summit so you know which way to go home. Nearer the top the ground does improve and then there is the wee cairn.

The WX had been 15% blue sky with the cloud base around 850m. There was no wind at the car park but a strong wind from the NW at the top. Just as the forecast said. I dropped off he SE edge of the flat top to get some shelter and setup. I was planning 17/20/30m then LF but the LF dipole came out of the bag first so I started on 60m. I was able to bag 9 QSOs which I thought was not bad for a Monday late morning. After that it was 40m and I really can’t be bothered with some of the nonsense you find on 40m SSB but when tuning for somewhere to call I found the WAB net in full flow. Ah, that’ll do nicely. I called in and the net controller, Mark G1PIE, knew I was a SOTA op and he knew I was possibly somewhere tasty for the WAB chasers as I would not be parked by a road so he ran the list past me and that was that. 14 simple QSOs in 6 minutes. Job done!

I then had a brain storm and failed to do 40m CW and went straight to 30m, not sure why I forgot about 40m CW. But wow was 30m good. There was talk about why we don’t use split on here and I said the pileups aren’t big enough but I did think about it yesterday as there were many chasers on 30m. I can’t remember when I last worked 35 chasers on 30m. And again around lunchtime on a Monday not on a weekend. That was a hoot with SM, F, DL, HB9, OK, OH, I, PA, SP, PA, UW, EA, G, SV, 9A. SV2RUJ was workable but not strong with much QSB whilst Andy UW8SM was a strong and easy QSO.

Most of my essential chasers had now appeared (G0RQL, SM5LNE, EA2DT, SA4BLM, F4WBN etc.) but one call was missing: where was Eric F5JKK? I swapped antennas for 20m and bang, there he was 599+++ a super strong signal. I worked a total of 10 more EU stations. The callers dried up, sure I could keep calling and work the odd extra chase but I had been on the summit for over 2hrs now and was getting a bit cold and stiff. I had non stop wind buffeting albeit less that at the true top and 3 hail showers had blown through along with some sunny intervals. Time to go. Up to the cairn for some photos. Now I have changed a setting on my camera when I was reading the manual and landscapes don’t look so good so I need to fix that. I’ll post pictures when I’ve tweaked them in GIMP to get the exposure better.

At the cairn I could see someone walking up. Now you just don’t ever meet other walkers on these summits. It’s why I like them. That was this walkers thoughts too. But we had a chat and laugh about each other being on “my” hill. He remembered me from another summit because of the fishing pole on my bag. Well maybe it was another GM SOTA person. He whizzed up to cairn and back in no time and caught up with me and we walked out together, putting the world to rights as we walked. Excellent end to a great day.

Now 69 QSOs around lunchtime on a Monday stands out as very unusual to me. Is this some well kept secret for those of us still toiling 5days/week? Normally mid-week activations are quite quiet but this was wonderful and makes up and coming retirement look even better

I’m not sure what caused this but it’s clear solar conditions are improving after the minimum. Also I was on a fairly steep slope facing SE, probably 45% and getting steeper as you descended. Whatever it was, it was one of my most enjoyable activations for some time.

I checked when I got home and saw Colwyn’s report about the walker’s gate and the gate in the deer fence on the 5th hairpin. Should have read that before climbing the hill

Most of my activations are on a Thursday or Friday. There has been a steady increase in the average number of QSOs I get on an activation since I got back into SOTA in July last year. This could be down to sunspots, the time of year, an increase in chasers, who knows. But midweek activations work well with no contests to worry about. By greatest number of QSOs was 50. That was an afternoon whereas most are in the morning so there are a lot of factors that affect it.

I “retired” in 2013 and then un-retired in 2015, but only 3 days a week (hence the Thursday and Friday activations) so I think your proposed 4 days is overworking. 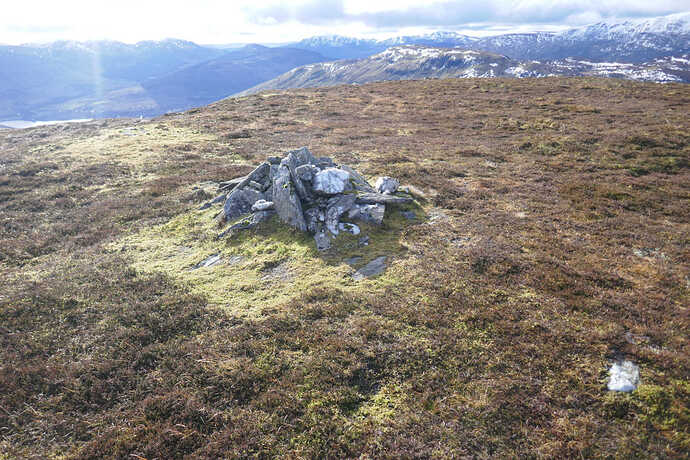 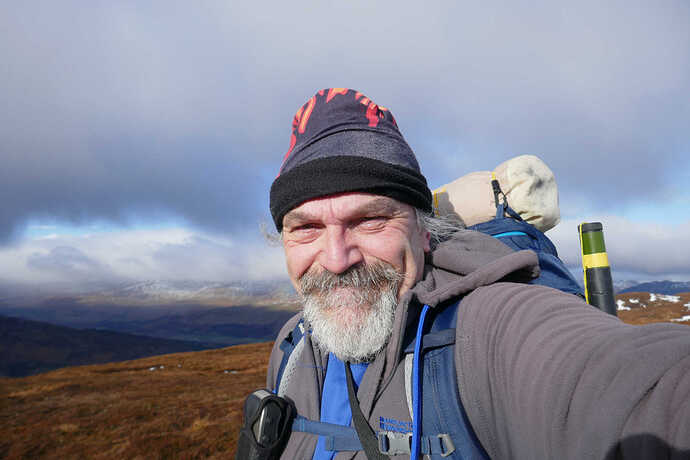 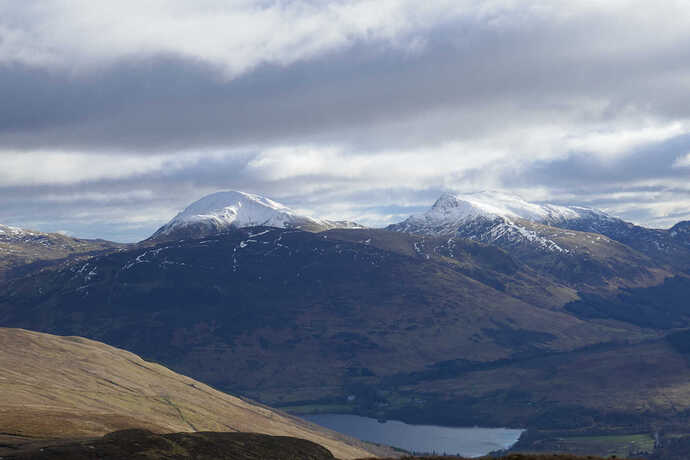 Panorama looking SE over Lochearnhead, Loch Earn and the mountains along its Southern Coast.

I think I have changed the metering mode which is why the exposure is dark on some views.

That’s a remarkable number of QSOs as you say.

But in your retirement, when it happens, you can learn new skills.

Done with the mobile app Adobe Photoshop Lightroom using a graduated filter to increase the exposure of the lower half of the image.

Yes, it helps if you upload the image with the edited levels! That’s a nice filter John. I just pulled the levels about a bit.

Good activation. I like all the HF bands for their differing characteristics but if I were forced to choose just one band for SOTA, it would be 30m. Never had a problem getting loads of pan-EU contacts when I operate (usually middle of the day, weekdays). Can’t remember ever having poor propagation. Operators usually more polite than on some bands I won’t mention.

The 14th was Valentine’s Day

and XYL took my full attention, happy to have been able to find you on 20m with a very good signal

if I were forced to choose just one band for SOTA, it would be 30m.

30 metres has always been a firm favourite with me…

Me too Victor… after 2m SSB of course.

Many thanks for the excellent report and photos Andy. The summit is on my radar for a winter bonus activation sometime. I was definitely encouraged by the fact that you only spent one paragraph describing your experience of the ground above the track.