Machesna Mountain, W6/SC-082. I believe it is the highest peak in the La Panza Range at 4052 ft. It is in the Machesna Wilderness and therefore is not accessible by any motor driven vehicle. It is about a 5 mile hike from the trailhead off the Pine Mountain OHV trail in the La Panza OHV area. It had never been activated. 4 SOTA points.

I have worshiped this mountain from afar for quite a while. It can be seen from a lot of places in my area. It sits next to Pine Mountain, W6/SC-104 which I did last year and will never do again, it’s just to over grown. I looked at Machesna Mountain and thought “I can’t hike that far”. My last couple of hikes I have felt pretty strong and I convinced myself I could do it! Here is the tale of me conquering my fear.

The alarm went off at 4am, I rolled out of bed and hit the shower thinking “what am I doing”. The coffee was done by the time I got out and I slurped it down trying to wake up. I had set an alert on the SOTA Watch website for 9 am +6, not knowing how long it would take me to drive and hike to the summit. I had everything in the truck so I got in and drove into the darkness. I had to go into town to get gas and I stopped at the McDonalds next door. The McGriddle was just enough sugar to get me going. To get to the trail head I have to drive on a lot of dirt to get there. I took Hi Mountain Road to Pozo then into the La Panza OHV area. Pine Mountain Road OHV trail is a good trail for a Jeep but my truck is a bit longer. Past the trailhead is where the hard trail starts so I knew I could do it in my truck. There is just enough space to park one vehicle at the trailhead, lucky no one else was there!

I arrived at the trail head about 7:30AM, All I could think of was “am I really going to do this?”. I got out of the truck and put all my gear on. I turned on the GPS and sent the message on my InReach “Starting my hike, the jeep is parked here” (it makes my wife happy). I headed out. It was a cool and clear morning in the mid 50’s. The views were spectacular. I could see into the Carrizo Plain, Cuyama Valley, Cerro Noroeste, and back into Pozo. I could even make out the Sierras way out there.

The trail is not used very much and is over grown in places but there is a path. There were motorcycle tracks which is not cool, being in wilderness. I trekked on, there are 3 healthy uphill sections on this hike not including the last section up Machesna. I got to the first one and it took me about 15 mins of huffing and puffing but I made it and I still felt good. This is when I realized I could do it! The hike progressed on. At the 3.5 mile mark there was a cattle pond in a small valley. This is where I took my first break. I sat for about 20 mins looking at the pond eating a Cliff Bar and think how pretty this was. The next bit was a climb to the ridge where the turn off was for Machesna. I made it in a fair amount of time, my left foot was in a bit of pain but I was okay, I need new boots.

I got to the turn off and Machesna was fully in view. I could see the old trail heading up to it. I stopped and took my boots off to get the rocks and twigs out. It felt good to do that, I almost did not what to put them back on. I started down the trail and got to a section where the trail disappeared. I had come this far and a bush whack was not going to stop me. It was about 200 yards to the summit. The brush was up over my head in places. There was no discernable trail I could see. I made it to the top and the brush opened up to hip high. I waded toward some rocks and found the summit marker. Next to the big rock I found a summit register and I put my SOTA card in it. I took a few pictures and then proceeded to set up the HF antenna. I then got on top of a rock and set up the radio and just sat for a moment looking at the view.

I started out with my 2 meter HT just to get that out of the way. I actually had cell service here! I sent a spot for 146.580 fm and called cq. The first person to answer was Dan AK6DM back home in Arroyo Grande. He was loud and full quieting I gave him a 59! It was about 20 miles I thought to myself, “Dan was the first contact from a summit that had never been activated before”, wow! Then I got a call from a couple of guys in Paso Robles about 40 miles. I even got a call from Esther KK6AD from my home QTH!. That was all fun but HF was waiting.

I fired up the KX2 on 20 meters, it was wall to wall CW from the ARRL DX CW contest. I looked for a clear frequency but gave up. I saw a spot for W6/JL1SDA he was on Waterman Mountain, W6/CT-012 on 40 meters SSB. I tuned in and he was loud, I gave him a 57. I found several other summit 2 summit on 40 meters SSB. I then called CQ on 40 meter CW. Jon K6LDQ was the first to answer. I worked several others and then jumped around on different bands working summit 2 summit and calling CQ. It was about 1PM and I knew I had to hike back. I saw a spot for N1CLC on 17 meters but I never heard him. I waited a few mins hoping he would switch to 40 meters but he did not. I then saw a spot for WG0AT Steve on Mount Morrison, W0C/FR-092 in Colorado. I tuned in and there he was. It took me a few tries but I got him! I figured after that I was done.

I packed up and started the long hike home. Finding my way out was not easy wading through the hip high brush. I had to keep looking at the track on my GPS to get going in the right direction. I came out of the brush and started down the trail. Past the pond and up and down. I was hiking and heard motorcycles coming from behind me I jumped off the trail and 3 dirt bikes came up and stopped. The lead guy said “where did you come from, we are in the middle of nowhere?”. I told him where I had been. He said “wow!”. We talked for a min and they went on. I did not bark about the rules. Should I have? Oh well.

The rest of the hike was long. I lost steam about a mile from the truck and was stumbling a bit. I made it back to the truck and sat and ate the rest of my sandwich from lunch. WHEW!

Another great day in the mountains!!

Thanks chasers and activators! 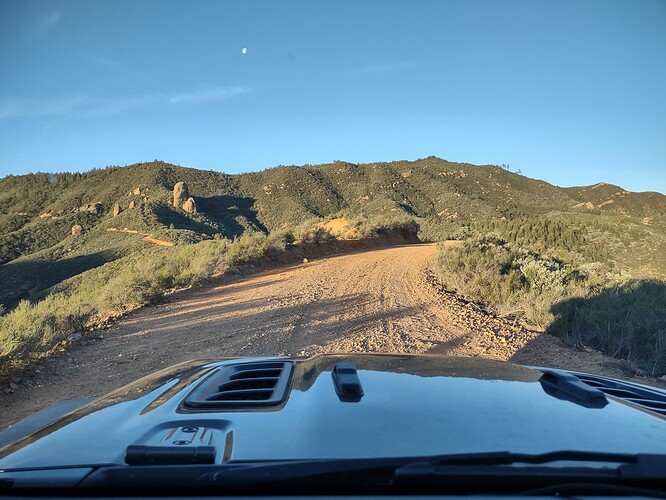 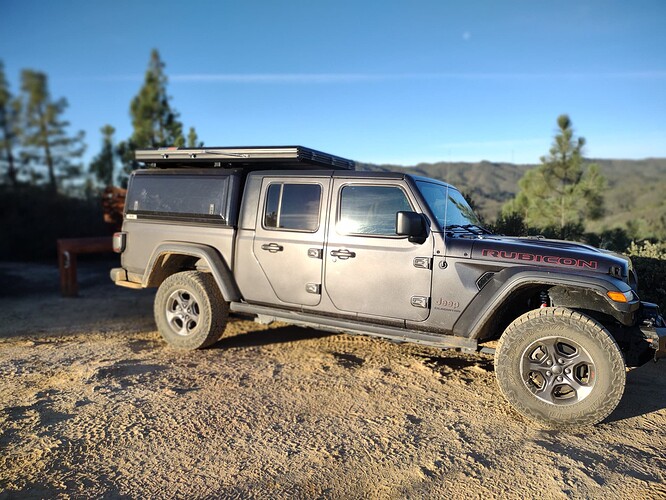 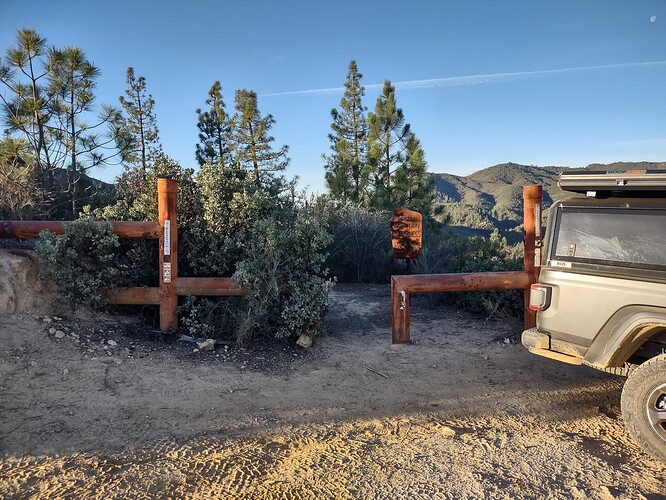 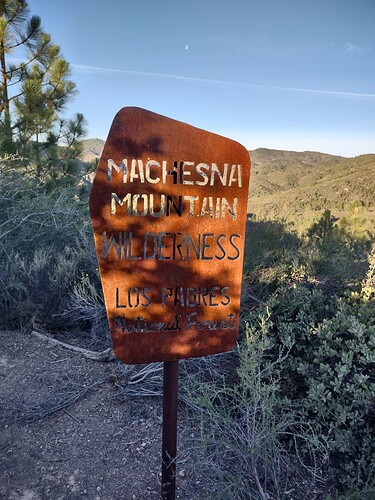 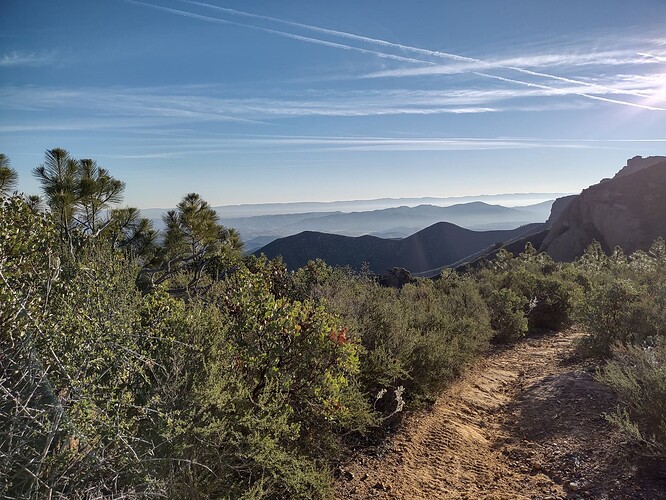 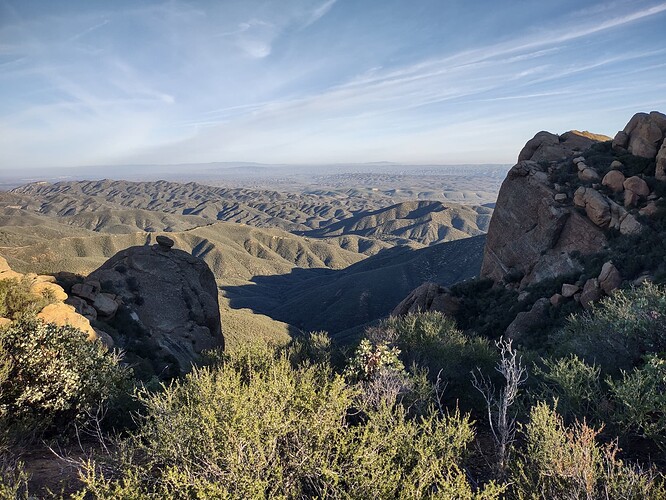 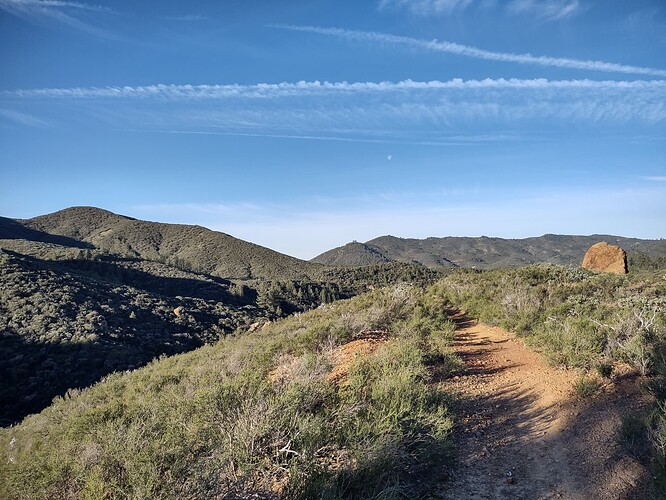 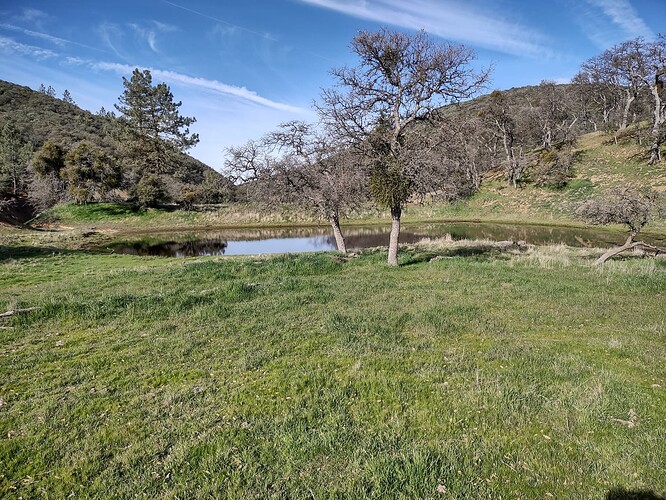 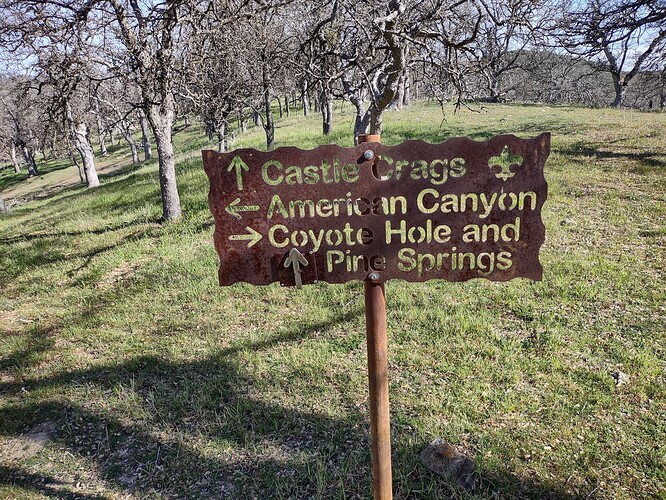 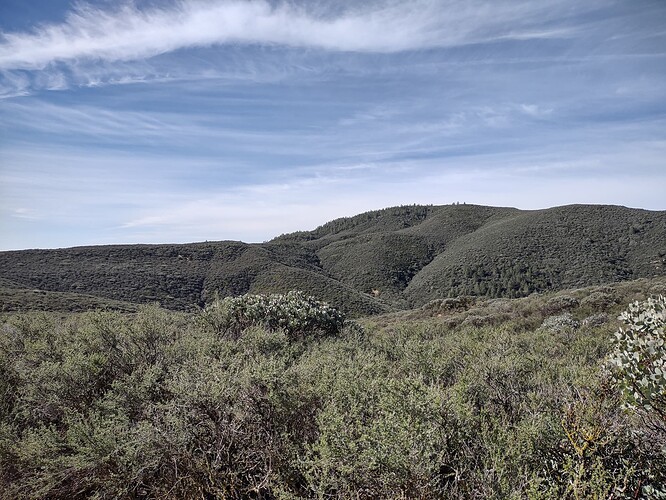 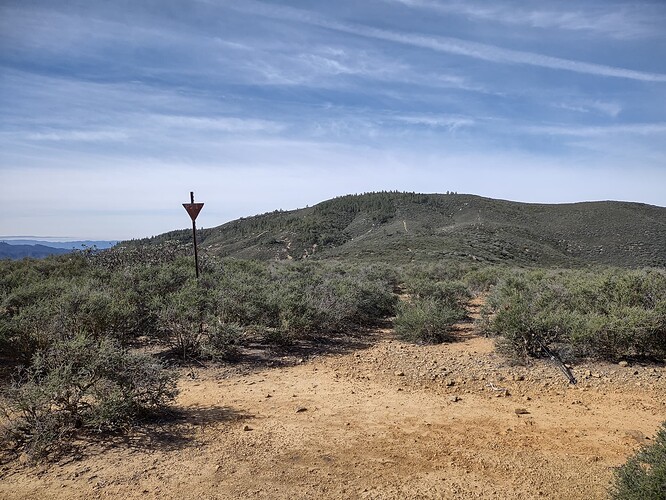 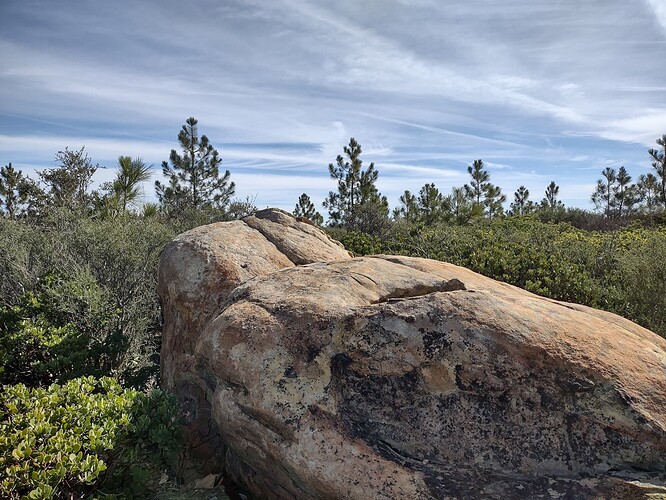 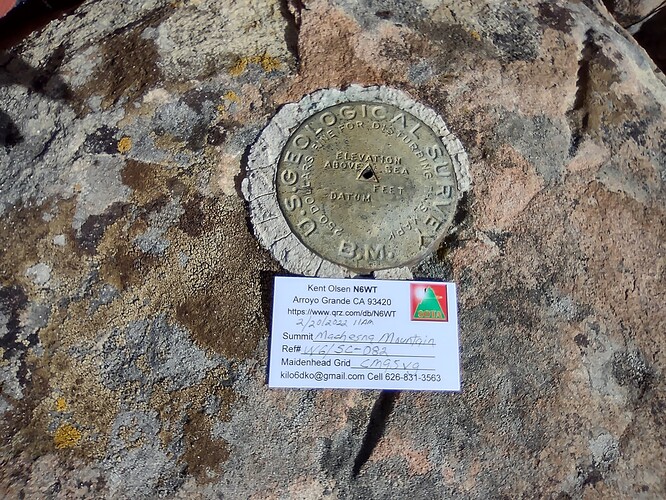 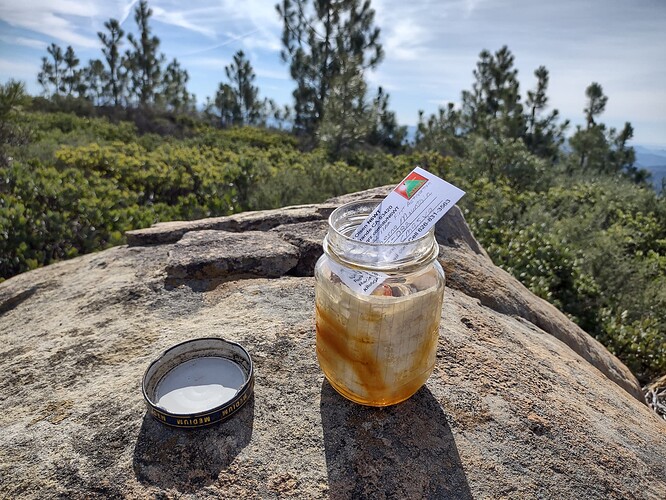 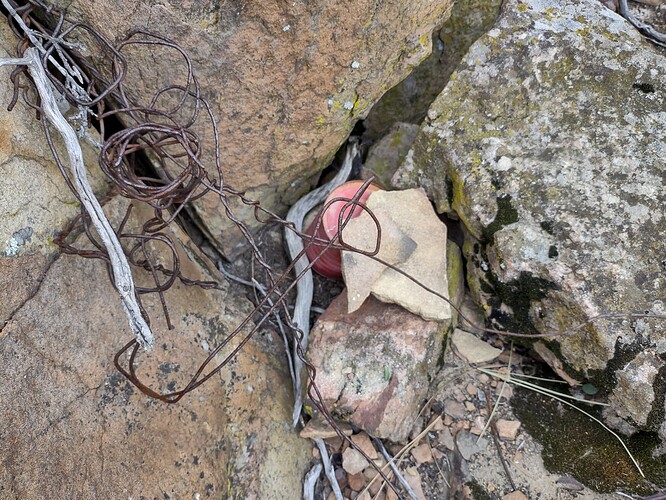 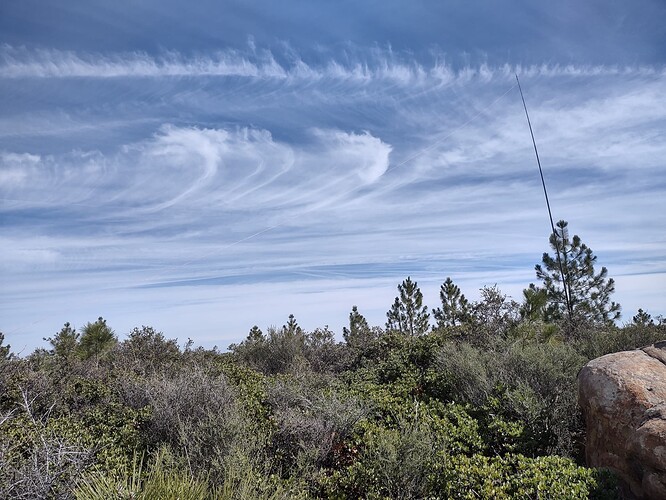 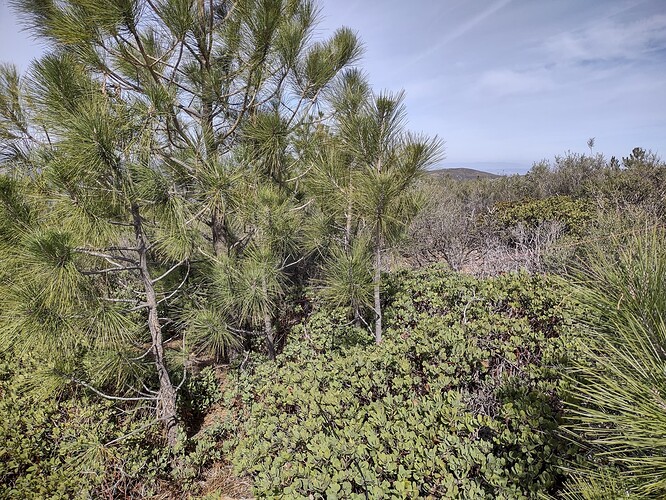 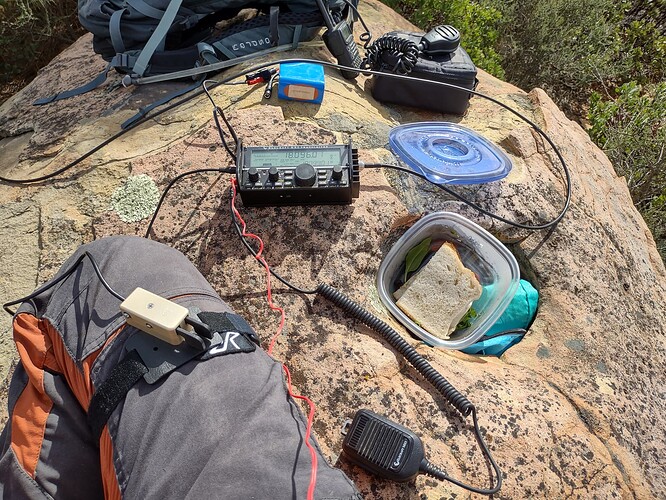 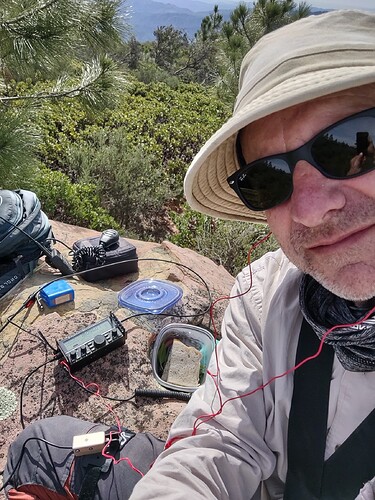 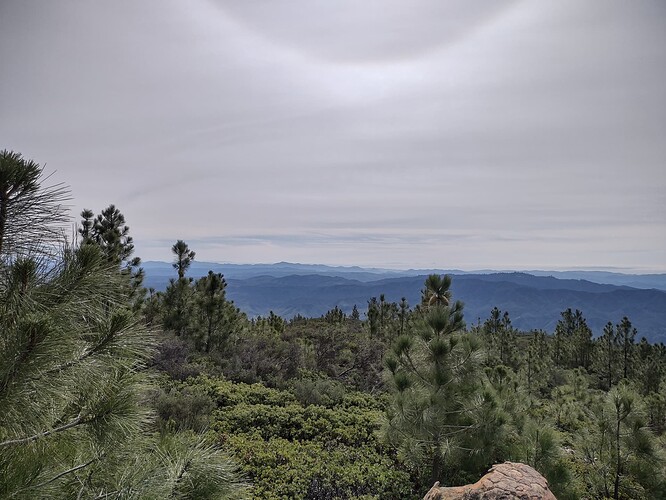 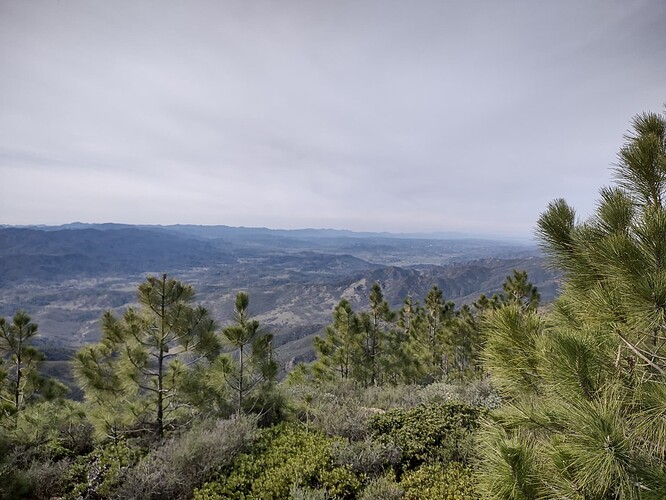 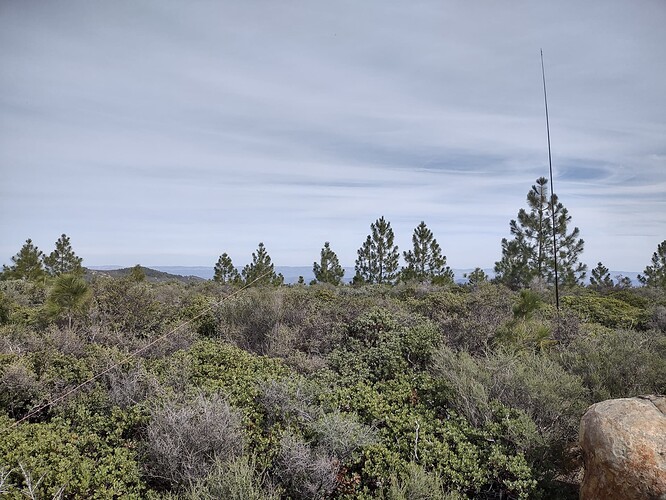 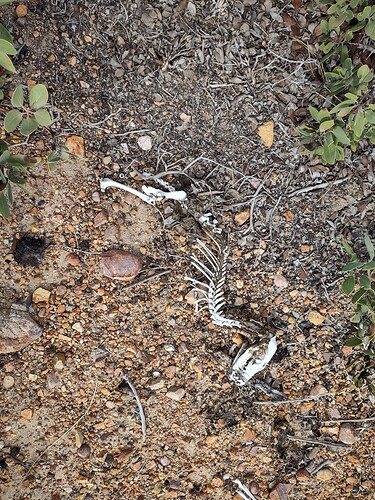 Hi Kent, great report and photos. Thanks for the write up.

What a great expedition Kent. Well done on getting the first activation. My wife and I had amazing back-country trips in California in 2013 and 2017. I regret to say that I didnt do SOTA back then. It would have added to the experience.