I applied for a new job back in April, I was pleased, and a little surprised, when I got offered the position. I have been working in electronics for 20 years, starting off by doing work experience at the Bradford based displays company Microvitec as a teenager. I have been working my notice period since May and I finally left my old job on Wednesday after 9 years at the same company. I’ve had a bit of an itch to climb Scafell Pike again for a while, and with having a little break until I start my new job with the local Parish Council, yesterday presented the perfect opportunity.

I left home at around 0540(BST) and the 97 mile drive to the Wasdale National Trust car park was tedious but I arrived just after 0800(BST). The guy in the car park pushing National Trust memberships was doing his best to feed false information to walkers, stating that the weather on Scafell would be very wet, extremely windy, and very cold with severe wind chill, I told him to stop pulling my leg, but he was deadly serious. Thankfully, I’ve learned to decode the MWIS forecasts and I generally find them very good but the wind speeds are very often over-egged, and so it proved to be yesterday. The wind was nothing more than a breeze with a few gusts every so often. The temperature was as to be expected on England’s highest mountain and whilst the cloud was low, it wasn’t wet at the summit - exactly as the MWIS forecast had predicted.

I reached the summit of Scafell Pike at 1000(BST), after passing a few walkers on the way up, I had the summit to myself for a while. After taking a few photos and sending a text message to my wife, I took out my FT60 handheld and gave a call on 145.500 FM. I was pleased to pick up 4 QSO’s in a relatively short time. I had a request for 70cm, but I explained that I didn’t know how to change bands! I don’t use my handheld radio often, I’d bought it to replace a VX150 which got water damaged after a very wet experience staffing a checkpoint for RAYNET on High Street G/LD-011 for the Ian Hodgson Mountain Relay race some years ago. I decided some time ago that RAYNET wasn’t for me, the service isn’t as valued as it might be in other countries. Having given up RAYNET, my handheld very rarely makes it out of my cupboard! I had tried to switch bands on mt FT60 some time ago and not been able to, so I left it on 2 metres. I’d agreed to the caller that I’d reappear on 145.400 if I couldn’t figure out why my radio wouldn’t change bands, and that’s what happened.

I was a little undecided whether to set up my HF CW station, having already made enough QSO’s for the points. In the end I decided to give 30m CW a go. I’d just got the KD1JV Mountain Topper fired up and I heard W1MK calling CQ DX. I thought my chances of working across the pond were slim but I called W1MK anyway, he very nearly got my call sign but then gave up and went back to calling CQ. Almost - what a story that would have been! I moved up to 10.119 and after a few CQ’s I was found by a few chasers, including Mirko S52CU/P on S5/TK-025. Awesome to get an unexpected S2S in the log, thanks Mirko!

The descent was uneventful, I’m glad I’d gone early, as hoards of people were now ascending to the summit, seemingly on a charity fundraising event.

A great, but long, day out, nice to have had the chance to do Scafell Pike once more. Thanks to the chasers for always being there!

I grabbed the FT60 instruction book a bit later and found that if you press the MONI key (on side) whilst powering on the radio, you can make the radio work on just VHF, just UHF or all bands. I have now set my radio to work on all bands, so 70cm should be possible next time! 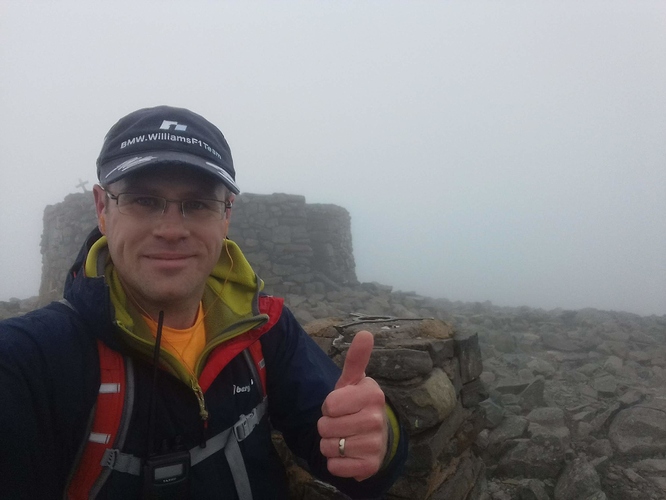 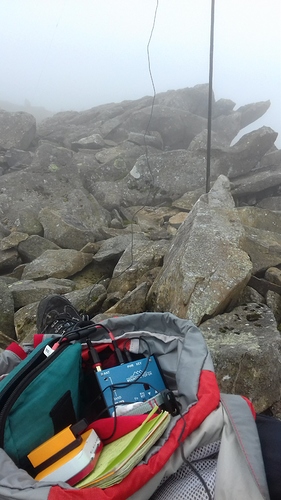 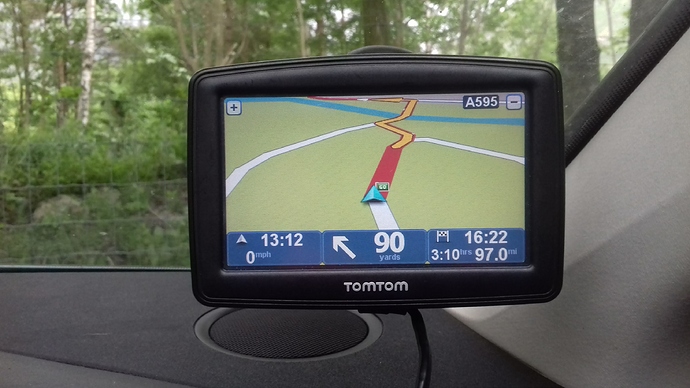 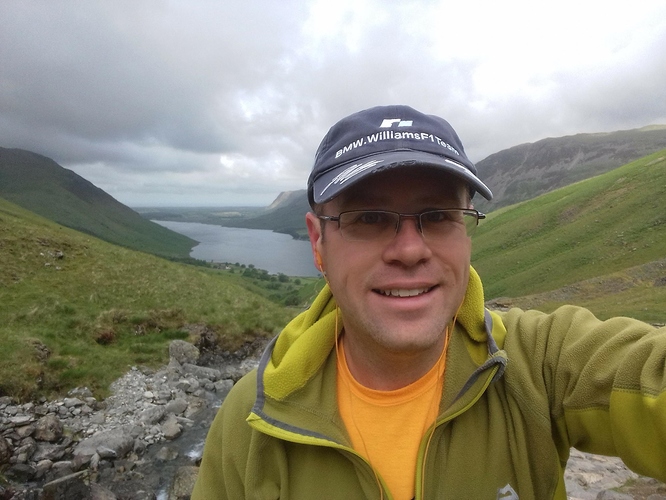 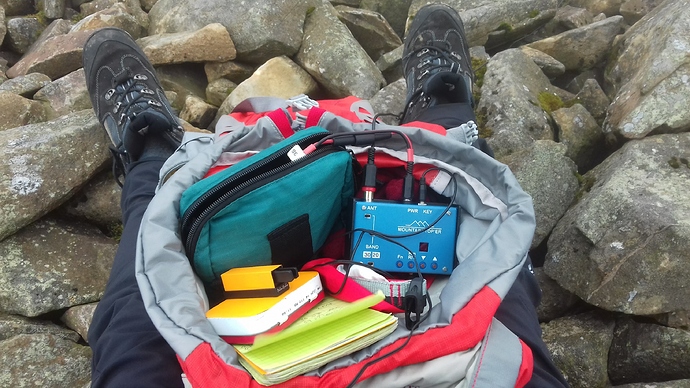 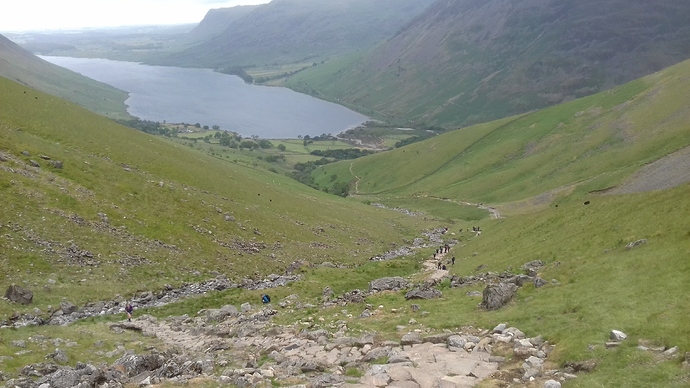 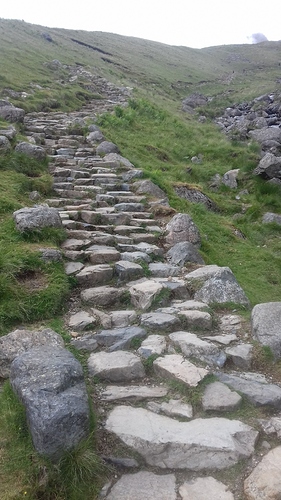 Back in the States you occasionally run into park rangers that over dramatize the difficulty of a trail. Like the weather you mentioned I guess when confronted with such a broad cross section of skills and experience, you inevitably get some that err on side of caution and paint a bleaker picture than necessary. Sometimes that’s good other times frustrating.

I called W1MK anyway, he very nearly got my call sign

You should have been running QRO Colin, say from an 817.

I have worked across the pond several times on 30m CW with mine, but I suspect conditions are as bad as they can be at the moment. I had a similar experience in April this year of an “almost QSO” on 30m across the pond. Nipping up to 20m provided the propagation on that occasion and I was chased successfully there.

Many thanks for the report and photos. It looks a bit like it was in July 2010 when I activated the summit for my Goat, though probably less of the misty stuff on the ascent / descent. On that occasion, the beer provided by Paul G4MD compensated for the complete lack of views!

Nice views down onto Wastwater, thanks!

Well done!
Thanks for the nice report and pics.
Good luck and best wishes for you on the new job.

I remember the good old days, working Bill W4ZV with a 400mW RockMite on 30m! The MTR and FT817 are pretty evenly matched on power output actually, I get 4+ Watts when using a 3S lipo (like I was yesterday).

Scafell almost always seems to be misty, I guess it’s due to its location just inland of the sea. Great reception of 3FM from the Isle of Man by the way, kept me entertained on the ascent!