Early(-ish) morning SOTA today on Loughrigg Fell. With Lake District temperatures peaking around 24 degrees today it didn’t do to be climbing fells midday (mad SOTA ops and dogs and all that). After a few beers at the Royal Oak in Bowness (a slightly less tourist-laden establishment last night, but not by much) the old legs were a little sluggish this morning, but we got there with the aid of a couple of litres of water, and not too much cussing.

I was greeted by the sight of a handie at the trig point accompanied by a fella who was strictly listening - as it happens he had a tip-off that there was going to be some good old boys flying their steel horses through Dunmail Gap. He was resplendent with sizeable Panasonic camcorder and accompanying glass. He recounted similar summit brain tales to SOTA ops, so we bonded with tales of idiocy.

After chewing cud for a while, with not much happening on his radio, I thought I better set mine up. I asked him to give me the nod if the F-15s were going to make an imminent appearance, and retired to a safe distance from the soon-to-be overrun trig point.

With the rewired SOTABeams Band Hopper IV (technically a V now with 20/30/40/60 & 80m), my MiniPA50 amp (which puts out 25 watts) and the FT-817 with underslung Palm Pico Paddles I set off with my first 20m QSO at 09:20 local. The bands seemed to be working OK but with deep QSB that didn’t prevent QSOs just slow them up on occasion (OH3GZ proved very tricky on 20m but I got there after about 5 minutes and headphones, his subsequent call on my second 20m stint a couple of hours later wasn’t an issue).

Between 20m and 40m I worked 4 WWFF stations, mostly putting out strong signals. I dropped to 40m to work HB9AFI/P on HB/VD-027 CW, then continued on 40m SSB for a further 23 contacts. Since finding my FT-817 was already wide-banded (no idea why I didn’t try 60m before opening it up) I enjoyed some very quiet 60m conditions with consistent 59 reports with 6 stations, and even a S2S with Rod M0JLA/P on G/WB-015 when I finally realised the band hopper was clipped completely wrong. The disadvantage of having an amp in the path without a separate SWR meter. Fortunately no damage done and we completed the QSO with the antenna reclipped, albeit still wrong but not quite as wrong as before (facepalm emoji required here). Maybe I need labels on the clip-points, with 4 in the mix. I’ve done this with another antenna and it does take summit brain out of the equation for the most part.

Next was @G8CPZ Andy on Arnside Knott on 2m booming in 59+40 to my Slim J, followed by 7 local contacts including two Wainwrights on the Air contacts with Reg 2E0LDF/P and Stephen 2E0XUP/P on Bowscale Fell, and another SOTA S2S with @M0WCW Colin on Pike of Blisco - relatively new to the SOTA journey but seemingly hooked! If I’d had the zoom camera I could probably have snapped him, being line-of-sight with me. 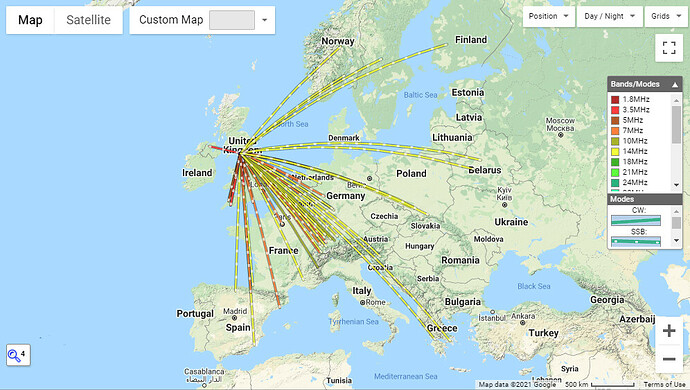 No low flying jets - at some point the guy I’d talked to had bugged out. Glad I didn’t wait in the end!

Need to be brave now and do some more CW activating. Out tomorrow with Andy G8CPZ/P on Place Fell G/LD-027 where I’ll step up to the mark!

Thanks to all the activators, chasers, and other ops who made this such a fun day, but clearly credit must be due to my lucky anvil - it’s a little camera shy at the moment, will try and take a snap tomorrow. I even managed to descend on the correct path this time, so didn’t have the additional 20 minute walk I had last time!

so we bonded with tales of idiocy

Always great when you encounter a like-minded fool. On days when carrying a heavy pack uphill, I keep myself going with the thought that some day I’ll bump into someone carrying a bedstead or similar up a hill for charity…

Great report and lovely pictures! You did better in the QSB that I did yesterday.

Morning Mark and Fraser too,

You got more contacts in half the time it takes me and an awful lot of S2S QSO’s which cost more time due to Ref swapping. Lovely photos, though it does look a bit hot. Hope it cools down a bit for next week.

I have a similar situation. Both my HF SOTA rigs have VSWR selected all the time but with the 817/ amp, there’s nothing to tell you if in mid-activation, the aerial fell over backwards, a wrong link suddenly opened in the breeze or in my case a 160m coil fell out. My amp actually blew up on a CT3 activation and I had to replace the output.

Pity about the aircraft NOT flying the valleys. It reminds me about something my late parents told me. On holiday in 1941 they climbed a hill near Pateley Bridge and watched Wellington bombers flying up the valley below them.

Forget the anvil and do like I do. A bag of cement is more useful if a trig point needs attention. The last time I did Ben Nevis there was a bloke doing just that.

Great report/ nice style and it shows me what Loughrigg looks like having never been there. It was however my ever first S2S. The late Shirley (MW0YLS/ MG-No3) called me from there when I was on Helvellyn in June 2002.

It’s the first time I’ve heard that phrase ‘bugged out’ and I’m assuming it means he left. On the other hand it could mean attacked by midges, flies or ticks; all topical at this time of year so watch out.

Thanks for the photos, report and the unexpected s2s yesterday…sounds as if you are having fun today as well so thanks for the 80m cw contact earlier today.

Always great when you encounter a like-minded fool. On days when carrying a heavy pack uphill, I keep myself going with the thought that some day I’ll bump into someone carrying a bedstead or similar up a hill for charity…

Whilst out walking Green Lanes near Totternhoe Knowles (Dunstable) I encountered a lad carrying a large log. First time I saw him I assumed he was knicking one of the logs put down by farmers to try and stop vehicles entering fields for his bbq, however the next day I saw him again, with the same log, and he just carried on his walk into the distance.

My mum said he’s known for doing this. It’s a hell of a way to exercise!

Hi, M0NOM
Just a little clarification. This is M0WCW, Colin. I was on Arnside Knott G/LD-058 when i had a s2s with you on the 1st June. Not Pike of Blisco.