Today I activated Musick Mountain - W6/SS-388. It took me 3 attempts this year. First time weather was unstable, and I turned back from Hwy 168 near Pine Ride, because rain started, temperature as near frozen point, and I did not care chains.
Next time weather was acceptable, but when I parked my car at the beginning of access road to W6/SS-388 (Musick Peak Road), I realized that I am unable to drive back. It was wet snow, and my car slide further down from the flat portion of the road. Fortunately, another bigger car came, and nice people helped me to pull my car back. I asked them if they can provide me a ride, and they agreed. However, even this 4WD car was unable to handle wet snow and at some point stocked and moved to the side of the road. This time I helped and pushed big car, so they were able to turn around. I think that I lost my spare keys on the back seat of that car. Those people are not local. They are from Santa Barbara area. Driver’s name is Ryan, and he is working from home at this moment. His girlfriend name is Stephany, and she is water engineer. Truck model is Chevy Colorado. Picture is attached. I understand that it is a very small chance that somebody know Ryan or Stephanie, but if you have contact information of HAMs from Santa Barbara, or can help to find those people, I will be very appreciated. Craigslist add did not return any response.
So, during the second attempt I discovered deep wet snow. It took a lot of energy to break trail, and I was very close to the summit. But my feet became wet, temperature decreased, and at that combinations I turned around from not very far from the summit.
2 weeks later I made third attempt. This time I prepared for everything. I took snowshoes and two plastic bags to protect my feet from wet snow. I was very surprised, when I found now snow. I was able to drive to the first junction, and hikes to the top with low hiking shoes. There were just few small patches of snow on the way to the summit.
Thanks you all chasers and activators for contacts today. 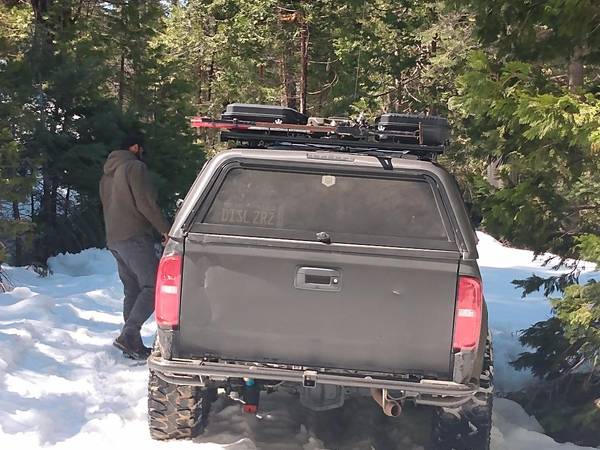 Why don’t you try the police, you have a numberplate sitting behind the back window. If you explain they might be reluctant to try to help out. I know that privacy may be an issue but you could try.

Thank you. Great idea! It is appropriate to contact police, if keys were stolen. Since keys were not stolen, another HAM suggested me to contact Department of Motors Vehicles to identify vehicle owner. I mailed a letter to Santa Barbara DMV today, and will see what will happened.

I received next response from DMV “We are unable to give you an information on vehicle. Sorry for inconvenience. Thank you.”
You may be right - privacy police may not allow to do this.