At last we have some glorious sunny weather! Almost cloudless when I set off on Sunday 30th May for Little Conval and it was the same on arrival at Dufftown Golf club after a 1 hour 15m drive. I’d 'phoned the club earlier in the week to make sure parking would be permitted. 20 deg, so shorts and tee-shirt and factor 50 were the order of the day.
I’d activated Meikle Conval, its near neighbour, just recently so was familiar with most of the pathway but was stymied right at the start of the track recommended by Walkhighlands, which is just up the road from the car park, being confronted after 50 yards by a padlocked gate and a field full of sheep and lambs with no obvious onward path. I therefore decided to walk through Home Farm, the route I had taken coming back from Meikle Conval - I got barked at by the same dogs, which were in a large outside kennel. The human residents however took no notice of me, so I guess they don’t mind walkers.
The path is a good one, zig-zagging all the way to the top up the south flank, with route 1 options cutting off the loops for any fitness freaks;these were handy coming down though. At the top, there is not much of a summit cairn and the trig point is on the north side. The summit is partially ringed by the remains of the ramparts of a hill fort and is fairly flat, covered in bog grass and heather, with frequent water-filled holes which on a foggy day could be unpleasant for the unwary.
I took my soggy shirt off, laid it out to dry in the sun and set up on the south side, during which time
a couple of lady walkers stopped for chat, asked what I was doing and were amazed that 50w could be used to talk to the world. I got 2 other visitors stopping to chat during the day and a party of about a dozen school age kids with minders (scout troop?) appeared around 1.30pm but didn’t disturb me.
QRV a bit later than advertised just before midday local (I’m too optimistic…) and first in the log was a S2S on 40m with DB7MM/P. A good 30min run on 40 followed, which was in good shape to G and EU. With 2 and 6m dead (PropQuest forecast was not good…) I picked up a couple of S2S on 20m, with SV2RUJ/P turning out to be best DX of the day. Took another quick look at 6m and I heard IS0BSI/IM0 calling CQ just above the noise level but he faded out. 10m had some activity but a spot only produced 2 chasers so I returned to 20m and had a good run including 4 more S2S. Switching to 17m brought a 2nd S2S of the day with HB9EAJ/P but few other chasers. Then I saw a spot for Fraser, MM0EFI/P on 40m so went back down there for a quick S2S - he had a cracking signal and a nice pile-up going. Then another S2S with Colwyn MM0YCJ/P, so I stayed on 40m for a bit and had another short run including 2 more S2S. Went back to 20m for a few more S2S and then tried 15m which had some short skip to EU and had a short run there.
Checked on 6m and heard a strong signal which turned out to be from some guys from Aberdeen ARS testing antennae at Clashindarrock cross-country ski centre car park just down the road from me near Rhynie. I was pleased to give Graham GM4OBD/P and Fred GM3ALZ/P some comparison reports. I had worked another of their group, 2M0MVX/P on 40m earlier. I was impressed to learn they were entirely solar powered - no batteries.
Back to 20m, with short skip prevailing which brought another good run, including GB3RS at Bletchley Park operated by Martin. I gave him an audio check as he’d had a bad report earlier - I couldn’t hear anything wrong but commented that it sounded like he was using some speech processing - Martin said this was probably down to the fact that he had to operate the exhibition station wearing a face mask

Seeing a spot for EA2IF/P Guru on 30m, I ventured onto CW for a nice S2S exchange. After that I went back to 20m for the last run of the day. On 17m I heard JS1KSU calling CQ but I couldn’t raise him unfortunately - checking his QRZ page he operates remotely from a station he set up at his mother-in-law’s - very obliging of her

The sun was still shining as I packed up, with a bit of a breeze blowing from the south. As can be seen from the photos, it got cloudier in the afternoon but still nice and warm. Passing through Home Farm again, I encountered a couple of dogs on the loose (not those from the kennel though) and was instantly best friends with a beautiful collie called Beth and a nice black lab whose name I didn’t catch.
The only disappointment of the day (apart from nothing much doing on 6 and 2) happened back at the golf club. Just as I was putting my gear into the car, I heard the clubhouse security gate clang shut, which meant my anticipated pint of cold lager shandy was not going to happen. Oh well, can’t have everything. Cheers everyone.

Operating position, looking towards Meikle Conval and Ben Rinnes. Note - the white is not snow, its a plant (crunchy underfoot). 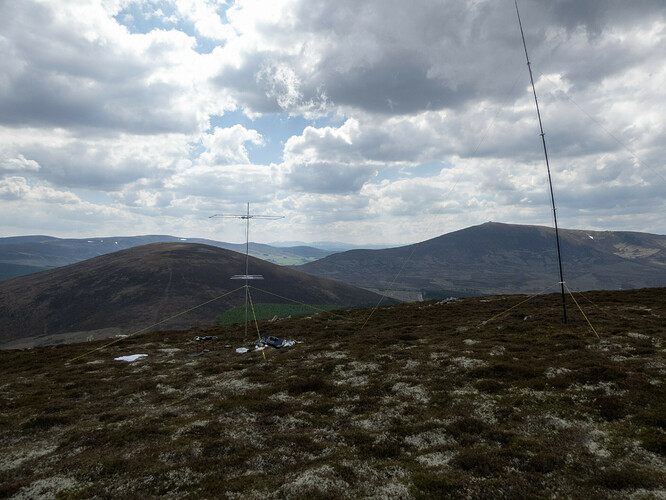 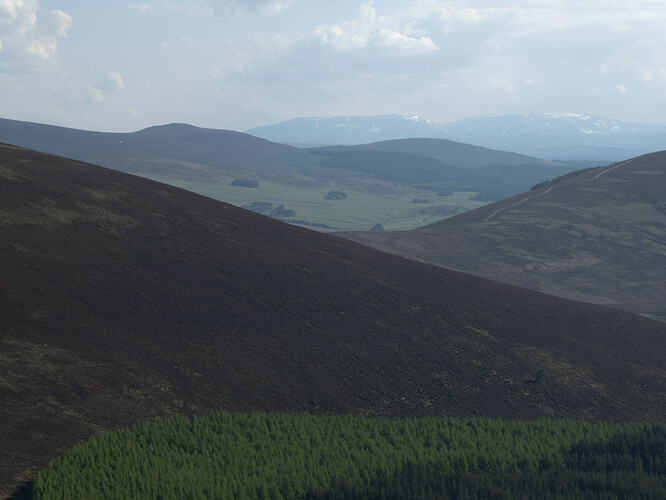 View to the South East, with a little conical bump showing above the hills which I think might be Garbet Hill 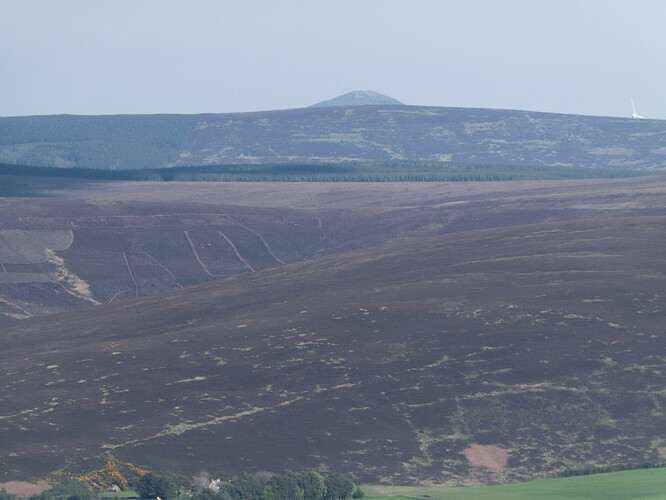 Remains of the hill fort walls 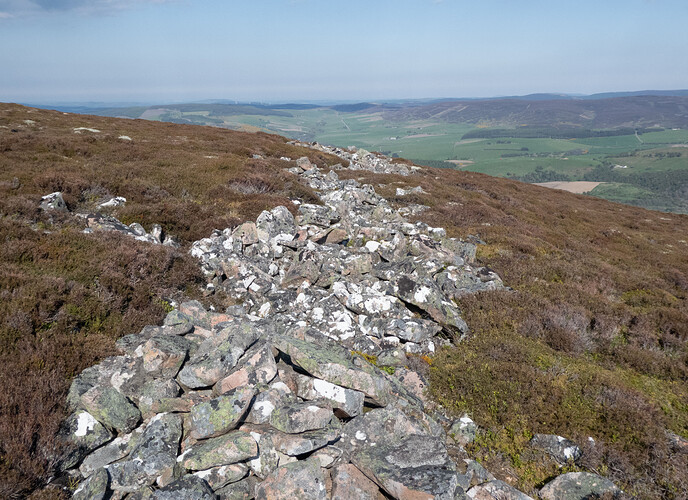 Wind turbines, part of a large wind farm called Dorenell to the south and east 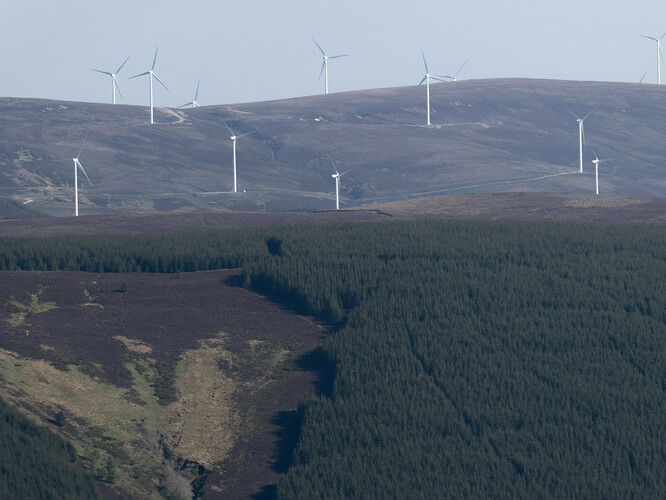 stymied right at the start of the track recommended by Walkhighlands,

Walk straight up from the carpark to the Tee box at the top follow the fairway for a short distance, hop over the fence and you should find a path right to the summit. Long time ago since I was there though!!

Yes, I saw the track beside the car park, but there is nothing on Googlemaps or Bing OS to show a path onward and in general I am loath to wander about on an active golf course - my car parking permission did not include anything else. I knew the Home Farm route would get me there 100%.

Thanks for the report Simon. Great to catch you again on a 40m s2s. Probably almost line of sight from you to me on both occasions. So, are we calling it ground wave or NVIS?

I was very pleased to be able to work you on this one on 20m SSB Simon. The first inter-UK on 20m that I have had for many years. The more that you and Fraser put on these ES summits, the more I am keen to get back up there this year. There’s a few commitments to clear, but I think once they are done with, then a couple of days in the area may be on the cards. That is if something else on the list doesn’t get in the way. Planning is currently on a weekly basis. And I thought it would be easy once I retired.

My first thought would be groundwave. My DX Commander vertical would not be a good NVIS antenna.