Having a little break from my single-band QRP activations of the Welsh Borders by doing a few completes of the Scottish Borders the middle of next week. They are the 1 pointers that loop around The Cheviot.

I’ve turned in the opposite direction this season Carolyn. All my activations are 20m CW QRP!

Hi Carolyn have fun in the SB’s I really enjoyed them! Need most of them for completes so here’s hoping your QRO will make it through my local RF smog…

I live in Morpeth about 20 miles south of Cheviot, summits should be dry underfoot, even if we get lots of rain over the W/E. I should be home most of next week. I monitor 145.500 all day.
Midday propagation has been very poor for a few weeks now, good luck. 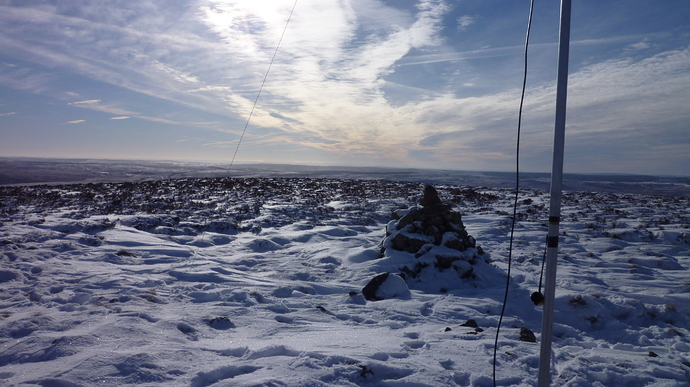 Shillhope Law at minus 9C in February of this year.

I will be in North Northumberland all next week but only with VHF/UHF Mobile and HH. If you post some alerts, I will listen VHF if you want to work that band, when possible.
Jim

Alerts will probably be on the day, I’ve only got a rough idea of which ones and when atm.

Unfortunately I will have departed my Northumberland QTH by the time that you get up this way, but will try to chase you from the main home QTH. Indeed, the distance may be better. I am sure that you will enjoy most of the summits, especially if you stray north of the border - Hownam Law SS-197 and Rubers Law SS-210 are still amongst my all time favourites. I am sure I need quite a few for Completes both north and south of “the line”. Just hoping my medical appointments don’t clash with your activations.

Thanks Gerald for those suggestions as we shall be doing a few summits in SB (weather permitting!) in the second week of October with the last 4 nights near Coldstream. Any suggestions for the ‘best’ route up The Cheviot? It’s mega years since we were last there. How much success will I have with VHF/UHF on the lower hills? I hope G0EVV will be available then…

Any suggestions for the ‘best’ route up The Cheviot?

Not sure it’s the best up the Cheviot but it seemed pretty straightforward when I went up last year. Here is the GaiaPro link to my track. 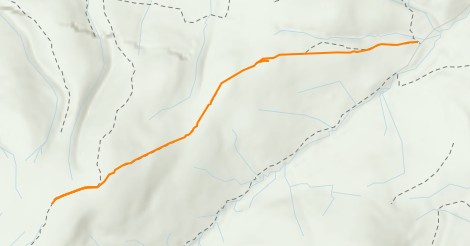 I concur with Paul’s route. We did The Cheviot in early December. Easy parking just before Langleeford. Head up Scald Hill following the obvious track. From the top of Scald Hill you wlll see, depending on visibility, the track to The Cheviot’s summit. We came off in the dark and did not feel uncomfortable even though it snowed on and off.

No idea what VHF will be like but have been told by a few people they will be listening on 2m while we are doing the 1-pointers around The Cheviot the next few days.

Thanks to both W6PNG and G6WRW for the route from Langleeford which looks straightforward (weather and knees permitting). I don’t remember anything about our visit many years ago - except that I nearly sat on an adder but I expect it will have moved by now!

I hope that you are successful with your 1 pointers Carolyn and we will be hoping to visit them also in October. I’ll be interest to see your comments.

Pleased to work you both on 40m today. Hope the bands play nicely for the rest of your trip

I’ll do a write-up when I get time to get my thoughts together about the walks. ATM just enjoying our mini trip

Thank you for the contacts yesterday Helen.

We caught the edge of a squall just as we arrived on the summit and got a little damp. We reluctantly cut short the activation just as the next one came over. We walked down in drizzle and got back to our van as the heavens opened. The next few hours was torrential rain which flooded roads as we travelled up to Kelso.

We were blessed with a beautiful day to come home from GM via SB ten days ago. Simon was up Ros Castle, kids and I stayed down, myself and the eldest giving him two contacts.

Hope to hear you later and it looks a bit more like this. 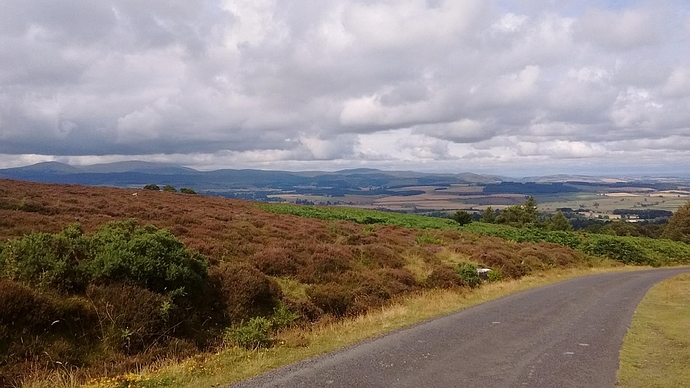 We reluctantly cut short the activation just as the next one came over.

Wot no hail? I have been up Ros Castle twice (one activation and one with family) and have managed to get hailed on both times. I wondered why you didn’t operate all the bands you had alerted for. Then I missed Houseden later on while I was out for a walk. Oh well, hopefully I will manage to make contact when you are on some others.

It’s a nice wee hill, one of those long drive, quick ascent, thoroughly enjoyable SOTA summits. WX was quite pleasant when I was there ISTR.

And it doesn’t hail on the righteous Gerald!

And it doesn’t hail on the righteous Gerald!

Ah, but how do I know you aren’t telling a lie Andy? It might hail ONLY on the righteous. All I can say is that I am glad it wasn’t lightning…but of course we all know that lightning doesn’t strike in the same place twice.

The righteous wouldn’t tell fibs… it would start hailing on them!

It was a nice evening… 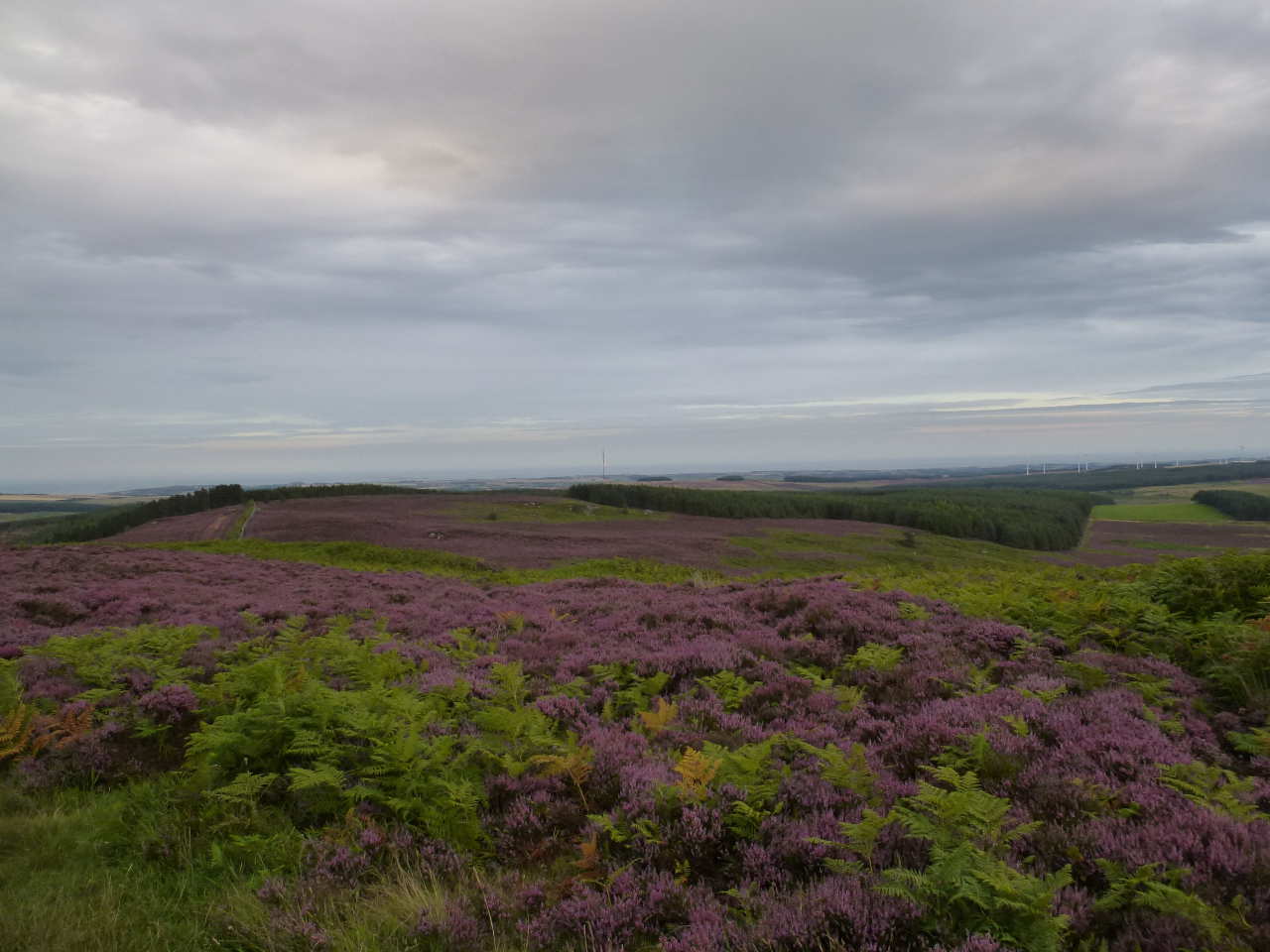 On Ros Castle hill I tried 80m first, the noise floor was quite low. I called and called but only made one contact with EI. 40m came next which provided 18 contacts in 30 minutes, including a S2S, then no replies to calls. Again low noise floor. Finally a try on 60m. Slow going with 6 contacts till my calls had no response. In that time Helen struggled to qualify the summit on 2m.

Ros Castle was a try-out with kit I’ve not used for a few months. I usually do the shake-down before we go away.

We wanted to do a second hill, Housedon, so didn’t set up for 20/17m but they both sounded a bit in the doldrums.

Rain was threatening as we started up Housedon Hill and as we topped out a squall passed nearby and we caught the edge of it as I was setting up. As the propagation was so poor on 80 and 60m I decided to not carry my fan-dipole and only take the vertical which will do 40/20/17m. 40m was working really well and I had 29 contacts in 25 minutes. A mixture of intra-G and Europe.

Another squall was on its way. Helen had made only one contact on 2m so quickly jumped on my kit to qualify the hill on 40m before it properly started to drizzle. We packed up in the wet and retreated to the van just as the rain started. I would’ve stayed longer but I have an aversion to getting soaked for 1 point

After 4 activations 40m is the most productive band, even though it’s a bit hit and miss, with occasional very good signals.