A visit to La Graciosa was on our list of must-dos and not just for the SOTA or geocaches. It is rarely visited by British tourists (mainly being promoted to Germans and Spanish) but has a remote desert island feel and some of the best beaches; at this time of year there are not many people beyond the 600 residents.

There are two summits on the island: Agujas Grandes (EA8/LA-023) and Montana Amarilla (EA8/LA-027). It looked feasible to do both summits in one day if done very quickly and if we could find a suitable route but the tracks shown and most descriptions of visits follow the paths and dirt roads around the higher summit and not to the top. We did look as we passed on the ferry but could not see anything easy from the southeast side so we decided to just concentrate on Montana Amarilla and do this new activation properly. 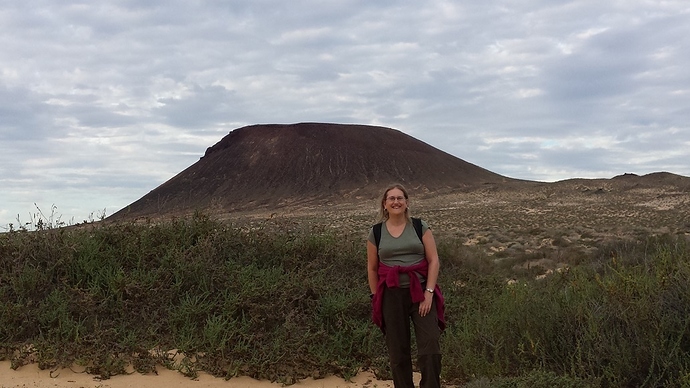 Helen in front of our target for the day, Montana Amarilla (EA8/LA-027); although the smallest hill in Lanzarote it was still over half an hour to the top from here

Apart from some big swells from the Atlantic out of Orzola harbour it was flat calm especially after we turned into the “river”, the strait between the islands. There were 3 geocaches to do on the way along the south coast walking through the dunes and along the beautiful deserted beaches so we took a slightly convoluted route. Finally we got to the path up the caldera which was completely open on the north side. This was loose, fine scree but it was well-defined so not a problem to ascend. 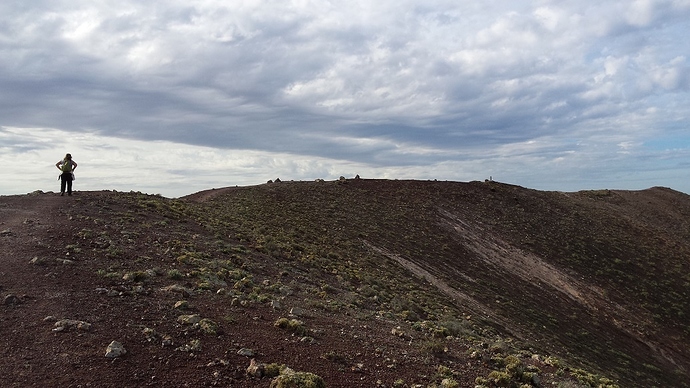 When we first set up the antenna on the ridge the wind was not a major problem; It did get gusty after 20 minutes and kept changing direction so the antenna blew down 5 times! Slowly we moved it down into the caldera to get some shelter but we could only go so far down the slope due to the loose surface. 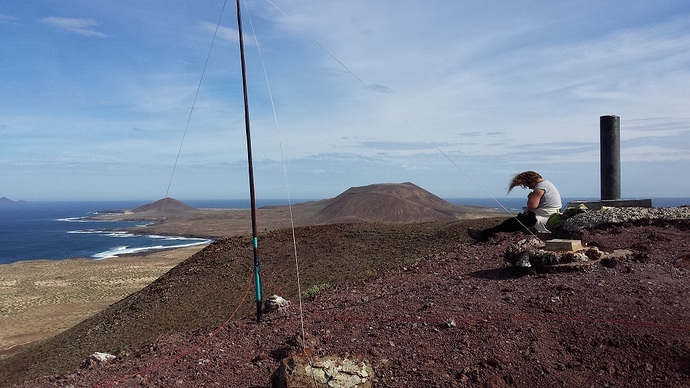 Carolyn activating Montana Amarilla (EA8/LA-027) looking north; this was before it got very windy!

I started on 20 metres and had a good run of callers for an hour and a half ending with 86 contacts. We then had a break for lunch while admiring the views to the Isla del Norte. Another 45 minutes on 17 metres produced 58 contacts before we decided to start the walk back to the main town and harbour, Caleta del Sebo.

It took us an hour and half for a leisurely walk back along the beaches. In total we walked 11 km or 7 miles while on the island but it was a relaxed affair with plenty of exploring and stops to admire the views. 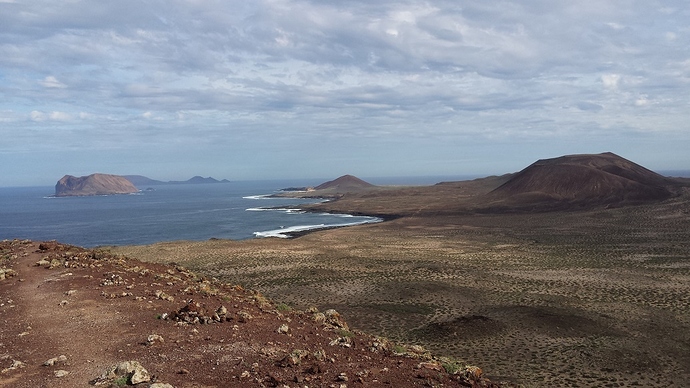 The view north along the western coast of La Graciosa from Montana Amarilla (EA8/LA-027) looking towards the northern islands of Montana Clara (which is just a mountain that is also a SOTA, EA8/LA-024) and Isla de Alegranza (which has two SOTAs, EA8/LA-022 and EA8/LA-025); the other SOTA on La Graciosa, Agujas Grandes (EA8/LA-023), is hidden behind the caldera on the right

If you come to Lanzarote then don’t just take a look at the islands from the Mirador del Rio on the cliffs but take the half hour ferry and visit a real desert island.

Tnx for the report!
Ahoi
Pom

Hi Carolyn,
It’s great to hear that you are enjoying the holiday and not just packing in SOTA summits - I have to agree, that island appears to be a “not to be missed visit” if I can ever get down that way.

Let me apologise for the bad behaviour of some of the chasers yesterday, I mean, even if English is not your first language, after hearing, “Please only non-European stations” for the third time, the station must realise he’s doing something wrong!

I wonder if moving down the caldera a little actually helped your signal into Central Europe? Initially you were very weak with me (but getting good reports back from the UK) but towards the end of the activation you were much clearer. Perhaps it was just conditions changing?

Once again, thanks to Helen and yourself for putting this new summit on the air for the first time and for all the other activations that you have done while on holiday.

Hi,
Thanks for all the summits. Your hair was horizontal in the picture “before it got windy” - what

Thanks also for updating your alert before deletion today - I wish more activators would do that.
Anyway you must have both had a great holiday. I recall you both come back tomorrow so you may find the 20C difference in temp.’ a bit of a shock. I hope you have some jumpers to put on before you emerge from the plane!
Best wishes
Mike

Look out for loads if pictures on my flickr site when I get home to my fast 'net connection.

Helen commented that it was like an Elvis quiff, Ah-ha

Sorry if we missed you this year if you came over to the UK,

We have done lots of the touristy things (Helen has not been to Lanzarote before) and climbed lots of calderas and walked some coastal paths (something I have not done on previous visits) so it has been a great, if tiring, holiday.

It was probably conditions changing; the propagation has been moving all over the place which is why I occasional call CQ DX to see if there is anything unusual being swamped by the strong European stations. Annoyingly I always go back to a general CQ, so if the European stations calling stopped for a moment they would get their chance sooner.

Yes it was before it got really windy but it was fairly constant at that point. Later it had stronger gusts and changed direction continuously (a precursor to today as the wind has changed direction by at least 90 degrees and the aeroplanes are taking off in the other direction) and that was what made the antenna collapse so many times.

No we have one more complete day so if it is not too windy tomorrow expect at least one activation.

Today we got to within 300 metres of the summit but it was already obvious it was going to be far too windy to safely deploy the antenna; we were being sand blasted and almost blown off. We were not sure there would be any shelter on the summit as the wind has changed direction so the lea side was steep.

Later in the afternoon we decided to head north via the Timanfaya visitor centre in case the wind there was a bit weaker. We planned to climb Montana Taniche which had a geocache two thirds of the way to the top. Initially it looked good but once we got onto the rim the wind was stronger than earlier. We persevered to the cache but as we were on our hands and knees to stay on terrafirma a retreat was in order. Sorry to all those expecting some radio action

or are you a Leningrad Cowboy?
Don’t worry, we haven’t been to G(M) this year. I activated some SM summits on a men’s holiday while Ilse was roaming in 5H. You won’t miss us at the Mega Wales next August.

With think it is going to be a very good mega, the organisers have plenty of side events planned. we have already booked the camping

Make sure you bring your radios loads of hills to play on!

We’ll be equipped to hunt any station and cache. Though I probably have to fit my linked dipole for 60m and make some guys for my new multiband vertical. Here, I usually just velcro the pole to a fence, tree, picnic table or rubbish bin, but these are all items you can’t find on most british summits…
Looking forward to seeing you girls again!

Hi Carolyn,
Well you had less wind on 007 today but it still sounded pretty fierce here. Pity about James FR4PV losing you in QSB yesterday, it would have been a good one and it was good of you to listen out for him later. From here Reunion Island is about 6,000 miles (SP). He was about 51 here with QSB.

I think you were both wise to retreat. I wonder is the wind just strong at this time of year or is it all the time in EA8?

It’s always breezy to windy Mike just sometimes it’s very windy. There was a stiff breeze everyday when I was there.