It's taken a while.....an activator at last

So, 50+ years since becoming an SWL; 30 years since climbing my first Munro; 20 years since SOTA was created; 2 years since gaining my Foundation licence and 2 months since properly starting to chase SOTA activators, I have finally managed to complete my first summit activation. About time, too!
A nice wee local hill to start with; Craiglich GM/ES-068. A beautiful but freezing morning saw me setting off from the home QTH at 6am in the company of XYL, Ann, and YK9L, Sula. We were on the hill by 7am after parking at the ample Queen’s View layby. It’s becoming busier now that there is a wee coffee cabin nearby but thankfully there were no cows (or bulls) in the first field before the path proper starts. 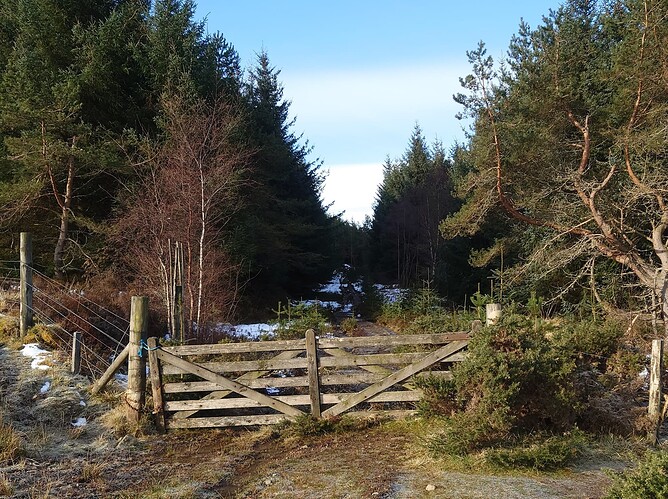 Craig11920×1437 609 KB
Craiglich is a gentle uphill walk on good paths, initially through forest then across heather moor. It might not be high (476m) but the rewarding views across Aberdeenshire from the summit are excellent. Enjoyed wonderful vistas looking south-west to Lochnagar and west to Morven with the Cairngorms beyond. 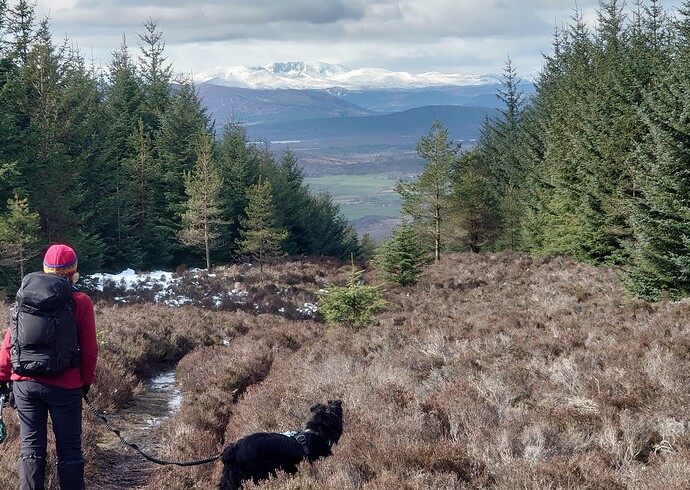 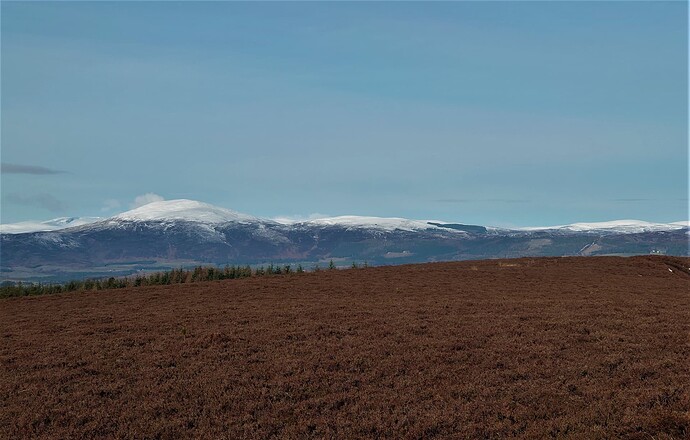 craig41920×1227 208 KB
There’s plenty of space around Craiglich’s summit cairn for a SOTA setup. My choice was my Elecraft KX2 working 10w with a W3EDP inverted-vee antenna on a Sotabeams 7m telescopic mast. It’s a lightweight and compact but versatile rig that fits neatly in my rucksack with all my other usual hillwalking stuff.
There were plenty of lessons to be learned, though. Firstly, better not to attempt a first activation on a busy Sunday when contests rule the HF wavebands. Finding a free frequency was a challenge on 20m but I settled on 14.290 and after a couple of CQ calls, SP9JKL (Jerzy) was first into the log at 8.26. That was followed a minute later by OM1AX (Vlado), then the bonus of a summit-to-summit with IN3ADF/P (Markus) on the six-pointer I/TN-162 Monte Cingla. Three down and one to go which was soon provided by SV3SFJ (Nasos). A first activation was achieved!
Next, a QSY to 7MHz yielded no clear channels so was abandoned, then a placing a speculative spot on 21.231 came up blank after a number of CQs. Back then to 20m and when looking for a free frequency I heard EC2AG/P (Antonio) and completed a S2S with him on EA2/BI-030, the single-pointer Garbea.
A new spot on 14.319 brought the much appreciated response from one of my SOTA inspirations, Fraser, MMOEFI, from his home QTH which I could probably shout to from the summit - well, not quite but it’s less than 10K away. I was delighted with that. Next was another S2S, this time with CT2GSN/P (Joao) on the single pointer CT/MN-035 Monte Sameiro, followed immediately afterwards by EA2EVM (Cesar).
It was then another lesson was learned. When a second EA2 called in with an excellent signal, I forgot myself and in the excitement failed to record his full callsign in my notebook despite exchanging signal reports. I was very frustrated with that. Note to self: do not get too excited or distracted when operating but continue to log methodically and comprehensively - and with good handwriting when using a paper notebook!
No matter, the Craiglich activation rounded off with OH3GZ (Jack) and then IU1KGS (Carlo).
I did have my wee Yaesu FT-4XE handheld with me with a Diamond whip antenna in case of any S2S opportunities but I didn’t use it as I must admit I was still annoyed at missing the EA2 callsign.
To avoid making other mistakes due to brain fog, I decided to call it a day. In 45 exciting minutes, I logged 8 countries and 10 QSOs with 3 S2S and was back at my home QTH by midday. All in all, that was more than satisfactory for first attempt, though.
After such a long wait, it has been a thrill to activate my first summit, which I hope will be the first of many. For now, sincere thanks to chasers, activators and SOTA administrators for making a trip to the hills an even more memorable experience. I’m already polishing my boots and charging the radio batteries for the next one…! 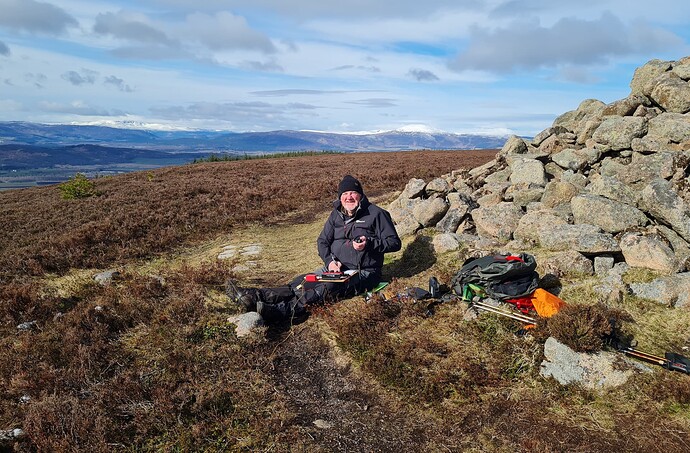 Well done on your first activation. It looks like you chose a good day for it.

Thanks Richard. Dry, sunny, gentle breeze, snow on distant hills but not underfoot, no one on summit. Aren’t they all like that…!

Well done Mike! Delighted to chase you for a change.

I only realised the hill was being activated because I broke my APRS digipeater last night and had to spend a couple hours reloading the raspberry pi OS, Direwolf software etc. I’d just fired it up and went to check aprs.fi to see if it was visible. That’s when I saw the SOTA icon very close to home on the map!

Craiglich is a great wee hill. It’s been described as “The Queens View on Steroids”. I’ll be up there again soon and I’ll give you the nod so you can get your Complete.

Thanks so much Fraser. Lucky for me that the digipeater threw a wobbly or I might not have been seen by you. Really appreciated the call though. It was a good day for my first one and as you say a fine wee hill to get me going. Hope you’re doing ok now. Thanks for all the support. 73. Mike

Excellent stuff Mike! Great to have another local hitting the hills.

Thanks Simon. Very much appreciated.

It was then another lesson was learned. When a second EA2 called in with an excellent signal, I forgot myself and in the excitement failed to record his full callsign in my notebook despite exchanging signal reports. I was very frustrated with that. Note to self: do not get too excited or distracted when operating but continue to log methodically and comprehensively - and with good handwriting when using a paper notebook!

This is why i use “crib sheets” with boxes to fill in the required info needed to log the calls… i can send you the sheets i use (home made by the way) if you wish to use them! i also have a similar version for chasing!

Hi Alan. Thanks for the advice. It’s a good idea to prepare in that way. I did have a small pre-prepared log sheet with me, in addition to my trusty waterproof notebook, but I’m afraid the setup had thrombosis - ie a clot behind the pen…!

Thanks again for the comments. Good luck with forthcoming activations. 73. Mike

Hi Alan. Thanks for the advice. It’s a good idea to prepare in that way.

yea, very much so… this is what i use! 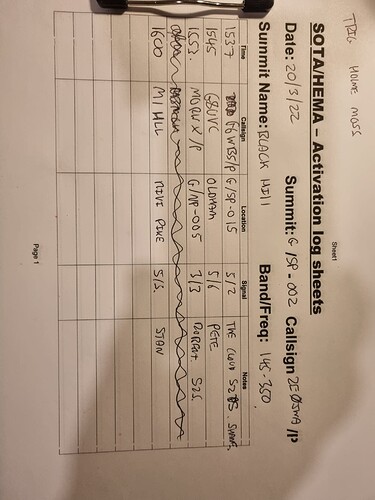 Just on a clip board, slides in the back of the rucksack easily and you can have the top pre-filled before you go, so when calling you have the summit name and code to hand immediately…

Many congratulations on your first activation. Looks like you had a lovely day for it - I loved the photos. Glad to hear that you’re already thinking of the next one. A sure sign that you’re heading for SOTA addiction! Look forward to getting a S2S in the log with you one day soon.

Thanks Matthew. The bug has definitely bitten although years in the Scottish hills in my pre-SOTA days leave me in no doubt that not every day will be as nice as this one!
Hope to work you S2S soon, too. Good luck with you own Activations. 73. Mike

Well done on the activation. It looks like a good summit to start your SOTA activating career on. If something had gone awry, then it would not have been too much of an issue, but thankfully it worked out well.

When a second EA2 called in with an excellent signal, I forgot myself and in the excitement failed to record his full callsign

I think this may provide an answer… first your log

This is a useful tool, but of course not everyone that you work will actually put a chaser log into the database.

Hopefully catch you on a summit when you can find a clear spot on 40m.

Hi Gerald. Thank you so very much for this excellent update. I hadn’t been aware of this system but I am now! Big relief to know that I can now give credit to my missing contact and get him in the log.
Yes, it was a perfect day for a first outing and now really looking forward to doing much more.
Hope all good with you. Thanks again. Happy activating. 73 Mike

I also hadn’t previously noticed that it seems I made another schoolboy error yesterday by entering my log times in local rather than UTC - something I have never previously done. Apologies to all. Must keep taking my medication……

Thanks Andy. Will do. I’ll get the hang of this yet, hopefully before you all curl up in despair……

…entering my log times in local rather than UTC

It’s that time of year Mike when you have to make a concious effort to remind yourself. By the way, I did have a laugh to myself as some chasers seem to need new batteries in their timepieces.

Dammit. I failed. It took me 12 minutes!

make a concious effort to remind yourself

Works both ways… On Walton Hill (G/CE-002) on Saturday a jogger stopped to ask me the time. He had to ask “are you sure?” three times before the penny dropped…