Until now I have using my son’s 42 liter Rhino trekking backpack. I never found it a very handy backpack, with all the dangling straps, difficult access and too few compartments. 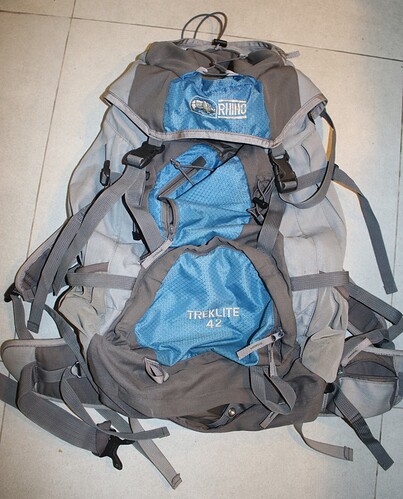 It resulted in the loss of my HT on my second activation (and that still hurts, I can tell you) so I started searching for a handier solution. Many hours of googling later it resulted in this… 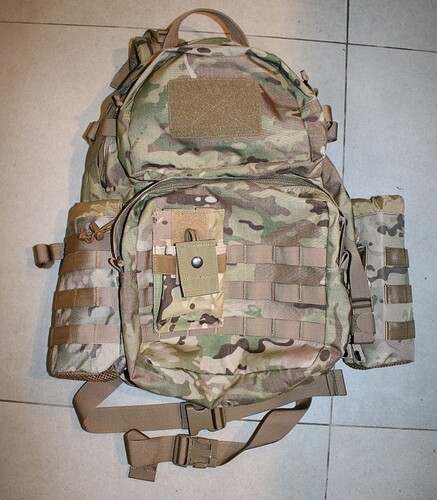 As with many things in Taiwan: there is choice, but limited. I could have gone for a cheap Chinese pack (nah, you’ll regret it), a Taiwanese branded one (expensive!), or order one from abroad and wait an eternity (…). So when I found a store close by that sells Helikon-Tex and at a good price I decided to go for it. Online reviews of Helikon-Tex are usually positive, with quality almost always scoring high. The only thing that held me back was the volume: only 25 liters.

So I went to the store with all my gear in the Rhino backpack and they gave me a Helikon-Tex Ratel Mk2 to try it out. 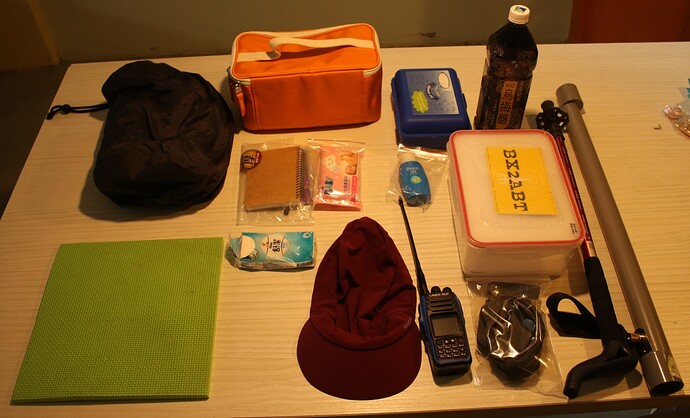 I had room left in the Rhino when I was packed up, but amazingly I also had plenty of room left in the Helikon-Tex Ratel. So much so that I decided to buy one on the spot. The two boxes with radio gear fit in snug and so does the orange cooking kit. In the lower front pockets there are spare clothes and rain gear with room to spare, and in the upper one essentials that you need to grab in an instant: mosquito repellent, sunscreen, spare battery, etc. Exactly the way I want it. 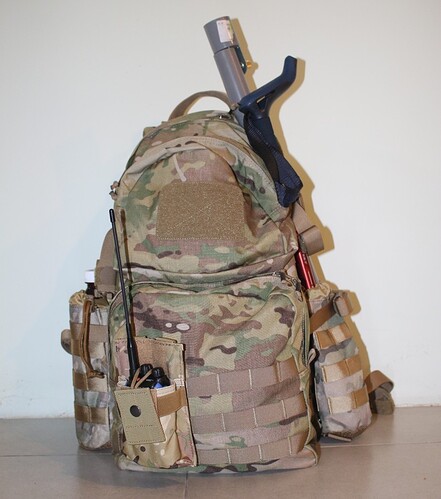 But as I said, in Taiwan you have choice, but only limited: I could either choose between a very foul brown looking one or the camouflage version. The latter one was US$10 more expensive, but one sigh later it became mine. 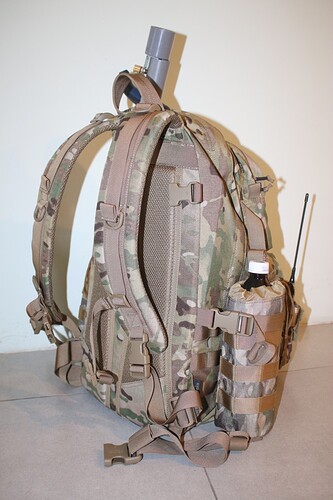 Tactical backpacks usually don’t come with side pockets, but since the Helikon-Tex Ratel Mk2 has MOLLE webbing I bought two additional water bottle pouches and a pouch for my HT. One water bottle pouch acts as a pocket to strap the antenna and walking stick to the pack, the other is for an actual bottle. I really wanted to buy a shoulder strap pocket for the HT, but they didn’t have one that could clamp around the strap, so I went for a regular MOLLE one. Not ideal, but at least the HT has a fixed place and hopefully won’t get lost again. 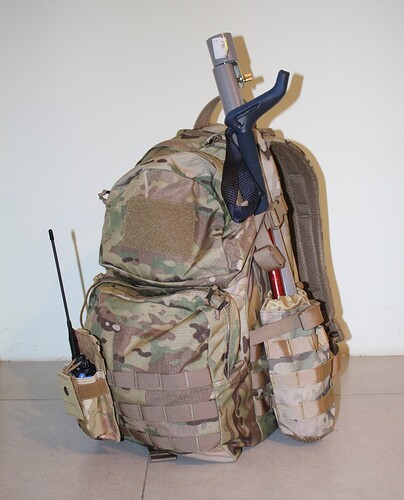 One hundred and two US dollars lighter I walked out the store, but happy that I found the pack I like. And since the weather is looking good enough this Sunday, I can try it out for the first time and I’m really looking forward to it. Stay tuned.

Hans, fine review. How’s the weight of the Helikon? Some of the “tacticool” stuff out there tends to be heavier than I’d want to carry for miles.

Thanks! Yes, you’re right, the tactical ops stuff is heavier. I weighed both my old and new packs and the Rhino came in at 1.5 kg, while the Helicon-Tex was 1.9 kg with the extra pouches included. That is an extra 400 grams, but I’m not a weight freak, yet. If I was I would have swapped out my KX3 for a KX2

For the day hikes I make right now I can take the extra weight, also because I need the exercise.

Do you consider an extra 400 grams acceptable?

If 400g is acceptable to you, then it’s perfect. The extra protection your gear will have via the material thickness will pay dividends, including water resistance. Ultralight is not always ultra-best when it comes to harsh climates.

Plus I dig anything multicam.

Do you consider an extra 400 grams acceptable?

Only in that I took a knife to it and cut out, shortened or removed various bits. It’s supposed to be a ski bag so I ditched the ski straps etc. It also had this entirely redundant integrated dry bag thing going on inside. It was a pre-release prototype so didn’t have any concerns hacking it up. It’s fantastic for fast and light days. 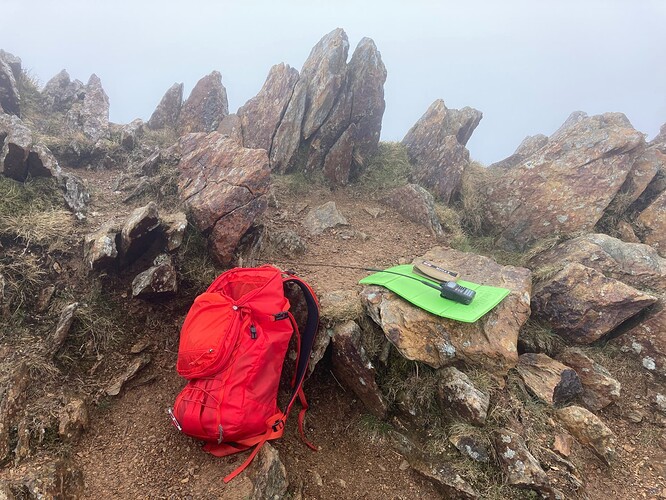 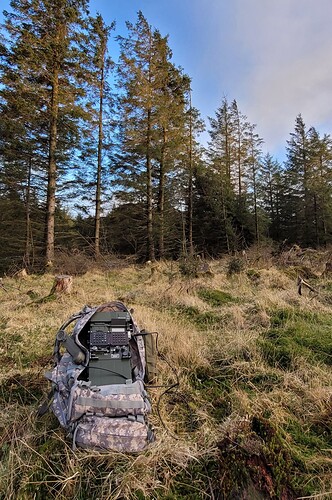 I like it! However, I’m reminded that five rucksacks is enough already!

That radio looks a beast!

For light weight, small to medium sized, search for ultra-runners’ packs such as those from Ultimate Direction in the US. My typical out-and-back day SOTA activation pack weighs only 140 grams. 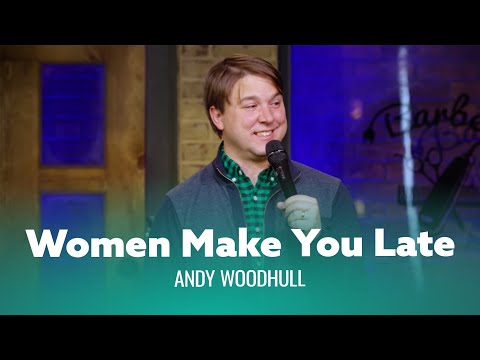 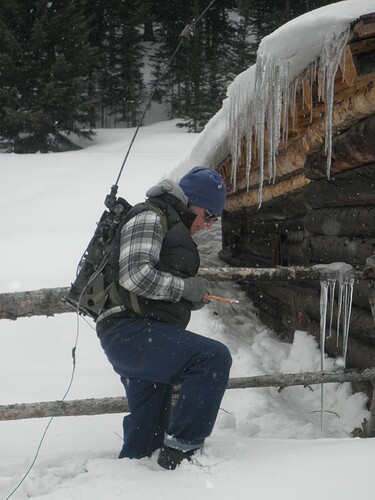 I like comfort and robustness in my pack. I use a Kifaru lightweight (relatively speaking) frame and a Stryker XL. It’s good enough for a day but can easily be added to in order to over great volume with the comfort of the frame. Expensive but I consider it worth it.