It’s IARU R1 UHF and up contest day but my contest group are not out so I thought I’d do a hill with 23/13cms. I looked at the map and thought, hmmm Ben Ledi, not been there for a while. It has a good take off into Glasgow and Edinburgh but a bit pishy for Aberdeen way where Jim GM3UAG is based. Next time, an east coast hill so I can work Jim.

The car park was just about full by 9.30am. A lovely old lady drove up and rather than parking so another few cars could squeeze in, just abandonned her car in the drive. Classy!

There is a good path to the summit and it was heaving. Also the start was through mature woods which have now been havested and that spoils the effecct of bursting out onto the open countryside. Still a Cuckoo was signing his heart out. It was warm and sunny but the tops were in the cloud. I had forgotten that Ben Ledi is a bit of a steep sod. 720m of ascent in 3.8kms means my legs were not happy going up and less happy coming down…

How steep? This photo gives a view of what the ascent is like for the whole time. The actual summit is about 30m beyond the snow patches at the top. 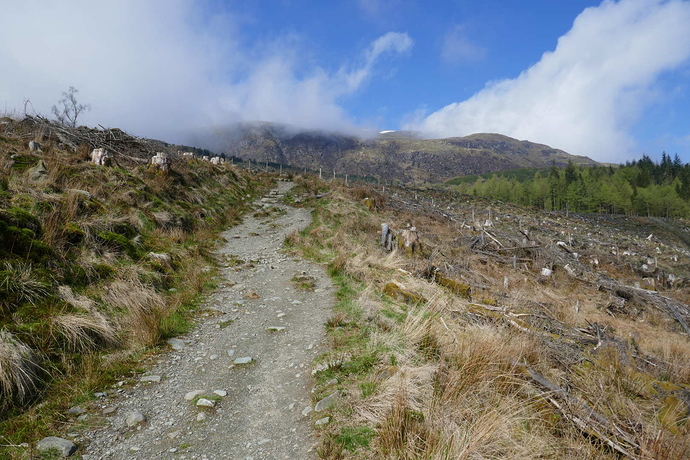 I don’t remember the path being so well made and it goes 7/8th of the way. Not surprising, probably over 200 people summited today.

So I ground my way up and at the top the cloud lifted for a few minutes but the wind howled and soon it was miserable. Warm but miserable and very grey. 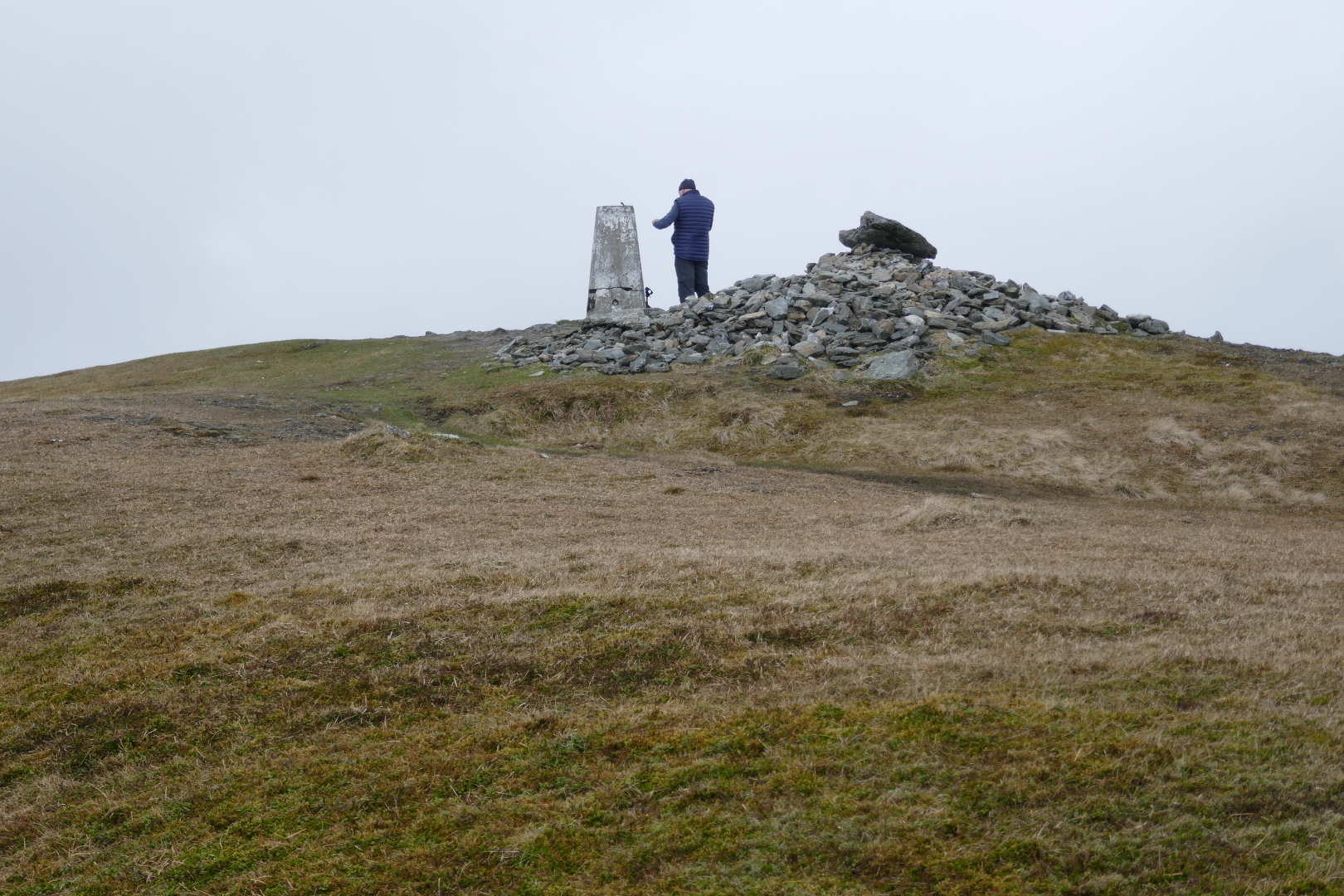 I set up the 13cms, 23cms handy, LF dipoles and listened on our talkback frequency. There was Gavin GM0GAV on Kings Seat SS-235. Bingo, S2S to start the day and oh, a complete as well. Nice! Gavin gets a bit light headed on such high frequencies as 144MHz being a real HF man! Next was Robin GM7PKT on Drummond Hill CS-114. Another easy S2S and another complete. I think Robin spent 4hrs on there once and didn’t qualify it, well there were 2 QSOs.

Next was Robert GM4GUF asking if I was QRV on 13cms as he was running late. I told him it took me 2hours to get up so I wasn’t going soon!. Then Brian GM4DIJ called in. He moaned I was only 41 on 2m. But on 2320.200MHz I was 59++. So we chatted there for a while till Jack GM4COX/P appeared. Jack was on Spartleton SS-182. So that was another S2S on 13cms which was nice. And it was another complete! Completes done on microwaves are better, they just are

Robert appeared and we QSY’d leaving Brian and Jack to work each other. Robert was so loud on 13cms from near Biggar that I am sure he was overloading the transverter RF stage. To get in the spirit on things, I climbed an 896m hill and Robert climbed a 5m scaffold tower by his mast as he was re-rigging the 13cms antennas.

Now, I have 3 13cms QSOs and there is a contest on, maybe get a 4th which would be cool. Brian told me G3YJR was beaming North and calling but there was nothing. Shame, would have been a new DXCC on 13cms. Bang Danny GM6CMQ in Dunfermline appeared and that was #4 and qualification on 13cms. Does that taste good? Oh yes. Then Jim MM0GLM appeared on SS-104, Meall nan Coarach near Amulree and that was 5 QSOs on 13cms. This was too much and I had a Double Decker chocolate bar. Oh that was another S2S and complete, I’ve waited 11.5 years to chase SS-104.

Finally a CQ call on 23cms FM produced John GM7OIN down in Ayr who was astounded how loud I was, 59+40 when I turned the PCB horizontal. I finished off with a quick run of 5 stations on 40m CW. Here’s the setup for LF and 13cms. 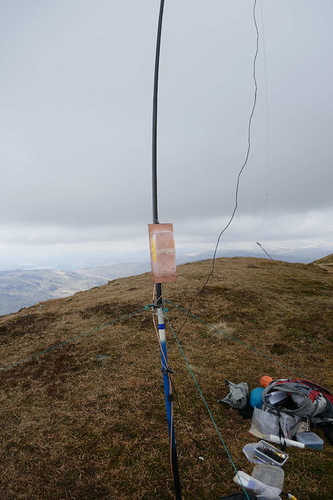 The WX was quite grotty now and the mist came down. Time to go. The walk out was painful on my front thighs but it didn’t need much descent before the views came back. Like this. Loch Lubnaig with Beinn Each SS-034, Stuc a’Chroin SS-010 and Ben Vorlich SS-008. 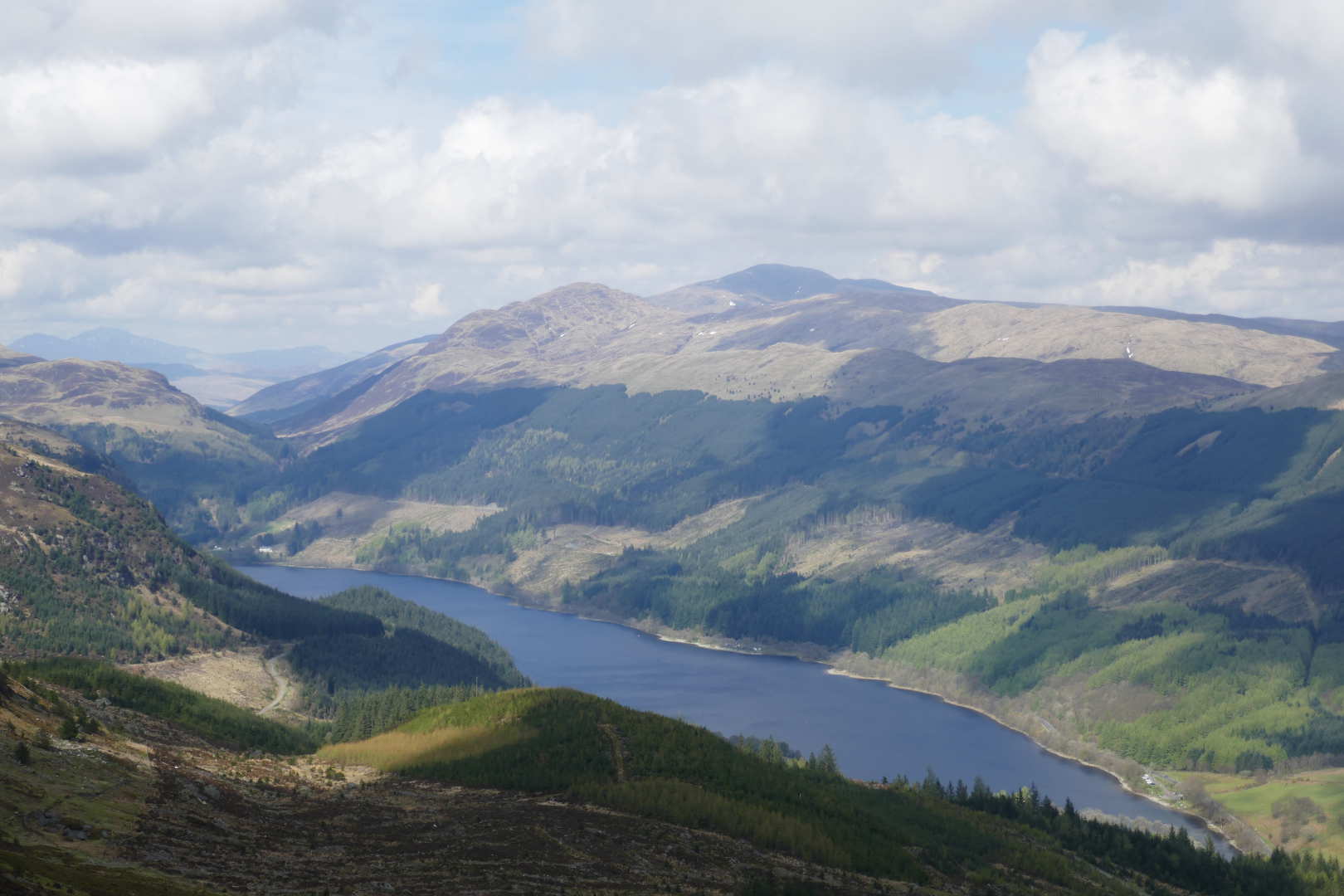 The question is this. It surely cannot be legal to have just so much fun on one hill? It was hard work at one time with several QSOs all on 13cms on the same frequency. For the first time since we started using it up here we actually had to split up and pick our own frequencies. I need to get up into the Cairngorms so that I can get Barry GM4TOE and Jim GM3UAG into the QSOs. The Cairngorms can be seen from some of the better sited stations in Edinburgh so it does make them tempting to try.

Thanks to all who were out and all who played from their shacks.

Great report.
Pishy - you might want to explain that. Folk may think it is a technical term.

I was hoping you would show up on 60m (I want that summit!) but I don’t grudge you your fun, well done!

Lovely pictures Andy… Sorry to outdo you - we are awaiting our 4th Cuckoo in Czech Republic. Thank you for a FB report for SS-023 (I would like to go there with blue sky also) and see you at Friedrichshafen!

Knowing you and Victor, you’ll be having obscene amounts of fun. If the Czech authorities find out, they’ll deport you!

They gave us 5 year licences - thanks go to Eva HB9FPM for assisting in the process of getting them from the Czech Telecomms authority! Unthinkable before Glasnost…

PS Visited “Sportsbar” tonight for last beer, lack of “talent” hihi so early night playing on reflector. Breakfast at 7.00am tomorrow for another “SOTA Ultra” day in the OK sunshine.

Sorry I didn’t get the contact but we were running about an hour early which meant you would be near the start of the path when we were passing. Being with a dozen mad old bikers waiting was out of the question.

Great wx for hiking, a bit warm though. It showed with all the cars abandoned everywhere.

224km beats my best so far. We’re still having fun working LOS or near LOS paths. There are some really good S2S long paths still to work. The Cheviot to Lochnagar is LOS an 180kms and Snowdon to Merrick is 232km and also LOS. I just need someone to go to The Cheviot or Snowdon so I can pick up the QSO and new DXCCs

Well done on all the 3cms QSOs. I’ve been pushing on with finishing my system which has been far too long in coming together. A major setback was the LO failing. I’ve punted for one of the AD synthed generators for the 2556MHz LO. I’m going to swallow my pride and download an Arduino image to program it up rather than waste time reinventing a wheel which is already round. And free!