When planning my SOTA activations for my holiday in EA8, I listed the recently added summits that were already activated a few times, and noted

Looking more carefully for the routing from the hotel, I realised that EA8/GC-002 is a huge rock about 67 m. tall, and that I am not at all capable of climbing it up to the activation zone, 25 m. from the summit.

I decided to drive to EA8/GC-008 instead, and followed the narrow path to its “summit”. The weather had turned poor with light mist, wind and some rain when I reached the place. I realised the path would not bring me to the summit of the rock, but was not sure it was more than 25 m. higher than where I was.

Quite upset after the long drive and hike in this weather, I “activated” the summit.

Back to my hotel, I tried to find more information about the actual elevation, and I am now convinced I was not within 25 meters from the summit, and not in the Activation Zone. I did therefore NOT upload the activation to the SOTA database.

Sorry for the trouble.

You have picked the two most difficult SOTA summits on EA8/GC! For both of them you will need serious climbing skills and climbing equipment.

There is another inaccessible summit on Gran Canary Island, EA8/GC-027, Montaña del Faro, which is within a Military Area. It would be an easy walk from Las Palmas but I could not gain access legaly.

For most of the EA8 summits I have visited you will find tracks and descriptions on the SOTA Mapping pages. Could be of help for future planning!

Have a nice remaining vacation!

Dr Christophe and Heinz,
I fully aggree with your comments about Roque Nublo.
I have mentioned that earlier a few times in SOTA News.
Roque Ventaiga (Roque Bentayga) is from the foot of the monolith around 15 m high. Hence climbing to that place without real mountaineering and you are well within the AZ. I have activated this summit twice. Furthermore as also mentioned a few times in SOTA News, a carefull study of the weather forecast is a need. On the beaches well over 20 C and meanwhile a blizzard on Pico de Las Nieves made me careful.
73 de geert ea8/pa7zee

I have read of an organized walking tour to the military area of Montaña del Faro, so perhaps it might be possible some day if you are lucky to be there at the right time.

For the big pillar summits it would be very nice if those who managed to activate them could add some tips to the summits pages please. I remember noting what a challenge Roque Nublo, especially, would be, so I was surprised to learn that anybody had been able to do it.

I think it would also be great if people left notes on the Tenerife summit pages that people have activated as these would be very helpful, especially for El Sombrero EA8/TF-004 as that was recently activated, but has a big rock on top to which I am not sure if it is more than 25m above the hill itself.

Hence climbing to that place without real mountaineering and you are well within the AZ.

I based my conclusion on the GPS tracks below, that show the top of the ascent well below
1415 - 25 meters.

Roque Nublo is definately rock climbers territory. The easiest route that I could find on line was a sport climb (pre-placed bolt protection) which was UIAA grade V, corresponding roughly to a traditional UK adjectival grade of VS (Very Severe) and various sources give the height of the pillar as 63m, 65m and 80m. The debris around the base suggests that the rock is not very firm and there are comments that the rock is loose. Anybody who does a valid activation of this summit needs to be at least a competent rock climber.

There are rock climbs on the north side of Roque Ventaiga but I can find no details. Climbing and scrambling on the other sides is forbidden to preserve archaeological sites, including caves with pubic carvings.

including caves with pubic carvings.

This is why you need to get yourselves the SOTA flag! Attach to top of (measured) pole for good visibility. Get helper to take telephoto picture from a good distance. Return to base and measure rock against calibrated pole.

Surely we’d have to wait for a Brazilian association to see those?

Thanks for pointing that out Jimmy.

We’d prefer that AMs should give guidance on this sort of matter, rather than the MT having to step in in a policing role. However, it’s so clear in the case of Roque Nublo, EA8/GC-002, that we really can’t let this pass. This is a summit that really obviously needs rope skills to enter the AZ.

It really should be obvious enough from the map, or indeed from standing at the base of the rock, judging from the pictures, that the AZ is way up high.

Here’s the Spanish IGN map. The 1750-m contour (64m below the summit) is quite obvious: 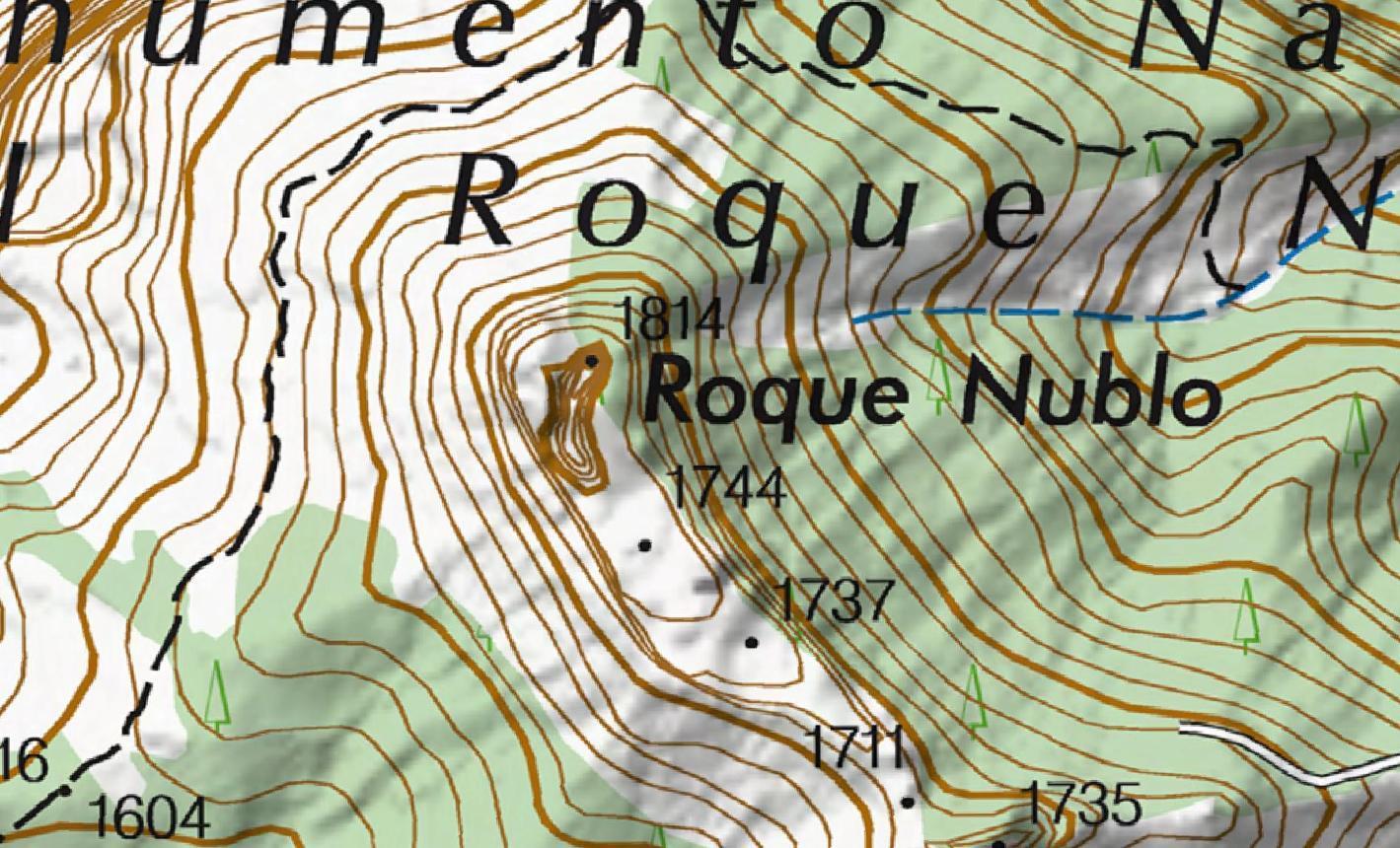 To make it really clear I’ve gone to the raw point cloud from the Spanish LIDAR survey. This has a ridiculously high resolution (better than a metre). Here’s a contour plot with a 5-m interval: 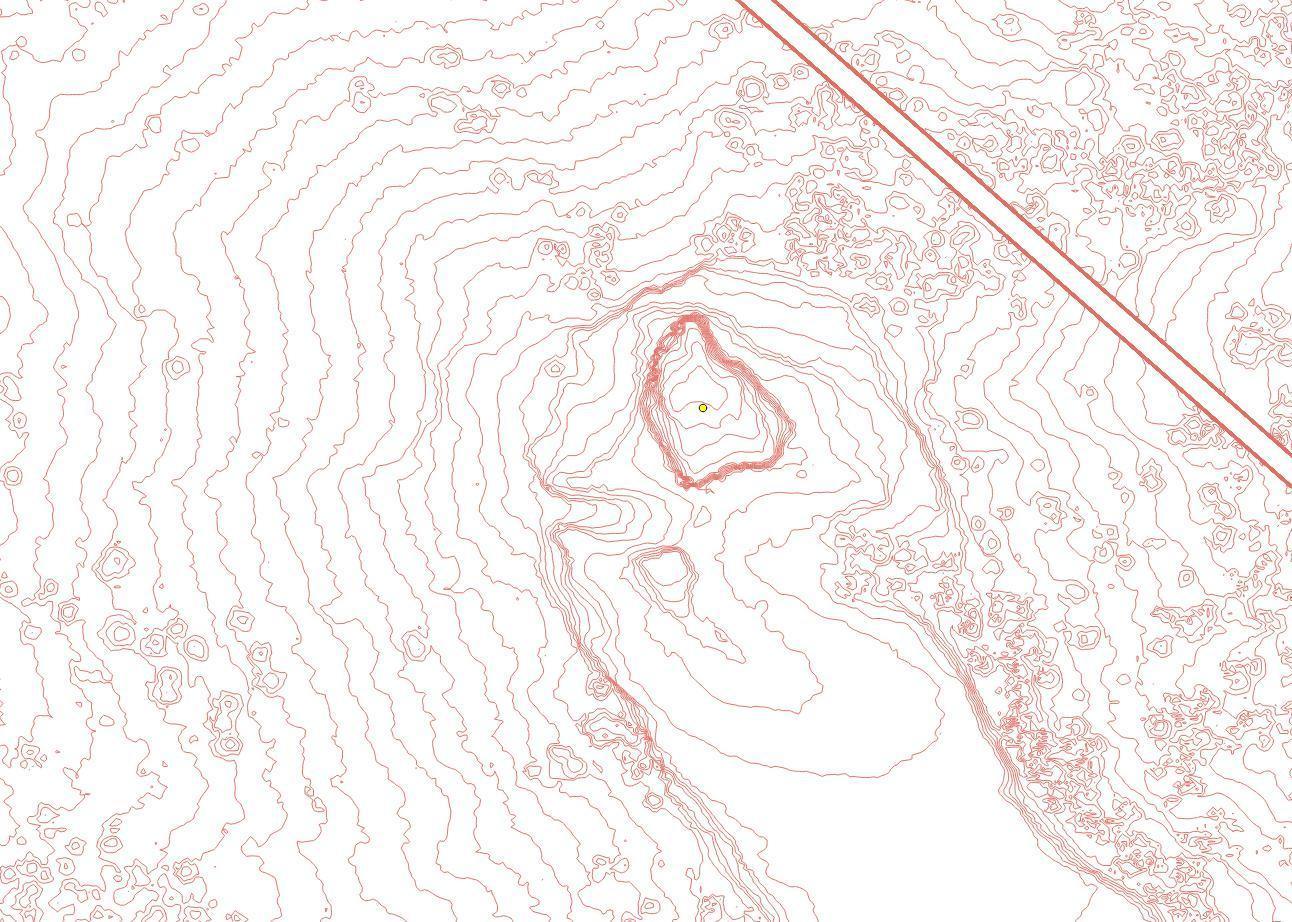 The ground level rises very quickly from the low 1750s up to the top. So the delta Z is approximately 60m. Activations from the foot of the rock are out of bounds by > 2x.
The last contour before it goes clearly vertical is 1750m.

It’s even clearer if you make a perspective view. Here’s the model draped with satellite imagery. The Activation zone is shaded purple-to-green: 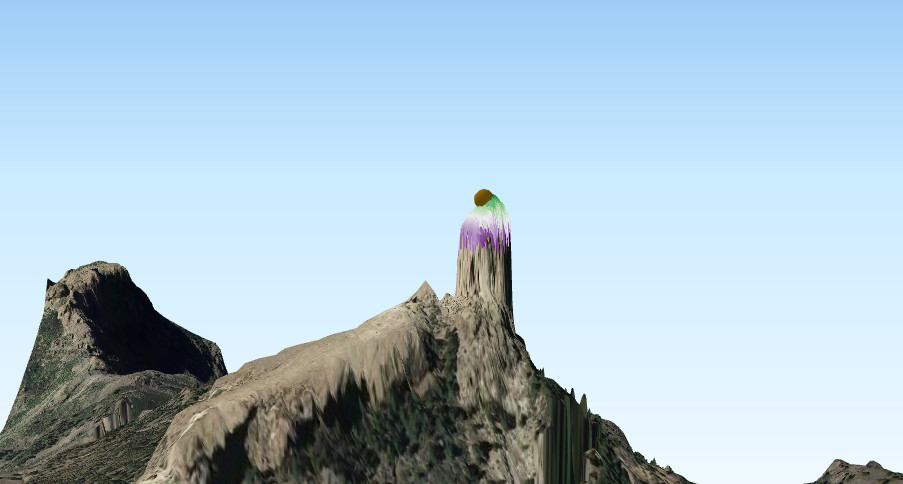 So, no ropes = no activation! We’re going to have to contact any and all activators on that one to produce evidence they made the climb. Sorry, but this deserves proper credit to whoever does this one for real.

Further useful information (and pretty pictures) for climbers of Roque Nublo may be found here:

Roque Nublo is definately rock climbers territory. The easiest route that I could find on line was a sport climb (pre-placed bolt protection) which was UIAA grade V, corresponding roughly to a traditional UK adjectival grade of VS (Very Severe) and various sources give the height of the pillar as 63m, 65m and 80m. The debris around the base suggests that the rock is not very firm and there are comments that the rock is loose. Anybody who does a valid activation of this summit needs to be at least a competent rock climber. 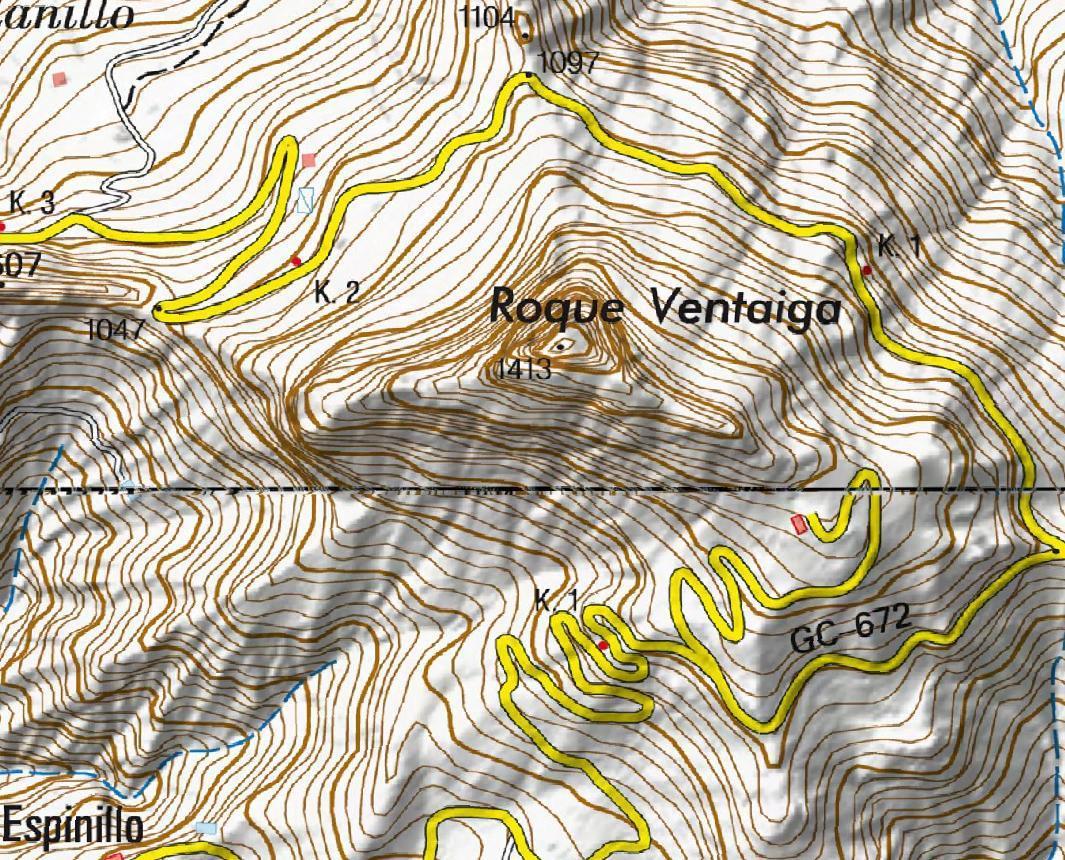 So, with the summit at 1415m the AZ extends down to 1390m. You can spot the 1390-m contour not far down from the top, above some very tightly-packed contours. Let’s look at a 3-d model produced from the sub-metre resolution LIDAR points cloud, zooming in on the AZ: 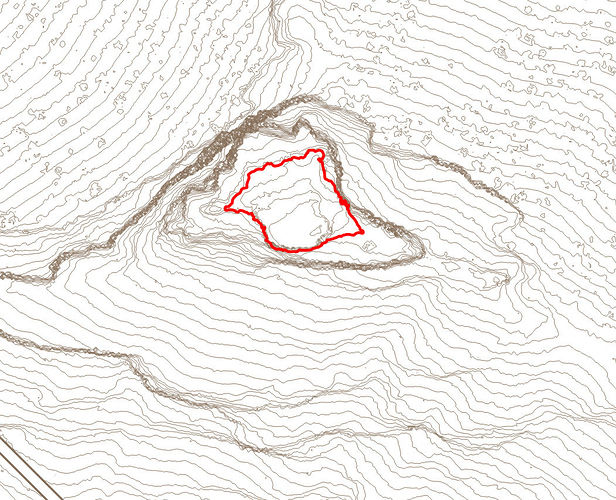 Here the 1390-m contour is highlighted in red. Once again we can see a bit better with a perspective view: 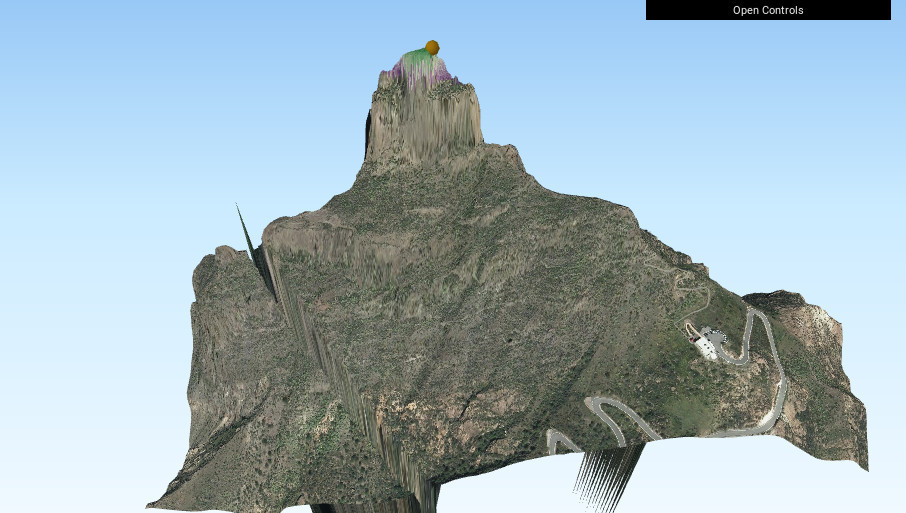 The shaded AZ extends to just above a shoulder on the rock. You can see this feature on the Google Earth view also, although a bit less well defined. Below the shoulder again the contours are very closely-spaced and the rock is near to vertical. Below that the ground on the approach to the rock reaches 1339m, 76m below the summit, so well outside the AZ.

However, from the approach I think the shoulder just below 1390m is what you will see (i.e. about 51m above). Perhaps this partly explains an underestimation of the height of the summit above the activator?

Further information may be found here:

From there I note the following that would apply to climbing into the AZ:

On Roque Bentayga, due to its historical and archaeological significance, some additional restrictions apply. Together with the neighbouring rocks it has been protected as archaeological park Roque Bentayga y Cuevas del Rey. Hiking to the platform to the east of the rock is allowed while exploring the caves in the south face generally isn’t. The bolted climbing routes on the north face are free to be climbed but additional routes may not developed

As the “platform to the east of the rock” will be well outside of the AZ it seems the only way into the AZ is to climb by the established bolted route on the north face.

Other sources suggest that even the established bolt routes are at risk of being banned because of the archaeological importance of the site but AFAIK the above is still the status quo. To be explicit you may not explore the caves or climb on the rock except for the established bolt routes - which do NOT appear to be a piece of cake! Besides anything else the rock is basalt, and as you will easily find from the Quiraing and Storr cliffs on Skye, sound-looking holds are liable to come away in your hand if you put any weight on them! Thus even if the platform (more like a glacis) on the edge of the AZ can be reached by a scramble, doing so is forbidden.

There are rock climbs on the north side of Roque Ventaiga but I can find no details. Climbing and scrambling on the other sides is forbidden to preserve archaeological sites, including caves with pubic carvings.

Extraordinary summits such as these two do stand out. Activators claiming them might well anticipate the questions that will inevitably arise over access by posting their experiences. Go on, you can amaze us all with some cool pictures! Otherwise do expect questions to be asked and ultimately for the MT to take action.

Thanks the really interesting information for these summits Simon.

I think there may also be a few of these in Tenerife as well, but one that stands out is EA8/TF-004 which similar to EA8/GC-002 and EA8/GC-008 has a rock on top of the mountain. So far I know that EA8/TF-004 has been activated once, but I wondering if the base of the rock on there is within the activation zone and if not is rope required to climb up that rock?

I’ve not found much on line about that one as yet, Jimmy, but it looks a far less difficult proposition, more of a scramble than a climb as the rock is quite broken.

I’m sure it won’t be easy but it seems quite a different league to those others Jimmy. Here’s a crude overly of the MDT05 LIDAR AZ onto Google Earth: 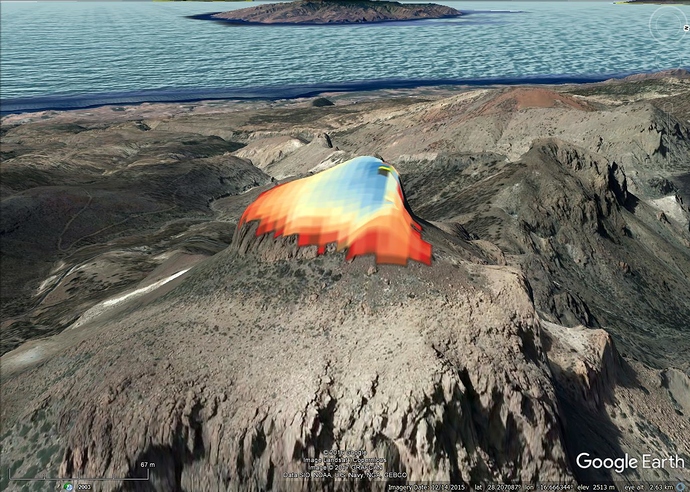 Cliffs to the west side, so this east side looks your best bet. If it’s too hard to scramble right to the top it looks like that ramp comes up just into the AZ. You might like to ask the previous activator for tips.

Thanks for the LIDAR data for the AS of EA8/TF-004, I agree this that it looks a lot easier than those 2 summit in Gran Canaria and looks as though the AZ extends to just below the rock on the east side.

I had 4 Chaser QSOs logged for EA8/GC-008 but no activations had been recorded for this summit on this EA8 GC Region page: EA8/GC 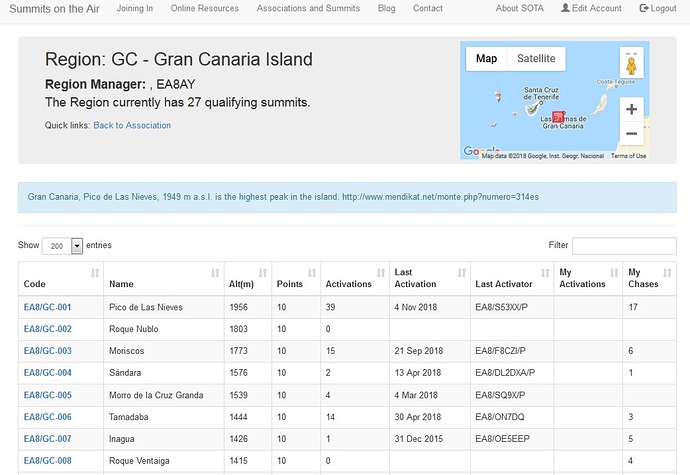 A search on discourse brought me to this thread.

The activations I logged were invalid due to the activation zone being unreachable without mountain climbing equipment and expertise. Either the activators or the database manager have now removed the logs but not being aware of this I had not deleted my chaser contacts until now.

I have now removed the said contacts. There may other chasers who have also recorded contacts with the invalid activations who may also wish to delete them.

My contacts with EA8/GC-008 were in 2016 and 2017 and so by doing an “in year” page search in the database of my Chaser log that is how I found them. The dates concerned were:

The QSOs still count for DXCC/IOTA but not for SOTA. 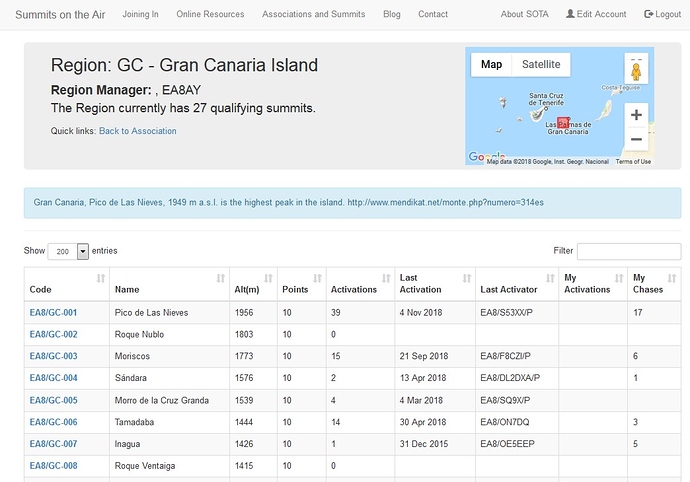