I recently have really enjoyed watching Chris, ZL4RA’s videos. Spoiler this will be like comparing Usain Bolt (ZL4RA) to Mr Tumble (Paul….G4IPB). As I write this I am still very slightly sore – my excuse is too much lockdown, although the reality is probably the run … erm gentle jog off last week’s hill (Rogan’s Seat G/NP-014) that probably wasn’t advisable. (This was, in hindsight a pathetic attempt to defy the years and pretend that I still have some fitness excused by Dad’s Taxi being required 2 hours earlier than expected)

I did experiment with trying to record a video of an activation but the combination of an unfit hillwalker and a springer spaniel sounding like a small steam engine panting along beside me resulted in somewhat less than perfect audio. Coupled with this I found that Woody, changing direction in the middle of a take resulting in my erratic lurching in random directions whilst hanging on to the camera made it look as if I was experiencing a severe neurological issue. Attempting to say anything which would not require censorship during this process was completely impossible, so I’m afraid you get the written version composed with a brain that is not in summit mode.

Sunday morning arrived bright and early and due to various complicated family arrangements I now not only had the dog, but my two teenage daughters in tow, who did a little bit of radio – trying to find out how far the air pods could be from the phone before they had to slow down for Dad… Car parking was easy in Ingleton – despite it also being used to give Covid Jabs. The family in the next car made a joke of the post lockdown family outing to the vaccination centre… We set off up the hill and almost immediately stopped to collect the dog poo just deposited. Ingleton, it seems does not do litter bins so the souvenir was carried for what seemed like a substantial distance whilst I juggled 2 walking poles (antenna supports), the dog and the bag… Curiously the girls are much more interested in the dog when a poo bag isn’t needed… 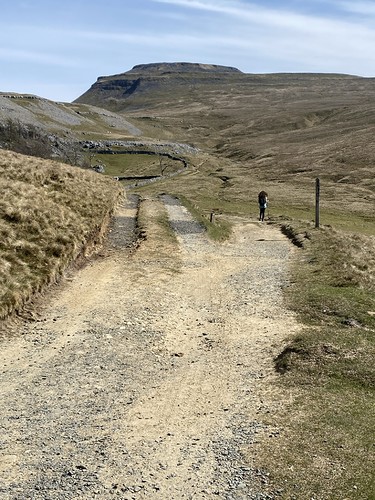 It is nearly 40 years since I last climbed Ingleborough, and it does not seem to have got any smaller so we made the summit in about two hours.

The dog obviously wanted to do it in one and was enthusiastically pulling me along. On my last activation a week earlier – the first since October and the subsequent lockdowns I rushed putting up the mast and linked dipole and managed to make a right mess wrapping the antenna round the guy lines and collapsing the mast as I attempted to untangle it, so this time I carefully worked out the position of the pegs and the antennas. Despite the large audience at the summit everything went up very smoothly and in no time at all I found myself trying to shut the dog up during the first few QSO’s. I spotted myself using SOTA Goat which worked flawlessly. Last weekend was another Mr Tumble moment when my spot sent from the Garmin Inreach failed to work. When I got back I went carefully through the settings on the Garmin website and device carefully looked at the message sent. All, it seemed was in order, but it probably took Andy less than a second to spot the missing space in the message rendering it useless. I can almost hear the Scottish mutterings about reading the b***dy manual! Sorry Andy….

Conditions on 80 and 60 were quite poor and I just made 4 QSO’s and then put a shout out on 2m to stumble into a S2S with a group on Cross Fell, making a S2S and a complete in one go! My carefully made plans on 2m were slightly thwarted my next Mr Tumble moment as the dog and my daughter managed to get the lead wrapped around the guys supporting the mast and the whole lot collapsed in the middle of a QSO. There was a bit of fiddling around as I found my Rh-770 Clone and explained to the chasers why my signal had gone down – still I suppose it proves that the J-Pole made from ladderline works…

Apologies again chasers for the barking Springer, he is perfect in the house, tolerates Teams meetings, delivery drivers and even cats sharing “his” chair in the office/shack but on the top of the hill he is a pain – he is desperate to keep walking! Reports seem to indicate he is usually about 20dB down on my voice…. 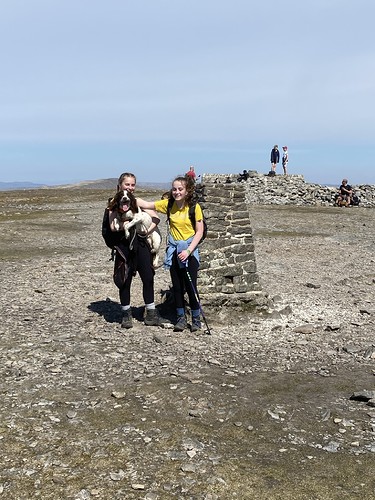 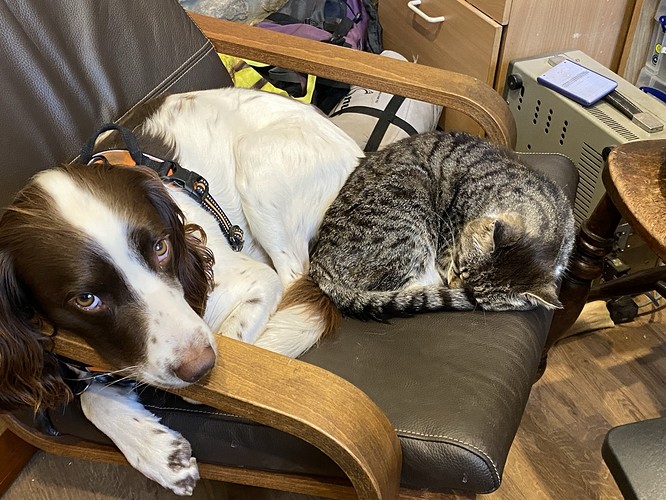 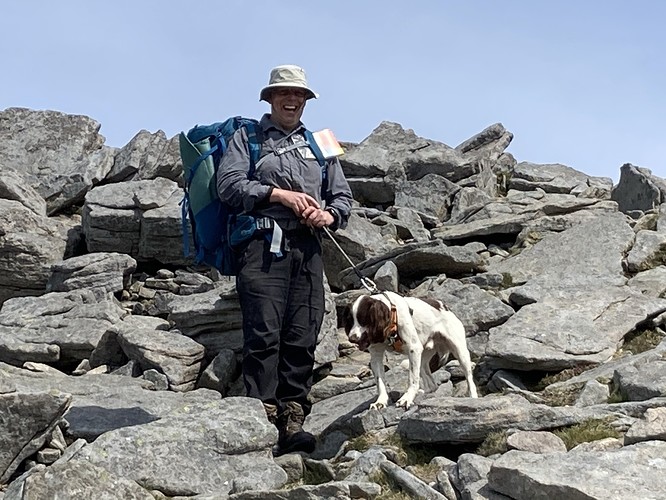 I have significantly changed my kit to try and get the weight down – I am aware that a diet would have been much cheaper and more effective but probably less interesting, so I now have a KX2 rather than the FT-817 plus amplifier, and the LiPo and the Buck converter have gone to be replaced with a LiFePO4 battery which seems to be able to power the KX2 for a very long time and have much less associated spaghetti.

Kit KX2, earphones, 4200mAH 4S2P LiFePO4 from Hobbyking – purchased on the day they were in stock, Tactical Mast, 80/60/40m linked dipole, 2m J Pole ladderline now with velcro to make attaching it easier, FT-270R – 2m Fm and backup rig. Garmin Inreach mini – really not needed on this hill as there is a good 4G signal and lots of walkers on the paths – unlike some of the other parts of the North Pennines, Blizzard Bag, Water Filter, Headtorch – (Now carrying a lighter model saving 100g) , screw in dog anchor and carabiner to attach the dog, dog bowl, dog biscuits, sachet of cat food (for the dog – don’t ask…), Water, iPhone with SotaGoat and Outdlog – although I usually use the rite in the rain waterproof paper and a pencil , short iphone charge lead and battery pack, Leatherman Skeletool, Suunto Ambit Peak – which provides accurate altitude readings, usually making it obvious that the summit isn’t just round the corner…. and (old timer bit) a paper map!

Missing Item – Probably more water. I took 1l but due to the dry weather, and subsequent lack of water on the hillside the dog drank most of it.

Bonus Mystery Item – The 2m J-Pole it seems…, or indeed all the HF kit as it would have been very easy to activate on 2m, but the activation would have lacked the excitement of collapsing antennas!

I think conditions were down slightly this week making a comparison between the FT-817+ PX-50M amp v KX2 hard to judge but it is definitely lighter. It took some considerable courage to dismantle my new KX2 last month to fit the side panels and heatsinks when it first arrived but it does make it more robust so it can be put in the rucksack without big concerns. The voice recorder is very useful freeing up the brain and hands during a CQ call. I can now call and self-spot more easily and I think the menu is a bit more intuitive than the Yaesu– although I’m not a big fan of the mic gain next to the volume control on the KX2 – I find it too easy to turn the wrong one! If the weather is a bit iffy (wet) the 817 will be back and I will be walking slower….

I hope this proves an interesting read. Ingleborough is an easy hill to activate and there are few risks with an obvious path to follow and a large summit so even an 80m linked dipole can be positioned so as not to cause any obstruction. Take off on 2 seems brilliant.

… The next challenge … well only 7 NP summits to go. If the weather holds up it will be Great Whernside next weekend, and I plan to finish on Whernside itself as the walk under the Ribblehead Viaduct is quite memorable.

Thanks to all the chasers again.

Hello Paul, thanks for your interesting report and kit details.

I think the Mini or SE, well one of the models, tries to be helpful and throws in extra spaces were they are not wanted and breaks the message for you even you enter the spaces in the right places.

The parsing probably could do with some improvement but I’m loathed to change for some simple reasons. I’d rather watch the telly and drink than make work for myself and I’m concerned that improvements have to accept all the inputs that work now and worked with some moderately malformed input too. It’s much easier to have a few substantial G&Ts and watch Winona Rider look stunning in “Turks & Caicos” on Netflix than write code that works well. Sorry but that’s how I am

I have Inreach mini - I think they must have used the same software designer as Yeasu as It isn’t entirely intuitive. I link it to the phone through an app and it becomes more manageable, however then Apple cunningly sneaks in and autocorrects the text and I think that was last weeks problem - oh and not brining glasses up the hill… :-}

I enjoyed your report Paul! A couple of dog pictures are always a winner (and put a face to the bark I heard

then Apple cunningly sneaks in and autocorrects

Yes iOS had a habit of adding a space to the end of a username and so people would find instead of trying to enter “USERNAME” they were getting "USERNAME " and then couldn’t log in!

You can try using the alternative decimal point chars the spotter supports. Back when it was written, European mainland users were caught out as they use a comma not a period for the decimal point. So comma support was added. Someone else complained they could not get a period or comma (which I think has to be user error) so I added a colon too.

Are all valid ways of entering the frequency and maybe one of those wont get autocorrected.

Nice report from my back yard summit!

Ingleborough is probably my favourite summit of all and I usually reserve it for my birthday activation. This year I chose to build my SMT Transmitter on Ingleborough so for my birthday it’ll have to be Whernside instead. I usually cheat and walk up Whernside the back way, I think I’m going to go up from Chapel-le-dale this time.

Transmitter built a few weeks ago on Ingleborough with gas soldering iron. 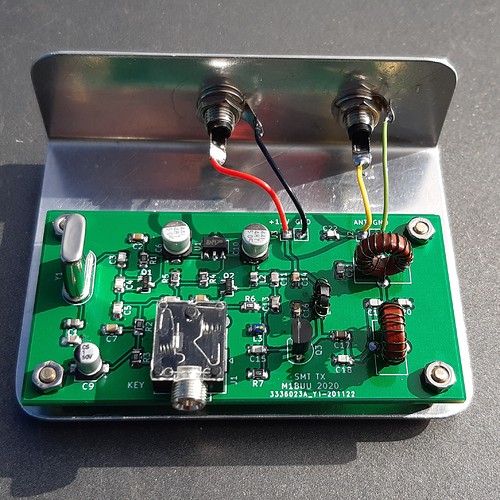 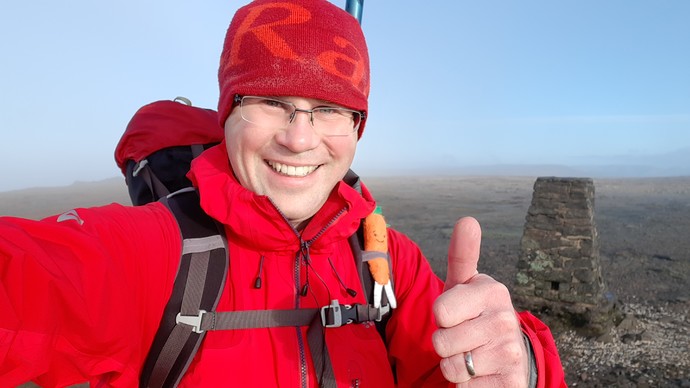 My daily view of Ingleborough on my school run.

There’s plenty of scope for qualifying with just a handheld and HF works well from there too.

I’m hoping to do an evening activation of Ingleborough in the coming weeks.

Heck, that’s high praise Colin, given all the lovely summits in G/NP and G/LD. Wonder what you especially like about Ingleborough. Lying 16 miles east of my village its distinctive profile is a constant on the horizon everywhere you go round here.

Impressive. And did it work at the summit?

I fancy an evening activation of my local summit G/LD-058 (Arnside Knott). If I’m available, I’ll try to time it to coincide with your activation if you want a 2m CW, SSB or FM contact.

Don’t know why Ingleborough is my favourite, it just is. I realise that I’m spoilt for choice living at the corner of SP, NP and LD.

Yes, the transmitter worked fine! 12 QSOs were made.

I’ll PM you about a possible S2S attempt.