I have lots of video from this trip, so I’ll keep this report as short as possible.

Last week I traveled with my wife Allison (KD9JOK, soon to be KN0MTN) and Jeff (AA6XA) to the great state of New Mexico to complete Fred’s (KT5X) Iconic Peaks of NM Award (IPNMA) challenge as detailed on the WS0TA QRZ page. It was also Allison’s birthday weekend, and who doesn’t like to do SOTA on their birthday?!

We ended up doing 5 peaks in 4 days (Jeff went for extra credit and did a couple more):

We got to our airbnb outside Taos late Wednesday, so we our first day started fairly leisurely. After a ~3hr drive, we reached the Hermit Peak trailhead and got underway. Logistics for Hermit are very simple: park at the El Porvenir campground trailhead, find trail #223 and follow it to the top. My watch said it was about 5mi each way with a total of 2600’ of vert. The views from the top were spectacular given that Hermit’s east face is a sheer cliff and faces out over the plains. I used an untested antenna setup that Adam K6ARK had graciously lent me for the trip and it worked fb. Lots of contacts. Solid way to start the trip. 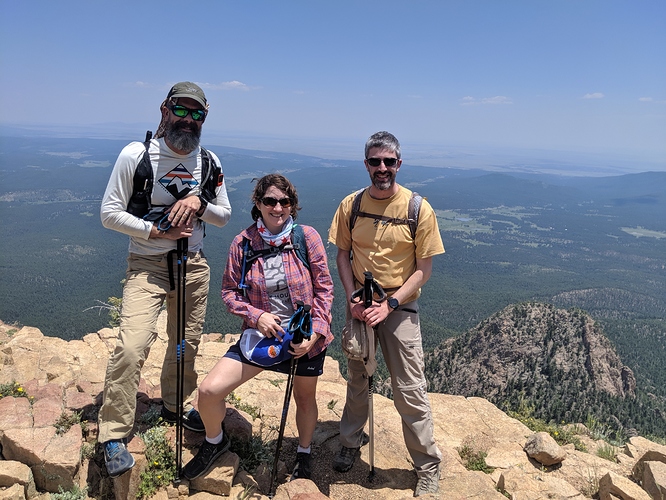 Wheeler Peak, NM’s high point, was to be the centerpiece of the trip as we intended to do the airy cirque which started atop Wheeler and wrapped around Williams Lake. Our original intention was to do the route on Sunday, allowing as much acclimation as possible. By Thursday afternoon, we could see that Friday would be the best wx of the trip, so we decided to go for it. We were up at 0230 and on the trail (a little late) at 0400. We moved faster than planned but the route was somewhat longer than advertised so we missed sunrise on Wheeler. That said, the views were breathtaking. Despite the early hour we had tons of chasers. Thank you all so much!

We headed off to do the cirque and were having a good time until we reached a spot that felt like it passed from class 3 into class 4. This could have been due to our routefinding skills. If Wheeler had been the last of the 5 needed for the NM Challenge, we might have pressed on, knowing that if we died, we’d have done so having achieved our purpose. As it was, we decided to turn around and live to climb the other 3. Descent (which included a nice glissade) was blissful, as were the beers we had apres climb.

Getting close to the summit 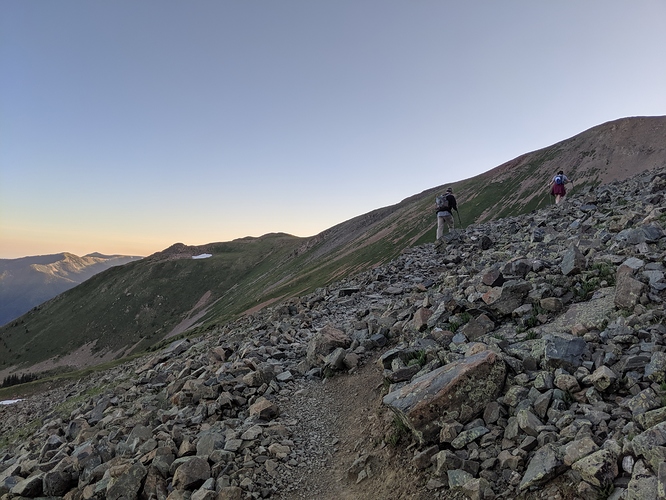 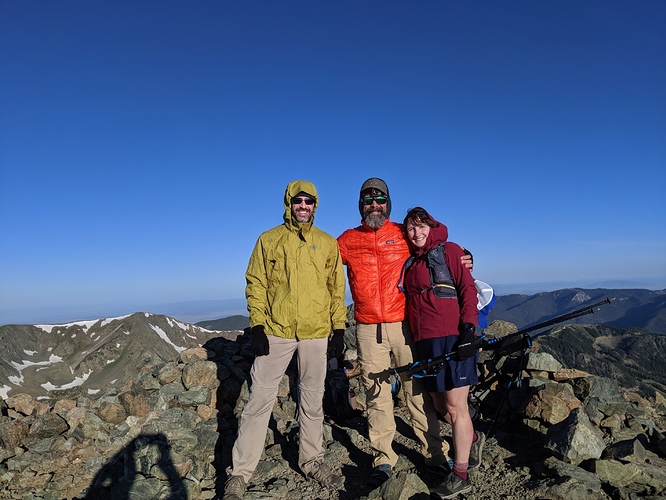 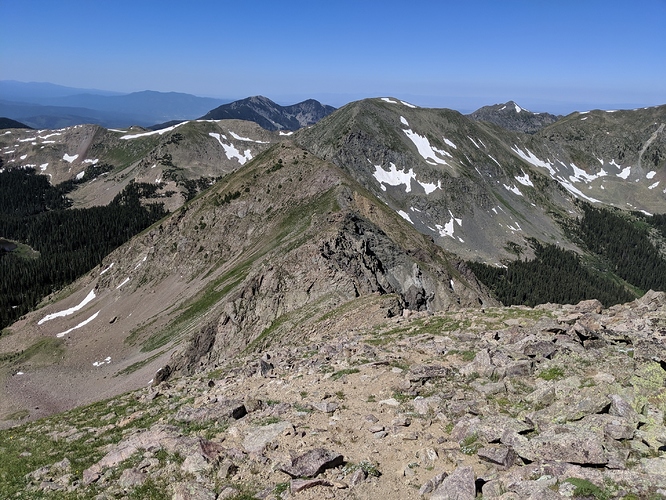 The wall where we turned around (affectionately known as FU Wall)

Capulin is an extinct volcano in the northeast area of NM, and a designed National Monument. It was a pretty 3.5hr drive from our airbnb. From the parking area at the top it’s a quick walk to the AZ where there were approximately 4000 people checking out the view (which was nice!) and many times more flies. We activated very quickly and headed down. 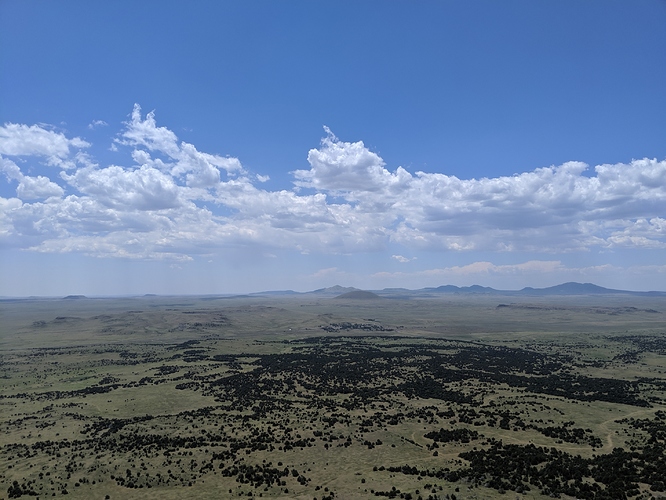 Our last full day of the trip, Jeff and I set out for a twofer. Allison decided she’d had enough of us and stayed home to watch the desert bighorn sheep.

Pedernal is possibly the most iconic NM peak – google for more info. We took NM 98 to FS 100. After 5.5 on 100, we turned on to an unmarked road and drove as far as we dared. From there we hiked the road until we reached the meadow below Pedernal. From there it’s a steep class 2 ascent over a talus field. Attaining the summit involves locating a specific weakness in the rock band at the top which is otherwise class 5. I won’t rehash that beta here, but neither of us thought it was the class 4 summitpost etc rates it – more like 3 with exposure. The top was just mindbendingly beautiful, maybe helped along by the fact that I’d looked at this peak many times over the years. We’d no sooner worked a band each than and incoming storm forced us to beat a hasty retreat. 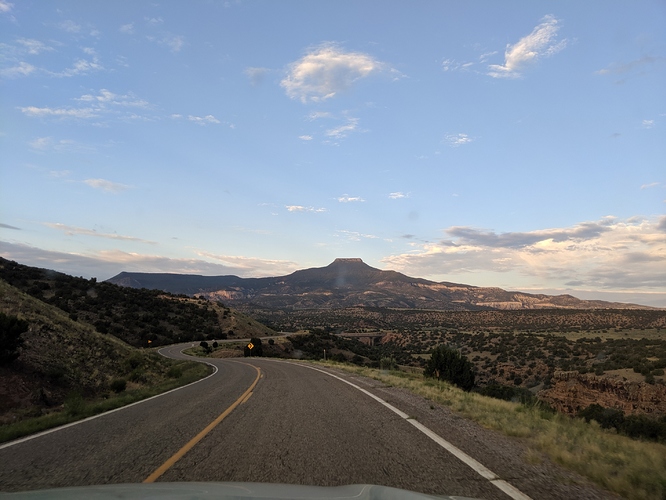 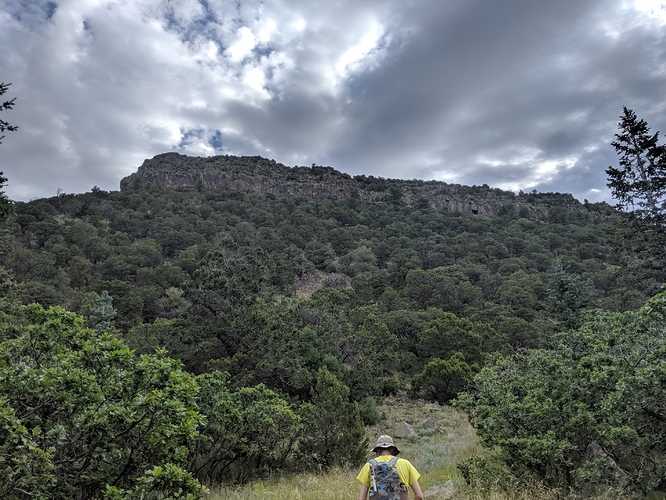 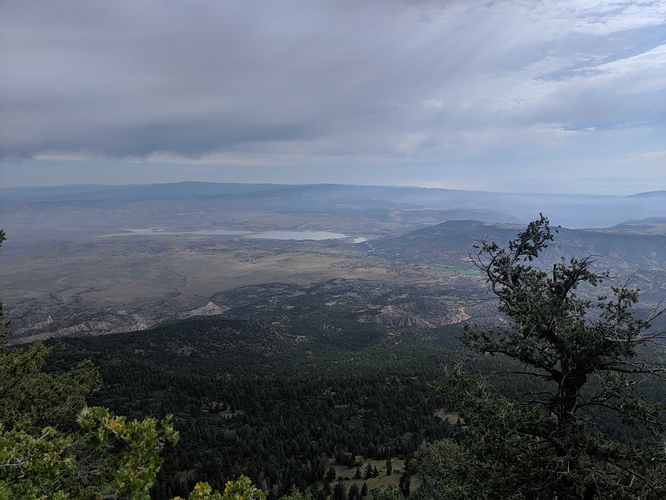 The less said the better about the atrocious road from Pedernal to Chicoma. We (Jeff was driving) followed what were suspiciously vague directions involving FS 144. Those 50 miles (it was actually 26.2 each way) are living proof why one should never buy a used rental car. This road, not the climb on the cirque nor Pedernal, was the crux of the IPNMA.

We parked at 36.02148, -106.38973, and had a very pleasant ~1.5mi bushwack to the top. We agreed that the summit had a decent claim at being the most beautiful of them all. It was particularly snazzy to look back at Pedernal in the distance. We spent the longest time activating Chicoma, and despite the fact that it completed my IPNMA, I was a little sad to head down.

Chicoma summit (Pedernal in the distance) 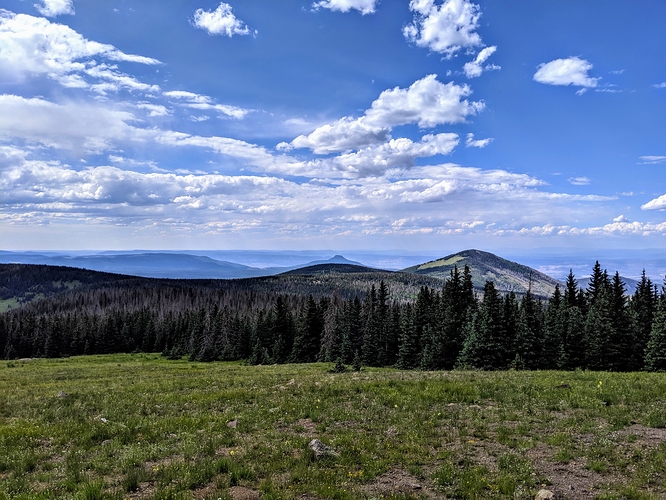 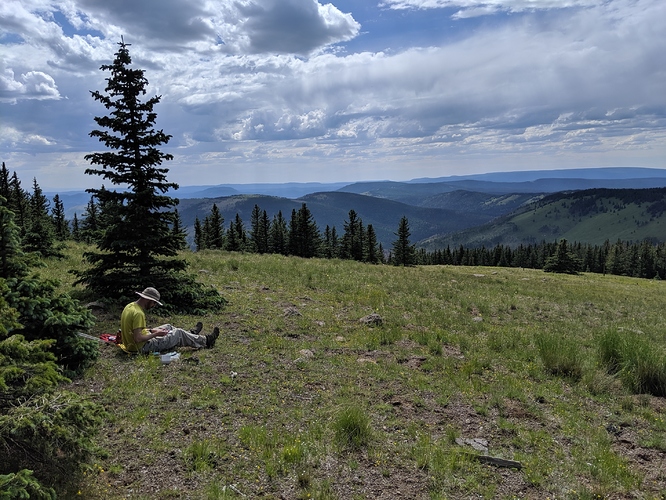 That’s it! Many, many thanks to Fred for giving us this fantastic excuse to come to the Land of Enchantment. Allison and I climbed Wheeler Peak many moons ago on our first date (and were later married not too far away), and it was good to be back. Thanks to both her and Jeff for being fantastic climbing partners.

If anyone wants my view on the hikes, I’ve finished writing up my trip reports. South Sandia is on Fred’s Iconic Peaks list, but the the last one is just a nearby peak I did to kill some time.

New Mexico is a beautiful place, and I would encourage everyone to head down there and see the beauty for yourselves. I hope to have a reason to head back and explore more of the state soon. And to get some more fresh green chiles.

Epic trip, guys!
One correction to make is the reference for Capulin: its SG-009.
Alan

One correction to make is the reference for Capulin: its SG-009.

Thanks for the activations. It was a pleasure working you.

Thanks for your “short” report, Joe.

Hoping here that this type of birthday gift has been well accepted!