And I thought I was the only one not getting answers when doing SSB while activating SOTA in Japan but apparently not. If Masaco-chan can only manage 1 QSO then you know it is nothing personal

Must spend more time in Grasmere when the new normal arrives Mark. Maybe that is where we should go… Stay in the valleys and avoid the summits. Happily married (and quite wrinkly now) but, joking apart:

What a great marketing pitch that video is, it got me interested in viewing the other thread and actually seeing what the radio is like. Whilst the front of the IC-705 makes it look like a large radio, first impressions, it isn’t very deep in fact. I wonder how if it will sell to SOTA Activators and will the dealers throw the purpose built rucksack in as a freebie once they have had the intitial buying rush? My Elecraft KX2 (Fitted with one of the last Palms keys sold by SOTABeams) is not for sale yet!

PS Backpack doesn’t look like it will have room for much room for the essentials of food, drink, pole and decent wire antenna. 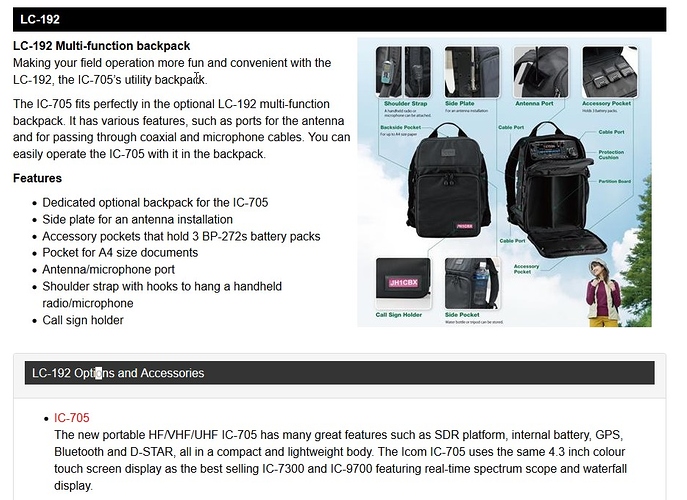 Does the backpack have an Anvil attachment point ???

Yes, it’s looks a bit twee and lacking for a 105lb one. Even lacking for Paul’s wimpy 75lb “beginners” anvil.

I really, really welcome the IC-705 - it can only have a positive impact.

They are kind of copying what happened with their iCom 703 backpack but for 2020.

I know it won’t be for SOTA activators with crampons and icicles in their beards but it is just another option that you could choose, for more leisurely summits.

I have really enjoyed my time with the MCHF SDR transceiver, especially of an evening, picking out stations using the SDR. I can’t complain about weight or battery life given that I have been known to take FT-857 and 3 x 4200 maH LiFePos up big hills.

More portable radios is great. Bring us more radios! Give us more choice!

I bought her album and joined the fan club. I am waiting for her new Cookbook on backpacker meals

She is setting up a schedule for QSOs
John VE3IPS

I wonder after all the radio bits in the backpack which is quite small if there is room for a flask of coffee and some Ramen?

By the way an interesting point - the list price for the IC705 is markedly higher than that for the IC7100 - which covers more bands at a far higher power! By the way ICOM UK/Europe have dropped the planned 4m band support from the IC705. I asked whether they would be enabling 8m for the countries that now have it - it seems not, so will there be some self-diode snipping possible to wide-band the rig?

Its also unfortunate that they are not supporting the full 70cm band in the US (420-450Mhz). Full coverage can help with transverters and such if nothing else by giving a 30Mhz wide IF. The 9700 also does not support the full 70cm band and there is as of yet no modification and Icom seems to suggest that they will not provide one when I asked. This is dangerous as we need to use our bands or risk having them shrunk like 1.25m in the US or lost completely.

My Icom IC80AD was only guaranteed to work to spec on 440-450MHz.I was worried that it would not perform well when I brought it back to the UK. ISTR I had to change something in software and it then would TX from 42?MHz to 450MHz. It covered all the EU 70cms allocation (430-440) and was fine. It may well be that a significant chunk of the allocation is covered when the set is “opened up” but only a smaller section is guaranteed to meet the published specs.

Be aware that the IC 705 has no built in ATU, as for the price, it is not that far from a KX2 with atu?
What I would do when considering the IC 705 is being patient and see what reviews come up after some time and what issues might reveal itself.

They are kind of copying what happened with their iCom 703 backpack but for 2020.

The IC703 had a fairly short lifetime, perhaps this one will last longer…perhaps.

Incidentally I should think that it would be pretty uncomfortable having crampons in your beard!

Be aware that the IC 705 has no built in ATU, as for the price, it is not that far from a KX2 with atu?
What I would do when considering the IC 705 is being patient and see what reviews come up after some time and what issues might reveal itself.

I agree about the IC-705 - it’s expensive, which proves again that portability comes at a high price when you compare this QRP transceiver to QRO not so portable radio’s with SDR architecture like the FT-991A and the IC-7300, both have automatic ATUs.

Hi Ed,
Do you still get AR magazine? It has 3 Reviews of the IC705 in the latest issue.

Re price, Icom seem to have it about right. They can’t supply enough for the US market.

I would not buy the backpack unless you were going to operate VHF or UHF when walking.
On hf dinky little antennas give dinky little signals. A trailing wire counterpoise would to be essential for any of these reduced size mobile whips. I already have a collection of backpacks to transport the radio, food and water etc .

It does, however, have a connector to control an ATU - a later external option perhaps? Many said, when they first saw the IC705 why not have an internal ATU, like the IC-7300, the Elecraft models and even the Chinese Xiegu G90 but it seems they simply did not have room in their design.

When first announced in the UK/Europe, the 705 was going to cover 4 metres (70MHz) but then that band was removed - I’m not sure if that was for technical reasons or marketing ones and whether with a clip of a link it might be possible anyway. With more and more new base rigs coming with 4 metres, it would be nice to see a portable rig with it as a standard feature (even though we could not use it here in Germany as neither 6m nor 4m portable operation is allowed).

Hi Ed,
Do you still get AR magazine? It has 3 Reviews of the IC705 in the latest issue.

Hi Ron,
No as I am no longer a member of the WIA I don’t get AR mag, however I still get the email notifications of the AR magazine, a graphic of it’s front page and list of main contents though - go figure? Perhaps it’s because I was once an associate member (an idea that seemed to disappear soon after it started, in 2014 I think).
This month’s “Funkamateur” magazine has a review of the IC-705 though - on the front page in fact. So I’m sure the ICOM publicity engine is feeding every amateur radio magazine in the world with information and taking out Ads to sell the rig.

As regards an Antenna that performs well on HF and will pack into the IC-705 backpack (or any of a similar size and quarter of the price) - I am reviewing one on the ICQ Podcast, this coming weekend.

You have to stop to set it up though! Backpack mobile is something for military rigs looking for short distance comms!

They can’t supply enough for the US market

Might be the early adopters rush. I’ve haven’t checked worldwide price variation for the 705 but remember historically manufacturers of electronics and other high-value goods sell their products with low margins into the lucrative U.S. market and get their profits back by selling them with higher margins into Europe and especially the UK. More’s the pity with our lower disposable incomes.

The price of rigs is on an upward trend, inflation alone sees to that. For the current dollar cost of an IC705 I could have bought the entire stock of the local Yaesu distributer in 1966.

The 705 is already discounted here and I would be amazed to see the price change by more than 5% over the next year. The ham radio market is different to the normal consumer market. For an idea of the price change look at the IC7300 and the FT817/8.

If the sales of the 705 flag then free whip antennas and an Icon cap will be offered and a half price back pack.

I think Icom will struggle to make enough 705s for the next 12 months. That will hold the prices up IMO. YMMV.