Having just purchased an LDG YT-100 tuner for my FT-857D, I need to make up one or two antennas for HF portable use. I’ve had a look on the web and found quite a few designs for multiband use etc., but just wondered what you guys use and find best. I’m 90% through making an HF Delta loop & 9:1 UNUN for it, which would be ok for next-to-the-car type operation, but I would like something more lightweight & portable.

Click the link marked “reflector” at the top of this page and type “antennas” into the search box and press return.

In reply to M6HBS:
tion, but I would like something more

Don’t come much lighter and portable than a linked dipole, Jonathan.

In reply to 2E0YYY:
Thanks Mike, I’ll take a look at those. I can’t access the one referred to on the Reflector at the the moment, but will have a look from home.

In reply to 2E0YYY:
Thanks Mike, I’ll take a look at those. I can’t access the one
referred to on the Reflector at the the moment, but will have a look
from home.

In reply to M6HBS:
If you are not going to carry a tuner and are prepared to get up and reconfigure things when changing bands, then definitely go for a linked dipole.

If you are going to carry a tuner and want to use a number of bands without ever having to leave your cosy operating position, use a lightweight doublet with a balun into your tuner. Google “Norcal doublet”.

I use an 88ft (“double Norcal”) computer ribbon doublet, which weighs VERY little, from 80m upwards with an LDG AT7000 tuner. I have also used it on Top Band with the same tuner by strapping the feeder and tuning against a counterpoise by reconfiguring the balun as an un-un.

A few of us use W3EDP antennas: a 25.6 metre end fed centre supported with a small counterpoise lying on the ground, 5.18 metres for 3.5, 7 and 21, 1.98 metres for 20 metres, tho’ I don’t find this critical. This antenna has the advantage that you don’t have to get up and mess around changing bands (a consideration on the more rocky summits or in less pleasant conditions when you’d rather not leave any bit of shelter you’ve found), instead you use the disadvantage, a tuner! This need only be a simple parallel tuned coil and capacitor but it will work with a conventional T-tuner or a Z-match.

John G1STQ and myself, have worked some good dx with his homebrew linked dipole. Simple, yet very effective. IIRC Adrian, he worked JS6DMT on Okinawa using 5 Watts and his linked dipole, earier this year.

For something different here is a portable cobwebb type antenna for 20m/17m/15m: 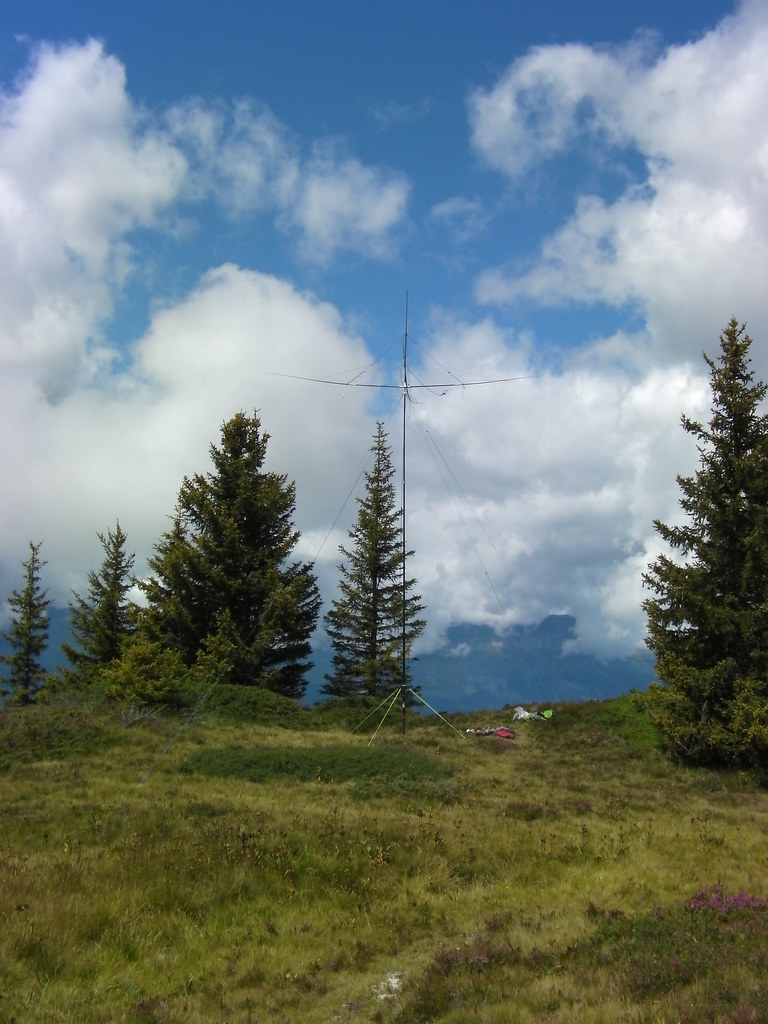 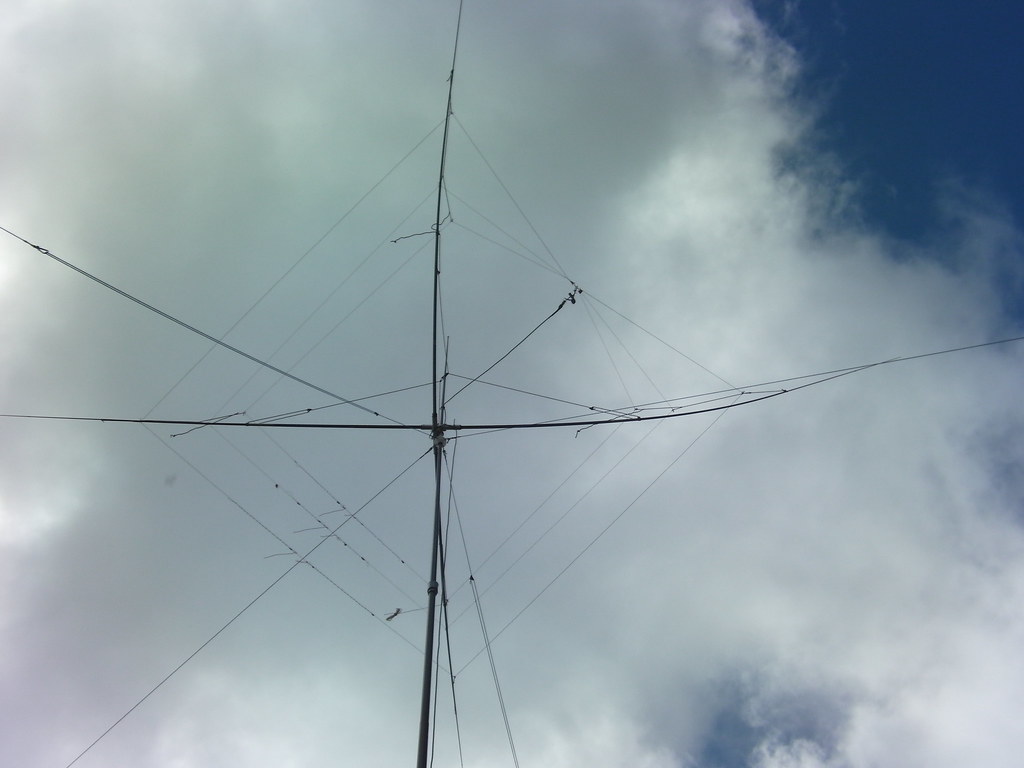 Looks a bit too heavy for portable use!

In reply to 2E0YYY:
Thanks all, definately some food for thought there. May have a go at the Linked dipole first I reckon, which would suit my needs at the moment.

Have to second Marc with the Norcal doublet. I made one out of a network (LAN) cable. After removing the shield I used one pair of the twisted pairs (there are 4 pairs inside). I left 8mtrs twisted together as a feedline at both ends fixed with shrink tubing to prevent the twist coming loose. The next 6,5 mtrs are untwisted and voila, the whole antenna has 70 gr including feedline (!), no problem even for the smallest segment on my fishing rod.

The antenne works on 40/30/20/10 as expected and after more than 10 summits I can say that I finally found my SOTA antenna. I never thought that a twisted pair can be used as a feedline, got the suggestion from dl2fi (qrPeter) and he was absolutely right.

The linked dipole has imho two disadvantages: The weight is still to heavy for my flimsy fishingrod although using RG193. The used wire tends to get longer after longer use and you have to shorten to get optimum swr.

Yes, I have to take a Z-Match with me (ZM-4 from qrpshop in my case) and I must add its weight to the antenna weight for carrying but the Match stays on ground and doesnt bend the mast

Neo: It’s like Déjà vu all over again.
Trinity: How much like it? Was it the same old question?
Neo: It might have been. I’m not sure.
Morpheus: Switch! Apoc!
Neo: What is it?
Trinity: A déjà vu is usually a glitch in the Matrix. It happens when they change something.

Agent Smith: Tell me, Mr. Anderson… what good is an fancy amateur radio… if you have no antenna?

Oracle: Sorry, kid. You got the rig, but it looks like you’re missing something.

Morpheus: I’m trying to free your mind, Neo, but I can only show you the door. You’re the one that has to walk through it.
Neo: And this door, how will I recognise it?
Morpheus: Google is your friend Neo!

Morpheus: Neo, sooner or later you’re going to realize just as I did that there’s a difference between knowing the path and walking the path.

Morpheus: Unfortunately, no one can be told what amateur radio is. You have to discover it for yourself.

Probably best to avoid posting on the reflector after a night-shift and a few beers!

In reply to G3CWI:
Topic closed I think.

The only problem with asking your original question about what antennas do people use and find best is that it will be almost impossible to find a consensus. Ask 100 people and get 100 differing opinions and experiences.

Portable antennas, by their very nature, have to be a compromise between efficiency, durability and practicality; so a very wide set of variables to contend with.

What I have found is it can be quite difficult to replicate some designs you find on the web. Often it is down to simply not being able to find exactly the same wire, cable or co-ax as the original design; these can have significant effect on performance; all this means is that you have to do quite a bit of experimenting.

Personally I don’t like using tuners if I can help it, especially portable. Tuners are just another piece of equipment to fail, get wet or just not do what you want. So All of my antennas are simple (ish) and resonate where I want.

From my experience, low slung inverted V dipoles (with an apex about 5m) are fine for the lower bands like 80, 60 and 40m during the autumn, winter and early spring. 60 and 40m low dipoles are ok during the summer when there is plenty of sporadic E about. 80 metres is just too unreliable during the summer, sometimes it works very well but I tend to not bother too much with that band unless it is first thing in the morning or late in the afternoon. For 20m and up I just feel they are too compromised in their radiation patterns, not saying you cannot get contacts on those bands because people do.

40 metres is my crossover band I have both dipoles and verticals for this band (the band can sometimes be unreliable during summer); below I only use diploes above only verticals. My reasoning is, for bands like 80, 60 and 40m low dipoles give an omni-directional pattern with the maximum amount of energy going straight up to take advantage of NVIS propagation. On 40m and upwards I want my signals to have a much lower take off angle for maximum coverage; ground mounted verticals appear to provide this better than low dipoles.

During the summer my main antenna is a vertical 9.5m (ish) piece of wire (with 3 9.5m radials) supported by a 10m fishing pole. This simple arrangement performs very well on 40m. I use the same piece of wire and load it with a length of 450 ohm ribbon to turn it into a ½ wave at 20m, again very simple with no tuner. I also load the same piece of wire (with a co-axial stub) to get a 5/8 wave vertical on 17m, this configuration gave me and Robert (G0BEB) possibly the greatest distance S2S, so far, when I was on a summit in Germany and Robert was on The Falklands.

I have been experimenting (with some success) with a combined 15, 10 and 6m ground plane antenna with raised radials (15 and 10m ¼ wave and 6m 5/8 wave). The only problem with these bands is that you have to be in the right place at the right time to get contacts, propagation is often very unreliable; but when they are open DX can be very easy.

So going back to the beginning, for the bands you want to use and from my experience; no tuners, verticals and try to choose the right band for the right time of year/time and experiment loads.

Another thought (something I do), check the data base for what contacts people make on which bands at which time of year and time of day. Find who has the most reliable contacts then find out what they are using in the way of modes, antennas and power levels (most of mine are in the 10 to 30 watt range, using Li-Po batteries and only use ssb).

Have fun/frustration (delete as appropriate)

Carolyn, would you mind expanding on your 20m antenna, please? I like the general idea but don’t quite get the loading.

I use the 450 ohm ribon to turn the 40m 1/4 wave into something like a 20m J-pole. The ribbon is at 90 degrees from the vertial radiator at ground level, no radials.

Thanks, Carolyn, I get it now.

In reply to KD9KC:
How do you connect the doublet to the T1, a balun of some sort??