WX forecast was for rain showers in the morning and an essentially dry and sunny day which meant more SS completing.

This is yet another summit which once was a good viewpoint and has a trig but has been “conifered up” and now has no views and is a bit of a maze to find the summit. There are several ways up and none are very far or difficult. There has been some harvesting of the mature trees. I decided to follow Phil G4OBK’s route that leverages the Grange Quarry. As the quarry does actually blast rock and has lorries running in and out you want to do this at the weekend when it is shut.

Like Phil, I parked near the locked up gates to the quarry. There had been heavy showers by the standing water and the sky was ominous. It showered hard for 5mins just after I had put my boots on but not enough to delay me. I was perturbed by the sign waring of dogs patrolling so I took a route in the neighbouring woods rather than through the compound. Quite steeo but easy going and I hoped over the fence about 1/3rd up Grange Bank. Good progress is made by following a road made from rock spoil. This tops out at and it was time to follow the GPS in earnest.

With a simple task of follow the arrow, I set off ignoring the GPS. Then checked, swore and doubled back. Up the correct forest ride and I did the same charade twice more. How hard is it to follow a GPS ? Very, I kept wanting to press on and not look at the screen. Suffice to say if you follow Phil’s GPS route it takes you right to the clearing holding both trigs! 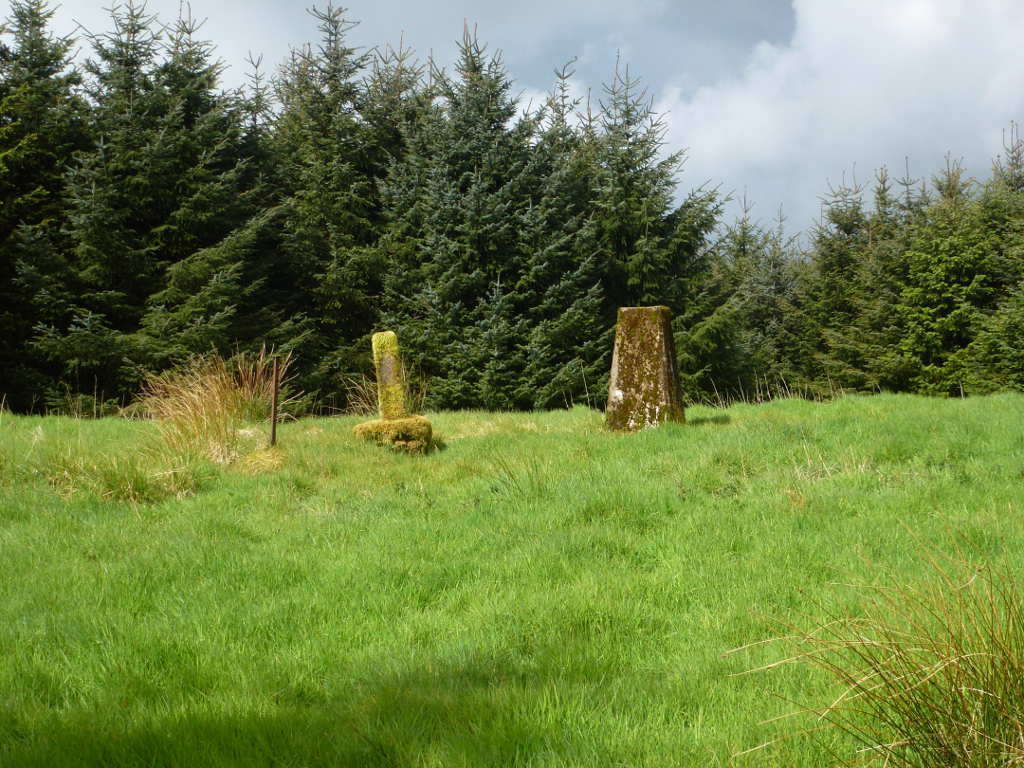 It took about 35mins including faffing about backtracking. Apart from Grange Bank I didn’t think there was any climbing. I supported the fishing rod using the smaller concrete post. The main trig is one of the last installed in 1959. The clearing is big enough for an 80m dipole but the trigs are not in the centre so my 60m dipole just fitted. 60m worked well with stations about 65miles away being easy copy. 40m was long as it has been for ages. I squeezed in a few 40m CW contacts including LA1ENA who activated this summit a few years back. After that is was rip down the station and get out to the next summit.

I could only get a poor mobile signal from the clearing on my old Blackberry “other” phone which does 900MHz. It does work better than the 3g phone on 2.1GHz when you cannot see any roads or are obstructed by trees as the signal propagates through obstacles better.

This view comes as a surprise on the way down as it is the first time you see anything but trees. It shows some ascent as well but I didn’t notice it! 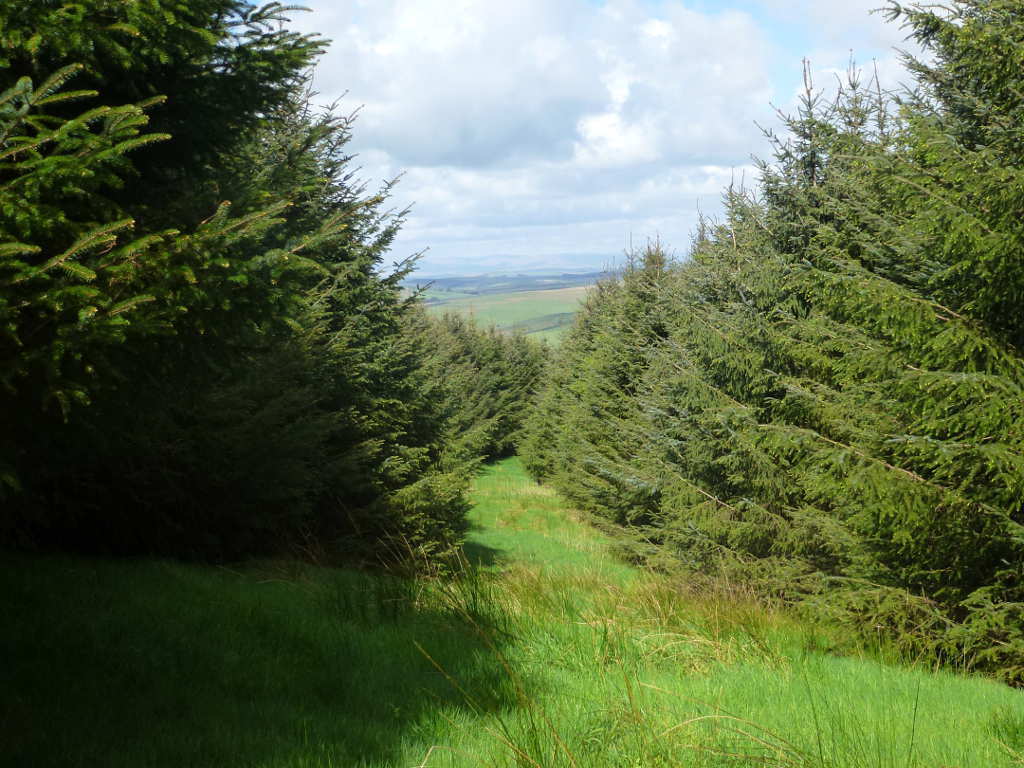 Finally here’s a view of the quarry. This quarry is shown on the 1957 OS map. I think at the rate they are using the mountain, you have a few thousand years to bag this one. Not sure how much longer the trees have. 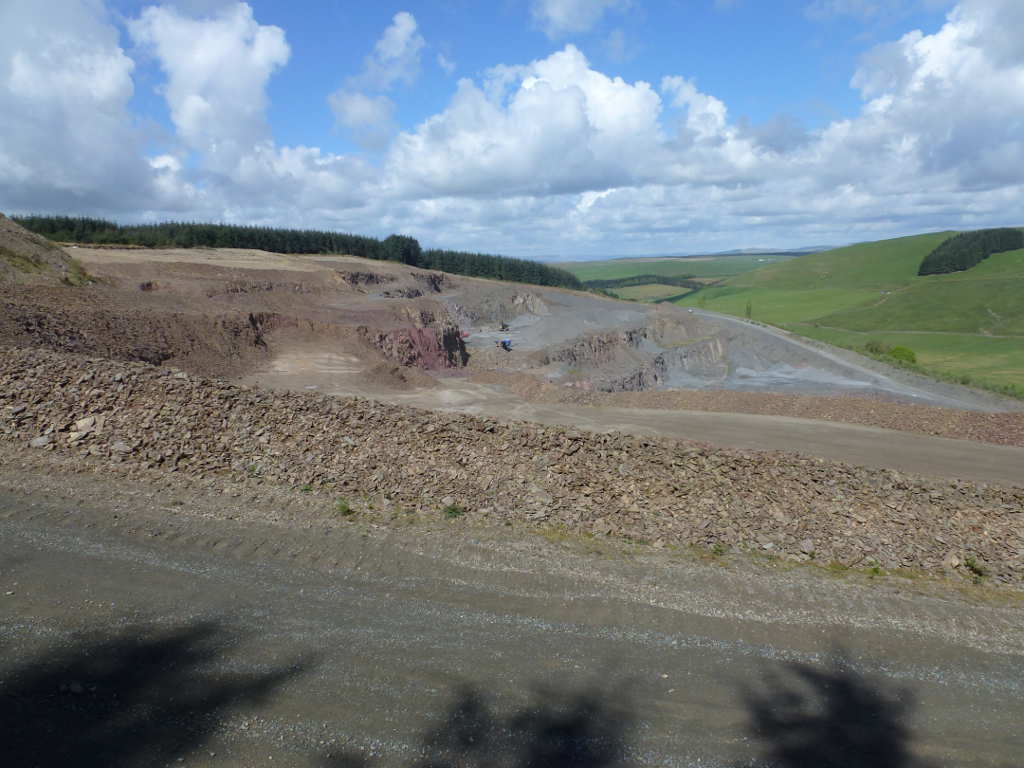 This is just the other side of Ewe Hill. In fact the trig is on Ewe hill, about 650m from the summit of Calkin Rig. Maybe the trig is in the AZ but I wasn’t sure. They’re building another big wind farm on Ewe Hill and so soon there may be a good windfarm road that takes you to nearly the summit. Instead I drove down to Langholm then up the road to the great golden teapot up at Eskdalemuir. The track that leads in is just past Bombie Cottage and before the village of Bentpath. When I arrived at the sign for Bentpath I knew I’d gone too far, did a U-turn and found the track about 1km back. There space for a few cars to park without blocking the track entrance especially if you park by the bridge. You can get another car behind mine though I don’t know if my silly tyres would like dropping off that kerb! 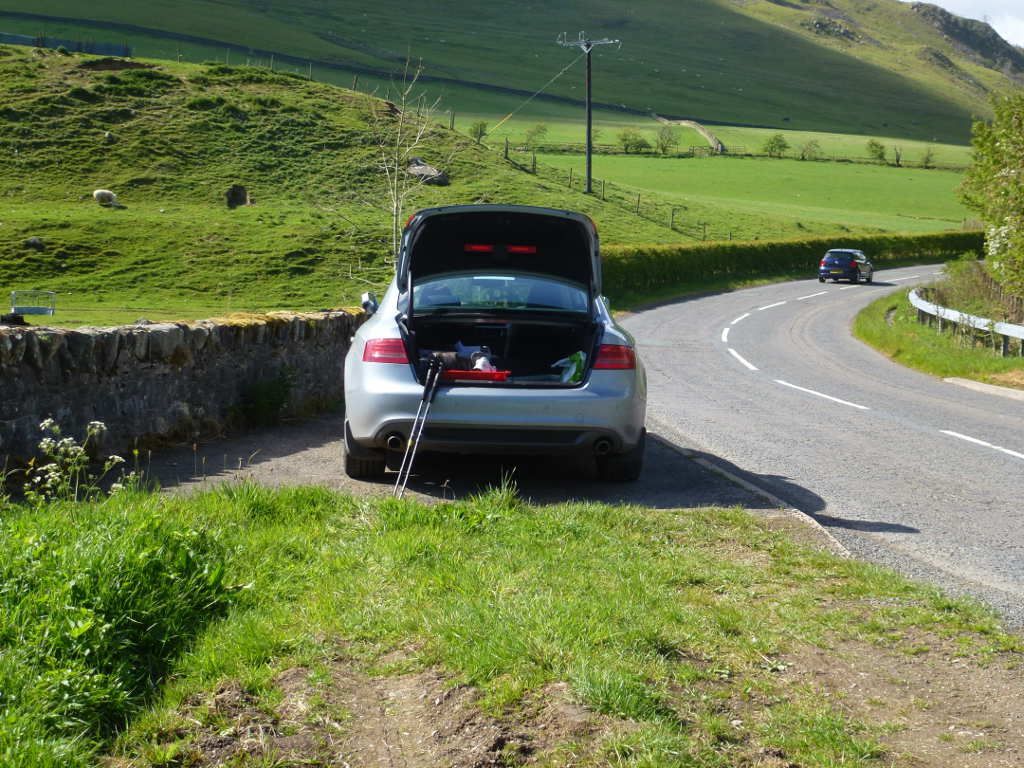 The track is easy going and almost level. At the first fork go left or you’ll end up fording the river to realise you are on the wrong path and will have to ford it again and maybe get a wet sock. Here speaks the voice of experience! After that the next fork is right at the farmhouse at Old Hopsrig. Through the gate and note they are shooting vermin according to the sign. That sign looks like it has been on display for a long time. I’m not sure if that is legal to leave a shooting in progress sign out when you know there is no shooting occuring. Anyway, I made sure I kept my imaginary dog on its imaginary lead as the other sign stated and kept on the path. The clouds on Grange Fell had gone and whilst the breeze was cool, the sky was 80% blue with the odd fluffy white cloud. At the deserted and derelict Calkin cottage you have to decide when you are going to start climbing the 265m bank to the top. It doesn’t matter where because the only way is up.

After what seemed like a lifetime but was about 45-50mins the climb is over. The lower part is good short grass but it soon deteriorates to tussock grass which slows you down. After a long dry spell on a nice sunny day it was a sheer delight climbing this. On a wet day after lots oif rain I can see this climb being sheer misery. I think I picked a good time to do this one. At the break in the forest at the top you can see the true top. I stopped at the corner of the fence. I was 5m from the summit and 200m horizontally. There were old fence posts and the trees were set well apart. But here I was in the AZ, had a fence to support the antenna and was not in the trees to hamper the RF’s escape. 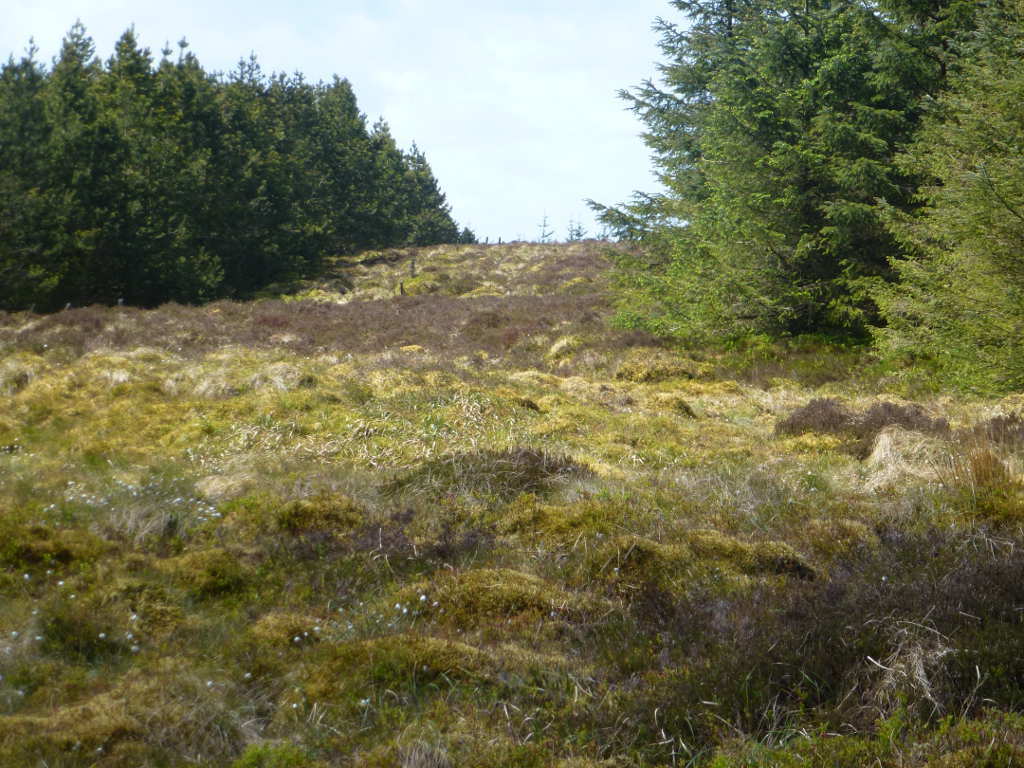 Best of all I had what I think is a rather splendid view.

East from the near the summit. The highest point in the far distance on the right of centre is Wisp Hill SS-118 which I did not quite 10 years ago. 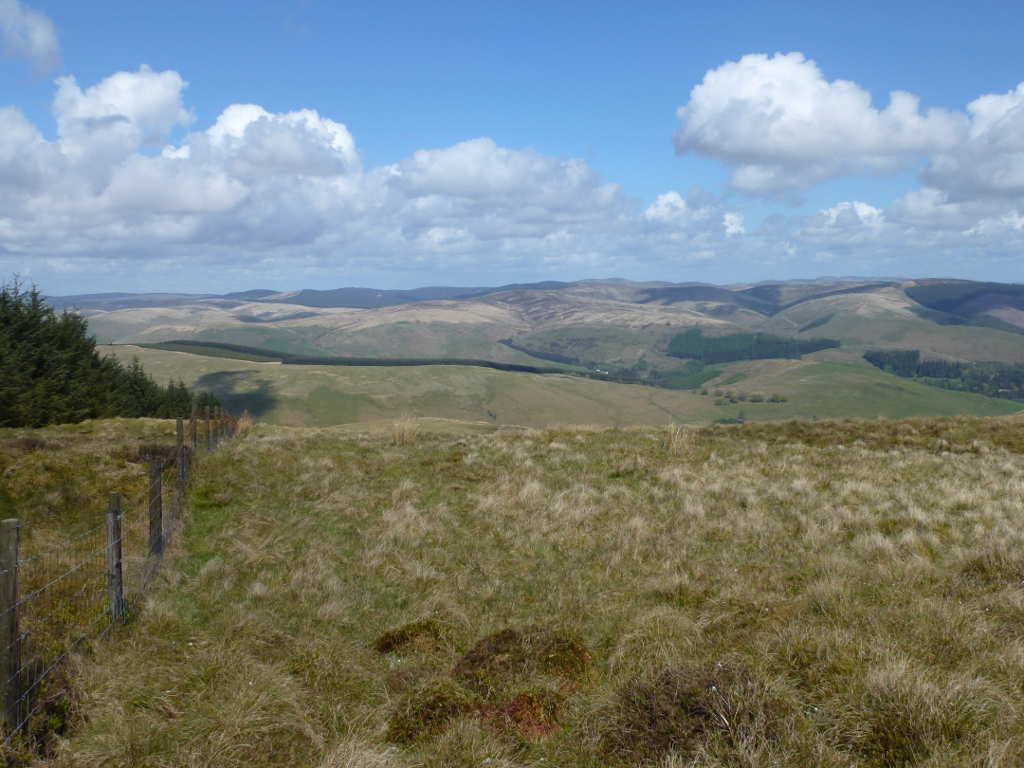 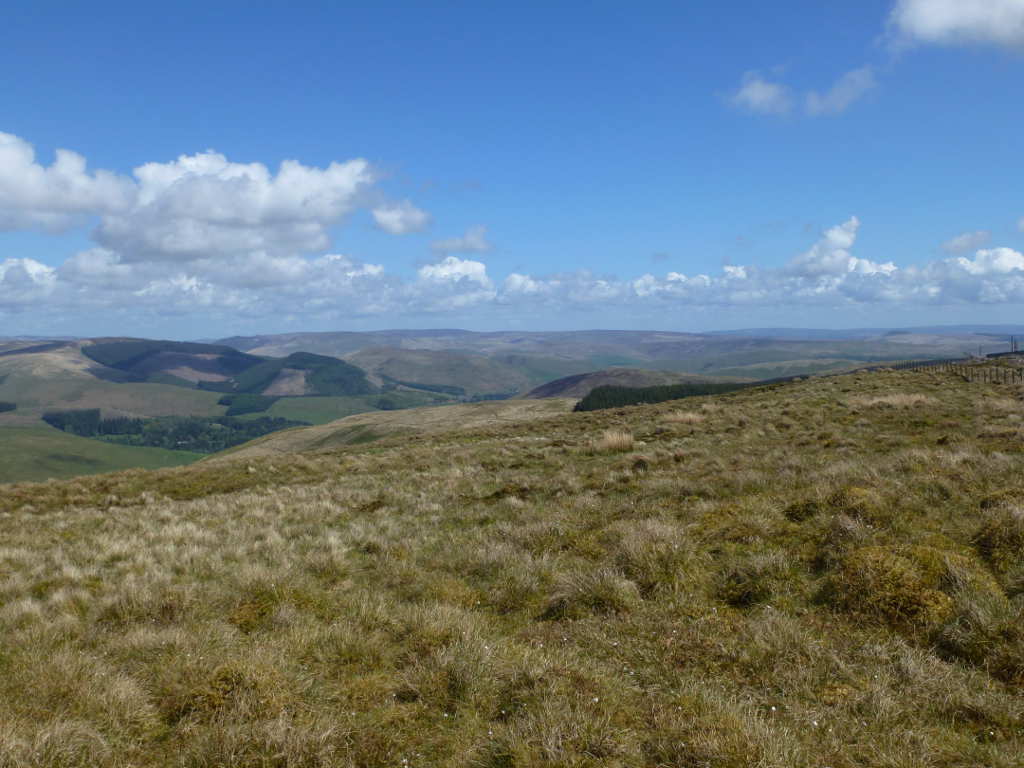 Activation was 60m SSB followed by 40m SSB then 40m CW. Significantly fewer chasers on 60m than earlier but more on 40m SSB. ODX was RU3SD on 40m CW. During the activation it was sunny and warm apart from when the sun went behind a cloud. As the activation progressed I noticed there were more cloudy periods than sunny ones and on checking the sky was now about 15% blue and 85% dirty grey. Rain wasn’t predicted so at the first quiet spell I packed up and got down as quick as I could. It took about 1hr30 to the top and 45mins to get back to the car.

Calkin Rig summit is in the fire break in the forest on the top of the distant ground to the left of the twin trees. 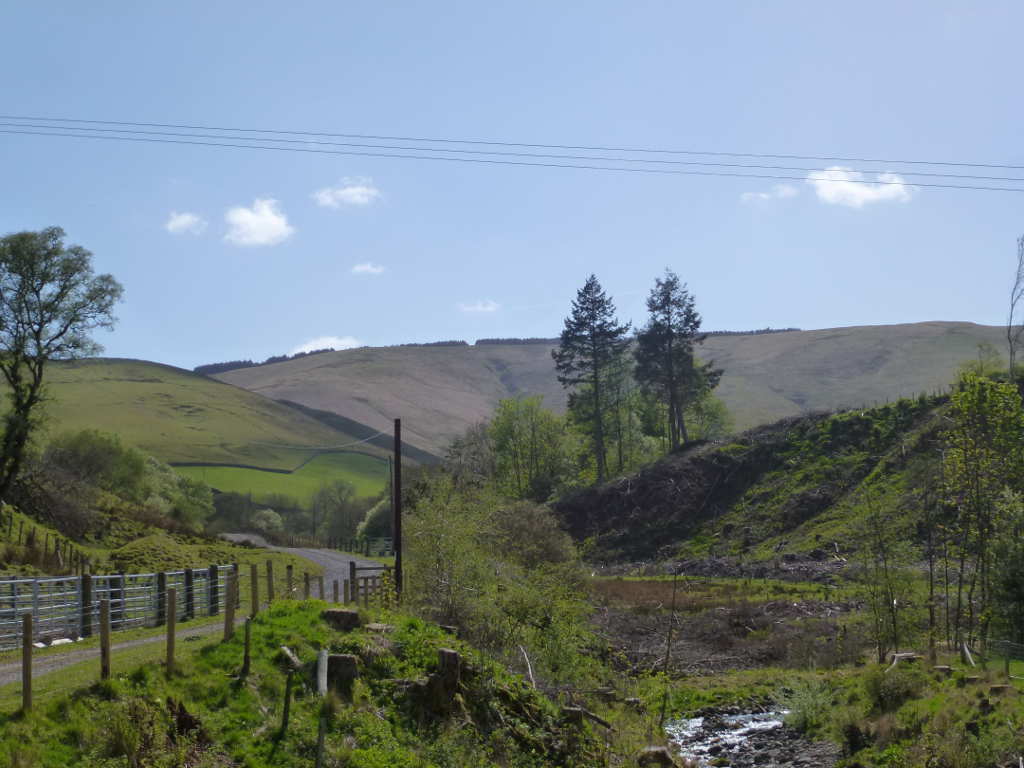 Having packed up I had 3 routes home. Back 15miles or so to Lockerbie (where PanAm 103 came down) and the motorway home. Or back to Langholm and the dreary A7 to Melrose and back across the Cashmere towns to home. Or the route up Eskdale. I’d only ever been as far as Deephope near Law Kneis SS-168 on this road and that was 8 years ago. So I thought I take the bendy and scenic route that is single track for 35-40% past the golden teapot and the BGS Observatory.

The golden teapot is the Samye Ling Tibetan Centre and Buddhist Monastery. The BGS Observatory is home to the Magnetometer. The kid in me thought it would be great fun to set up a portable CT scanner in the Monastery car park. The BGS guys would think the sun was going Supernova and the monks would sense a huge disturbance in the force. Well I may be in my fifties but I’m still a 10 year old kid inside! As it was I met a monk hitching on the trip to Samye Ling. If it’s not safe to give a Buddhist monk a lift then Satan’s work is complete. What a thoroughly nice chap and as soon as he sat in the car I felt calm and relaxed. You can sneer but for once I was chillaxed. Anyway, Lundrup told me to call in at the Monastery and walk around a statue 3 times for a blessed life and all my future lives would be blessed too. I did. I am now blessed. I still had an email inbox bursting at work today and the chillax has evaporated.

Anyway, sitting in the centre on a warm and sunny afternoon listening to birdsong was very relaxing. I spent a good 30mins not doing anything. Then I drove back up the windy road like a man possessed. Well you have to balance the Yin and Yang and so the Yin of tranquility was balanced by the Yang of finding the adhession limits of Continental SportContact 3 tyres

They have more grip than I have nerve. 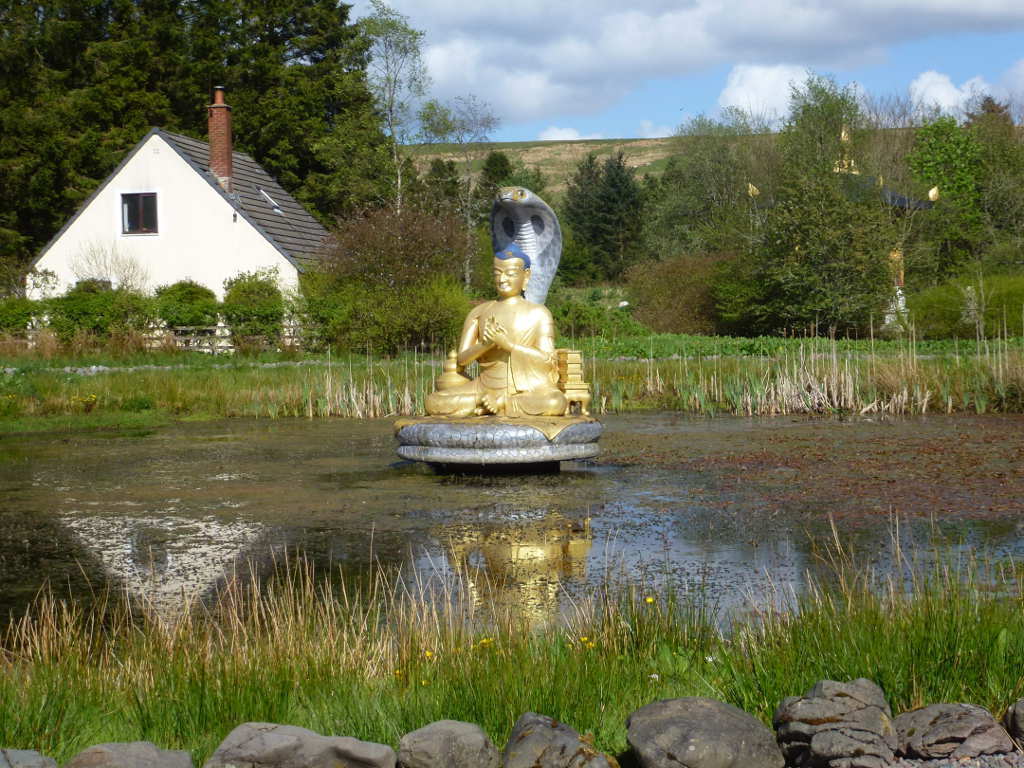 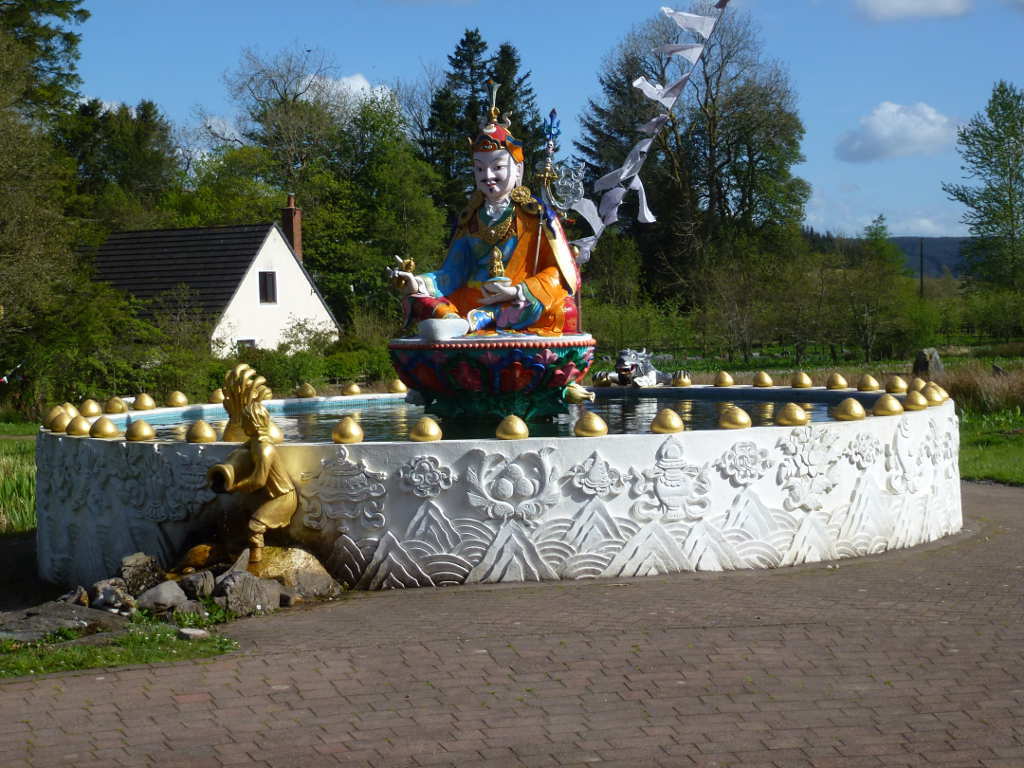 I think that means I have 14 SS summits left to do now.

I don’t believe a word of it… you can’t have been in Scotland… the sun was out.