On 5-NOV-2017 I activated Windy Hill (why isn’t this an SI?), on Isle of Bute. All the time I was on Bute, as much as it was a nice family break, I was looking longingly at Goat Fell on the Isle of Arran, thinking - that’s where I really want to be!

Forward on 18 months and my wish finally came true. A rare combination of fortuitous events saw Alex and I without both children for a few days and I seized the opportunity to book three days on the Isle of Arran.

Apologies to whoever took notice of my initial post for Wednesday. The mountain was shrouded in cloud when we arrived and other events took over my attention until it was too late to update the post.

We spent a nice day touring the South of the Island taking in views of Holy Island (another SOTA possibility) and the amazing looking Aisla Craig situated between Arran and the mainland. 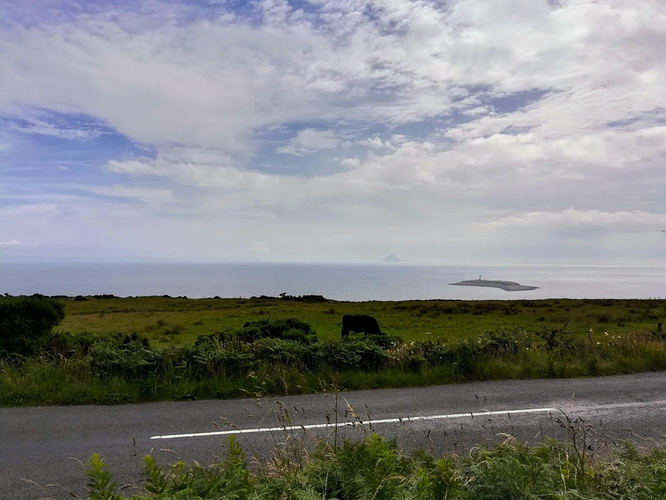 Wednesday evening the weather forecast seem to point to Thursday being the best day (although it was pretty inaccurate for our entire stay!). We stayed at Hunters Guest House in Brodick, which is right on the front with commanding views of Goat Fell. 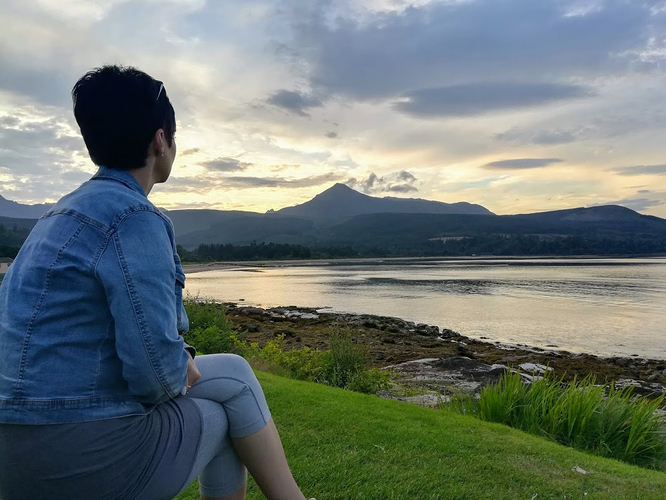 So with a full breakfast inside us on Thursday morning we set off on the ‘tourist route’ to Goat Fell from the Brewery which is 1.5km North out of Brodick - it would be an easy walk to the start from Brodick. We drove not knowing what state we would be at the end! The route is very well documented on the walkhighlands site but to be honest the sign-posting is excellent and you would be hard pressed, even in poor visibility, to find a different way up. 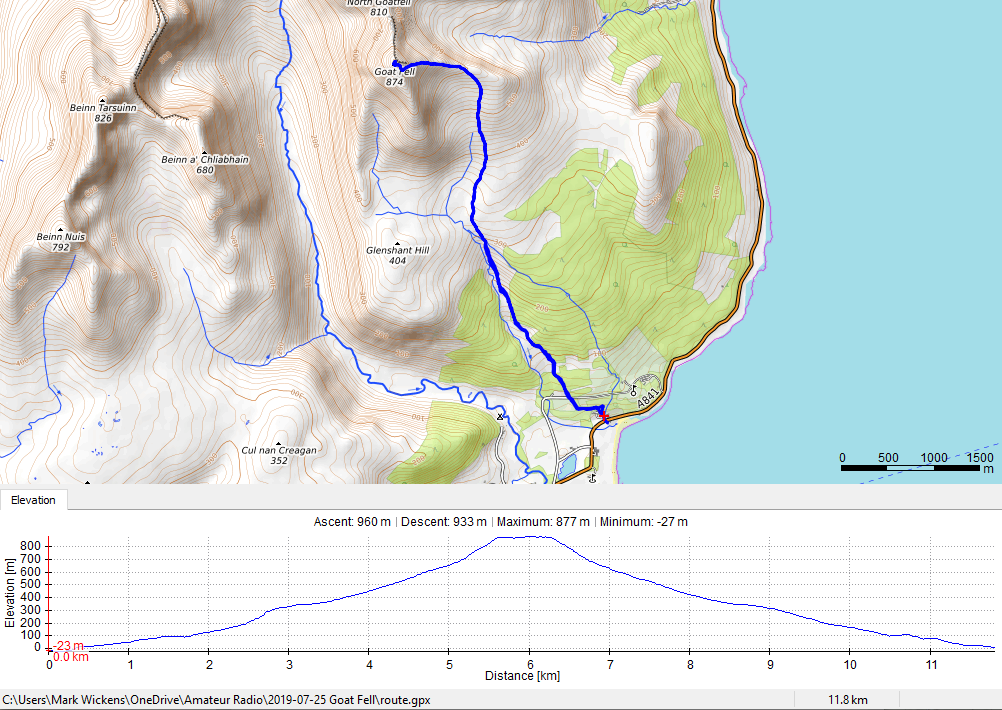 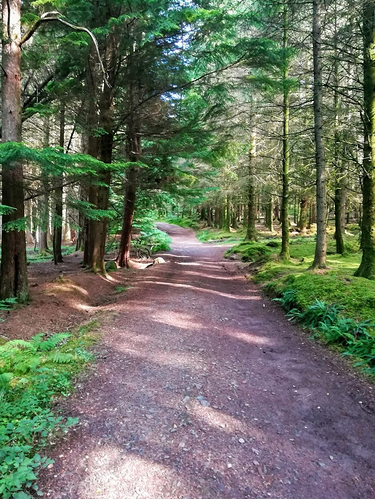 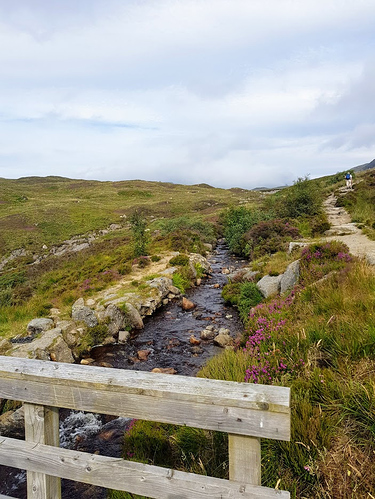 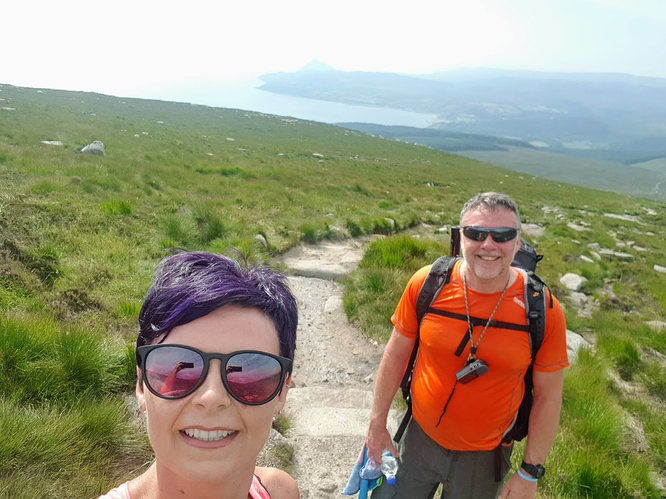 The path opens out from the woods on to grassland and meanders at a fairly easy pace towards the summit, only getting harder towards the end when you are more staircase than walk. With good visibility the summit is obvious, and a good target. Both Alex and I found the walk easier than the 870m ascent would initially let on. 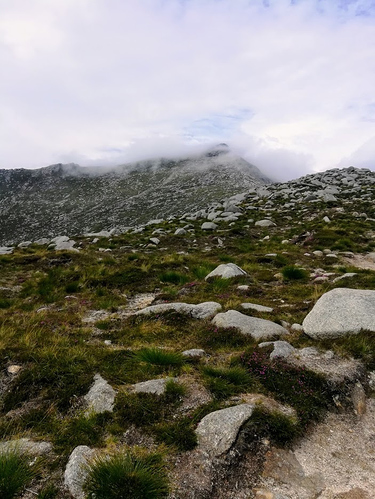 As it happens as we arrived at the top the remaining cloud lifted and, yes, I felt very very privileged to have my 3 day holiday coincide with perfect conditions. There was a good breeze (which Alex was thankful for as it kept the horse flies at bay) but nothing unmanageable. 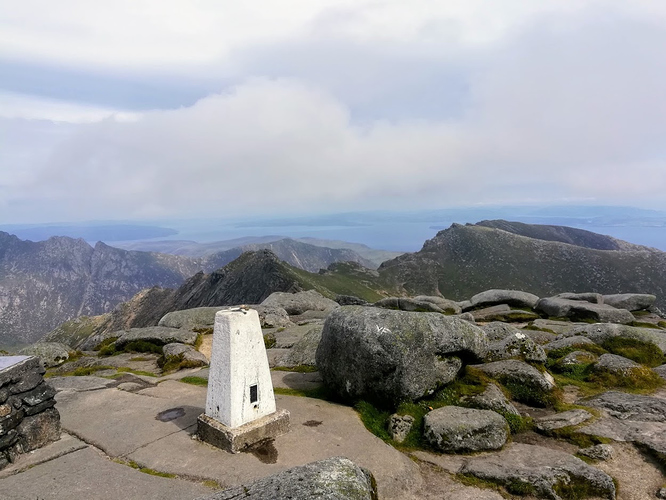 The views are stunning. Visibility wasn’t clear enough that Ireland could be seen but the Mull of Kintyre is very close, as is Bute and views are good to the mainland.

The activation started with 2m with a nice few contacts into mainland Scotland and one contact into Northern Ireland:

Setup of HF was a little tricky with the Sotabeam Quad Bander being a full half-wave on 80m and only on a Decathalon 6m lightweight mast.

I managed to find a position to the North East of the trig point that was reasonably flat, but as I was to find, 80m wasn’t really working for me with the KX3 on 10 watts with the 80m part of the antenna lying on rock in places due to the slope of the summit. 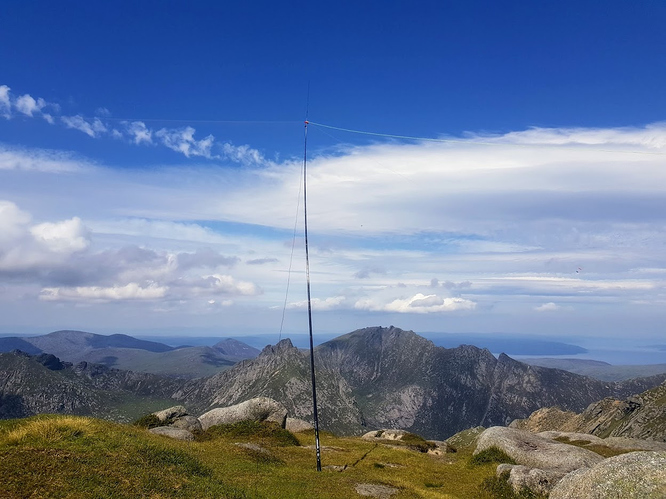 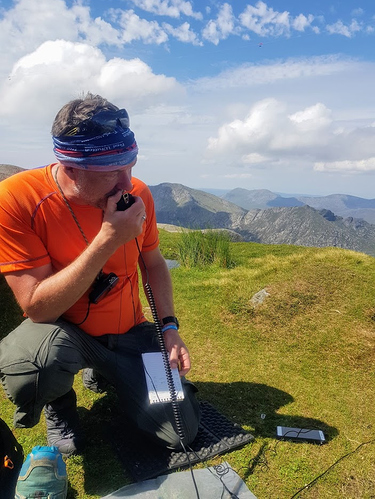 HF started with 40m and a good run of contacts before 20m which also proved good (and amazingly quiet with less than S1 noise!)

As mentioned 80m only produced one contact with EI3GYB who reported my signal varying between S1 and S7 - probably due to the antenna’s proximity to the rocks. 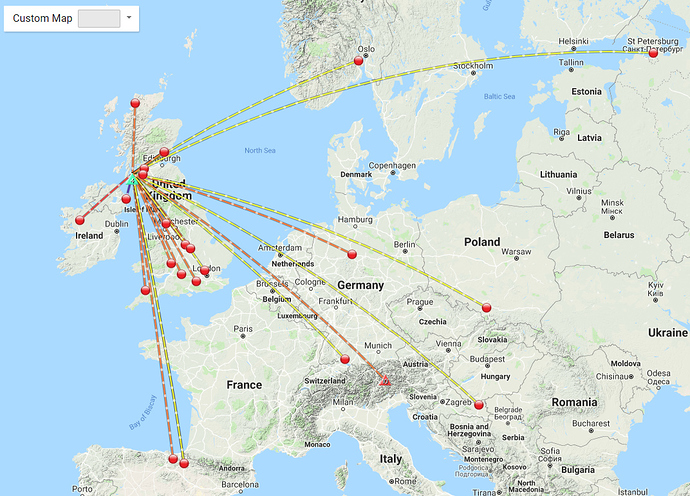 We spent just under two hours on the summit in total - obviously as well as radio just trying to Grok the magnificence of the location and our amazing fortune to be able to climb it on this day. 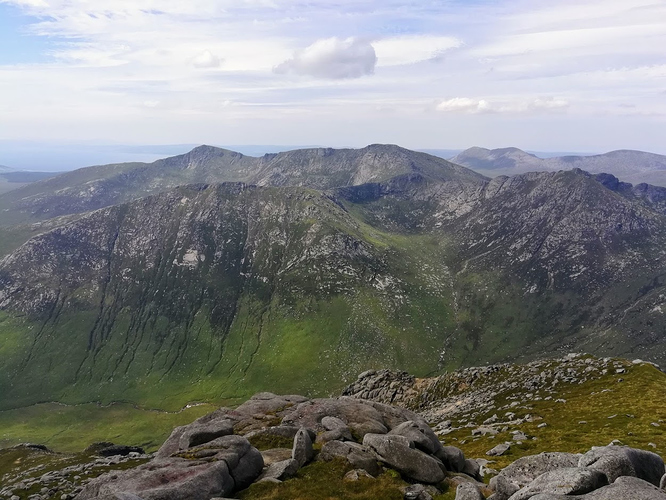 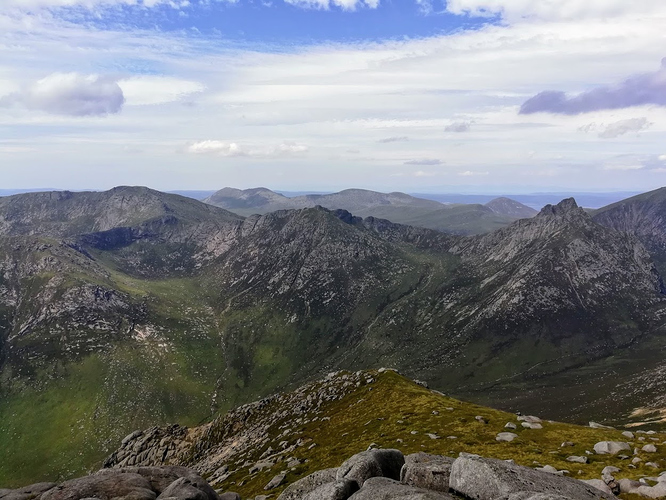 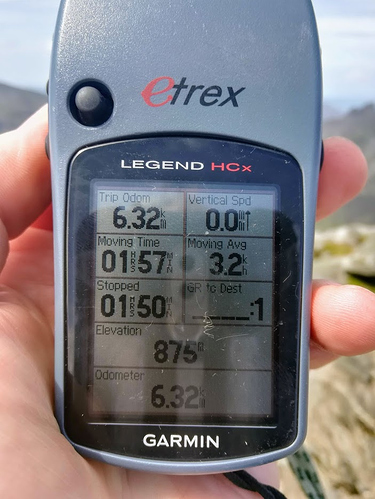 The descent was uneventful - apart from the amazing views towards Brodick and Holy Island - and with the wind picking up we did the right thing getting out straight after breakfast. 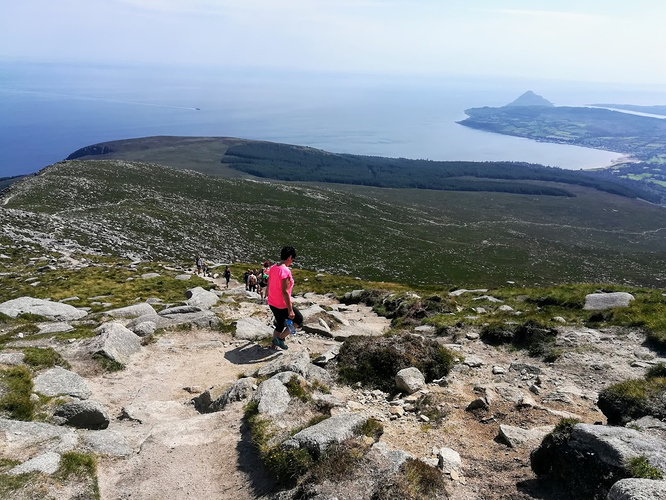 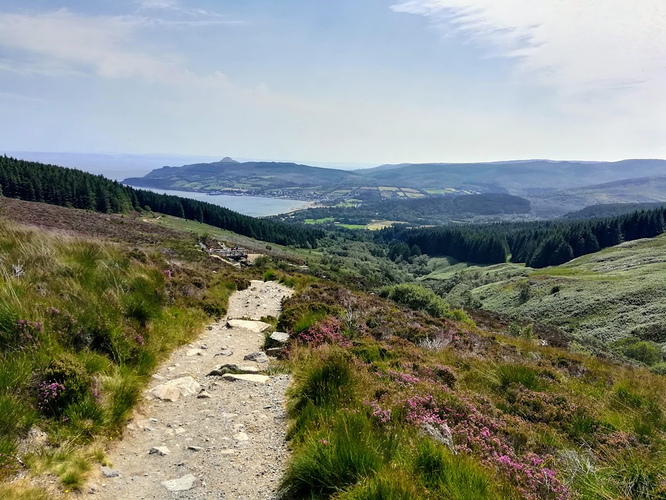 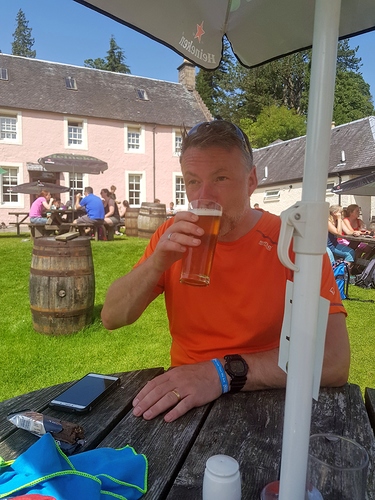 I enjoyed a well-deserved couple of pints at the Brewery in the baking sun. We sat and ate our picnic tea on the front outside the Guest House. Today we headed to the West Coast, took a walk to the Machrie Moor stone circles, saw seals basking in the sun, watched the Mull Ferry for a bit and generally had a relaxing day.

Our alternative plan of activating the summit on Holy Island would have probably been a very blustery affair. We can save that and other summits for a return trip.

Many thanks to all who chased. All the photos here.

Thanks for the report and pictures, brings back memories of when we did it a few years ago. We did walk directly from Broddick and it is a lovely walk on a nice day. The weather was less good the rest of the week we were there so we need to go back to do more of the hills.

Well done, you lucky things! We never got a chance for Goat Fell in our 5 days on the island 3 years ago but we snatched Holy Island (the ferry is erratic and only turned up to take us off as an islander had a GP appt which she may have missed as the ferry was very late!) which was wonderful. I also walked to the Machrie Moor stone circles in the rain, while Rodney preferred to stay dry, and found them magical - possibly helped by the mist and low cloud. We managed about 3 other summits but Arran is on MY list to go back… as that peak is still waiting for me!
73 Viki M6BWA

Goat Fell is in my “Hills I nearly Climbed” book after a fail last Easter. As we were climbing some of the other people were carrying Ice Axes, and when we got to about 2500 ft it became obvious that they were not just for show…, so a fail but it is on the list! It looks absolutly brillant - well done

My other good fail - pre sota was Creag Meagiadh which breifly became Creag Megadeath with an awful lot of snow which didn’t appear to be very attached to the mountain. Swift and safe retreat!

Well done and a great report. Can you please let me know what software or app did you use to mark the QSO’s on the map?
73 Paul M0PLA

to mark the QSO’s on the map

Hi Paul,
You can do that with the great SMP. 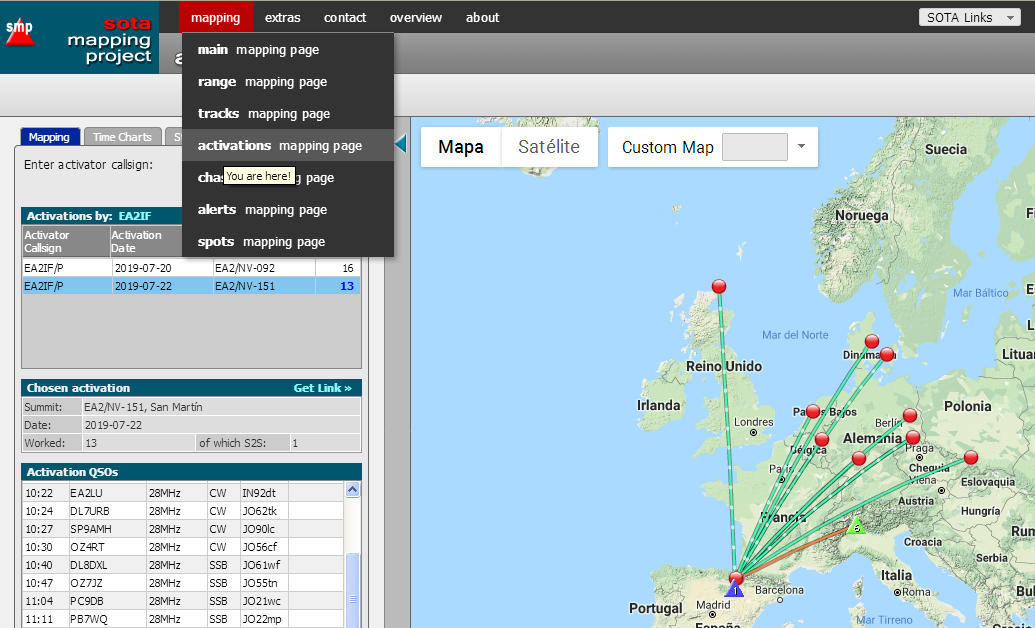 Yes, it is an amazing piece of software!

Thanks Mark,
Looks like a great day out if a bit warm lower down perhaps. Your photos showed Arran off very well and you made me want to go. There aren’t many GM islands I haven’t been to but that’s one of them. There are quite a few WW2 aircraft wreck sites on there including Goat Fell, that I’d love to visit.

40 and 20 seemed as if they reached most chasers but well done for dropping to 80 to pick up Michael. I’m surprised there weren’t a few more on there but it proves that, unusually for this part of the cycle, the skip on 40m was short enough to satisfy most 'G’s.

PS: Thanks again for your work on the WOTA site. I found some more QSO’s to upload this evening.