The morning was pleasant with some sun and fluffy clouds. We didn’t managed to get out as early as hoped – our target was in Strathfarrar, which has limited access with only 25 cars a day in starting at 9am. It was about a quarter to 10 as we drew up outside the gatekeeper’s cottage – we were in luck – a permit was issued, we were warned about the potholes, to be out by 8pm and we were through the gate.

The road was interesting! Some areas had a reasonable surface, and in places it was possible to get up to the maximum of 30mph, but there were areas with extensive potholes where low gear and attempts (not always successful) at careful wheel placement were needed, and a couple of places where the road surface seemed to degenerate into rough gravel. There were thankfully a good number of passing places, though we were surprised to go round one corner to find a large lorry coming the other way – not too far to reverse to let him through. On the other hand we didn’t want to go too fast, as the views were stunning, and we had some brief stops to just take them in and grab some photos. There were also a reasonable number of parking places. 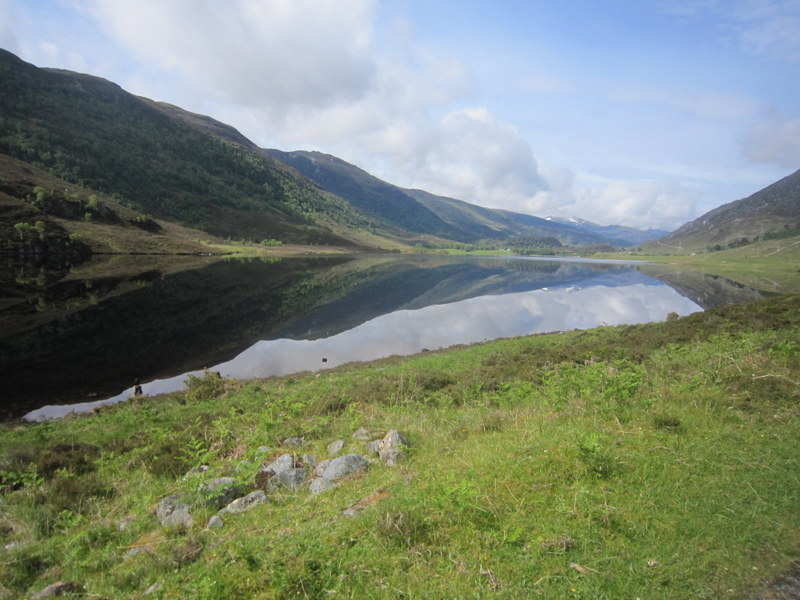 We parked up on the wide verge at the track junction at NH224392 in bright sunshine. The first day we started walking in shirtsleeves and sunhats! Our target was the previously unactivated GM/WS-226 Beinn na Muice 693m, which was clearly visible from where we had parked. It looked steep on the map, but from below the east ridge looked to be a reasonable gradient. We started off on the track heading north east along the valley, with repeated photo stops. We followed this until it flattened out above some waterfalls, near the eastern edge of the ridge. It didn’t look so easy from there, but we couldn’t see any obvious alternative. 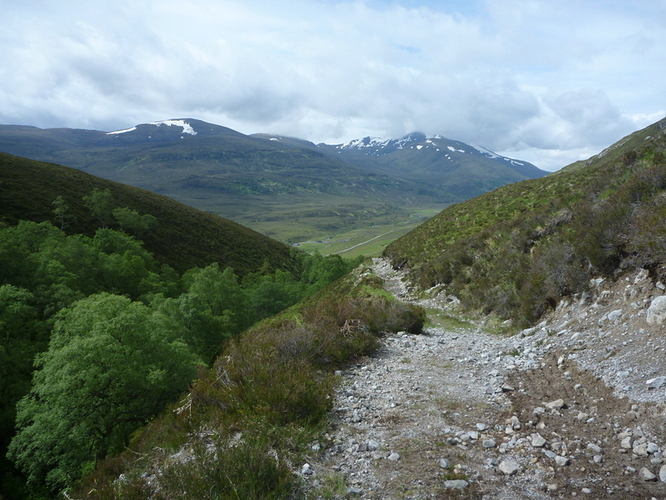 First we had a slightly boggy flattish area to cover, but then it became increasingly steep. There was no path, and it was a matter of trying to pick away upwards through tussocks, heather and some rocks. It got steeper, and there were points where we were heaving ourselves up on hands and knees, sometimes pulling ourselves up precariously on chunks of heather. At one point Caroline couldn’t see where to go next, but looking back down decided that she couldn’t go back down that way. Martyn took the lead, and while trying to work out how to get round a particularly awkward bit, noticed an Ortlieb map case like we use lying in the heather. He initially thought Caroline had dropped it but then remembered she was behind him. It was almost re-assuring to find it, as it convinced us that someone else must have been this mad way before us! We decided to pick it up and de-litter the hill, and continued on the scary ascent. Eventually we got to the top of the really steep bit, and the gradient eased – still steep, but now it was mostly a matter of picking our way between the rocky outcrops and boggy areas. 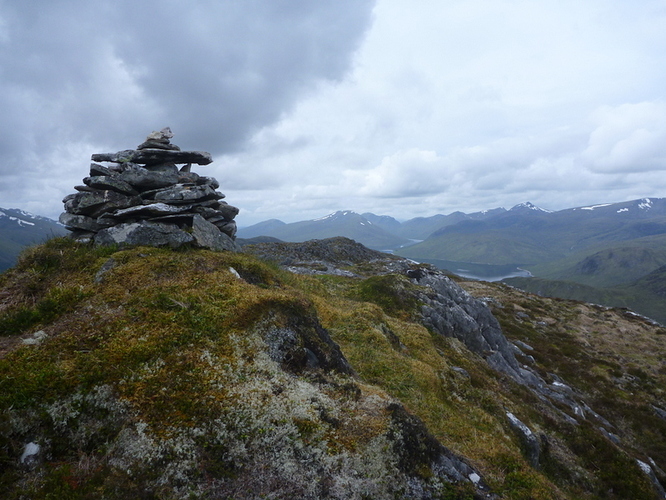 The small summit cairn finally came into view, and views were superb in all directions. Some of the Munros to the west still had cloud tops, but visibility was generally good when we arrived, though it clouded over a bit later. Caroline set up the VHF station near the summit cairn, supporting the antenna by just pushing the pole into deep vegetation next to a rock, while Martyn set up a little lower for HF. Caroline didn’t expect to do well on VHF here, but her initial call was answered by Ray GM3PIL, who worked her on all the summits done from our Contin base, but that was all. Martyn struggled on 5MHz, having used the InReach to self-spot, getting 4 contacts, a 5th giving up after a lot of trying. With Martyn at least qualified, Caroline moved onto 7MHz, where conditions were also poor – a self spot from the InReach yielding just 9 contacts. After a lot more calling CQ Caroline went in search of other stations, adding a 10th contact from a special event station. We had originally planned to also do GM/WS-332 Meall Innis an Loichel, but the slow ascent, and the poor radio conditions caused us to decide that we didn’t have time. So Martyn then tried 14MHz, but despite a lot of calling got zero contacts – it later transpired that the self spot from the InReach had been delayed until we were long gone. 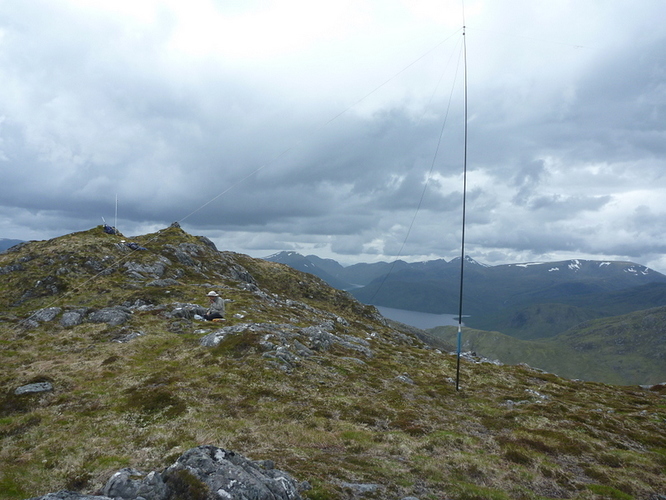 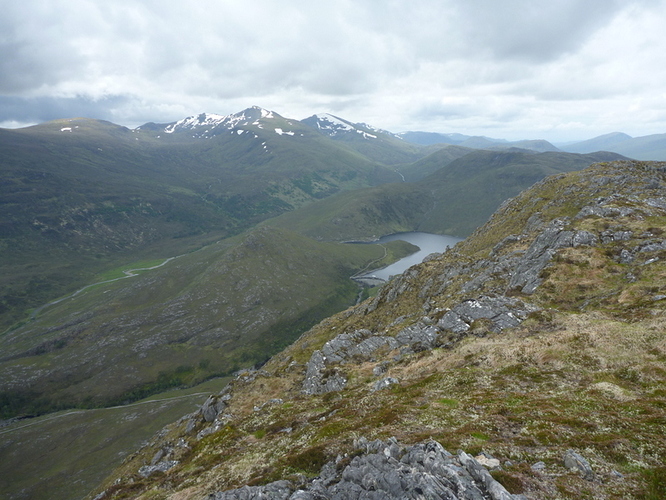 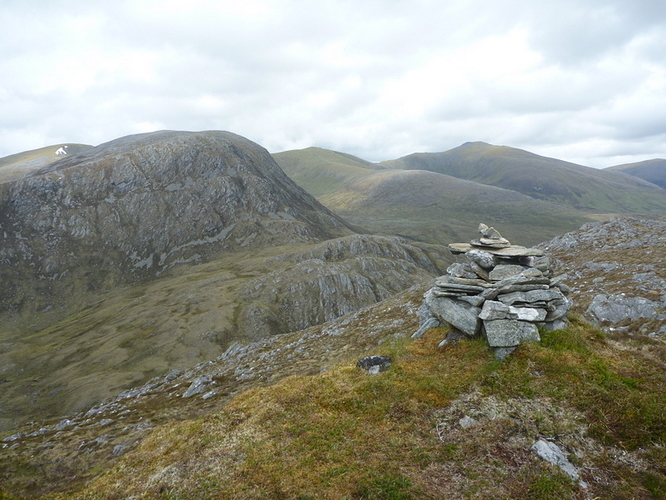 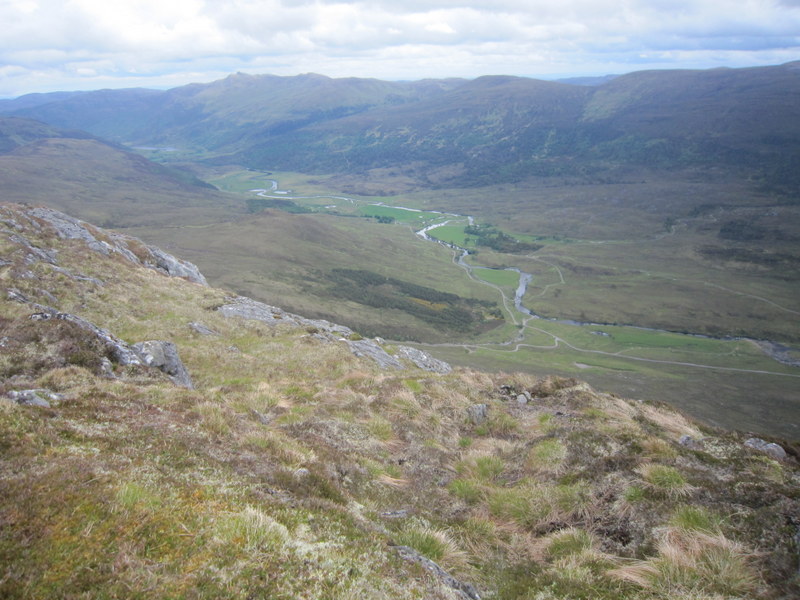 How were we going to get off the hill? It looked steep in all directions, but west and north looked best. We headed along the ridge west, keeping to the north of the rocky outcrops along the ridge, and bent north away from the ridge where a stream seemed to provide a gentler angle. Unfortunately some light rain came over so we had to stop to put on waterproofs, though thankfully it didn’t last too long. It was still steep, and boggy, and as we descended we spent some time following a frog which seemed to have a liking for the next tussock we wanted to step on. Where the gradient eased we started contouring round the hill aiming for Monar Lodge, picking our way over the rough and boggy ground to pick up the estate road just south of the Lodge. By now the rain had stopped but clouds had come down on the hills to the west - we still had good local views. We followed the road round to the dam, looking longingly at Meall Innis an Loichel but deciding we really didn’t have time to do it!

We were later told by a neighbour of ours, who happened to have worked on the dam a number of years ago, that it is one of only two Arch dams in the UK. After looking around the dam we headed downstream, finding a nice spot above the river to stop and eat afternoon apples, before following the road back to the car, passing a large herd of deer in the valley below. Another set of walkers were just leaving in their car as we got back, but we reckoned we had time to explore a little further in the car before having to exit the valley, so drove round to the Loichel Dam and spied out the parking for Meall Innis an Loichel – perhaps another time – Strathfarrar is well worth another visit! We passed just one other parked car as we drove back out. There was one moment of concern when after negotiating some potholes a nasty noise started coming from the rear inside wheel – you do not want a puncture down Strathfarrar! Stopping in the next passing place, Martyn successfully removed a substantial stick from between the rear wheel and body, with no other damage – phew! We were back out well before 8pm, and back at the cottage by then. A hard but good day in terms of walk and views – unfortunately the radio conditions wasn’t so good.

For anyone thinking of doing this one, then I’d suggest parking near the Monar Dam and approaching from the west. The west ridge is probably a better route than our descent one - the rocks we dropped down to avoid were probably negotiable and it would probably have been a shorter route with a steadier gradient.

For anyone thinking of doing this one, then I’d suggest parking near the Monar Dam and approaching from the west.

Many thanks for this tip. This summit was the one that we couldn’t fit into our schedule last year. I think our planned ascent was much as yours which looks to be sensible on the map. Paul and I also had it planned with GM/WS-332 (Meall Innis an Loichel), but we discovered Strathfarrar is only open half a day on a Wednesday so had to substitute GM/WS-304 (Carn a’Bhodaich) instead. Had we had an extra day or two, then we could have re-scheduled. There are so many summits to activate when based in the Inverness area, you just don’t know which ones to do!

Strathfarrar is well worth another visit!

Psst… edit that out of your report or we will have every Tom, Dick and Harry SOTA Axtivator going up there.

Strathfarrar is well worth another visit!

Psst… edit that out of your report or we will have every Tom, Dick and Harry SOTA Axtivator going up there.

OTOH, if someone else goes up there I might stand some chance of getting a complete, though with the way the bands have been recently and the high noise levels at home, I probably wouldn’t hear them