The forecast was for the hottest day of the week. After yesterday’s exertions we wanted something easier, and we wanted to be back at the cottage in time to be able to get fish and chips from the Ballachulish chippy. Our target was the Corbett Beinn a’Chrulaiste at 857m, but with the advantage of starting from the Kings House Hotel at around 240m, leaving only just over 600m ascent.

As we parked up in the car park in front of the hotel there was a red deer stag wandering round the car park, unperturbed by the people: we were so surprised we forgot to take a photo! When we opened the car door, we realised that although it was hot there was a pleasant breeze which was taking the edge off the heat. Despite this we decided to load up even more water, contriving to have 4.75 litres between us as well as our usual selection of fruit juices. We headed north on the tarmacked former road that forms part of the West Highland Way, but where it met the public road and turned left, we turned right through a gate onto a track. We crossed a bridge over the Allt a’Bhalaich and left the track for a faint and sometimes intermittent path running along the east side of the stream. The gently breeze was a blessing as we followed the attractive steam up into Coire Bhalach. We noted someone else walking up a track a little way the other side of the stream: that might be a return route, though it looked less interesting than the stream with its selection of wildflowers and dragonflies darting. 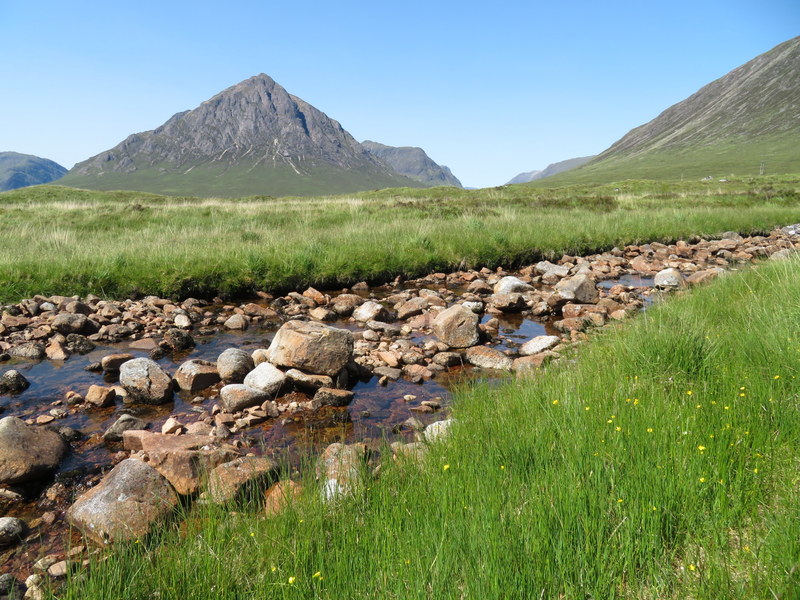 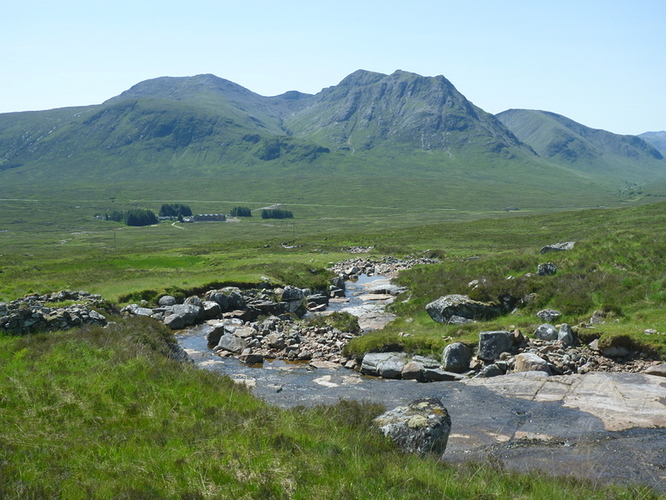 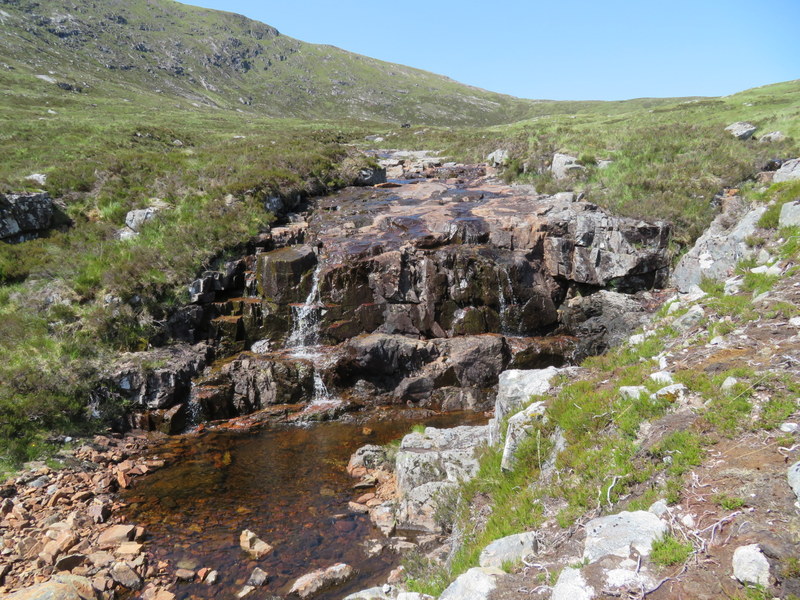 The path largely disappeared in the higher reaches, and we tried crossing the stream and ascending to the ridge rather than going all the way to col. It was steep and given the heat the col would probably have been a better bet! Once on the northern ridge of Beinn a’Chrulaiste fine views opened to the north with the expanse of the Blackwater Reservoir coming into views. For the third day running Ben Nevis was visible in the distance under a cloudless sky: it must be rare for Ben Nevis to be out of the clouds for three days in a row! As we continued up the ridge the views opened up down Glencoe. The trig point is yet another “Vanessa”: they seem quite common in this part of Scotland. 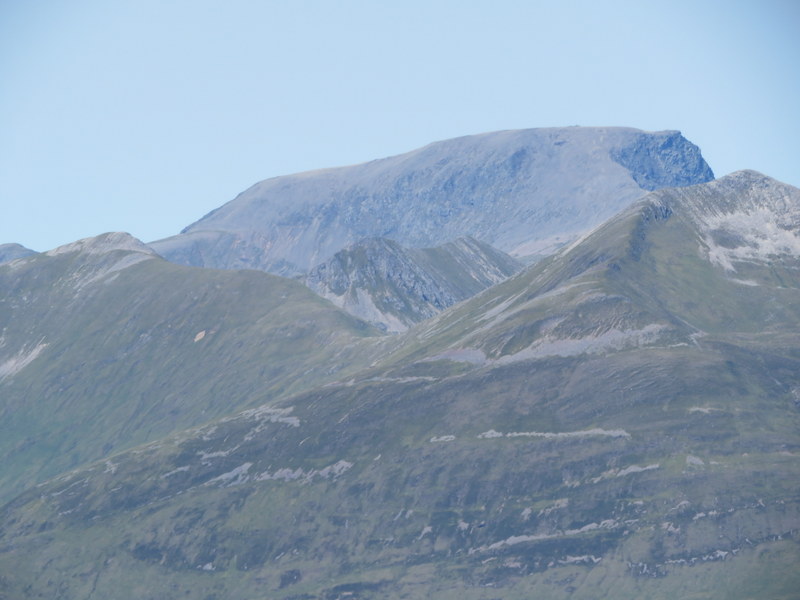 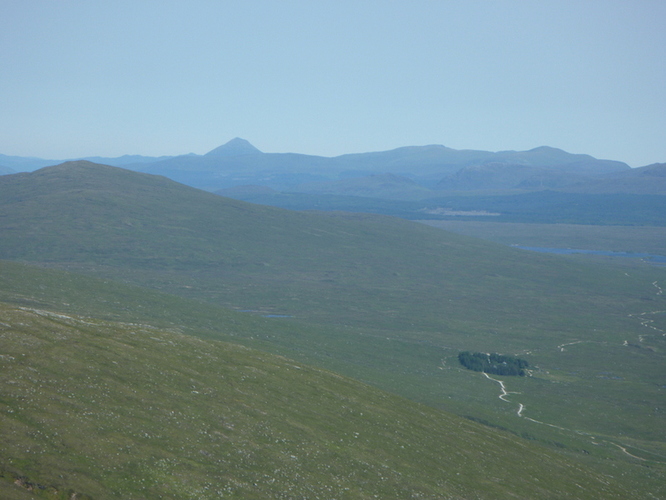 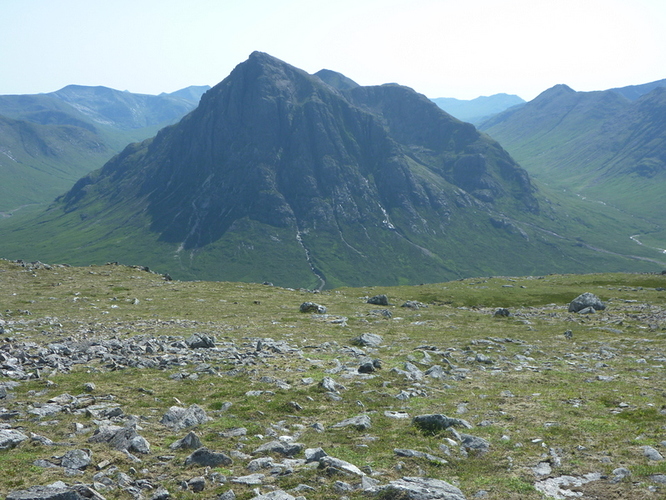 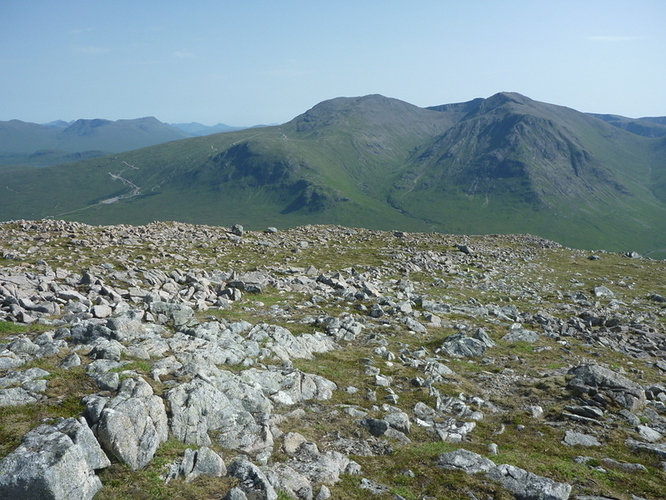 Caroline used the hole in the trig point to support the MFD, but her initial calls yielded just one contact: Robin GM7PKT who had escaped work early. Martyn set up HF on the gently sloping ground to the west of the trig point and managed to get 4 contacts on 5MHz in 15 minutes to qualify the hill, but that was all. We then noticed that Steve G1INK was on 40m another German summit, so a change of HF band as we both had the S2S. Caroline then took over 40m with a good run of another 16 contacts. Having a shorter walk meant we had time to try 20m, which yielded only 4 contacts for Martyn, but one of them was an S2S for both of us. As Caroline was making final calls on 2m FM a second VHF contact was made with Terry G(M)0VWP who was mobile near Loch Lomond on his way to Fort William for SOTA. 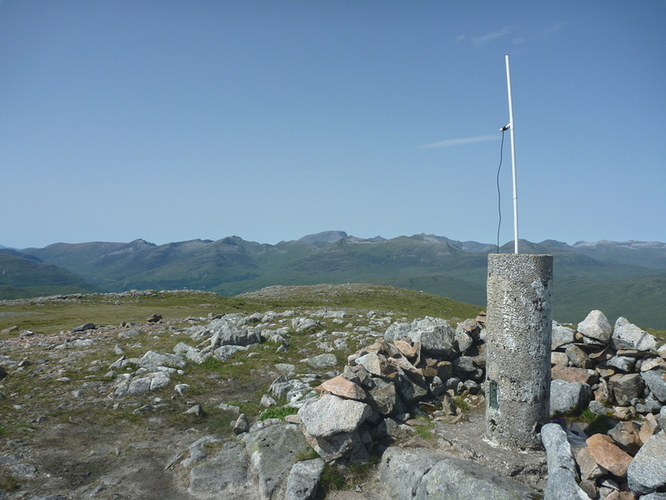 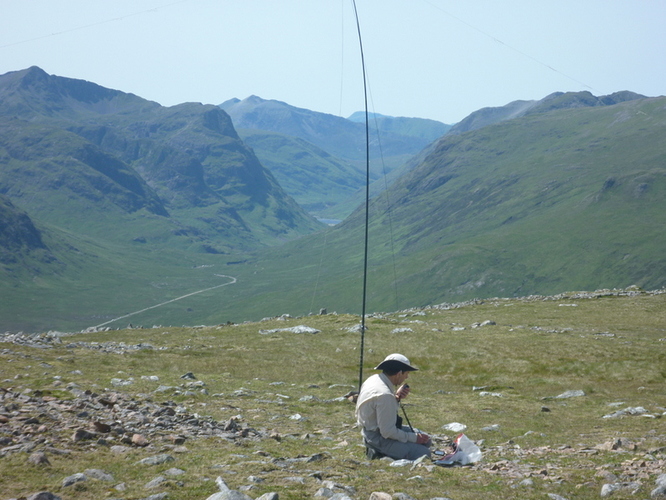 One possible return was a circular walk by heading down the west ridge over Stob Beinn a’Chrulaiste and down to pick up the return along West Highland Way in the valley. This would have probably yielded even better views of Glencoe, but a hot valley return along a busy path didn’t appeal, so we returned down the north ridge, this time going down to the col before descending into the Coire. We located the top of the ATV track and followed it down the west side of the stream. It was a faster descent, but not as attractive as being right by the stream, and despite the recent dry weather was very wet and boggy in places. It was much hotter when we got back to the car, and even hotter when we got back to Ballachulish.

It wasn’t really the weather for fish and chips, but the Ballachulish chippy was just across the road from the cottage and delivered a tasty meal. 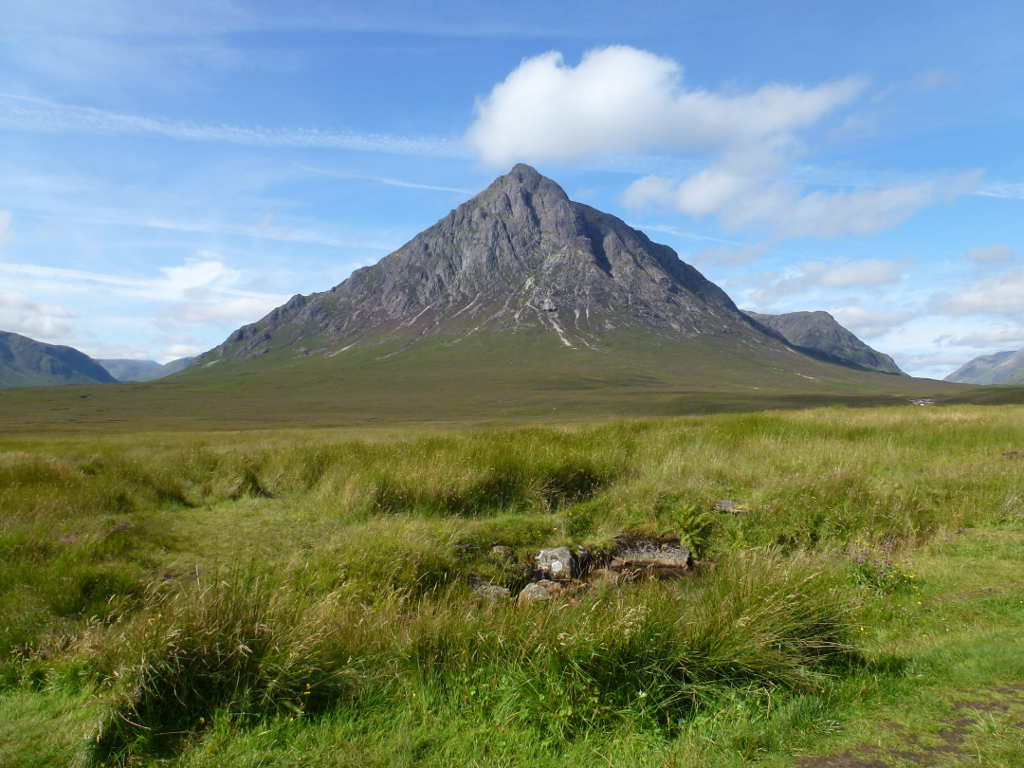 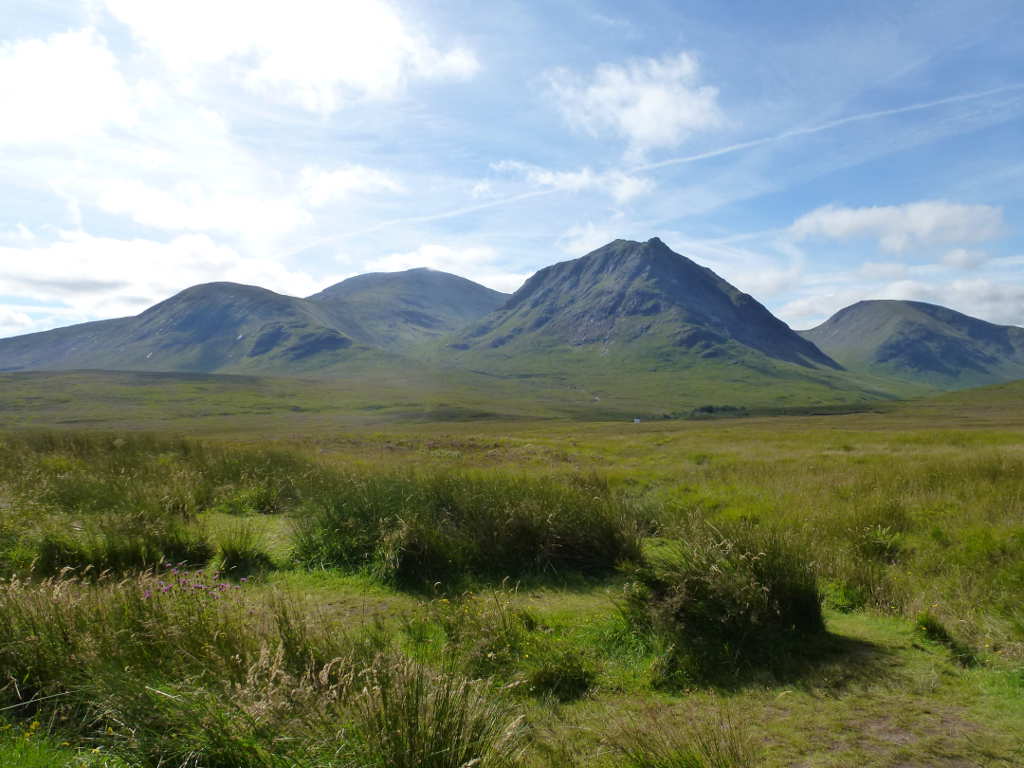 Lovely pictures, Caroline. Its strange, but though I know I have done this summit (there’s a tick on an old map!) no memories remain and even your photos don’t spark any memories - probably wiped out by a good night in the Clachaig Inn! Its news to me that Ballachulish has acquired a chippy, we used to stay in the Red Squirrell Bunkhouse or the hut in North Ballachulish (before it was tarted up!) and if we fancied chips went up to Fort Bill, where they did lovely black pudding and chips.

The classic view, which has graced so many calendars and post cards, I have it in my collection, too. The black line below the pointed summit is the Crowberry Gully, scene of many a winter epic - I was avalanched out of it once!

Lovely pictures, Caroline. Its strange, but though I know I have done this summit (there’s a tick on an old map!) no memories remain and even your photos don’t spark any memories - probably wiped out by a good night in the Clachaig Inn! Its news to me that Ballachulish has acquired a chippy, we used to stay in the Red Squirrell Bunkhouse or the hut in North Ballachulish (before it was tarted up!) and if we fancied chips went up to Fort Bill, where they did lovely black pudding and chips.

I forgot to add photos of Blackwater reservoir so here’s a couple to see if that jogs any memories. It’s too long to get it all in one photo! 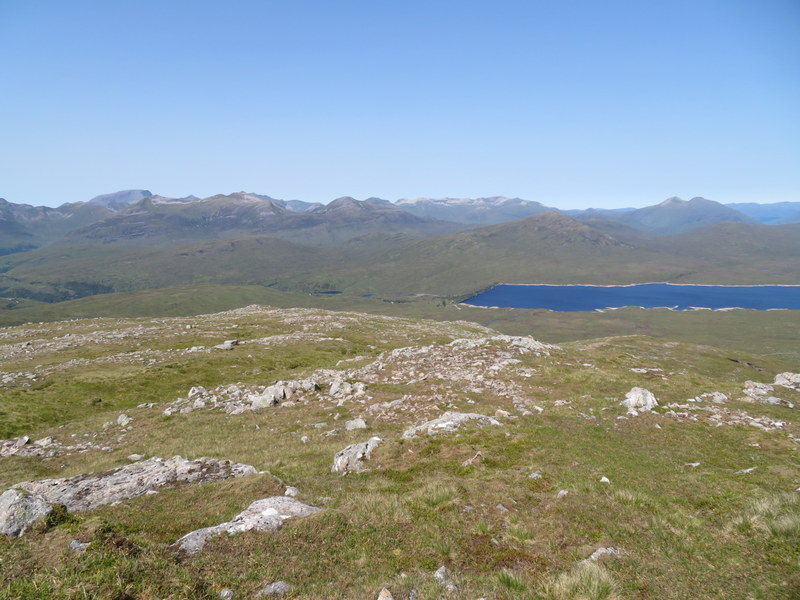 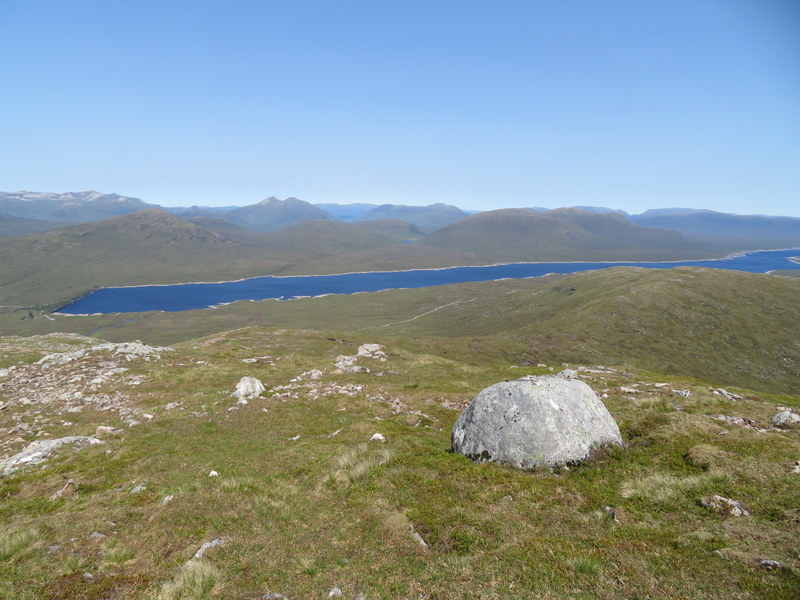 The Ballachulish chippy is relatively new: it wasn’t there on our previous visit to that area. It’s only open Fridays and Saturdays, so I’m not sure how it manages to stay in business at only two days a week. I think it’s where the Co-op used to be: the Co-op is now in a purpose built shop with car park just off the A82.