The forecast was for an even hotter day, so we wanted to aim for height again, but had done the only hill with mechanical assistance to get part way up. By now we had concluded that despite looking very attractive and being a potential complete for us, Buachaille Etive Mor is beyond our capabilities. We next contemplated Am Bodach another potential complete for us but ruled it out as too much steep climbing. Instead we decided to go for Beinn Fhionnlaidh, which was also a complete for us. This hill has only previously been activated by Robin GM7PKT (5 times) and we used his recommended route from Glen Creran, which is a relatively gently descent, but with that comes the penalty of a long walk in. The alternative is a steeper ascent from Glen Etive.

There were a few midges about when we parked under the trees in the forestry parking at the end of single-track section of the Glen Creran. We applied both sun cream and smidge before we set off. We also loaded up with as much liquid as we thought we could carry: 4 litres of water and 1 litre in fruit juice between us and headed out of the trees and into the bright sun. The start of the walk was on the estate road towards Glenure, crossing a couple of bridges in the valley bottom. On the approach to Glenure we took the left track towards a gate in a fence, signed Beinn Fhionnlaidh left and Beinn Sgurlaird right. So left it was on a rough track that had been churned by recent forestry work: we could see a cleared area to the north, but we turned off the forestry track before reaching it to ascend a track through trees which offered a brief respite from the sun. All too soon we were out in the sun crossing a ford and starting on the ascent proper.

There was a bit of a path heading away from the ford, but we soon realised that it wasn’t ascending as fast as we hoped, so we started ascending pathless to try to find the ridge line. We found a ridge to follow, and occasionally found a path, but then lost it and then found it. We could see a summit ahead, but it was just the first of many false summits on this hill. We needed many stops for water and to take in the views back down Glen Creran and towards Beinn Sgurlaird: it was looking attractive, but we had discounted it as it looked as though some scrambling would be involved! 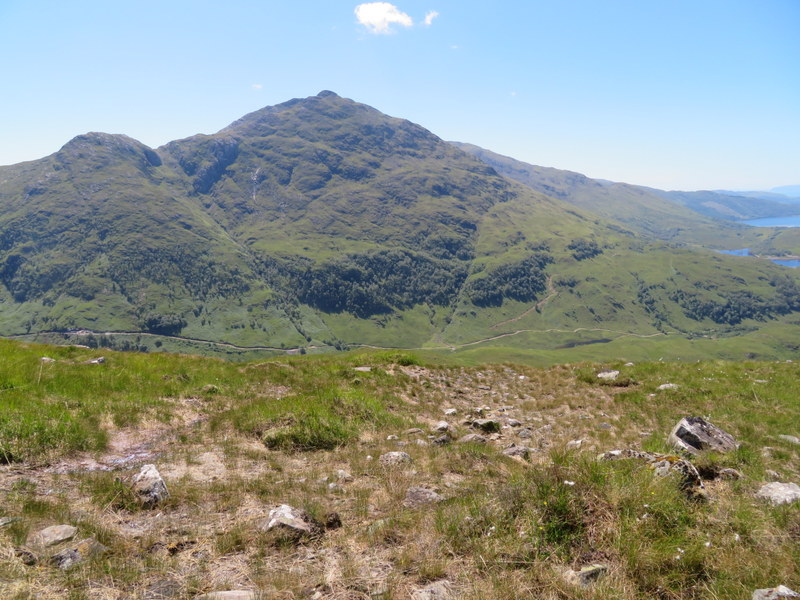 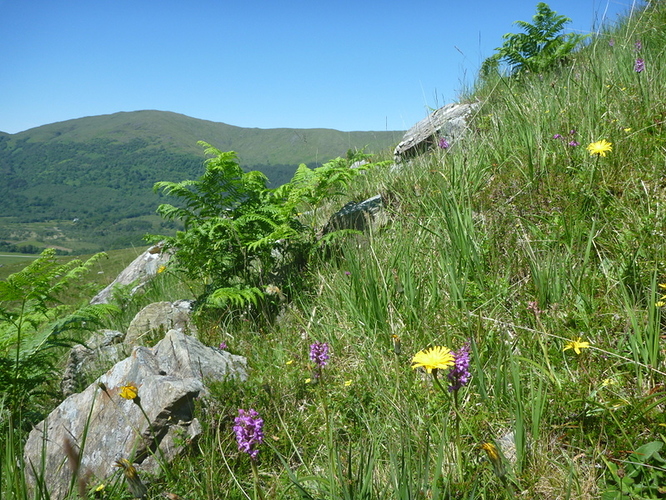 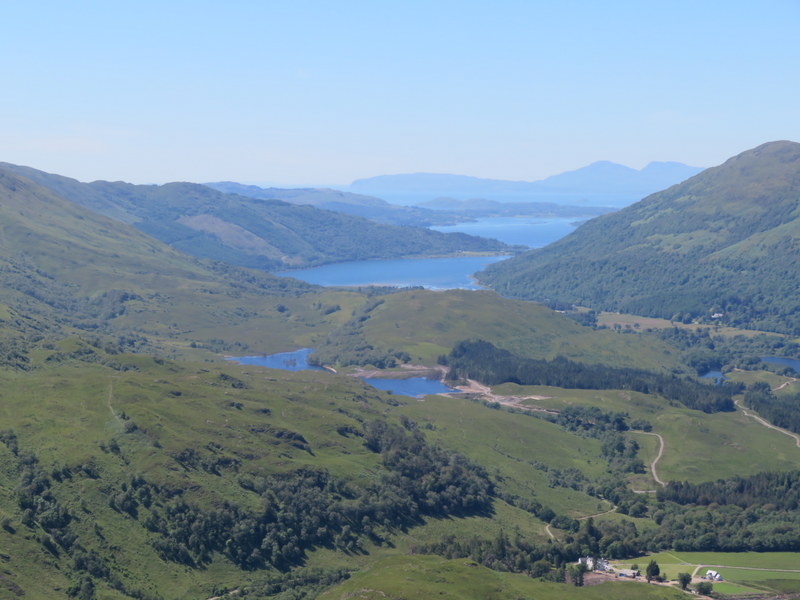 It was very slow going, and fairly early on Martyn was struggling but some encouragement from Caroline got him moving again, but by the time we were almost at the false summits on Leac Bharainn, Caroline had run out of energy. However, a brief rest and a Mars bar and we managed to get going again. Soon after we came to an attractive unnamed lochan, shortly followed by the larger Lochan Cairn Deirg, which was a lovely deep blue, with the hills of Glen Etive beyond. We had another brief rest here, seeing the only other walkers we saw on the hill all day: 3 men descending the next ridge at a much faster rate than we could manage. 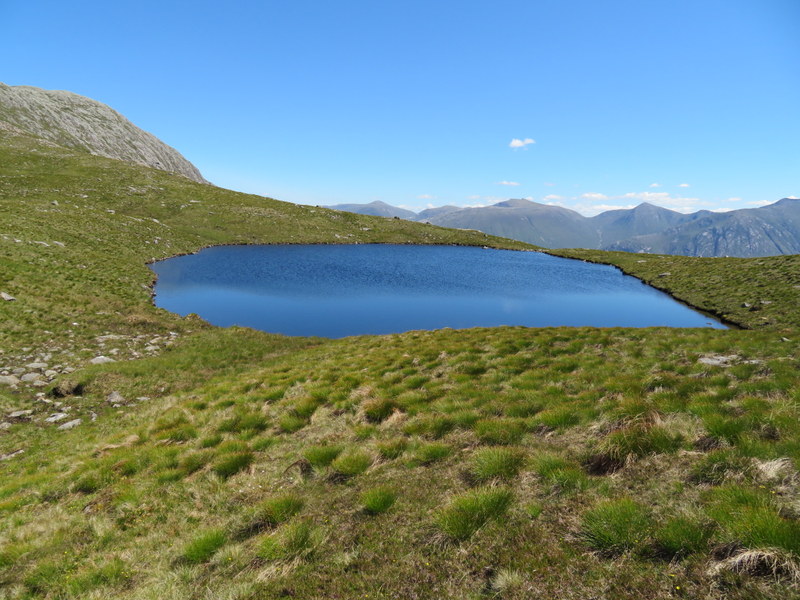 Anyway, onwards and upwards along the path that ascended the next ridge. The ridge gave fine views to Glen Etive, and soon another false summit came into view, which looked as though we need to bend left, but actually the main ridge headed right, and after a few more false summits, we were relieved when the fine “Vanessa” trig point came into view.

It had taken almost 4 hours to cover the 5 miles and approximately 950m of ascent to get to the summit: much longer than expected, so our time at the top would be limited. But views, what views: they needed to be taken in before we set up radios. We could again see Ben Nevis in the distance under clear blue skies, round to Beinn a’Bheithir, Bidean nam Bian and Buachaille Etive Mor looking impressive, and down to Glen Etive. It was hot at the top but not uncomfortably so, and for much of the time there was enough of a gentle breeze to keep the midges away, though a Smidge top-up was needed when the wind dropped. 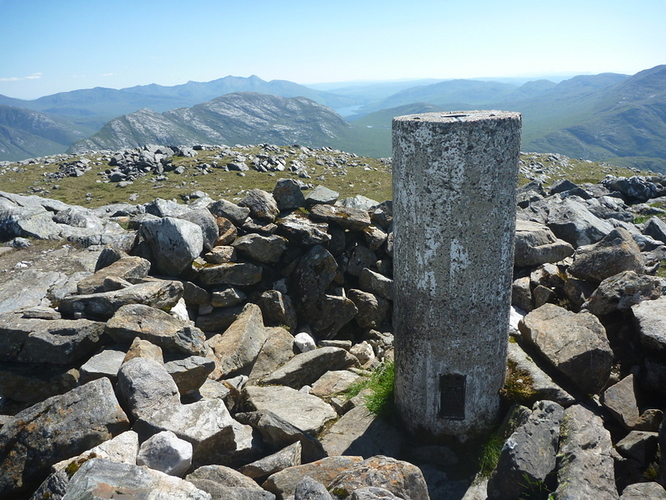 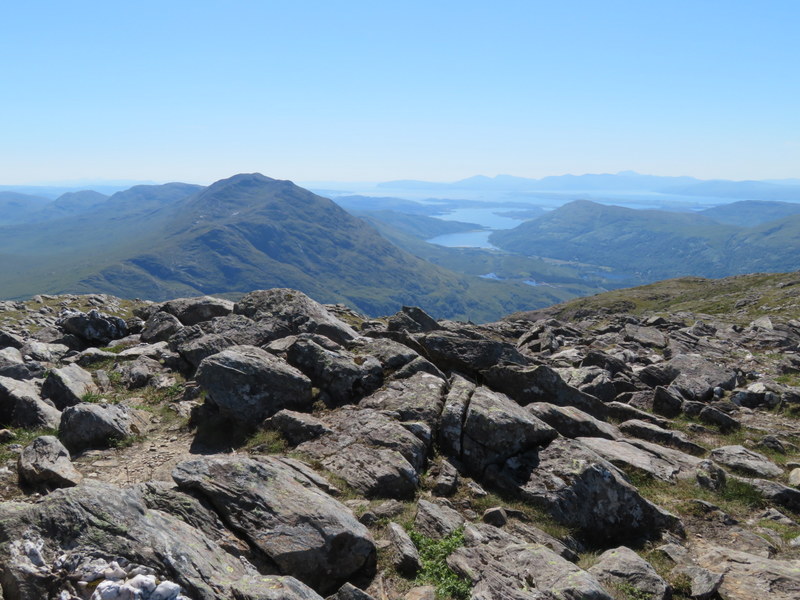 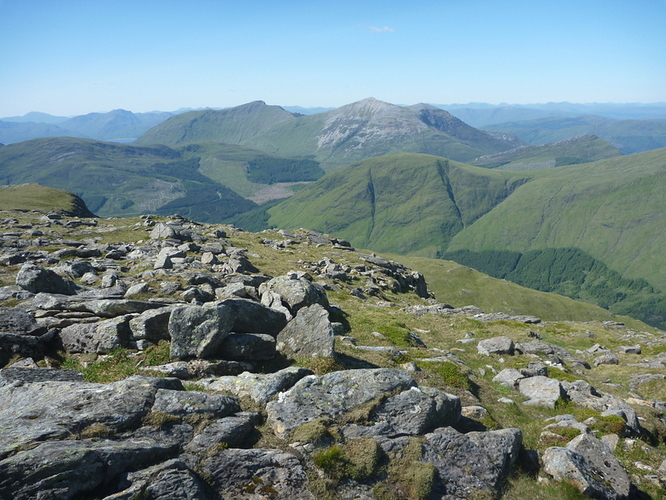 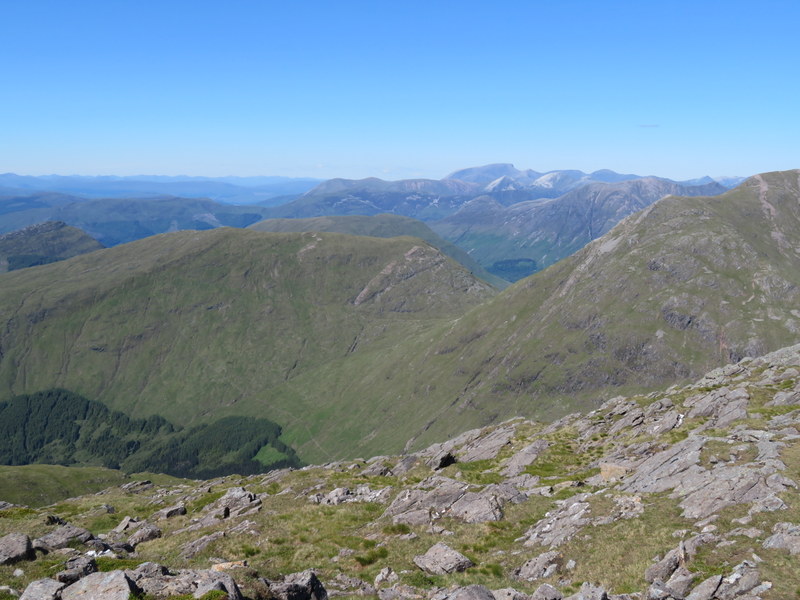 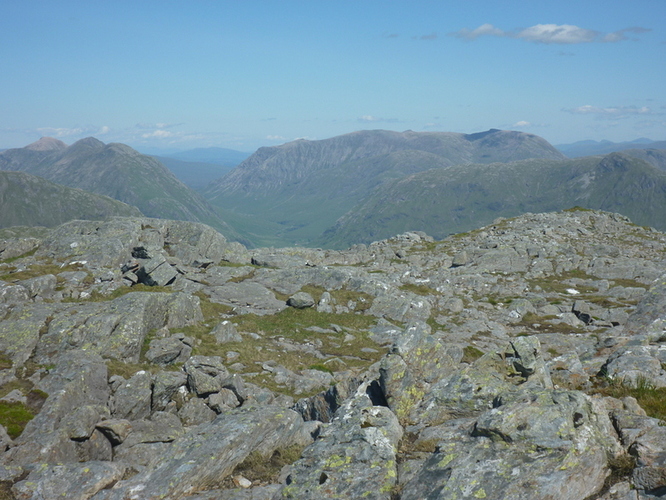 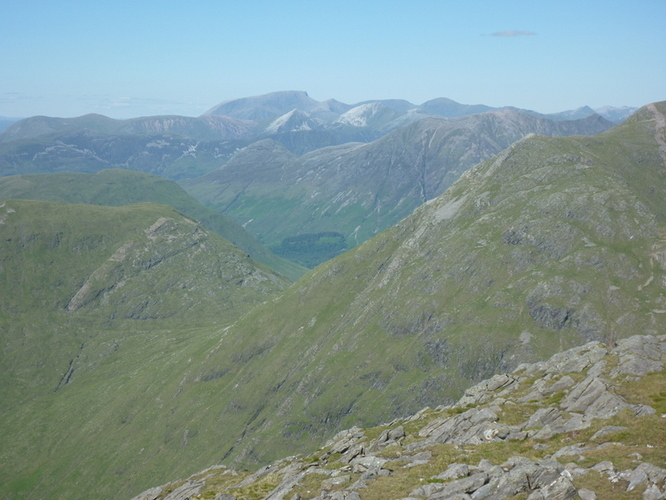 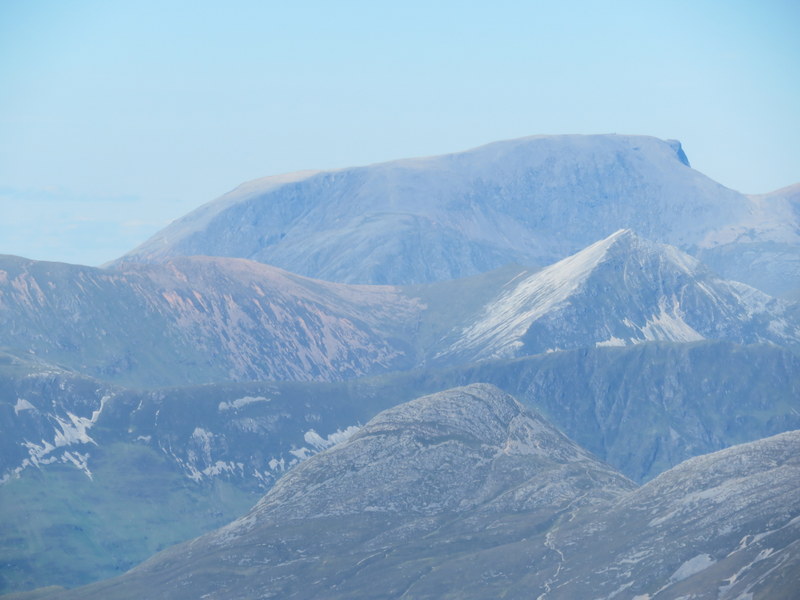 The trig point had a suitable hole for the VHF antenna, and Martyn set up HF a little lower where there was enough grass to get the pegs in the ground. Caroline took 10 minutes to get 3 VHF contacts which Martyn grabbed as security too, but then contacts dried up. Martyn then tried 5MHz, which wasn’t wonderful but got him 6 contacts to qualify. Meanwhile, 20 minutes after the previous 2m contact she was called by Jack GM4COX who qualified the hill for her. Another 20 minutes and 2 more VHF contacts in quick succession, including Esther GI0AZA who had improved the antennas at her end enabling us to have a conversation this time. Caroline then tried 7MHz, but conditions weren’t good and only 5 contacts were made. By the time we had packed up we had spent a couple of hours at the summit, so we knew we would be late back. 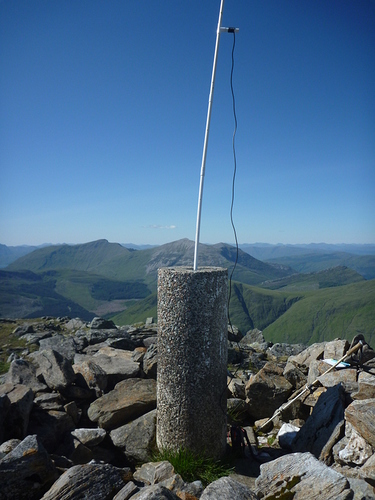 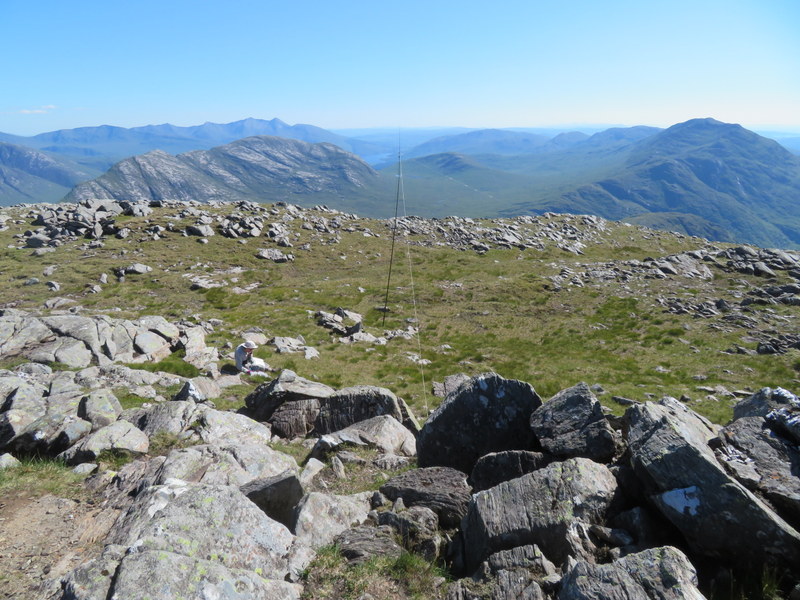 The descent roughly retraced the ascent, with the benefit of the views towards the coast. We did better at finding the intermittent paths on the return and headed to the south side of Lochan Cairn Dearg rather then the north. Even in late afternoon the sun was hot and we were starting to ration our water supplies to make them last. Caroline used the waters of the lochan to splash her trouser legs and shirtsleeves with water to get some additional cooling. There were midges around the lochan, but enough breeze on the southern margin to keep them mostly at bay, so we paused to eat apples, just about managing to finish them before the midges drove us onwards and downwards. Eventually we made our way back to the muddy ford by the trees, this time having found a path down the ridge: not visible on the ascent as it only materialised once over the initial hump. 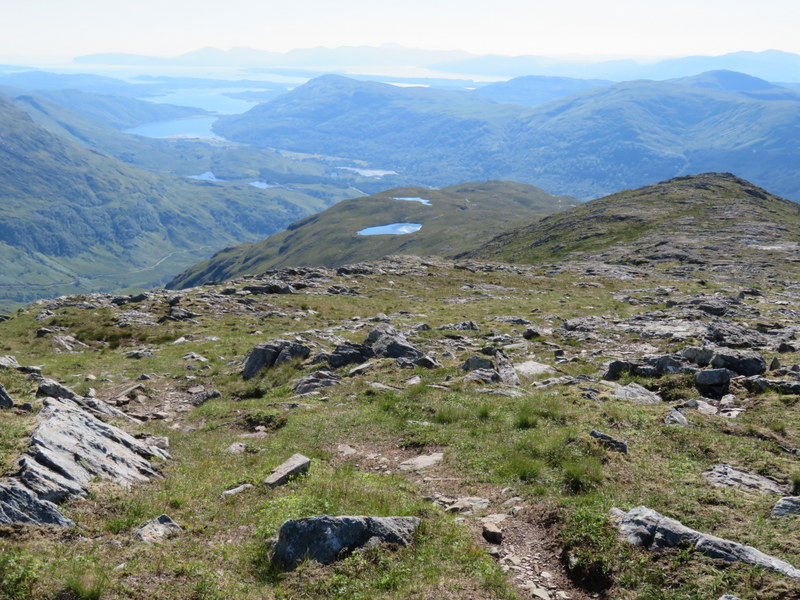 As we walked the final valley section, we noted deer in the fields either side of the estate road: clearly farmed as there were deer fences and cattle grids. Just under three hours after leaving the summit we were back at the car. We had consumed all bar a few drops of the 4 litres of water plus 600ml of fruit juice. Another litre of refreshingly cold water from the cool box in the car was rapidly consumed. The midges were making a nuisance of themselves, so we moved to different parts of the car park away from the car to change out boots to reduce the number of midges getting in the car. While we had been away two large pieces of forestry machinery had appeared in the car park: we were relieved not to have met them on the single-track approach road! 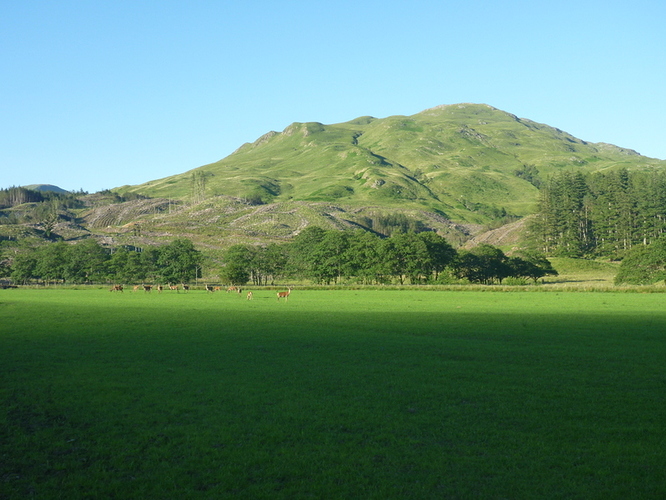 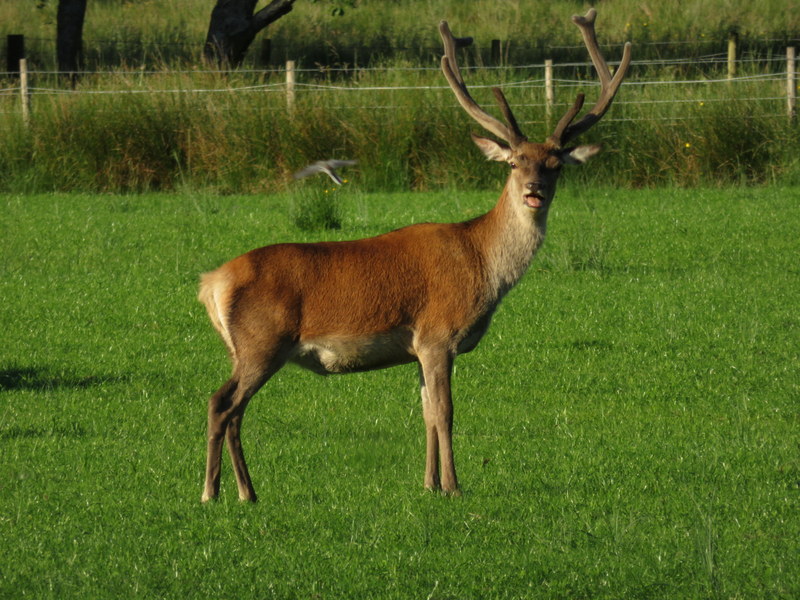 An exhausting day: the fine views were worth it, but that was an expedition at the limits of our abilities

Thank you for the wonderful report and photos Caroline. Looks like you had quite an adventure. My last round of Kentmere Horseshoe had me worrying about water rations, something that I’ve not had before. It’s not much fun.

An adventure to remember for sure.
Regards, Mark. M0NOM

And glad to have been your 4th.

PS: There are an awful lot of ‘Findlays’ about on the highland hills - hi!

This beautiful picture has just become my smartphone wallpaper.
Congratulations for your hard worked successful activation as well as for the report, which I enjoyed very much reading, and the great pictures of that beautiful scenery.
73,

And glad to have been your 4th.

Now you just need to activate it for the complete.

This beautiful picture has just become my smartphone wallpaper.
Congratulations for your hard worked successful activation as well as for the report, which I enjoyed very much reading, and the great pictures of that beautiful scenery.
73,

I think that it’s the combination of hills and islands with inland and sea lochs that makes the west coast of Scotland so attractive.

it’s the combination of hills and islands with inland and sea lochs that makes the west coast of Scotland so attractive.

Indeed.
I’ve always liked very much the combination of blue ocean and green land plus rocks and mountains.
To me, it looks similar to the North-West coast of Spain.
I wish I could have the chance to visit the beautiful Scotland some time. And activate SOTA there, of course.

The treatment seems to be working in the right direction so far. Thank you!
73,