The forecast was for the best day of the week, with cloud supposed to be clearing off the tops of the Munros. We headed south to Glen Affric following the single track road down to the parking area at Chisholme Bridge, which already had several cars. Our main target was GM/WS-029 Toll Creagach which would be a complete for both of us, but we hoped we might also have time to do GM/WS-265 Beinn a’Mheadhoin as well. We were slightly bothered by midges as we packed up, but once we moved out of the valley there was enough breeze to mostly keep them at bay. Disappointingly the Munros were cloud topped, but there was good low level visibility. 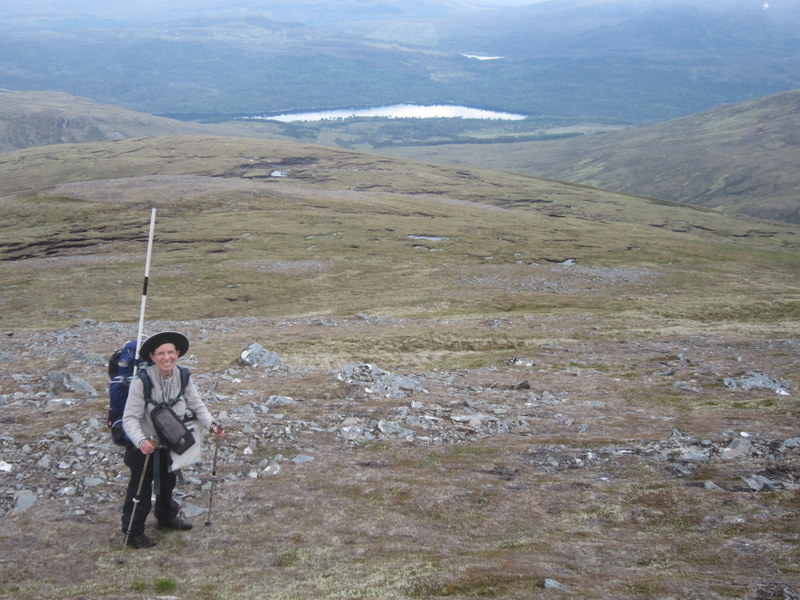 We took the track along Abhainn Gleann nam Fiadh, which led through an awkward kissing gate in a deer fence into a fenced enclosure where the natural vegetation was being allowed to regenerate. Soon after struggling to get our rucksacks with poles through another deer fence kissing gate the track split. We decided that we would ascend via the more westerly route and descend via the east. Back out in the open valley we got out the cameras to take views back, at which point Martyn discovered that while he still had his camera, the case had disappeared. Hmm had it fallen off at those awkward gates? We weren’t going back now, so continued along the track which faded to a path which became increasingly boggy as it dropped down to the river’s edge. Being fed up with the bog, and the gradient of the hill having eased we decided to head north up one of the spurs between streams. It was hard going on rough pathless and often damp terrain, and navigation was impaired by the clouds which were still sitting on the tops. After a moderately steep initial climb the gradient eased as we headed up the spur north of Beinn Eun, with the boggy ground eventually being replaced by stonier ground with shorter vegetation. As we got to the top of Toll Creagach the clouds lifted off of it and we could see snow still lying on the higher Munros, though they were still wearing a hat of cloud. 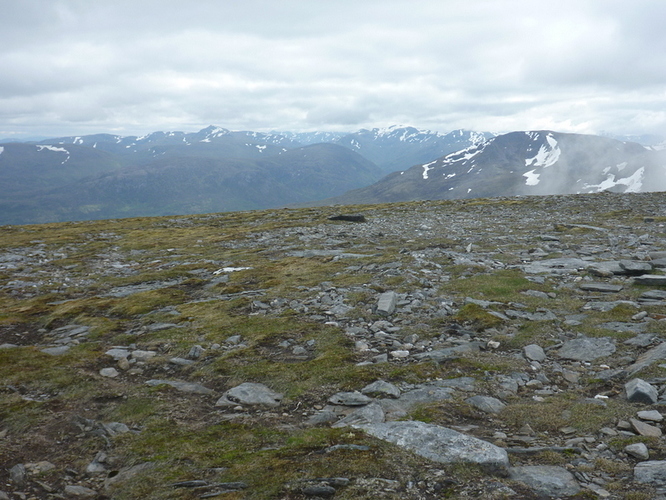 The small shelter near the trig point was occupied as we approached, and we chatted to the two men who were about to leave, swapping notes on our different ascent routes. As they left to descend via our ascent route we took up residence in the shelter, the trig point having a convenient hole to support the MFD for VHF, while Martyn moved a little further away to find somewhere on the stony top he could get pegs for the HF dipole in the ground. It took Caroline 20 minutes to get 4 contacts on VHF, but that was all there were. HF conditions were even worse than yesterday. Martyn got a single contact on 5MHz before using 7MHz to qualify the hill with just 10 contacts. Caroline then went onto 14MHz to get 9 contacts and make her QSO count more respectable. Our final contact was an S2S with Spain which we both grabbed. 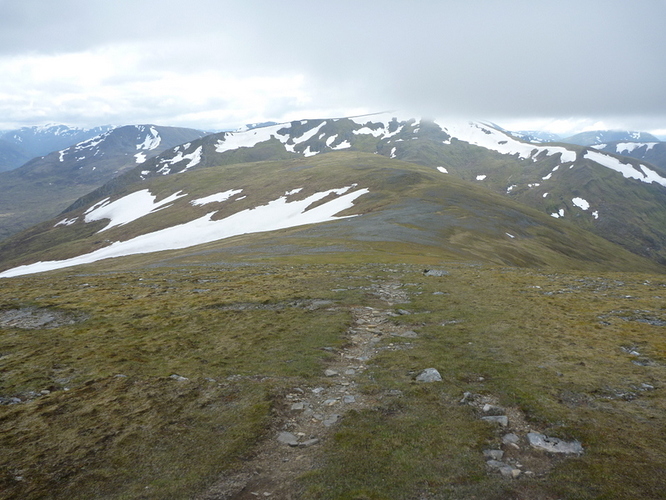 We decided to descend via the route the other walkers had ascended by as it looked more interesting and the clouds had lifted slightly. It was however longer, but we had already spent too long on the first activation to get in a second. We headed along the ridge towards the higher but non-SOTA Munro of Tom a’Choinnich, the clouds lifting enough to give views of Loch Mullardoch and the hills beyond, and better views of other of the Glen Affric Munros, though the clouds never managed to quite lift off the highest hills. A pleasant ridge walk. Dropping down to the col between Tom a’Choinnich and Toll Creagach we picked up the “stalkers’ path” running down Allt Toll Ease. We soon had a patch of snow to cross as the faint and occasionally invisible path headed down, crossing the stream multiple times before becoming more defined, though still very narrow as it dropped back down into Abhainn Gleann nam Fiadh. We followed the boggy path which led to the better track.

We looked for Martyn’s dropped camera case as we retraced our steps, but there was no sign of it by the awkward kissing gates. As we approached the car park Martyn was looking for the case on the ground in case it had dropped, when Caroline suddenly spotted it hanging from an overhanging branch. We can only guess that someone had seen it on the ground and rescued it from the dirt!