We are going to Arran for 5 days on 15 May and then spending a further 10 days in the Moffat/Biggar area. We have lots of plans and lots of maps ready for SOTA activations BUT… will my trusty VX-7 with 5w yield me many (any??) contacts on 2m fm and/or 70cm fm when we are activating mostly 2 and 1 point summits (with the odd 4 pointer if our legs get us there)?

I usually use a dipole but have a short fishing pole with slim jim (more weight to carry…) and even 2m and 70cm Yagis but am usually too successful/lazy to carry or assemble these. Will I have to stagger up with them… and am I likely to get any contacts even then? The sort of hills I am thinking of are SS- 083, 122, 142, 152, 177 and some of the smaller summits on Arran.

This will be the first time I have tried 70cm in Scotland and feel I just may have been lucky in NI last year when I had a lot of 70cm contacts - often mobile - but the Mourne Mt summits were usually much more prominent and higher than on this trip.

Any advice gratefully received (except for ’ you are a week late for the good weather’…). Oh yes, has the midge season started yet?

GM/SS can be a mixed bag. Sometimes it is fairly easy to make contacts, other times it is very challenging to say the least. My recommendation is to generate as much ERP as you can. I use a small linear and a 5 element yagi and even that doesn’t always guarantee contacts. However, I was restricted to running my 1 watt handheld on one summit and had no problems qualifying it.

The main areas of 2m FM activity tend to be around Glasgow, down the Ayrshire coast and the northern Lakes. There are a few stations around Biggar / Moffat as well. As for 70cm, I rarely make any contacts on the band, so prefer to use my 817 plus 2m linear amp combo rather than the 857.

Paul and I will be in GM next week, but a little way further north. There might be a chance of an S2S, so I will keep an eye on the spots.

Yes you can often qualify with just a handheld but I wouldn’t bank on it. A directional vertical antenna will make a huge difference.

GM/SS-142, Scaw’d Fell: A long way from anywhere but I don’t recall much about it other than heather and lots of it.

Midges, early in the season and the Borders insects are pretty tame compared to the West Highlands. Arran? Can’t say but I wouldn’t expect much TBH.

Forgot to mention the summits Viki. Might be worth a look at my reports on the Summitsbase site. Wether Law SS-177 was a recent venture. Forestry being planted, so the track route is the best option - some felled forest to be negotiated, but not much. Craiglee SS-152 is a Galloway yomp - you will be pleased when you get to the summit!

Any questions or information required, then drop me an email (QRZ. com).

If you do them at weekends you’ll have a better chance activating as more of us are listening & 3 or 4 of us are usually on a hill looking for a S2S contact. I do amazingly well with a homebrew flowerpot antenna attached to my rucksack and running 5w through it from a Yaesu FT2DE.
I’ll look out for your spots and give you a shout if I’m able.

Technically it is East Ayrshire. It has several routes to the top some longer and easier.

Viki, I will have a listen for you on Sunday as my QTH is just across the water from Arran but as for the rest of the days I will be busy at work admiring the view of Arran.

Best of luck with the activations but you may need the beam over in the Borders.

Hi Viki,
I was on Arran in June last year and I would stick with 2m, I had one good day on 2m had nine contacts was on GM/SI-046 and was all GM calls also did GM/SI-006 Goat Fell I was hoping for more 2m contacts but had only one, anyway hope you have a good time on Arran and ref the midges didn’t bother me as had plenty of Skin So Soft from Avon on the secret with that is you need to spray in on about an hour before you set off, I also use a mosquito head net if it is bad you can pick them up on e-bay for around £2.50 have fun.

Technically it doesn’t really have East Ayrshire ground, more Galloway, but that’s splitting hairs. It’s all in the detail of the ground between the tumps. LOL

Viki, if you haven’t experienced Galloway ground yet, then I can recommend several summits to get you initiated on.

A good pair of fully waterproof boots and gaiters are essential. Avoid stepping onto the grassy tumps as they are ankle breaking stuff. The slimy stuff (sometimes foul smelling) between the tumps isn’t much better. Having to step over the tumps is energy sapping.

Skin So Soft from Avon

As they say, other brands are available, but this is the best stuff for me - that is if I remember to apply it before we arrive at the parking spot. A buff is a good way of keeping the blighters out of your hair. Hopefully this week’s heat wave will have killed a lot of them off… then again…

A good pair of fully waterproof boots and gaiters are essential. Avoid stepping onto the grassy tumps as they are ankle breaking stuff. The slimy stuff (sometimes foul smelling) between the tumps isn’t much better. Having to step over the tumps is energy sapping.

As Gerald says Galloway ground can be very difficult but as famous boxer almost said “Fly like a butterfly or sink to your knees!”.

There is not much sign of midges on the hills at the moment - it has been too windy here for days. I was up Troweir Hill GM/SS-257 yesterday and it was very difficult to walk in a straight line due to the 50+ mph gusts.

Thanks everyone for the helpful advice. I had no idea that the Skin So Soft had to be applied up to an hour earlier - I always slap it on just before leaving the car - doh! The head net is already in the packing - we stayed in Glen Affric some years ago…

It looks as if the 5 element yagi is going to have to have an airing and I will still need to be lucky. I realise that Sat/Sun are the best days for me (but not M0JLA on 40m!) but we move on Saturdays which cuts down the chances. Looking at the weather forecast this all may be a bit academic as the fine spell will break as we arrive on Arran. SS-074, 082 and 100 are definitely on the list as we are staying very close to them. I have a nasty feeling that SS-152 was a typo on my part but interested to hear the comments on Galloway walking. Many moons ago we camped in Glen Trool and when walking I stumbled and got stranded on top of a giant tussock completely unable to reach the ground (Rodney was laughing so much it took him sometime to come to the rescue!) A return visit to that area with radios is not high on the list!!

Thanks again and please listen out - especially if there is a chance of a S2S. 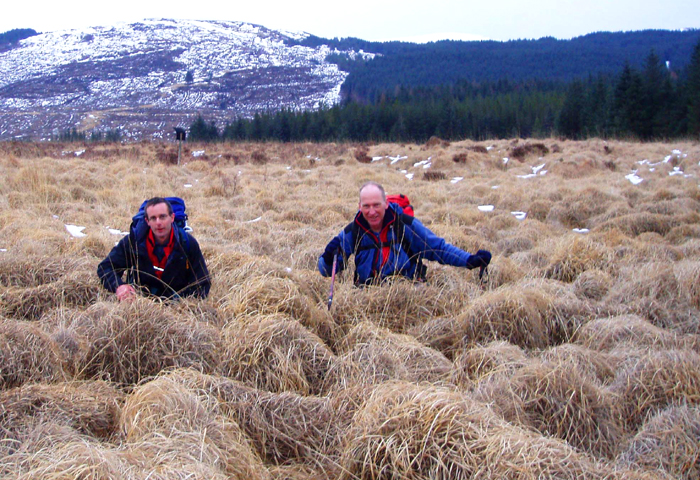 Neil, you must really get your back lawn cut!

Everyone has different advice, and gets different degrees of success. I daresay you could find someone who says that you have to turn around 3 times after application and say the magic words, and assures you that they’ve never had a bite in years after following this process.

The easiest solution is to simply avoid nice weather. Strong winds, freezing cold and heavy rain? Midgies hate that. No bites in bonus season, I suspect!

I’ve found taking my XYL is the best midge solution. They bite her in preference to me!

Skind So Soft and / or suncreme does the job. It doesn’t stop them swarming about you but when they land they don’t bite as the stuff tastes horrible to them. I have come back from walks in good midge country looking like a loaf of bread covered with poppy seeds as there are so many black dots stuck to my arms!

This is why after my first sampling of the Galloway hills back in the 60’s I avoided the area like the plague!

And I’ve still to do it.

I see it this way: with the infinite variety that Scotland has to offer, with enough glorious summits (not just SOTA) to fill several lifetimes, why bother with the masochists delights of Galloway? To do them just to complete a list is to reduce hill walking to a more energetic form of stamp collecting. Others may, probably will, disagree, but that is my feeling.

Wasn’t there some talk of using that one to store radioactive waste? Probably a good idea…

There was. That’s because it’s about as far from people as you can get in the UK and also is the right rock, right level of geological activity and right shape of mountain. But it was 30+ years back and was dropped.

It is the fact that it is a right royal bitch of a walk to get to Mullwharcher that makes it even better.

and here’s one of mine: 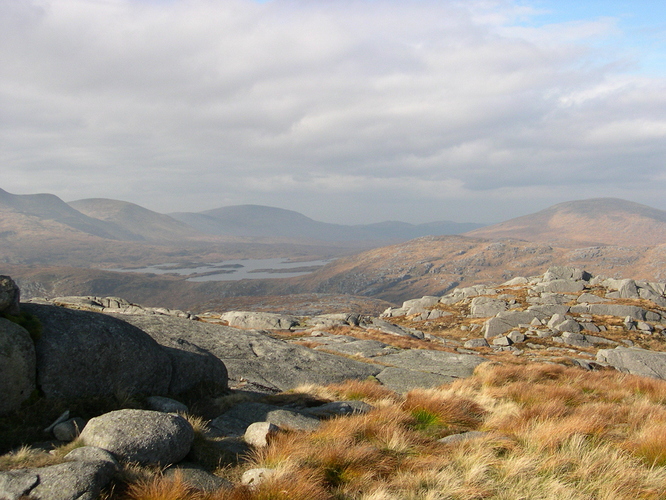 It’s the views like these that make Galloway ground a high but justifiable price to pay!