We activated this hill as a break in the long drive home from Blairgowrie, though most of the journey was to follow. The weather was the best of the whole holiday, so it was a shame we spent most of it driving.

We parked in the main North Berwick Law car park to the south of North Berwick. Being a lovely Saturday it was fairly full but cars were coming and going all the time and we found a space.

With radios and lunch packed in rucksacks, we set off up the hill. There was a continual flow of people going up and down as we followed the path as it wound round the hill, giving increasingly good views. As we ascended we heard Robin GM7PKT and Jack GM4COX chatting from their respective summits, and also working Ken and Christine in Edinburgh. That boded well for 4 VHF contacts from the summit! At the top we quickly both grabbed S2S contacts with Robin and Jack using the handheld and rucksack antenna, but strangely Ken and Christine were now much weaker, so we said we would set up the proper station first.

But where to set up? The summit is small and very busy with trig point, toposcope, a little ruined building and a fibreglass whale jawbone! Caroline moved a little down from the summit on the west side, and Martyn went a little lower to somehow manage to string the dipole round the rocky terrain. Even with FT817 and vertical dipole Caroline still struggled to work Ken and Christine, taking several minutes before Christine was confident she had heard my report. Then there was another VHF S2S – Robert (Mr Tinto) GM4GUF on Culter Fell (which Caroline needed as a complete!). Caroline was qualified now, and once he had the HF dipole up Martyn was qualified with 5MHz contacts – though conditions weren’t good and he only got 3 contacts. He noticed a spot for Allan GW4VPX on 20m, and could hear him on the 60m antenna, so a quick change of links as we tried to make contact for another S2S, but Allan clearly couldn’t hear us, and went QRT. With most of her lunch eaten Caroline decided to take over the vacated frequency and was soon called by HB9BIN for an unexpected S2S. After 9 contacts callers dried up, and as time was getting on and with a long journey ahead we decided that we didn’t have time for more bands. It was very pleasant at the top, and we had managed to place our stations so they weren’t in the way of the continuous stream of visitors to the summit, and we would have liked to have stayed much longer!

As Martyn dismantled the HF dipole Caroline finished her lunch while putting out calls on S20 and listening. With lunch finished she put out final calls, and had her finger poised to power off the FT817 and pack up herself when she heard Robert GM4YTS calling from another summit. With her 5th S2S in the log, Caroline called to Martyn, but there was no response, and no sign of him. Where was he? Finally Caroline wandered down to a steeper part of the hill to find him winding in the dipole and he came up to get the S2S too! 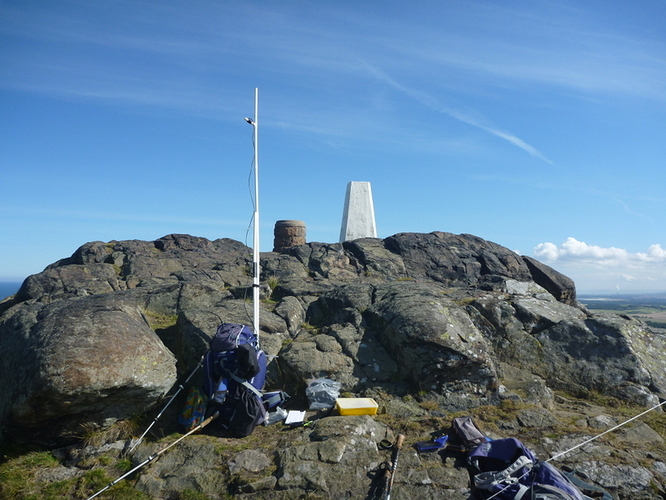 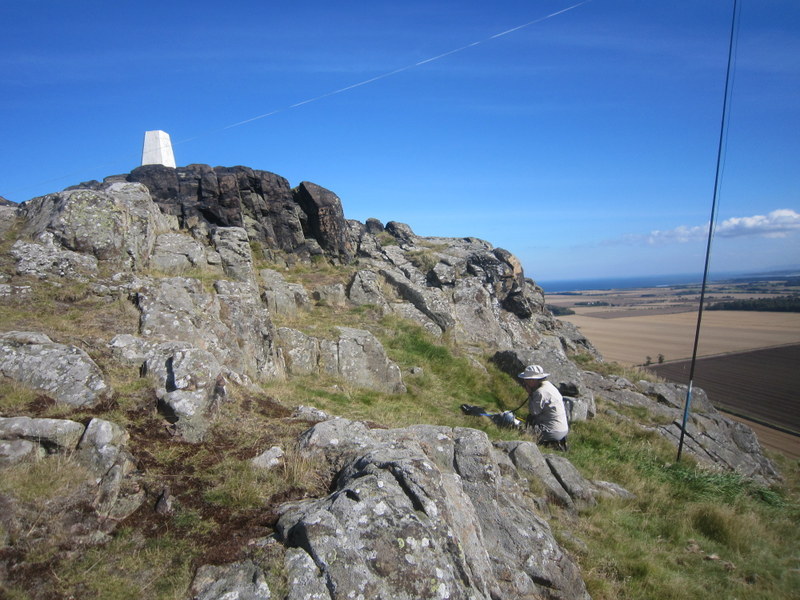 Thank you for the reports and the pictures. Sorry I didn’t hear you…it’s not often I miss an s2s

Looks like you had a cracking day Caroline. The whale jawbone was a real bone for a long time till the sea air caused it to rot and collapse. It was a local feature and its absence was a problem. Eventually a fibreglass replacement was made and installed. This is OK because the summit now looks correct again and the whales approved this time!

You’re right about fitting HF antennas in the limited space, there’s not much room.

You’re right about fitting HF antennas in the limited space, there’s not much room.

Surprised you struggled with Ken & Christine, I would have thought it was line of sight. Your weather looks as good as it was for me in February. Pic of the mentioned whalebone. 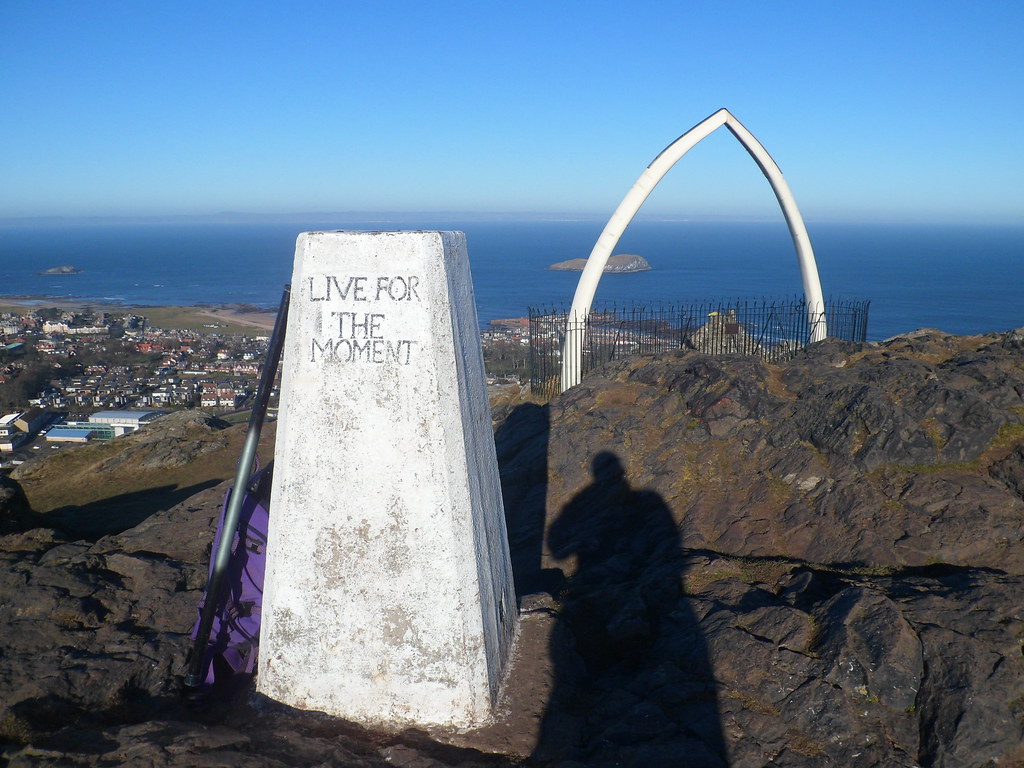 Ken will no doubt confirm, but I think his QTH is shielded from North Berwick Law by Arthur’s Seat.

YES, Arthur’s Seat is directly in line with North Berwick Law from here;
I always had problems contacting GM3BQA, Jim (now SK) on 2 mtrs. His QTH was less than a mile to to the south-east of North Berwick Law. Jim, Christine and myself used to operate from the Firth of Forth islands for the IOSA award program< and staying in touch with Jim was always a priority; even with that volcanic plug; Arthur’s Seat in the way!
73

Yes, it was the best weather of the week, and there were lots of other people enjoying the summit too. More pictures of all the summits including more of the “whale” bone on the SOTA facebook group.