This was the first Scottish activation of our June SOTA tour. We only managed 8 activations over the week, though 3 of them were previously unactivated, and three were completes for us. In general radio conditions were poor, but we did manage to qualify them all.

We stopped off to do Birnam Hill on our journey north. It was relatively late in the day and we still had a couple of hours drive to the holiday cottage in Contin, but the weather was good - blue skies and fluffy clouds, and the forecast for the next day poor, so we made the most of the better weather.

We parked in the Birnam and Dunkeld Station car park, loaded rucksacks and headed out the northern end of the car park, taking the path under the railway and following it along the valley side until a path headed left with a sign to Birnam Hill. It was a good path through trees with a steady ascent and were soon feeling rather warm. Eventually we came to a large rock with good views down towards Dunkeld and the valley. It looked summit like, but there was still some way to go, and we started to wonder if we had time as we slowly ascended while gently meandering through open wood and moorland. Finally the summit appeared with a short steeper final climb. We climbed onto the stone viewing platform and took photos – good views all round.

The terrain wasn’t ideal for HF, so Martyn set up a little way down the hill, while Caroline set up VHF propped up against the stone top. Caroline started off with a VHF S2S with Robin GM7PKT, just about to leave his summit, then got two guys called Mark camping north of Dundee, and managed to qualify the hill on VHF with a contact into Pitlochry. Martyn only got 2 contacts on 5Mhz (one an S2S with Rod MI0JLA) so went onto 7MHz to qualify the hill. Caroline then went onto 14Mhz which was interestingly varied, with contacts into G, GW and GI, as well as the more expected selection of European stations, plus one USA. We didn’t have time for more bands, so we packed up and returned to the car the same way. A pleasant activation. 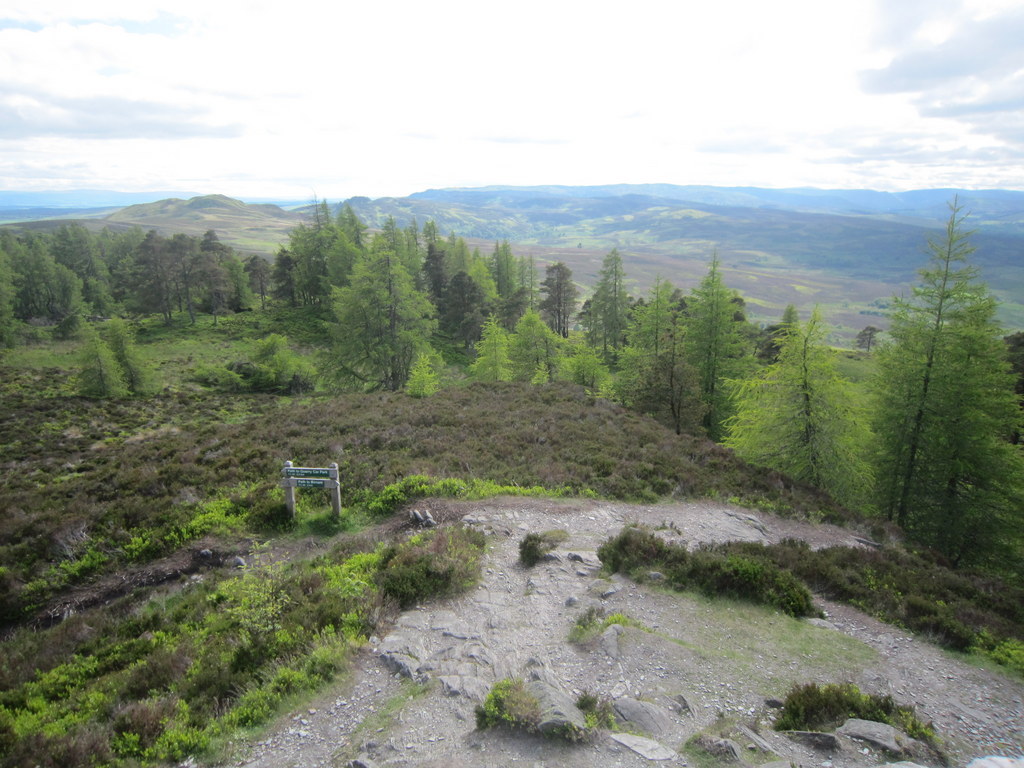 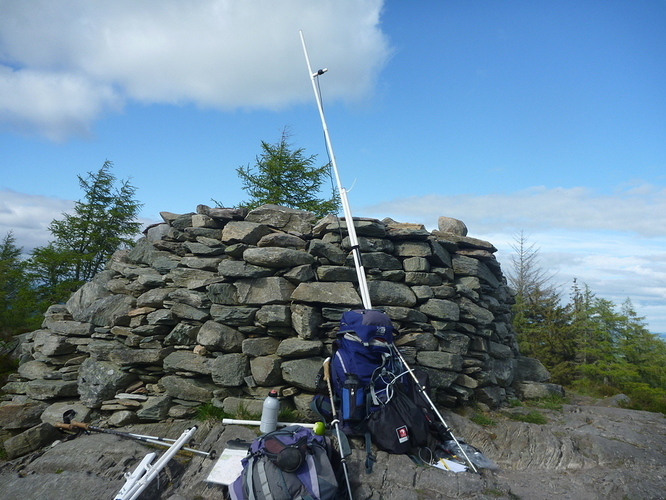 Which was very much appreciated at my end, thank you, as my last contact from GI land before getting back in the car to head for Dublin and home.

It was a good path through trees with a steady ascent and were soon feeling rather warm.

Yes, that accurately describes the ascent. Paul and I were pleased to reach the more open area where the wind provided us with some cooling. Unfortunately, at the summit the wind was too strong, so I didn’t try 2m from this one. For some reason I never seem to have much success using a handheld on FM, so I rarely make the attempt.

It’s a grand wee summit. The ascent through the forest is very pleasant. It does seem to go and on a bit on the ascent. Took no time to get down Looking at the photo, the wooden compass feature appears to be missing from cairn. There are some fine views to be had from there. It’s just in the right place and right height.

the wooden compass feature appears to be missing

When we were up there in June there was a wooden “arrow” lying on top of the “King’s Seat” with an N on it guess that was the remnants of the compass… Did seem to be pointing North though!

the wooden compass feature appears to be missing

When we were up there in June there was a wooden “arrow” lying on top of the “King’s Seat” with an N on it guess that was the remnants of the compass… Did seem to be pointing North though!

I think it must have gone AWOL since then, since neither Martyn nor I recall seeing anything, and a review of our other photos doesn’t show anything matching your description.

Agreed that it’s a grand wee summit - despite our preference for uniques it’s one we might revisit. A pleasant walk up to good views.

There are more photos of it and our other summits on the Facebook group.