I will be taking a holiday in Northumberland this summer and am considering activating some nearby summits, including GM/SS-210, Rubers Law.

I note a comment from G0EVV stating, “… that a deer farm has been established on the SE flank of Rubers Law. 6 ft fences and locked gates in abundance. Access during the calving season is very much discouraged, but access up the lonnen from Billerwell Cottages is permitted at other times …”

Does anyone know if I will be able to walk to the summit from Billerwell cottages in July? 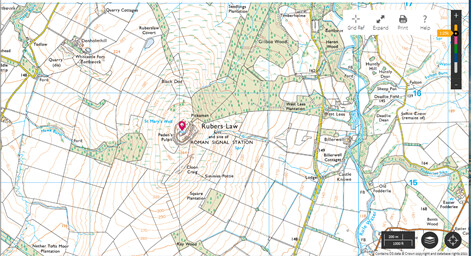 Park at or near Rubers Law Wild Woods Camping. I rang the owner and ask if I could park and he was confused and wouldn’t say yes or no. It’s quite simple “Can I park please?” to which you reply yes or no or ask for some payment. Unable to get a yes/no I offered to pay him in cash for an afternoon’s parking and he finally said I could park for free but laid down all kinds of oddball rules. When I turned up he was nowhere about and so I told a member of staff " the boss said it’s OK " and booted up and left. However, there does appear to be more car parking that is not on the campsite grounds just by their entrance where lots of people had parked and were going for a walk. NT585169

I followed the signs to Spital Tower from the camp site and then along the Borders Abbeys Way to a fence at NT587174 then crossed into a field and went in a “sort-of” direct line to the summit.

It’s trivial till the final ascent.

Taken from near NT580158 looking approx South to the summit. 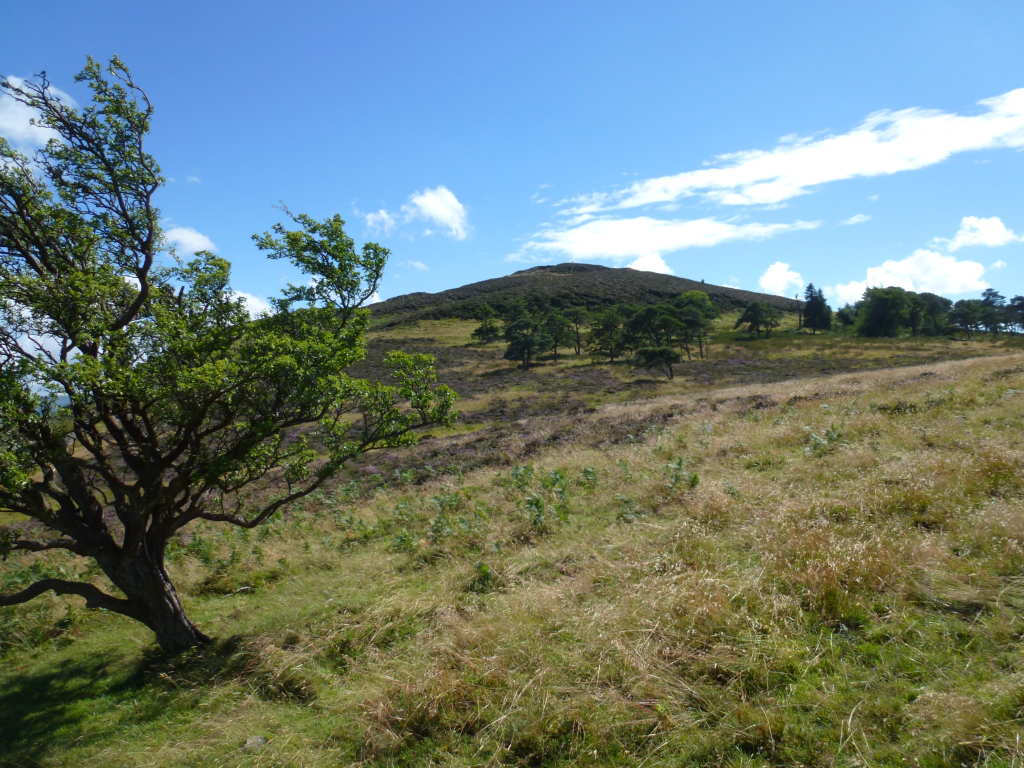 Summit Trig. It has been sabotaged by some dumb people with a celebrational plaques including covering up the hole / mounting lugs on top. Still they did paint it white. 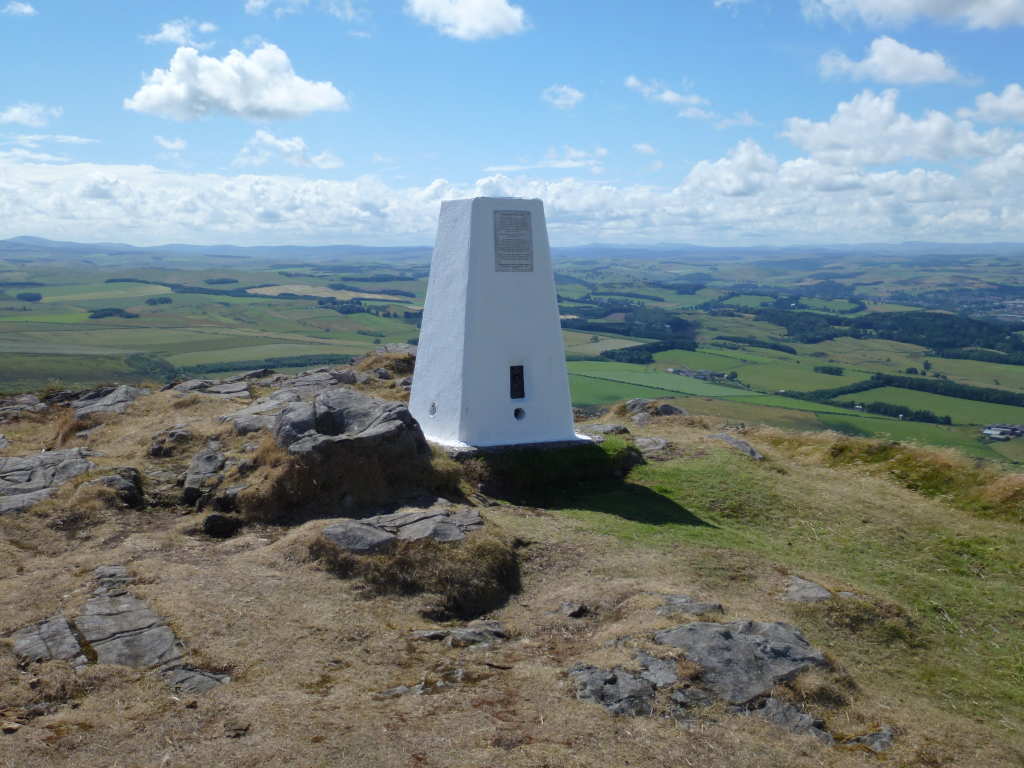 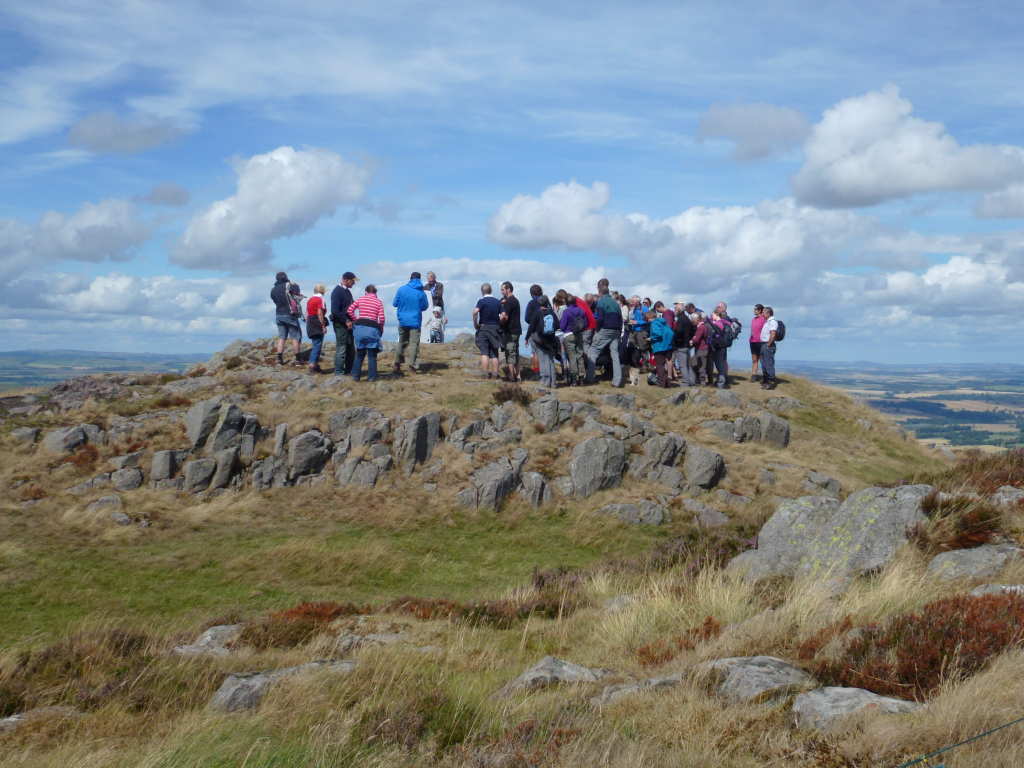 There are plenty of people saying they went from near West Lees farm. But there may be plenty of bracken and gorse. So with deer and bracken, do a good check for ticks when you get back. Signs advising you to keep out/no unauthorised access can be treated with the contempt they deserve, this is Scotland! Likewise, the deer gates only appear to be padlocked and are unlocked.

Many thanks for the info - much appreciated.

I’ve found my GPX track for when I did Rubers Law. I can email it if you want a copy?

Call at Billerwell cottages prior to ascent for local advice. If the gates up the lonnen are locked, access from Billerwell side will not be possible. You will not go onto the fields containing deer during your ascent.
Regards
David
G0EVV

I’ve found my GPX track for when I did Rubers Law. I can email it if you want a copy?

That would be very helpful, thanks.

Call at Billerwell cottages prior to ascent for local advice. If the gates up the lonnen are locked, access from Billerwell side will not be possible. You will not go onto the fields containing deer during your ascent.
Regards
David
G0EVV

Thanks for the info.

I had to look up what “lonnen” meant. The GPX is on an other PC, I’ll mail it when I get home. (Walk from WFH kitchen office to shack!)

I had to look up what “lonnen” meant.

) a narrow lane was known as a lonning. In Northumbrian a Lonnen is a narrow farm track

For future information for activators who dont know the area. If you park at West Lees (to the east of Rubers Law - room for a few cars), there is a good path right up to the summit of Rubers Law. It takes you alongside the new deer fence but there are no access issues through the deer farm itself going this way. The last bit is fairly steep but the views across the Borders are worth it on a nice day.

The first part of the path is show on the 1:25000 scale maps but appears to dead end in the woodland. The footpath forks left near the end and goes up the fenceline.

You can also walk up from Denholm to the north west, on good paths via Woodend - this is a popular walking area.

I quite agree with MM7KWZ, the route he describes which goes along the deer fence for some way is excellent. Then a short steep bit to get on to the top. We were there in September and it was the most interesting summit we visited from Kelso. It was just sad that the cloud came down and it became pointless to try and explore the lumps and bumps after qualifying on both 2m and 70cm. Would definitely be on the ‘visit it again’ list if we came back to the area.
Viki M6BWA