I am trying to type this following why has to be ( for me ) one of the most challenging hill climbs completed. My problem is that whilst my body is 54 years old and now spends the majority of most days either talking or driving a mouse my brain has failed to recognise this and still thinks that I’m as fit as I was 25 years ago!

The XYL needed the car so I selected a nearby hill ( based on my previous cycling fitness ) which required a 10 mile road cycle, the plan was then to follow the track up the glen and leave the bikes and do a quick push for the summit.

The really nice flat driveway up the glen was marked private so a short detour followed which involved carrying the bike. The track was good and soon we ( My 13 Yr old son who despite my best attempts has no interest in radio but loves mountain biking and grouse beats in his spare time earning per hour more than me…) were about to start up the hill when we heard the sound of an approaching vehicle. I was a little apprehensive as the SOTA pole protruding from the side of the rucksack may look like a fishing pole, so fearing the worst I went to meet the Gamekeeper, and was somewhat surprised to find a Police patrol car. I didn’t find out what they were doing so we proceeded up the hill. My best stab at Nasmith seemed to indicate about an hour, but the ground was very tussocky so it was 90more mins to the summit. Managed quite a few contacts whilst my companion moaned about the lack of 4G which made Snapchat slightly more challenging.

The decent should have been easier, but we took a direct route to the track, only to find the “track” was more possible in a boat.

Finally got to the bikes, headed for the road and after what seemed only like 20 miles we were met with the sign informing us that there was 5 to go. I now know what it means when on the “Tour de France” cyclists legs have gone. My legs were somewhere up Sail Chalmadale and managing to climb out of one of the many potholes on the road was almost my limit!

Thanks to everyone who worked me. Pictures to follow as I’m trying to work out how to do it from a phone with a Bluetooth keyboard )

Paul ( & Matthew… who thought that on the basis of The Calf being 7 points in Winter this should have been at the least 14! ) 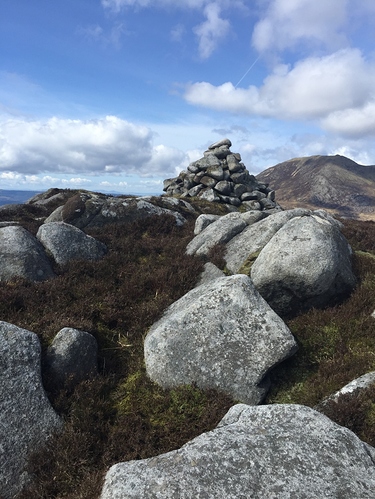 I presume the new full-suspension bike was your son’s?

A job driving a mouse has taken its toll on me too. I sympathise 100 per cent. I usually allow quite a bit of bunce in my time estimations. Naismith’s rule is very much subject to being personalised.

Many thanks for the contact. I was surprised that you did not work more people as you were an excellent signal. The amp certainly helped. Strange one way QSB though.

Thanks Paul for the NEW one! I think I’ve only one left to chase on Arran.

And note no Alerts for today. Guess yesterday’s escapade knocked the stuffing out of you

PS: what was the aerial you were using?

G0FEX
Hi Paul
Nice to catch you on Arran, the secret is (take your time) and you will get there eventually.
Many thanks for the contact, I think our first…
Cheers Ken

In answer to the questions I didn’t have any suspension and the antenna was a linked dipole at 7m with the end close to the ground. Tried 80m first but only had 1 QSO.

Today was squirrel watching and a family mountain bike ride so no SOTA opportunities.

Paul, you need to get the ends at least a metre above the ground. The effect on your radiated signal strength of raising the dipole ends is noticeable.

Thanks - the issue was the mechanics of attempting to attach 2 walking poles to a too heavy a rucksack for the bike part of the ascent. I also missed the poles on the way down! Using rocks managed to get one of the dipole ends approx 2m up thanks to a well positioned boulder, the other leg was nearer the ground. When on 60 ithe low end was probably about 1.5 m up, the 80m extension was close to the ground 80cm or so due to the slope away from the summit.
The cycling part (10 road miles each way) with a backpack was a challenge, I probably need to get better at Morse to get the weight down further or think of clever ways of getting the weight on the bike not my back…

P.S. Possibility of Goat Fell later in the week, may try 2m FM and keep it simple.