The forecast was for another hot day due to be hotter than the previous day. We again wanted to head for height to get the benefit of any breeze. The bedroom window of the cottage looked out towards Beinn Bheag, a very attractive foothill of Beinn a Ghraig, so Beinn a Ghraig was an obvious target. We walked directly from the cottage but were slightly delayed by talking to workmen who had come to fix the broken dishwasher door and some failed lights in the bathroom (though we hardly needed lights with the long evenings). The workmen did have some tips on routes up our two targets.

We took the track through the Benmore estate towards Loch Ba, following it along the loch for a while looking for the faint remains of an old drove road the workmen had suggested was there, but didn’t spot it, so having passed through a fence we left the track for the open hill. It was hard hot work making our way up, finding occasional sight of faint probably animal track through the vegetation by streams as we aimed at a low point in the ridge ahead, from where we intended following the ridge right to the summit of Beinn a’Ghraig. The workmen had advised heading for the grassier areas which we had, but it became clear that beyond the green the low point of the ridge was only approachable by some nasty scree. Caroline was ahead and advised Martyn to try to head further right while she carefully crossed the scree to an area where the stones had occasional bits of vegetation holding them together. As usual it took longer than we thought it should to get to the ridge, but once there we had a nice but sometimes rocky ridge to the summit, with some slightly cooling breezes. 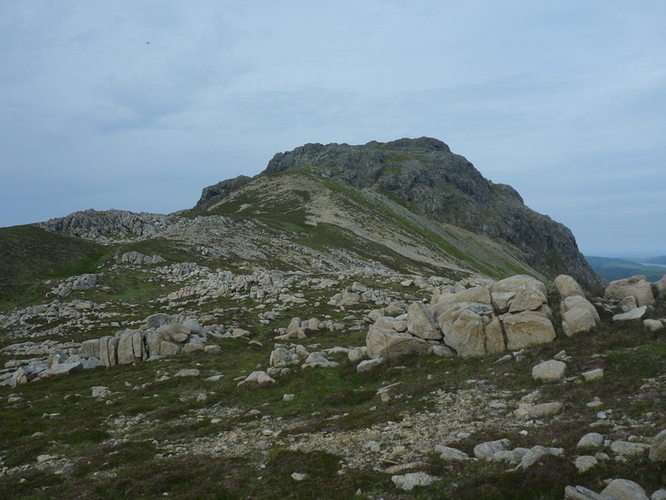 The ascent had taken longer then we had hoped, and we wanted to get a second summit in, so once we had got to a summit cairn we calculated that being above the 590m contour it was easily in the activation area although the official summit looked to be further on (it’s a long ridge). Being a long narrow ridge, Martyn was constrained as where he could put up the HF antenna. Caroline propped the VHF antenna up against some rocks. Radio conditions were not good, and we both failed to qualify on our initial bands: 3 for Caroline on 2m FM and 3 for Martyn on 5MHz. We moved to 40m and both worked the first caller to qualify the hill. Martyn scraped another 3 40m contacts including one S2S before handing HF over to Caroline on 20m where she struggled to 7 contacts, including one S2S for both of us. 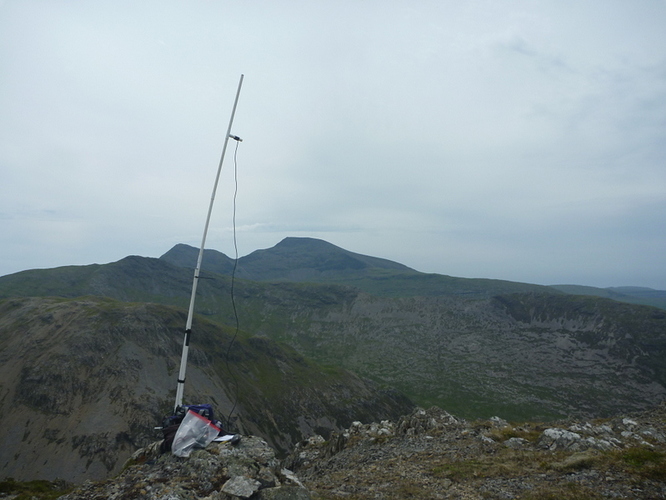 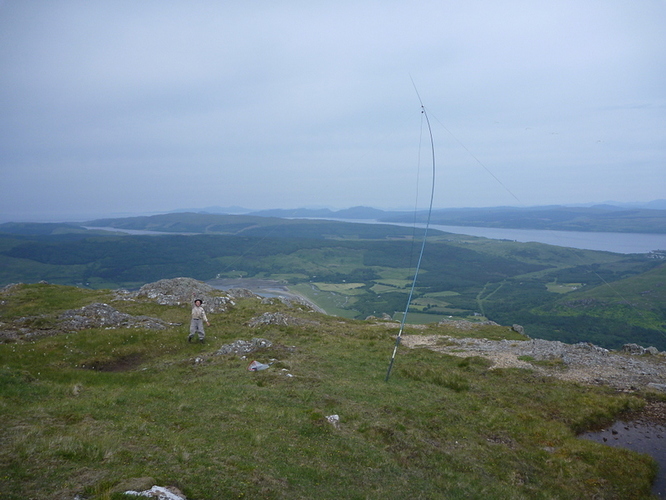 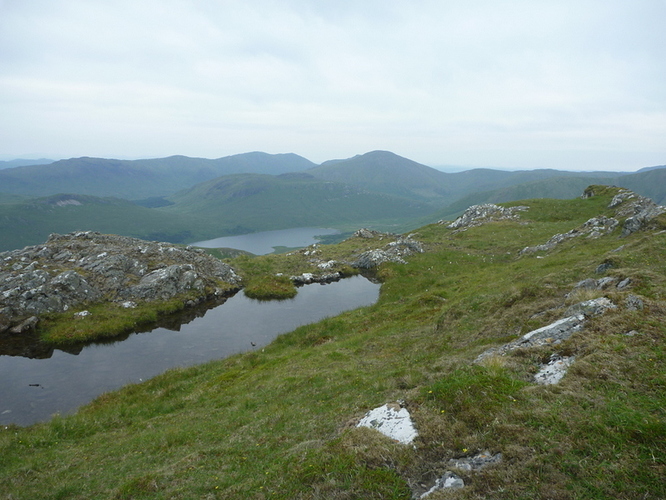 With lunch eaten we headed SE down the ridge, dropping off it southwards to the col between Beinn a’Ghraig and Beinn nan Gabhar, with a couple of little lochans on the col. We then continued roughly south, at first gently ascending and then contouring round the flank of Beinn nan Gabhar to the col between it and Beinn Fhada. From the col we bent slightly east of south to head up to the ridge running from An Cruachan and Beinn Fhada, being glad of the breeze that greeted us once we reached the ridge. From there it was a lovely ridge walk to the summit of Beinn Fhada, with views of Ben More and the hills we had passed. 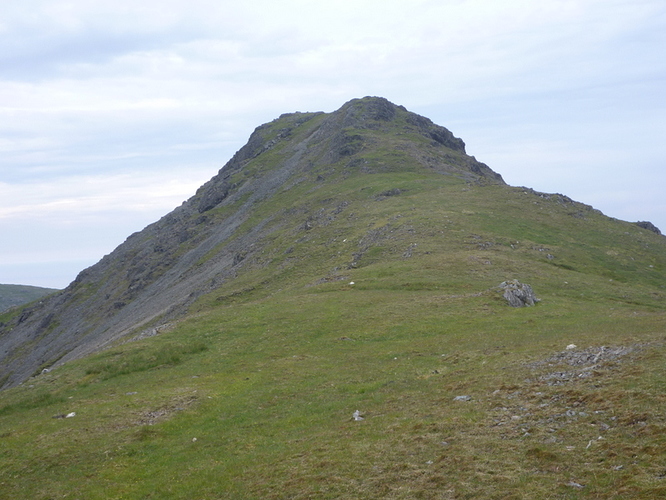 The summit was a mixture of rocks and grass with many butterflies, but they weren’t cooperating by landing for long enough to make identification or photography easy! Caroline set up the VHF antenna propping it against a rock, while Martyn had a bit of trouble getting the HF antenna up, ending it over a dip that meant it always had to drop it to change links. Radio conditions were again difficult. Caroline’s initial calls on VHF yielded only two contacts, but Martyn managed to qualify with 4 contacts on 5MHz, after which Caroline took over HF with 9 contacts on 40m. A return to 2m VHF picked up two more contacts, so Caroline did qualify on FM. Martyn struggled to get another 3 contacts on 20m. 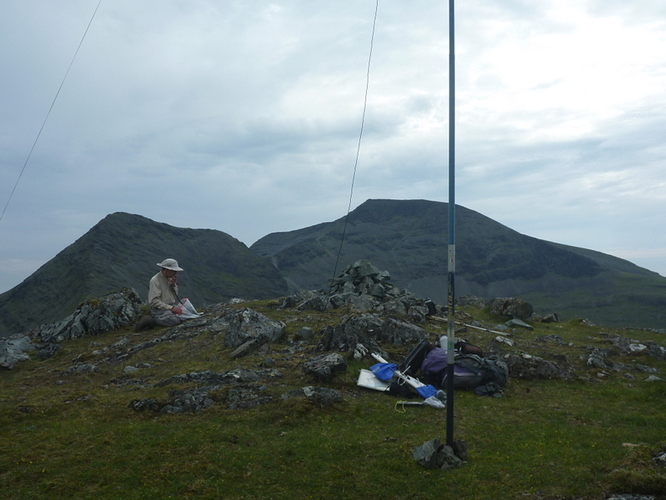 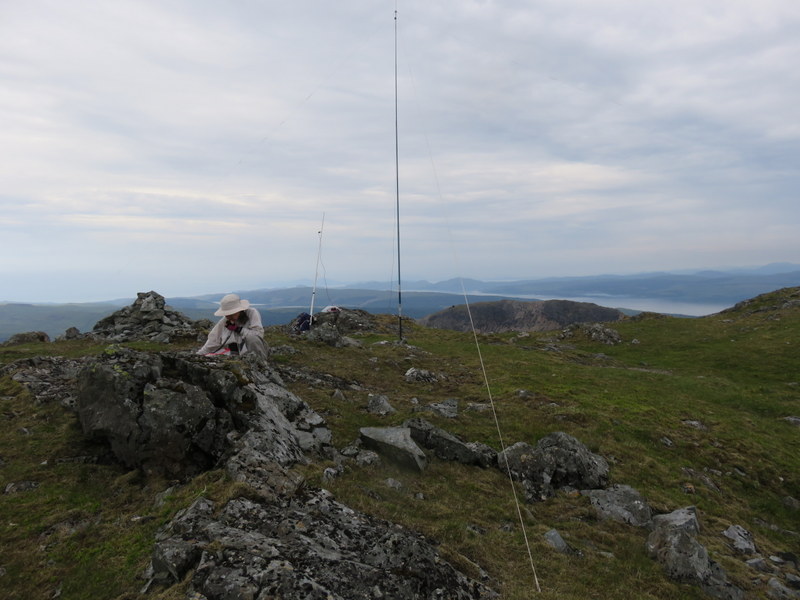 We ate our apples before heading off on the longer walk out. We roughly followed our outbound path back to the col between Beinn nan Gabhar and Beinn a’Ghraig, but then headed slightly east of north, climbing slightly to curve round the SE end of the Beinn a’Ghraig ridge, and then descending towards the smaller more northern of two lochans. We then roughly followed the stream from the lochan as it made its way down towards Loch Ba; rough ground and steep in places but avoiding the nasty scree of the ascent. 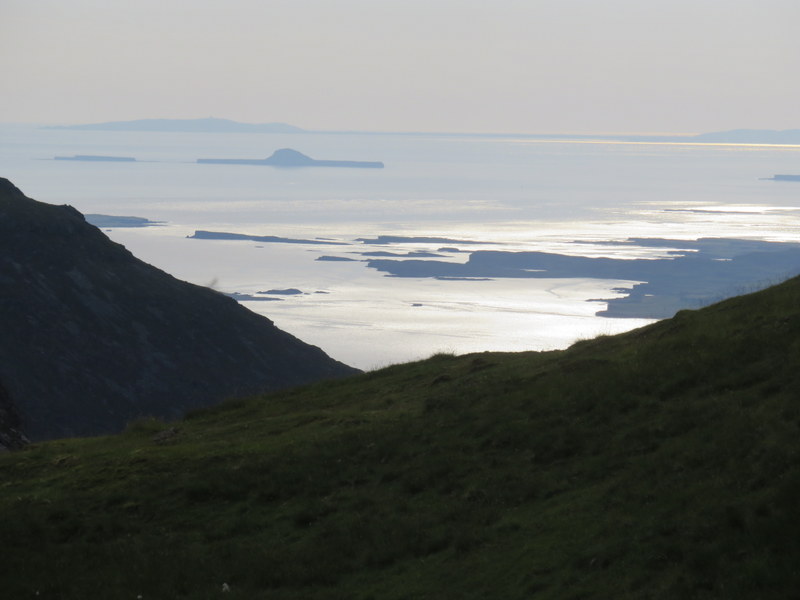 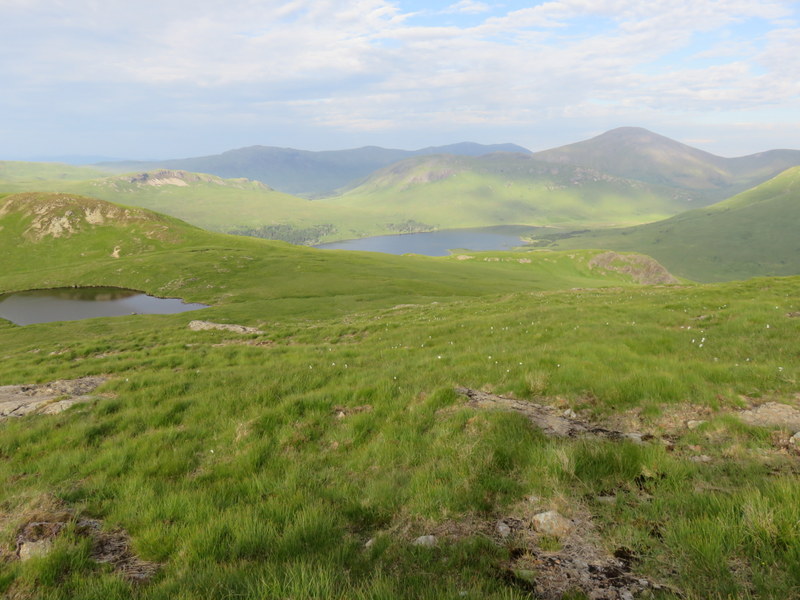 After over 1000m of ascent (and descent) we were weary on the track back to the cottage, but there was some nice evening light. Apart from the track it had been essentially pathless, and we had seen nobody else on the walk, but had seen lots of frogs and a few glimpses of hares. 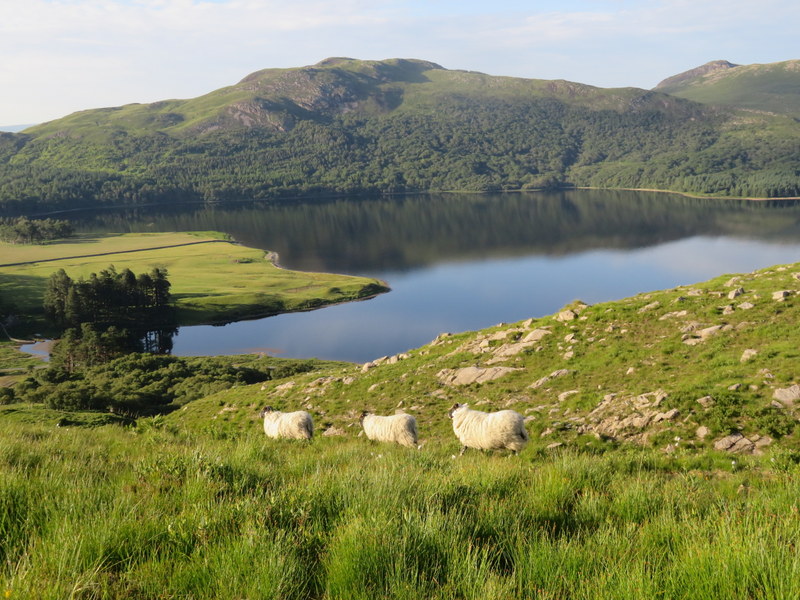 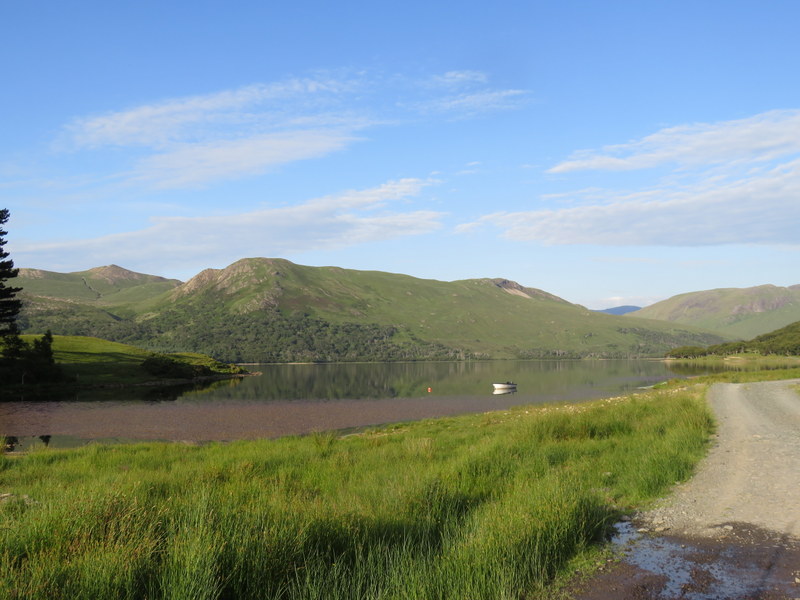 Late evening view from the cottage we stayed in towards Beinn Bheag, with ridge to Beinn a Ghraig behind. 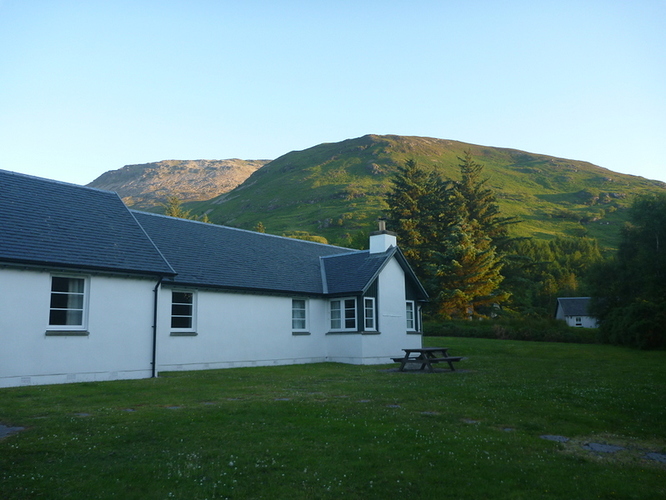