I managed to activate GM/NS-074 yesterday on the 2nd attempt. Had intended to use HF as well but I opted to save some weight as the WX wasnt too great. Visibility of 50feet and sleet which turned to snow about 500m ASL.
Today I activated GM/NS-151 again VHF only. I bought the SOTABEAM from Richard and it is really working well. Managed to pull in 10 contacts today on FM which im more than delighted with, cant wait to take it down south with a higher population density.
I will post a link to some photo’s of these summits in due course.

http://tx.mb21.co.uk/gallery/mounteagle.php
(not my website, but pics of the huge TV transmitter 240m high on this site)

Big thanks to all the guys for the QSO’s this weekend, hope to squeze in another 2 through the week.

I hope you climbed to the top of the transmitter and attached the beam, no ?

In reply to GM7GAX:
Hi there bobby, yeah there would be some take off from up there, it would be nice to have an antenna up there with a microwave link back to my shack. Its not the best at the trig point, not sure if youve been but there has been a fair bit of de-forestation with braches all over the ground and gorse bush’s to contend with, couldnt guy the pole so just stuck it in the hole on top of the trig point. Otherwise a good afternoon SOTAing.

In reply to MM6ADR:
Adrian,

Never been to the area you worked from, strictly W/NW of Glasgow my domain…
pity about a microwave link, it’s a NTL site, they wouldn’t notice any way…
deforestation is such an ugly blip on the landscape…
May work you STS one day…
On SOTAbeams, mine works a treat. Yesterday though the J Poles 4m and 2m sufficed…

In reply to GM7GAX:
Well the pics on the website that i linked to yesterday show it as an NTL site indeed, but in the pics i took they are gone, the dishes are still there although all the ntl stickers have been taken off them. So not sure who runs it now, there are plenty of antenna’s on the tower!!

It’ll be Arqiva nowadays. IIRC the BBC sold their transmission equipment to Crown Castle as National Grid Wireless and the ITV companies sold to NTL Broadcast as Arqiva. These two combined under the Arqiva name. No doubt along the way, there was much leveraging and gearing and other such esoteric financial nonsense meaning that the bosses made gazillions and now the remaining company has huge debts and needs regular handouts from the taxpayer!

The fact that you didn’t mention it makes me assume there was little QRM and breakthrough from the broadcast/comms equipment up there.

The fact that you didn’t mention it makes me assume there was little
QRM and breakthrough from the broadcast/comms equipment up there.

Hi andy, no QRM on the amatuer vhf band, didnt tune around any further than that. I heard its power output is 10Kw, on what i dont know. There are 3 other antenna towers near to the trig point although the OS maps show 2, each with stacked multi element yagis, small folded dipoles, and microwave dishes (is that the correct term??) Will try to get my Flickr page updated asap with pics.

Well there’s analog TV on ch.67 (842MHz), DAB on 220 MHz and BandII FM radio on 100ish MHz. Those things are not usually the problem. Although my old contesting group used to have a 70cms preamp that didn’t like the Band II FM on Cyrn-y-brain and needed a stub tuned to a Radio3 (or a harmonic) on its input. The problem is usually caused by all the PMR crud and cruft which grows on the masts. Nice to know you had no problems on VHF at least.

Microwave dishes is the correct term. What you don’t see much nowadays are “hogs horns”. A relic from the 50s-70s really. As a truly sad person, I’m always delighted by spotting vintage antennas such as hogs horns or Band I/Band III TV antennas. Perthshire/A93 is a fantastic Band I/III hunting ground. Up in Perth last week for Jethro Tull got me very excited at the number of Band I/III antennas on Perth’s buildings. But it’s Blairgowrie that takes the award. H and X Band I antennas adorn the buildings and there must be the biggest surving collection of Band III Yagis in the UK there. Including many installations with twin 8ele Band III yagis bayed. When you consider that 405 line TV was switched off in 1984/85 that means all those antennas are at least 25 years old. Knowing a Scotsman would never waste good money on a new antenna when it would only have a life of 2 or 3 years it’s fair to assume most of those antennas went up some considerable time before 1980. When you consider how big an 8ele Yagi is for 200MHz then either it’s not windy in Perthshire or they were made from the same metal as the Forth Bridge. (The Victorian one, not the 1964 one, that’s falling down!).

Hog Horns? New one for me. I guess it’s a circular horn?

I guess it’s a circular horn?

No, It’s an ordinary horn but then there’s a parabolic reflector at the top and a cutaway in the side. It so you can get a lot of gain but easily support the horn’s weight by bending the beam trhough 90degs. I’m sure there used to be a slack handful of them on the concrete comms tower out by Teg’s Nose. 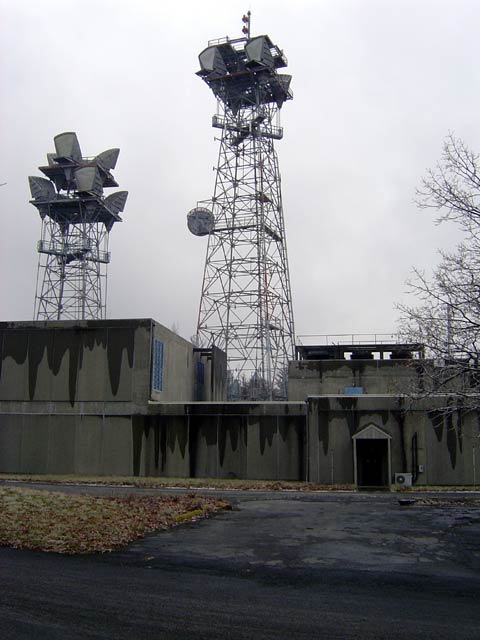 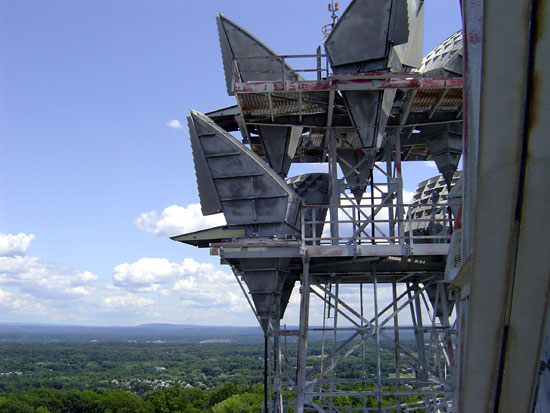 Thanks Andy. The term Hog’s Horn is not what I would call this type of antenna. I especially enjoyed the last photo as it shows two of my “radio heroes”. Their connection with pigeons is amusing.

Re Teggs Nose - there are no comms towers there; I assume that you mean the tower at Sutton Common - an occasional microwave site that I use for 10G.

Indeed Sutton Common it is. Here’s how I remember it from my youth.

I got a dusty answer when I clicked on that link!

In reply to G8ADD:
Yes you need to copy and paste the link into your address bar Brian. Works fine then.

Yes, I saw that this morning. I was a little miffed as the image has not been embedded into a webpage per se as SOTAwatch users still see it as a real link to someone’s webpages. But from SubBrit’s point of view they’ll assume that their image is being shown by default rather than when a user reads the message and then clicks on the link. The origin of the image is clear to anyone looking.

I’ll email them when I get a moment.

The fact that you didn’t mention it makes me assume there was little
QRM and breakthrough from the broadcast/comms equipment up there.

Well andy i stand corrected, i was back here today for ISW and definatley breakthrough on the HT on 145mhz, nothing heard on the 817 though, took a some footage and posted it on the youtubes

uploading another just now that appears music is coming through low down on 145mz ill post the link on this thread when its done. Shot in lovely 1080p is making it a slow proccess.