The forecast wasn’t good, with rain and cloud on the hillls. Careful inspection of the rain projections suggested that the Angus Glens might have less rain, so we decided to head towards their lower hills. Leaving Blairgowrie we went through heavy rain on the road to Alyth, but as we turned north we noted the clouds looked less threatening, and by the time we reached the junction of B roads at Dykend the rain had stopped. Our first choice hill had been Cat Law, but we could see that it was still well cloud covered. From that point there are about 6 SOTA summits not far away, so we decided to go for the slightly lower Hare Cairn instead. We parked in the large car park by the Blackwater Reservoir dam – just one other car in it and that left while we were getting our boots on.

We followed Andy MM0FMF’s route, which starts with a long private road section along the edge of the reservoir. The clouds were beginning to lift enough to give views of the hills the other side of the water. The road turned into a track meandering round the lake and faded, so we headed towards the right hand of two prominent gates in the forest fence. This led to a path which headed north through the forest, with occasional diversions to avoid fallen trees, and back out the other side. The weather was improving, and with waterproof trousers on we were now beginning to overheat, especially after leaving the forest and heading steeply uphill by the fence.

Andy’s instructions said to turn left at the fence junction on the ridge. What he didn’t say was that there was a tall deer fence with no sign of a stile to be negotiated first. We didn’t fancy trying to climb over the top, but clearly someone had earlier had the same problem and had cut a small hole in the fence. We wouldn’t get through with rucksacks on, so off they came, Caroline manoeuvred her way through, Martyn fed the rucksacks through to her before squeezing through himself. The ridge beyond was boggy in places, so we picked a line along the ridge. 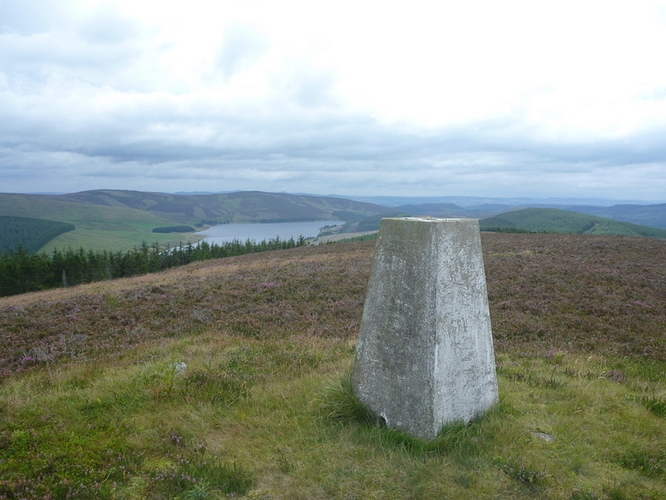 The summit itself was reasonably dry with short heather giving plenty of space for the HF antenna, and a trig point with suitable hole for supporting the VHF antenna. By now the clouds had lifted off the closer hills, with occasional glimpses of sun. Caroline managed just one 2m FM contact while Martyn found 5MHz in slightly better state – 7 contacts. Caroline needed 7MHz to qualify the hill, 12 contacts including an S2S for both of us with John GS0OOO in Glen Coe. Martyn tried 14MHz, getting only 5 contacts, in the middle of which Robert GM3YTS provided us with another 2m FM S2S. We retraced our steps, including reversing the manoeuvre through the deer fence. The walk along the reservoir was pleasant and we stopped to observe flowers and insects, but took longer than we had planned. We had hoped we might still have time to do Cat Law (now clear of clouds), but by the time we were back at the car it was clear that wouldn’t work.

Plan B was to drive across the dam, park in the car park at NO260599, and head up Creigh Hill. A little way south of the car park a track heads up Macritch Hill. Before reaching its summit we took a narrow path heading towards the col between it and Creigh Hill, eventually losing the path and hacking over slightly boggy rough ground up to the rounded summit of Creigh Hill. Visually the summit further south looked higher, but the map showed Creigh is 1m higher! A fence ran along the top, with an ancient cairn the other side: we decided to not to cross, and Caroline set up VHF by a convenient stone. For the second day running Caroline did better on 2m FM from the lower second hill, but still only managed 3 contacts. 5MHz provided Martyn with 7 contacts, after which Caroline used 7MHz to qualify the hill with 18 contacts. Unfortunately conditions on 14MHz seem to have worsened and Martyn managed just one contact – but it was transatlantic! Caroline rustled up one more 2m FM contact to make 4. By now the clouds had lifted off all the local hills, though it was still dull. We descended keeping closer to the fence to Clashindall finding easier ground and more path. By this time the clouds were breaking up and we had fine views of the sun setting in the west. A good end to a day that had started rather wet. 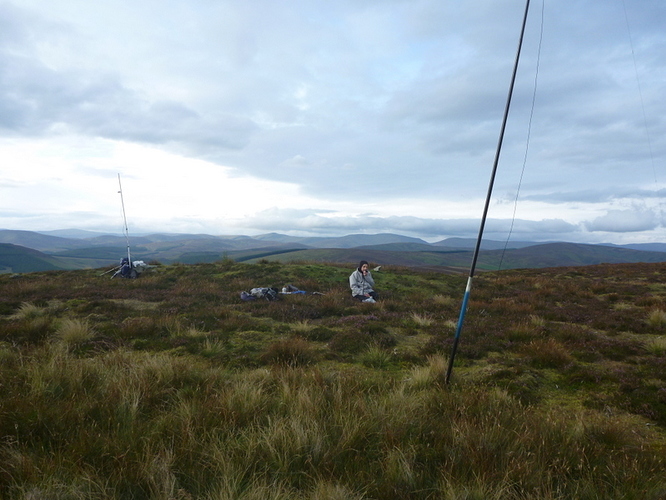 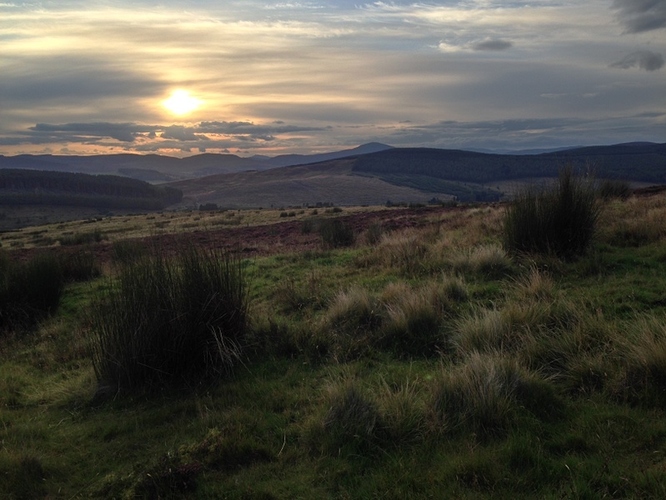 The deer fence must be new, it wasn’t there as I recall. Sadly some of the fine details start to blur after sufficient hills!

The deer fence must be new

It was new. Now it’s drilled

Actually I just had a look at some pictures/articles from a while back (not mine) and there is a deer fence and people saying they had to climb it. I’ve simply forgotten. Or maybe it was down and easy to cross and has been repaired somewhat.

I was going to remark that I hoped my reports would encourage others to go and activate these hills, so I could chase them to get the complete, but then realised that with HF conditions as they are I probably wouldn’t hear them. However Andy GM8OEG then obliged with Creigh Hill yesterday, and was was just strong enough to break the high noise levels at home for a difficult but good contact. Thanks Andy!