Meall Alvie is a mostly forested 2 pointer just outside Braemar, about 35m from my home QTH. I had previously avoided it due to the unpleasant-looking way up shown on several Walkhighlands posts. However, on perusing the posts more deeply, I found that there was a better way up rather than struggling all the way through trackless knee-deep heather like the notorious GM/ES-067 Creag Ghiubais. As per my previous activation, I did a scouting ascent a couple of weeks ago just to check access, given the recent storms.
Route up:
Park at the Invercauld Estate car park just outside Braemar. Fee is £3 for all day. On my scout trip the meter wasn’t working but on the day it was. The £3 goes towards maintenance of a toilet facility, which I did use first thing and it was very comfortable with an electric radiator keeping things warm - it was -1C outside.
From the car park, walk up the track past the sawmill and take the second track on the right just past a swampy area of the main track which has stepping stones provided at the side. This track is a bit overgrown and on the day had little streams running down both sides.

Route up1438×610 186 KB
The track eventually peters out just as it reaches a new forestry plantation area. On my scout trip a new plantation fence was being installed and this had been completed by the activation day: 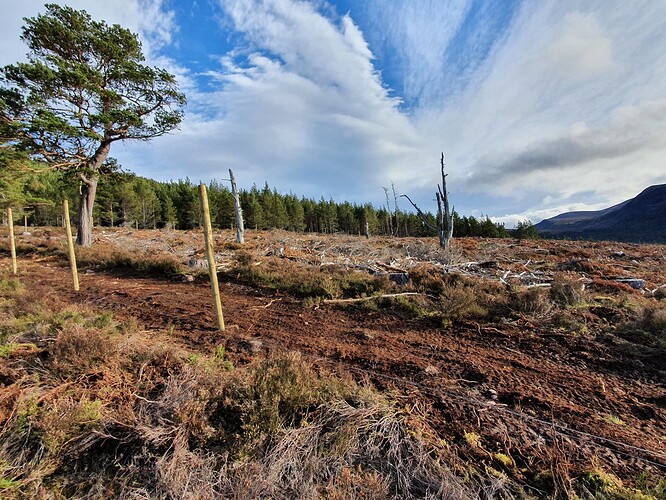 Walk straight uphill along the fence and then go up through the woods - there are a couple of short tracks bashed by forestry vehicles that lead uphill with a lot of branches underfoot, but these “tracks” very soon peter out and you have to make your way through the trees - mostly mossy underfoot and quite a steep pull.

Looking back down one of the “bashed” tracks 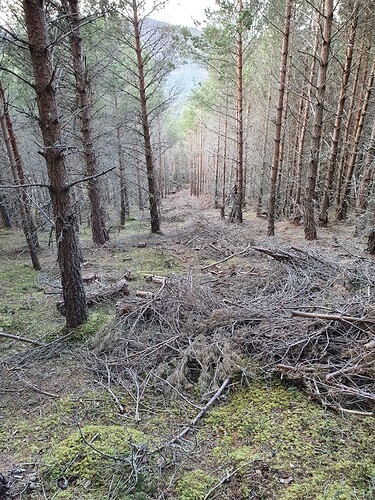 Looking up through the trees 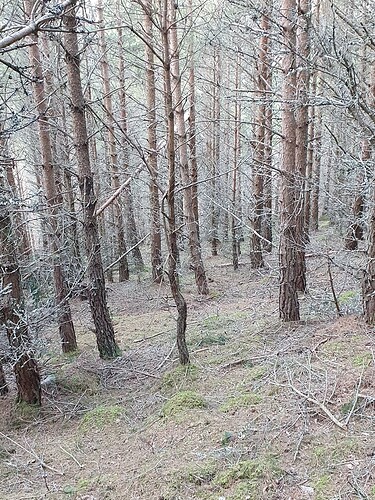 Once out of this tree zone, you come to a more open area with wider spaced trees but knee-deep heather underfoot. I also passed several large wood ant nests. 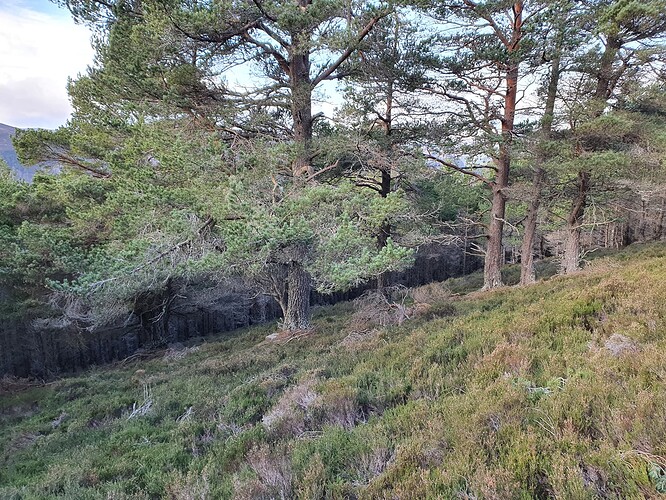 This last part is heavy going, but just keep heading up towards the North East and you eventually hit the low wall that divides the summit in two. Just follow that along until the actual top. The area on the north side of the wall is open and not too steep and that is where I set up. Small patches of snow still present with about 6" still lying next to the wall itself. It took me about 1 hour to ascend. 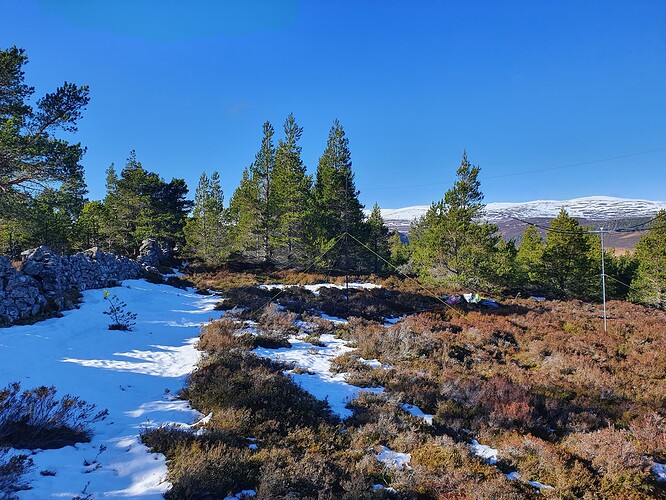 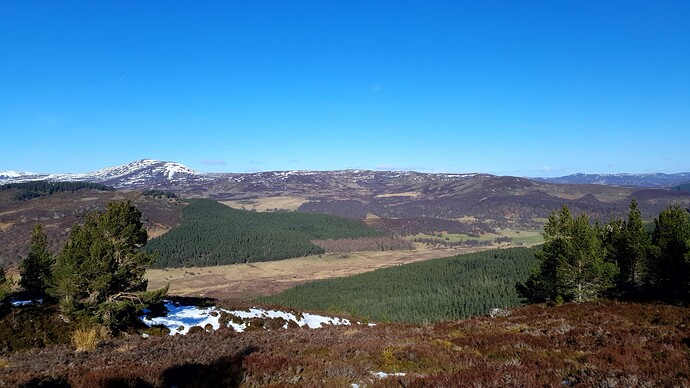 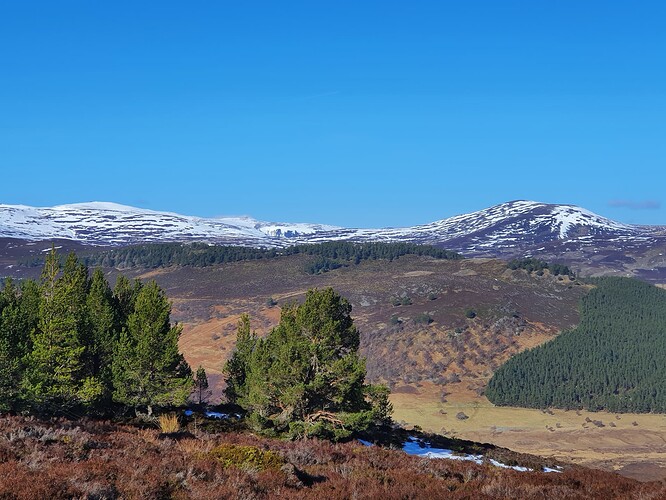 Activation
Being a glutton for punishment, I’d taken my delta loops, moxons, end fed and 2m beam. I set up the Hyend quickly and was QRV on 40m at 1009 with a S2S with MM0GOG/P on GM/SS-158 first in the log. Inter-UK signals were excellent and a spot brought a good run of 35, including a good few EU stations as well. After the pile-up dried up, I chased GW0WPO/P for a S2S.
I checked 10m and heard an A6 coming in strongly, so deployed a 10m moxon. A spot brought just 3 QSOs with Greece and Russia though.
A spot on 20m brought a run of 20 QSOs including the first of several during the day with Dinos SV3IEG. Right at the end of the pile-up of EU stations, W4KWM called in from Georgia. Notable for his absence from the chasers was EA2DT, Manuel. I think this is the first activation I have done when I have not worked him.
I then took a break to put my 2m beam together. I’d taken this mainly to try for a S2S on FM with Fraser, MM0EFI/P, who was going to be on GM/CS-008 toi the West. We weren’t very hopeful about this as the path looked rather unlikely from the Sot.Las profile Fraser sent me:

I next tried 17m, putting up a delta loop. The band seemed pretty lively and a spot brought a run of
17 QSOs, including SV3IEG for our 2nd QSO of the day, W1HI (RI), AE4FZ (NC) and AJ4EO (NC).
Back down on 40m I picked up the husband and wife team of M7NDC/P Naomi and G7WKX/P Simon (good name…) on G/LD-017 and then went back to 17m and had a nice non-SOTA QSO with WA5FWC Gar in Texas - check out his QRZ page and marvel at his antenna farm.
Another 17m spot then brought another 7 chasers, including N2BTD (NY) and KN3Y (VA). I then put up my 17m moxon to try a comparison with the loop. Results were not great - the moxon seemed noiser and signal reports from EU were well down compared to the loop. I’m not yet writing moxons off though (see later).

After that I put up a 15m loop and had a short bash on that band but got just the 2 chasers YO5MCM and R2RZ.
After chasing 2 more summits I put out a 20m spot which brought 9 EU chasers including a S2S with EA2/F5ODQ/P.
15m still seemed lively, so tried that again and had a non-SOTA QSO with ND1X (CT) who gave me a comparison report between the loop and end-fed. Loop 2 S points better. A spot then brought my third QSO of the day with SV3IEG and a presumed groundwave contact with 2M0BOO about 50 miles to the East of me.
Finally, hearing some activity on 12m, I put up a 12m moxon (no 12m loop yet, but planned). Unfortunately I had forgotten that I had not adjusted its attachment points for the longer spreaders I was using for 17m, so it was a bit floppy. Despite that I managed 2 contacts, one with SV3IEG for the 4th band of the day and actually my first 12m QSO - thanks Dinos! The other was with KJ4USV (VA) who gave me a 58 report, so the floppy moxon seemed to work OK. CQs brought no more activity, so I went back to 15m but a spot and CQs brought nothing, so I called it a day at 1533.
I was packed up and back at the car by 1730.

Thanks to all for another nice day on the hills.

Brings back memories. It’s a cracking little hill and the estate welcomes walkers. OK they charge for parking but there’s toilets that are clean. Ever ytime I’ve been there, there’s been soap, hot water, loo paper. Makes paying for the parking well worthwhile.

Nice one Simon, that looks like the same route I took up. Its a nice hill, I remember I did a quick late afternoon activation after a work trip to Dufftown. Easy 5 points!

Agreed - soap dispenser was empty though, but I guess its not really the tourist period yet.

I had that happen to me once when I was on an activation. I quickly decided if the guy wanted to determine his own report, I would agree to his terms. As they say, “life’s too short”.

Many thanks for another excellent report Simon. I wasn’t in the shack that day so I missed you, but you certainly gave everyone that was around an excellent opportunity to work the summit.

Thanks for the two S2S contacts Simon. I too was surprised we made it on 2m, and then delighted to work you again on 40m later in the day.

I may try and get up Meall Alvie before the end of this week, so there could be a Complete coming your way.

The problem is that “five” and “nine” are phonetically quite close together with the I sound predominant. For this reason a pronunciation guide I was given in another context required 9 to be pronounced NINER and 5 to be pronounced FIFE.

Depending on conditions I sometimes comply with that guide!

Andrew, the chaser gave me 57 and the band was in good shape - no QSB. He could also hear that I had not QSLd his report and said nothing about QRM at his end. I am aware of the 55/59 possible confusion, which is why I counted several times from 1 to 9. In my experience, unless a signal is being completely wiped out by QRM, counting should get the report through. To come back as he did in the final exchange with a 45? was just not credible to me, so I ended the QSO.
When chasers call me I make every effort to get a succesfull exchange in the log. I am never in a hurry as I always spend hours on my activations and a failed exchange always disappoints me. Eg Yesterday I was called by a DL6 on 17m fading in and out above the noise level. I tried and tried to get his suffix but eventually lost him.

Hi Simon,
From what you say something must have been happening in his receiver that made copy difficult. Very frustrating. I think you had no other option than to scratch the contact.
73 Andrew VK1DA/VK2UH

Of course there is always the possibility the guy is just daft and not good at radio operating. It’s not something specific to licence level either, I’ve heard hams with a 50 year history who are completely clueless on air.

“Daft” is such a kind gentle word when there are so many others that could be used.

Indeed… odd numbers were considered mandatory in my VHF/UHF/Microwave contesting days - in that case, to minimise the number of errors in the log.

In this particular case the guy just wasn’t listening and Simon could have said any numbers. My daughter’s favourite phrase when exasperated applies… “whatever”.

I followed in Simon’s footsteps this afternoon and managed quick activation. Strong winds forecast, so a summit with tree cover was ideal. I arrived at the car park at 1400z, paid my £3 and used the loo. 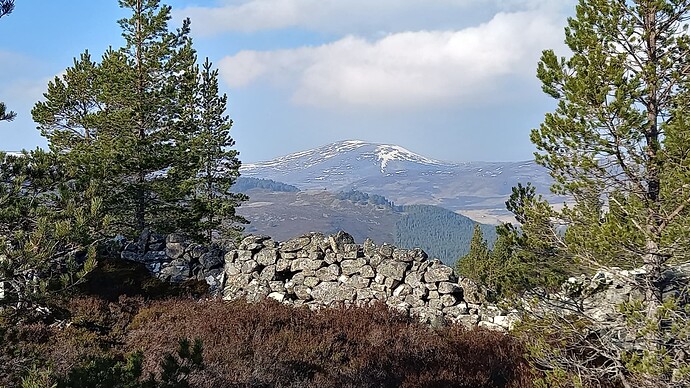 I called Simon on the handheld first for his Complete. It was marginal, with lots of lumps in our path, however we managed it once I stood on the wall.

Unusually, my W3EDP wouldn’t tune on 40m. I’ve been using this antenna without a 9:1 recently. Maybe I need to start carrying it again. Anyway I now know that I can collapse the mast, re-rig with the EFHW, keeping the mast and my operating position unchanged. The EFHW is shorter, but the 5m of coax makes up for the shortfall. 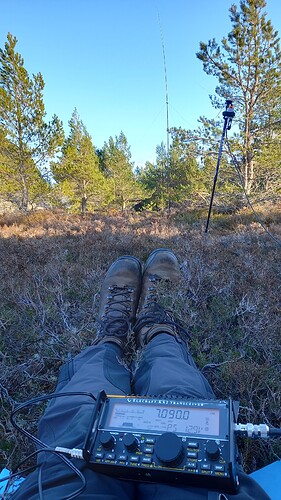 40m was tricky with the usual QRM and also QRN, but I got a few in the log, including a quick yap with @G8ADD.

I was hanging around and getting cold waiting for Ben @GW4BML getting to his summit. Thankfully he put his spot on at the same time as messaging me and I dived in for a summit to summit in front of his pileup!

1620z and I was packed up and gone, getting back to the car in around 25 mins, enjoying some spring views on the way.

Lighter nights are coming! Although, it’s still bitterly cold in the wind. 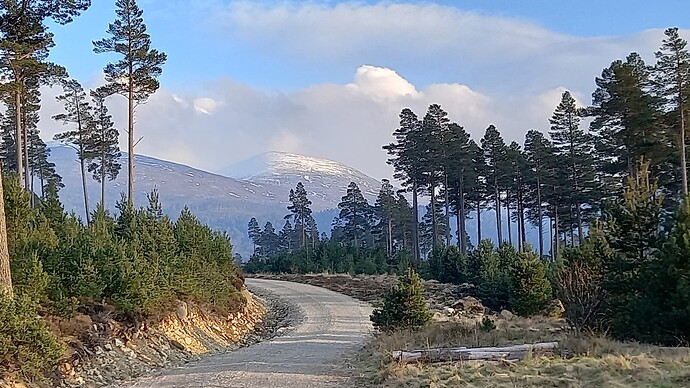 I called Simon on the handheld first for his Complete

Much appreciated Fraser. Must be my turn next for you.

Must be my turn next for you.

Alternatively- buy me a crate of beer and I’ll do you another 12 Completes.

I’m looking forward to the Lanzarote ones.

Great to get the S2S today Fraser @MM0EFI, I just finished working a pile-up on 40m before the heavens opened

look forward to the next 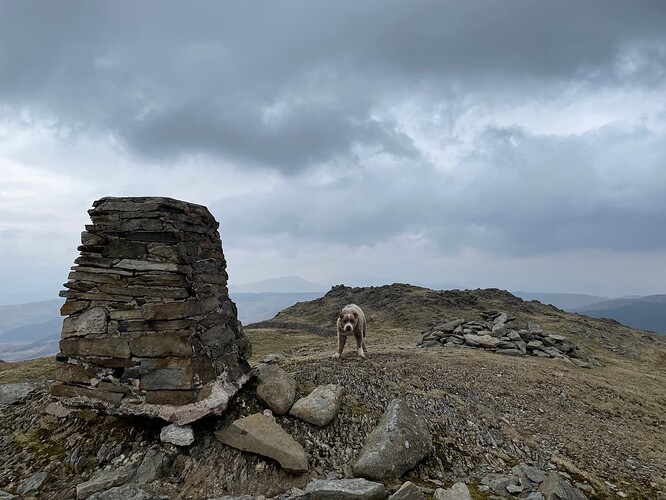 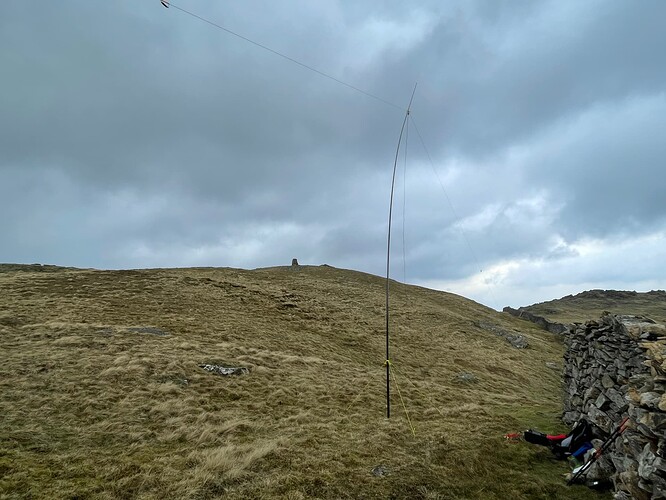 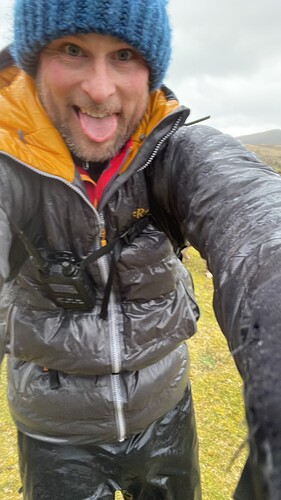