This was my first activation since the five summits I did in Lanzarote - on the day it was just as sunny as Lanzarote but 5 deg instead of 25. I’d alerted a 1000 ETA but I was a bit delayed starting out on the 1 hour 20m drive from Aboyne and then the walk up took longer than anticipated, so I was 2 hours late I’m afraid.
Driving through Braemar, my car thermometer registered -5.5C but by the time I’d reached the Glenshee ski station it was a balmy +4.5C - an impressive inversion which lasted all day. On the Badandun summit it was sunny all day, 360 blue sky, and no wind - for my first winter bonus points I don’t think it could have been easier, weatherwise.
I parked just beside the entrance gate to the Cateran Trail just down the road from Little Forter - room for about 3 cars max, so I would advise getting there early, particularly if the weather is good. 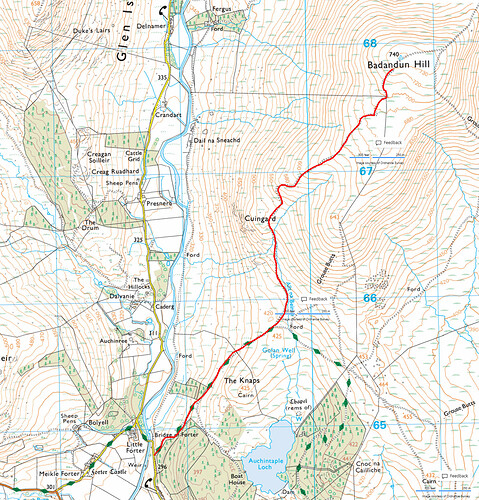 route up1440×1503 717 KB
The Trail is marked on the map with green diamonds and the track up to Badandun turns left off the Trail, just by a waymarker post: 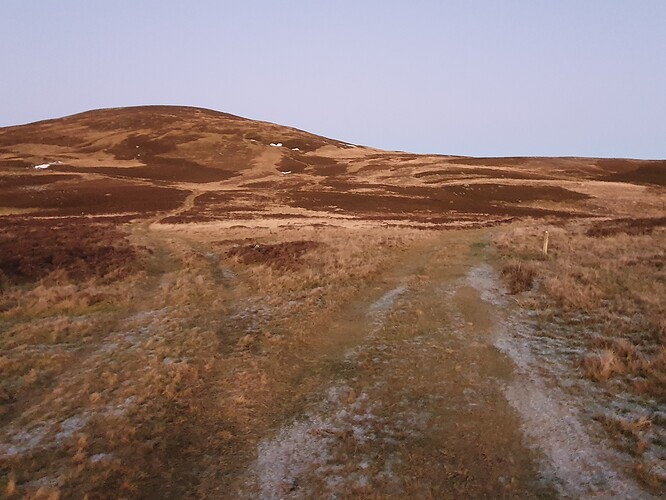 20211218_1604234608×3456 2.48 MB
Then its just a steady slog uphill on the good track which goes all the way to the top, past the trig point and down the NE flank.
While still on the Trail I had a brief chat with an estate warden on an ATV. He was carrying an impressive hunting rifle on his back but wasn’t planning on shooting anything that day. Near the top I encountered a couple looking for their dog, which they later found and brought up to the trig point as I was setting up - the lab/pointer cross was most interested in my lunch. 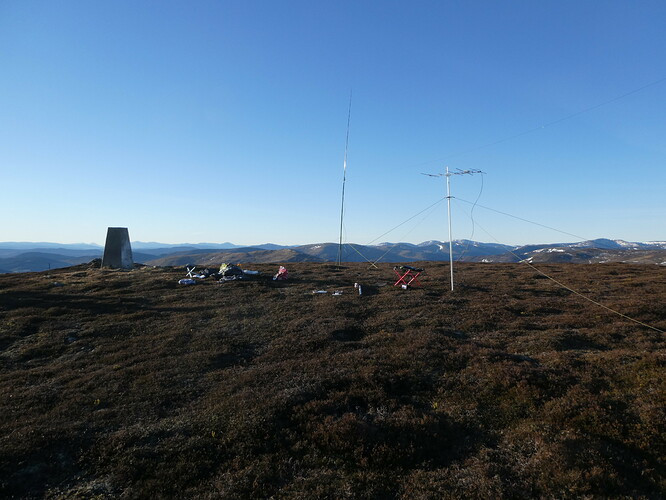 P10006015184×3888 2.91 MB
I set up near the trig point and started on 2m, thinking that the inversion might produce something interesting. 5 minutes of CQ on 144.3 brought zilch - not a peep.
I then quickly set up the Hyendfed and opened on 40m which brought 16 contacts, 1 S2S with M7BIA/P and a difficult exchange with Brian MM1HMZ whom I had met in Lanzarote. Moving to 20m I had 13 contacts including N2BTD in NY and another S2S with F/DD6DO in the Pyrenees. As expected, both 17 and 15m were open, so I took down the 2m beam and started to put up my Moxon, having made a 15m loop for it as well as for 17m.
During this set-up another walking couple appeared and came over to chat. He was retired ex-BT and commented that he used to have to deal with lots of customers who had ham radio breakthrough on their landlines. Had quite a long chit-chat and then acted as photographer for them. Humpf…back to radio.
I had trouble finding a clear freq on 17m - my first spot brought a contact with AC1Z who gave me 33 and said there was a lot of QRM at his end. I QSYd and found a clearer spot which brought contacts with K3TCU Penn, KI6EAB/W4 Fla, a S2S with HA5OT/P and finally HA5MA who gave me 59.
I then changed out the 17m moxon to the 15m one, with the first spot bringing a nice QSO (non-chaser) with AE3RM, Raul in Md. Another QSY and spot then brought US chasers K1XHX RI, AA1AC RI, KB1DK Conn and finally WD8KDB Mich who was last in the log for the day at 1438 as I wanted to pack up in daylight.
Disaster strikes
As I got up to start packing, I felt my back pocket was damp. My hip flask of malt had leaked into my pocket and also into my face mask. Actually, the mask smelled rather nice

- certainly more interesting than the other perfumed masks that seem to be available.
Views from the hill:
Looking North - very little snow left 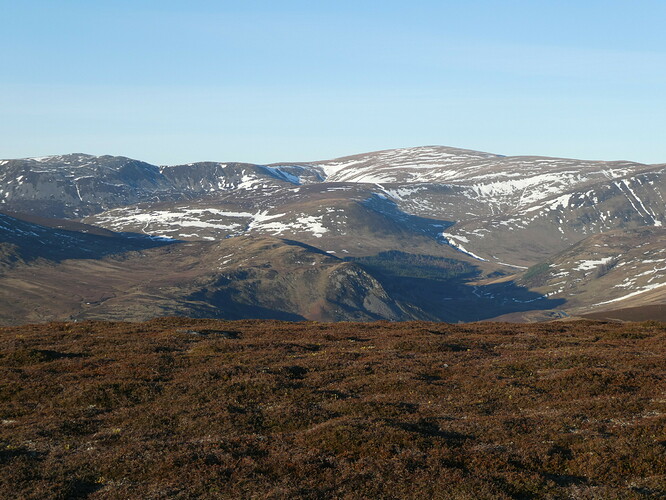 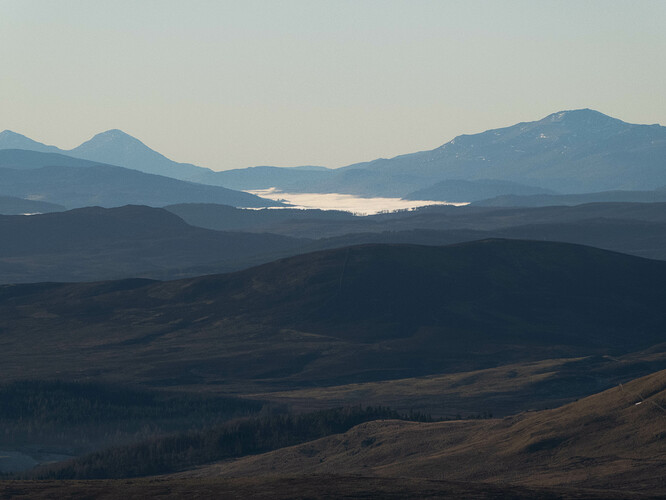 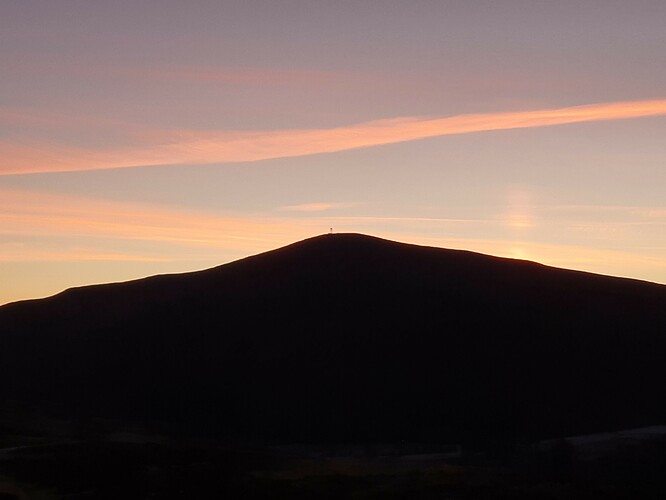 39 in the log for the day, 3 S2S and ODX WD8KDB. Thanks to all the regular chasers who showed up even though I was late.

Good effort Simon. When we went up there on Thursday there was low cloud, so thanks for sharing your nice photos. 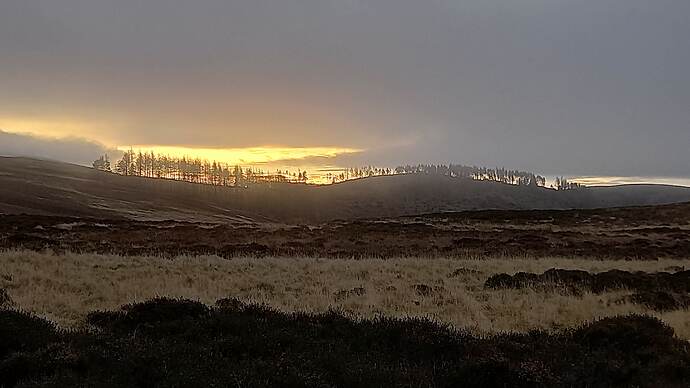 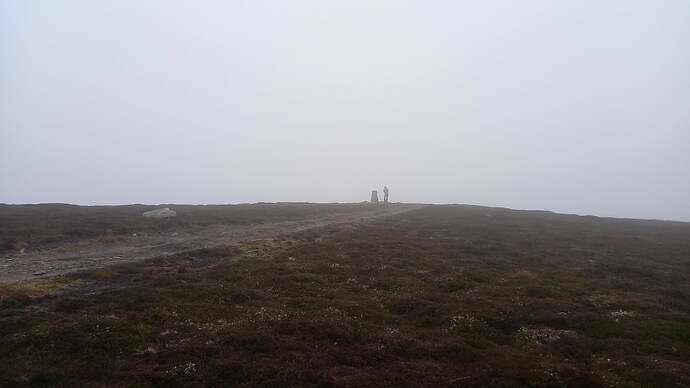 I only had around half an hour for operating, as we had to be in Dundee later that day to meet my mum. What a crazy half hour it was. A mega pile up on 40m SSB that just kept going, wave after wave! I actually had to say, “just one more call and then QRT”. I think I logged 35 contacts in 30 minutes.

It’s a great hill for SOTA though - a nice vehicle track all the way to the top and it even has an iron post to strap the mast to! 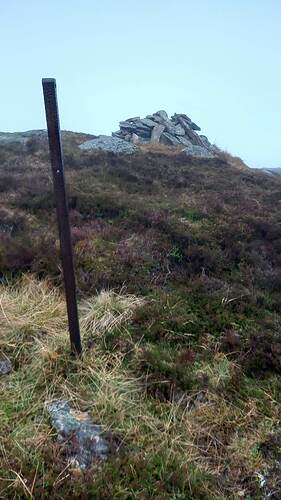 Of course, now you’ve done one of the Glen Isla hills, you’ll need to start ticking off the other three that are in very close proximity, Mount Blair being the simplest.

Mount Blair being the simplest.

Next on my list Fraser, hopefully in the coming week.

Pleased to see that you ascended Badandun the correct way and not from Fergus to the west and in from the north like I did. Not as though my route was more difficult, but it did drag on a bit - probably more to do with it being sunny, hot and humid at the time.

P./S. I warmed a spot by the fence for you on Mount Blair.

Pleased to see that you ascended Badandun the correct way

Fraser made sure I had the good route

Well I knew which was the good route… I just darn well ignored it.

The views are good! It was 100m visibility when I did it.

Fraser made sure I had the good route

Yes, I look after my friends Simon!

Yes, I look after my friends Simon!

And yes, thanks for the suggestion of ascending Mealna Letter from near Dalnaglar Castle. I spoke to a guy just as I was leaving the summit who told me the bogfest on the usual route up from the B951 is now a nightmare. A new deer fence has been erected along the side of the forest to protect the new planting and it has made it nigh impossible to avoid the bog. He was going to use the route I used for his descent and walk around the road to his car.

And yes, thanks for the suggestion of ascending Mealna Letter from near Dalnaglar Castle.

I think that may have been @GM0GAV
I did the bog both ways.

BTW did you see all the windblown trees? 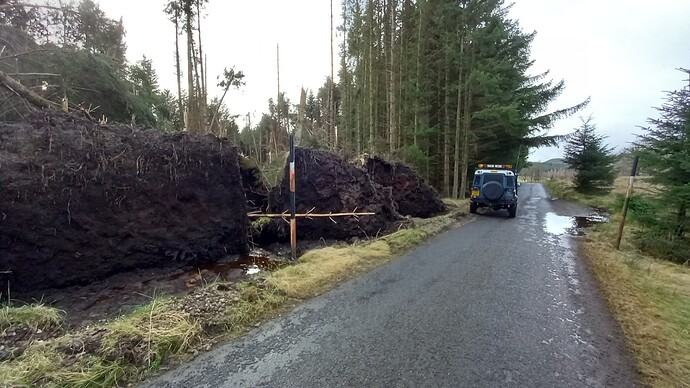 BTW did you see all the windblown trees?

I think that may have been @GM0GAV
I did the bog both ways.

BTW did you see all the windblown trees

Actually the route was suggested by your goodself, giving due credit to the originator of course.

As far as I understand it and from what I could see on the ground, there is no longer any way of QSYing from the bog unless you have a hover board.

The fallen trees had been chopped back, but not cleared. The main parking area by the side of the B951 at the Angus - Perth border where a couple of cars can be parked was blocked by the debris. The walker I met had parked in the entrance to the new planting area, so I parked on the grass verge just beyond the entrance to the east. The grass was frosty and a bit slippery, but no issue for the Quattro.