Sunday 27th Sept: 1.5 deg C at the start of my walk up, which was a tad chilly but I soon warmed up, arriving at the top just under an hour later. Blue sky, sun and hardly a breath of wind. Two walkers arrived as I was setting up - “Is this short-wave radio? We’ve met guys like you on other summits”. After they left I had the hill to myself for the rest of the day.
I started on 40m with a good run of contacts including one S2S with S56KVJ/P, then moved to 10m which opened briefly to Italy and Spain. Dropping to 20m brought another good run including 4 S2S. A check on 2m gave a contact with GC4TTA/P in IO73. Then on 20m I had my longest SOTA DX yet with VK2WWV. Just before talking to Brett I had a S2S with Craig 2M0LXX/P who was running 5w and then he also made it with Brett after I finished! 40m brought two more S2S and I finished the day with another short run on 2m culminating in a very nice QSO with OY9JD, Jon. The icing on the cake was a quick QSY to 70cm with Jon giving me my first QSO ever on that band. 56 contacts for the day, with 8 S2S. A happy man descended.

Trig point is within the stone shelter 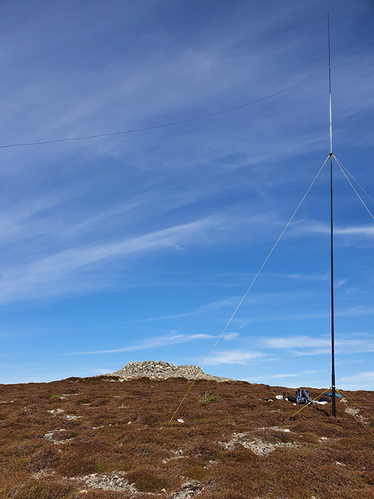 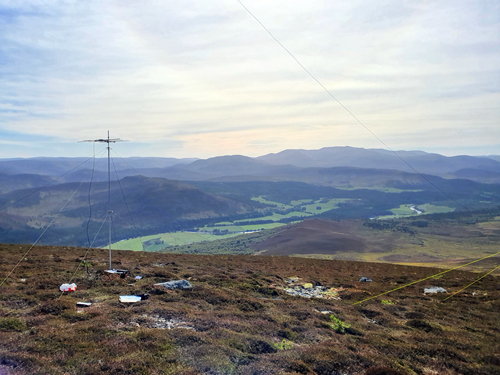 Thanks for the report. I would be interested to hear what mode you used, your antenna setup and rig. Many thanks, Mark. M0NOM

I am currently using the following set-up: Yaesu 857D powered by a LiFePo4 18Ah motorcycle battery. I generally use 40-50w and so far the battery has lasted very well. Spiderbeam 12m fibreglass mast, 5m aluminium telescopic mast based on a design by G1YBB, a HyEndfed Mini for 40/20/15/10 and a DK7ZB dual band yagi for 2/70 built from a kit supplied by Tino’s Funkshop and modified for portable use.It has 4el on 2 and 5 on 70.I’ve also built a 6m DK7ZB design al tube moxon but not managed a QSO with it yet. All contacts SSB so far - I’m back to the hobby after a 20 year break and my CW is a bit rusty but I’m working on getting my copy speed up to scratch for future activations.

Wow Simon that’s a hell of a lot of equipment to lug for an hour. You got a team of Sherpas with you? It’s no wonder you felt warmer by the time you got to the top.

FT-857 is a wonderful summit rig once you have arrived!

Thanks for the info! Mark. M0NOM

No sherpas, but my daughter did come with me up one hill and carried the al mast but she left me to it after an hour or so. I’ve reduced the load lately and haven’t bothered with the Spiderbeam mast on the last few activations. Each summit provides a learning process and new ideas, with the occasional “doh!” moment.

Glad to have just stumbled across your post, thought I would finally make an account here to reply and stop lurking! Thank you for the QSO on that lovely day we got for activating and congratulations with your DX, it was in fact your signal I had found again before realising the other side of the QSO was with VK.
Always enjoy seeing photos of the activations I have made the S2S with. Hope to catch you again.

Seems a long time ago now, as I sit here in lockdown looking out of the window at the snow. Hope to meet you on the bands again when things relax,