After our late arrival at the holiday cottage in Blairgowrie we were late up, so wanted to find some relatively close hills. The forecast was for cloud on the higher hills, but with some sunny intervals, and the slight possibility of showers. We decided to head for Mount Blair with the option of Meall Mor to its south if time/weather allowed.

We parked in a rough area just off the road at the edge of the forest at NO156643. As we were getting ready to set off another car parked near us, and the older lady walker asked about the route to the top, and we chatted for a bit. We then set off east along the road to the high point where a gate led to a track which headed up the hill. The track faded in places soon reappeared and became more defined later on. We got reasonable views as we climbed steadily, but the higher hills were cloud topped. The summit is dominated by a permanent antenna installation which dwarfs the slightly tatty trig point. There’s also a rather fine almost circular shelter which is topped by a fine engraved steel toposcope. 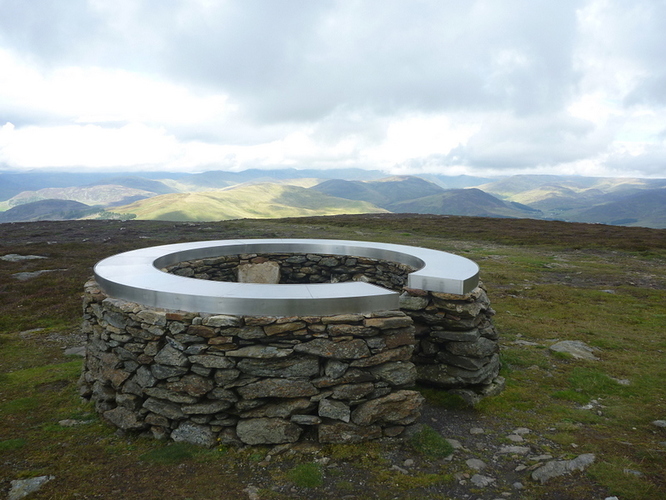 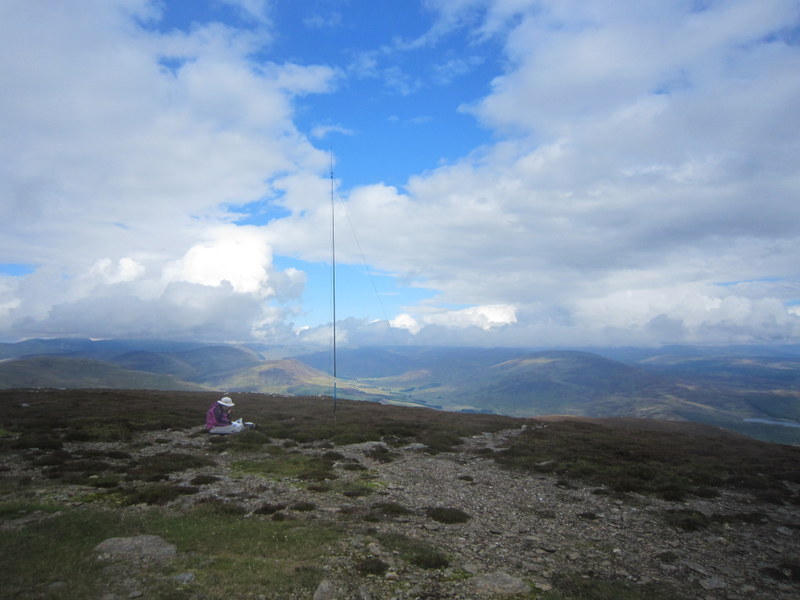 Despite having heard that this was a popular hill we had the summit to ourselves. However the presence of steel on the shelter suggested it wasn’t a good place to prop up the VHF antenna. However the trig point did have a suitable hole so was used to support the VHF dipole, while Martyn set up the HF dipole to the east. We both struggled with our initial band – despite the prominent position Caroline only got 2 2mFM contacts and Martyn struggled to 2 on 5MHz. Having noted that Andy GM4OEG was on a summit we moved to 7MHz to make the S2S. 3 each, so having found our own frequency we both worked the next station to qualify the hill before Caroline took the rest of the 40m chasers – 18 contacts in all – a reasonable run. Martyn wanted a few more so tried 14MHz to get 7 more contacts while Caroline raised one more 2m FM contact. It was a pleasant spot, but we had to leave if we were to get Meall Mor in too. As we packed up we noted that the older walker hadn’t made it to the top, despite us having been there for almost 2 hours. As we started our descent we met her still on the way up – she said she had been taking it easy with stops on the way. We encouraged her with the news that the trig point was only just out of sight and there was a toposcopic shelter to rest.

We drove round Mount Blair via Glen Isla to get to the parking for Meall Mor – there’s room for a few cars to pull off the road at the start of the forestry track at NO173613. We headed along the forestry track to a junction at NO174610 where we headed uphill to a gate out onto the open moor. We continued on the track briefly to get better views down Glen Isla before heading SW towards the ridge of Meall Mor. The slight drizzle started turning into rain, so we stopped to put on waterproofs and rucksack covers. After a steeper section we had a wall corner to negotiate before heading along the ridge wall. As we approached the summit, we realised the cairn was on the other side of the wall, necessitating a slightly awkward crossing. The rain had now reverted to occasional drizzle. Caroline propped the VHF antenna up against the cairn with Martyn’s dipole to the north. Despite being lower than Mount Blair, Caroline had 5 2m FM contacts within 10 minutes, while Martyn qualified the hill, just, with 4 5MHz contacts. We had time to improve the QSO count 12 7MHz contacts for Caroline and 6 14MHz for Martyn. As time went on the clouds lifted giving better views. A nice pair of not too demanding hills. 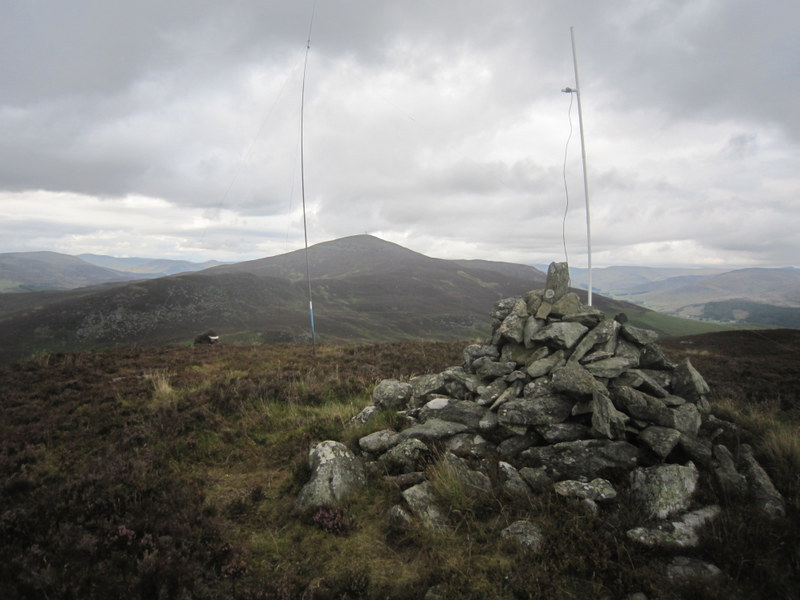