As the high pressure was still with us, I followed up my Saturday activation of Badandun Hill with Mount Blair,which is the next hill South, on the following Tuesday 21st Dec. On Monday night the Met Office forecast improved from fog all day to sun, which was how it was.
Driving towards Glenshee the temperature kept dropping until it hit -10C south of Braemar, rising again to about -6C at Glenshee ski station. I parked in heavy mist at the usual starting point on the B951 just past the sign for Angus. The fallen tree debris reported by Gerald G4OIG last week has now been cleared from the layby. I was surprised to find another car there already, with a chap just setting off with a backpack and walking poles.

route up1440×658 323 KB
After a short walk along the rather icy road, I climbed over the gate (gingerly, given my bulky backpack) where the path up starts. I could see the other chap ahead of me. The very start of the path up is annoyingly boggy and churned up by beasts and whilst mostly frozen, I made a slight detour to avoid sinking into the worst spots. Apart from that, it was a steady plod to the summit, with a second gate en route which can be opened. On the steeper bits I took to the heather, as ice made the stonier parts of the path occasionally slippery. Once through the gate I was above the mist but not yet in sun as that was still behind the hill.
I arrived at the top a bit earlier than forecast and set up in glorious sunshine, with 360 blue skies. Considerably colder than Saturday though, with temperatures staying around -5C all day with not a breath of wind. The sweat-soaked tee-shirts I took off after arrival were frozen stiff in about 1 hour.
As I was setting up, a lady and her young daughter arrived and took some videos of the hills poking through the mist. Later on another YL appeared who recognised me as having been on Badandun on Saturday - fame already

Activation
I started with the Hyend fed and being QRV a bit earlier than my alert, I pounced on a couple of S2S on 40m to begin with - F5LKW/P and EA2DCA/P. A spot then brought a very satisfying pile-up, with 40m in good shape and lots of 59/59 exchanges. With 40 QSOs in the log, I picked up another S2S on 40 and then had a listen on 10m, which was open to VK! I put my 10m Moxon up as fast as I could but by then the opening had closed and the band was quiet. Very frustrating, but hopefully signs of things to come.
Moving to 20m brought another pile-up and 26 in the log, including 4 more S2S and best DX so far SV2HJW. Back on 40m MM7PWO was another S2S and then I tried 10m again but only managed one QSO down in the noise with GM6ZAK.
I switched out the 10m mox for the 15m and picked up 6 more EU in the log, with OE6GND giving me a comparison report between the mox and the Hyend - 59 for the mox and 59+10 for the Hyend.
I briefly brought out my key to pick up a S2S with HB9CEV/P on 20m - I don’t think my sending was improved by my gloves. Back on SSB for a few more S2S including Bill GW4WSB/P, then tried 15m again which only produced the one QSO with SV2HJW again.
I briefly went back to 40m to pick up another S2S and unfortunately heard some poor and impatient operating. One station kept calling repeatedly over the activator, which is obviously poor operating, but then others joined in shouting at him and also commenting amongst themselves, causing more QRM. It took me about 10 minutes listening and waiting before I could call and make the S2S contact in relative peace. If I can do that, sitting on a hill in -5C, why can’t others? Have some patience, please. Rant over

Operating position: During the day, ice was falling regularly off the comms tower 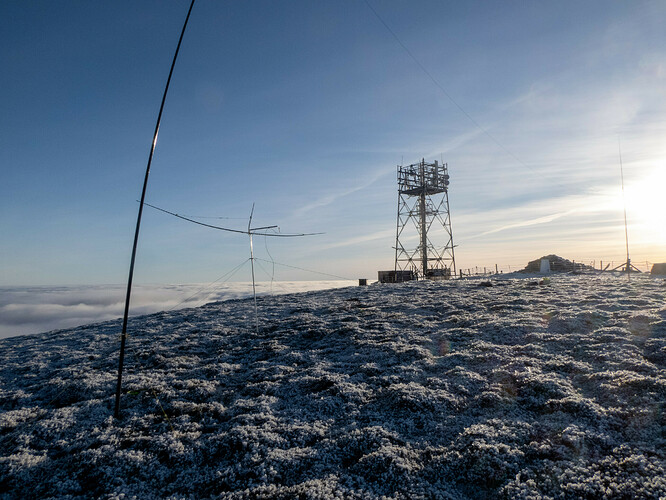 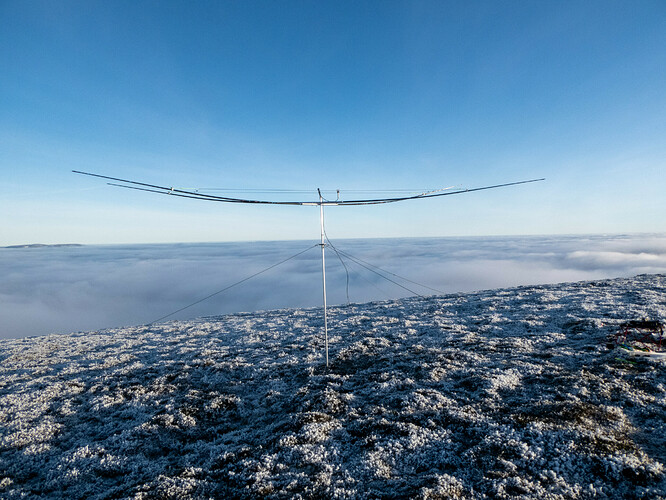 Moon still up when I arrived at the top: 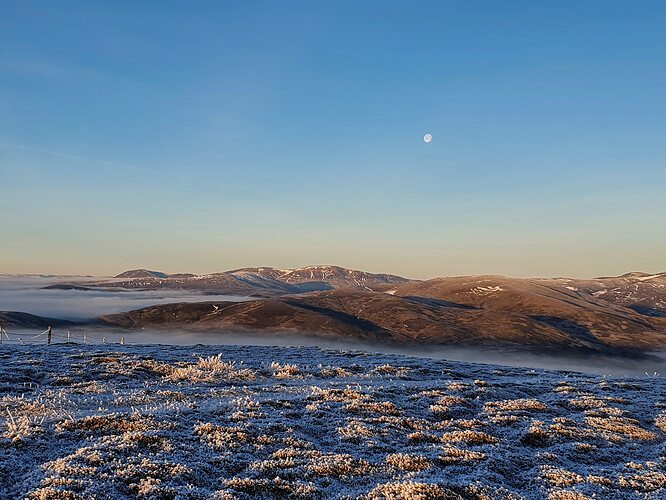 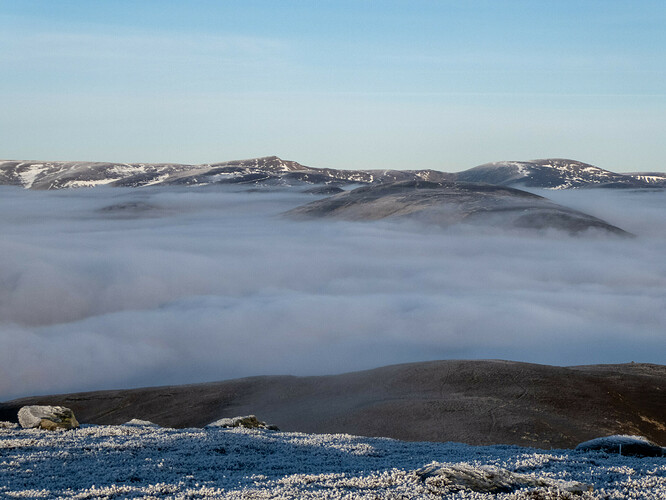 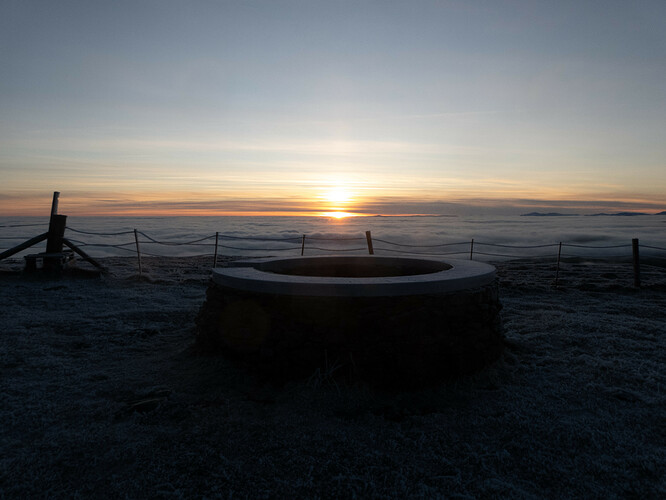 I really was annoyed to have missed you on this one Simon. It certainly looks considerably colder than when I was there on Friday and I see from your comments that it was minus 5C. Looks like I got the better deal. You can confirm when I’ve posted my report, a bit later today.

Hopefully catch you soon. Have an enjoyable Christmas and New Year.

That’s an impressive number of QSOs. Many thanks for the report and photographs. I was hoping to be on a hill today but circumstances intervened. I hope the current good propagation conditions persist for a bit longer - our weather forecast is poor for the next week or so.

The Glen Isla hills seem to be Scotlands most popular hills of late! I did contemplate attempting them all in a day but never found the time to do it. Maybe too many ups and downs for one day!

Hi Simon, thanks for your fine report and photos. 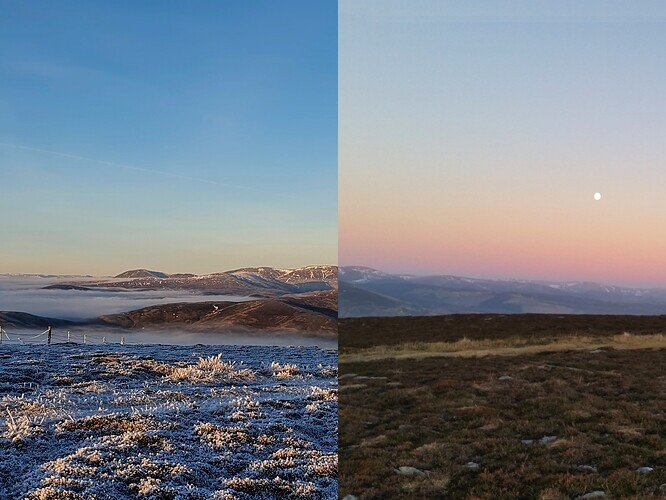