I had intended activating Mona Gowan a few weeks ago, but postponed due to wind. Its a 749m 4 pointer 30 minutes drive from my home QTH, with a good ATV track all the way to the top.
Route up

2 routes up, shorter second from near Birkford1430×608 256 KB
Walkhighlands describes 2 routes up - blue and red above. I chose the red route as it looked less steep and there is well-documented parking in a layby close to the start point. The track winds through a forestry plantation before coming out of the trees into open moorland, where there is a gate. I think it would be possible to drive a normal car to the gate, where there is a wide area that could be used for parking. I didn’t see any “No vehicles” signs until the gate and you would save a 20 minute plod. The ATV track then continues to the top - no chance of getting lost.
Activation
I set up in the lee of the large summit cairn, which offered reasonable protection from the strong breeze. As showers were forecast I put up my tent. Most bypassed me until I was packing up, so I was quite lucky. Antennas: delta loops for 20-10m,Sotabeams linked dipole for 40m, 5el yagi for 2m. 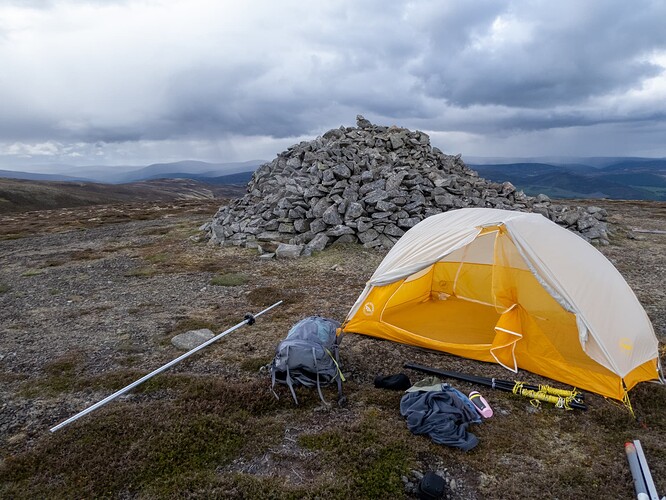 P10007421920×1440 312 KB
I started on 40m which was in better shape than for my last couple of activations - 22 in the log, with a good mix of GM (including Brian MM1HMZ whom I met in Lanzarote), G and EU and one S2S with M0PJE/P.
20m then provided 16 EU chasers including a S2S with HB9EVF/P.
I then saw a spot from Fraser, MM0EFI/P, up on GM/CS-015 and I hurriedly put my 2m yagi together for an FM S2S, with good sigs both ways.
10m was open to the Mid-East and EU and a spot brought 3 EU chasers but no DX.
Dropping to 12m a spot brought 2 EU chasers.
15m proved to be the best band for DX. Hearing JA7GFN calling CQ I had a non-SOTA QSO with Kazuo, who gave me 51-52 and was ODX for the day at 8876Km. A spot then brought an interesting mix of EU, GM local, RA9YK in Barnaul and W9MDG in Illinois.
17m produced 5 EU chasers and no DX.
10m was still open to Mid-East but a spot and a lot of CQs brought just the one chase from a local, GM4KJQ.
With the GB3NGI beacon coming in I tried 2m SSB and got 2 contacts - Mike MM7MWL (local) and Steve MM0XPZ in Glasgow, both of whom I’d worked earlier on 40m.
Final session of the day was on 15m which was full of Asian DX ( JA, HS, HL, YB). A spot brought another QSO with RA9YK and then just as I was thinking of going QRT, Peter WB6POT called in from San Jose Calif for my furthest West contact of the day and last in the log at 1559 local.
15m QSO map:

15m QSO map938×440 104 KB
As I packed up a heavy shower finally got me and the rain continued off and on during the descent, which was unfortunately marred 5 minutes in by a sudden pain from my left MCL. What should have been a relatively quick return to the car turned into a gritted teeth slow limp marathon. It took me longer to get down than going up and boy, was I glad when the car came into view. No more hills for a wee whiley I’m afraid 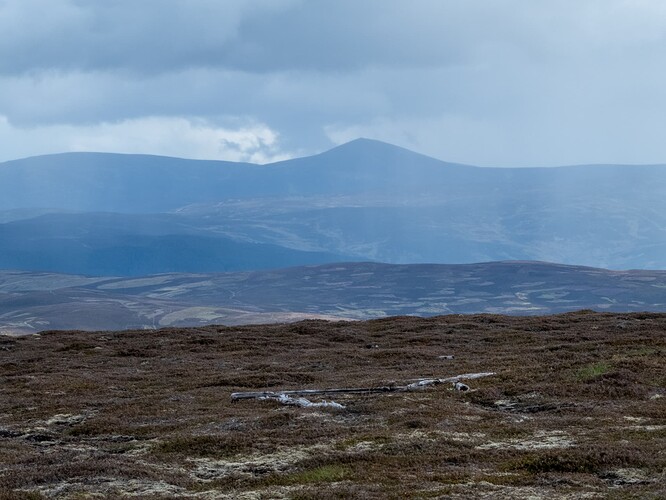 Looking North, through showers and a rainbow 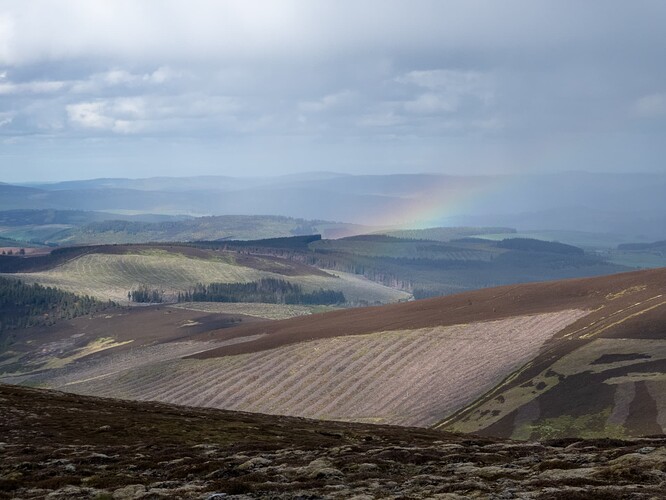 marred 5 minutes in by a sudden pain from my left MCL.

Really sorry to hear this Simon. Hope any damage is temporary and not long-lasting and that you’ll get back activating very soon. Thanks for the two QSOs, esp the 2m SSB - my first. Go easy. 73. Mike

Hey, great! Always nice to be a first

Knee isn’t great but I have a good physio.

Thanks for the Summit to Summit Simon. That’s another Complete for me.

That last photo looks like a water colour painting.

Many thanks for another excellent report Simon. Unfortunately missed you on this one due to family commitments. You’ve provided more very useful information which I must extract for when I get back up north again. Having the track access makes it a serious winter bonus possibility, depending on how the weather goes next winter. All I need now is TIME to come my way!

Thanks for the S2S, the only one of my trip up north!

I left the link dipole in the car because the forecast was poor and i was only planning a quick 2/70 activation, but as the weather was ok I thought I’d give the “emergency EFHW” a go. Wish I’d taken the link dipole up after reading about all that DX you found.

It seemed to me that the majority of other summits were on CW on 30 and 60 and I wasn’t QRV on those. Knees seem to be my achilles heel (haha) at the moment. Hopefully should be better in 2-3 weeks.

Gerald, in my experience it can be a windswept hell hole of icy spindrift in winter. Mo and I have failed on it a couple of times and once had to take to the bothy bag for lunch. The drifts were knee deep across the track and the ground was moving so fast it was disorientating!

I’d go early season and on a calm day if I were you. Let us know you’re coming and we can check it out.

Many thanks for the warning Fraser. Getting up your way is very much weather dependent anyway, so I’d definitely be looking to avoid snow if at all possible. Wind is another matter of course… Simon’s use of his tent highlighted that it wasn’t exactly Mount Pleasant.

I’ll certainly let you know when I’m headed up your way. Unfortunately I’m very much handicapped by other commitments at the moment, but at some stage I will be able to escape!