The forecast was for a mostly dry but cooler day. Our targets were the two SOTA summits to the west of Glen Isla, which looked to be a challenging round. 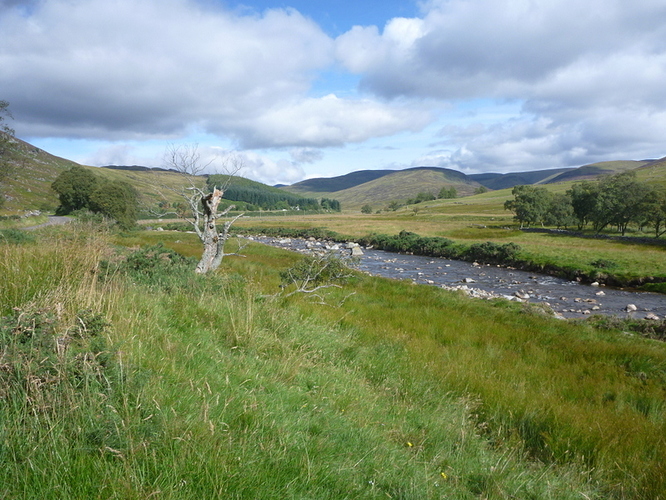 A walking guidebook we had suggested there was parking at the end of the road, so we drove to the end, but the obvious area for parking had big signs saying no parking, and an arrow pointed us down a narrow lane,which we followed, only to find it lead down to a flooded track. We reversed awkwardly back to where we could turn round, and headed back down the single track road to NO190684 where we found space to pull off the road on rough ground next to the track leading to Fergus cottage. The sun was beating down and we were soon getting rather warm as we headed north back up the road, taking the track past the farm and up along the side of the Glack Burn. We saw several roe deer in both the glen and as we ascended. The well made track gained height reasonably quickly, but when it turned south we had to leave it to head along the edge of the fence towards our first target Monamenach. There was little evidence of a path, and progress over the rough heather rocky ground was slow. There was also no wind, and the midges started attacking as we slowly picked our way upwards, and it was a relief when the gradient eased and a slight breeze appeared. We headed up to the rounded summit, marked only by a small cairn near where a line of leaning disused fence posts crossed the top. It had fine views all round, especially of the impressive cliffs on the Munros to the north. 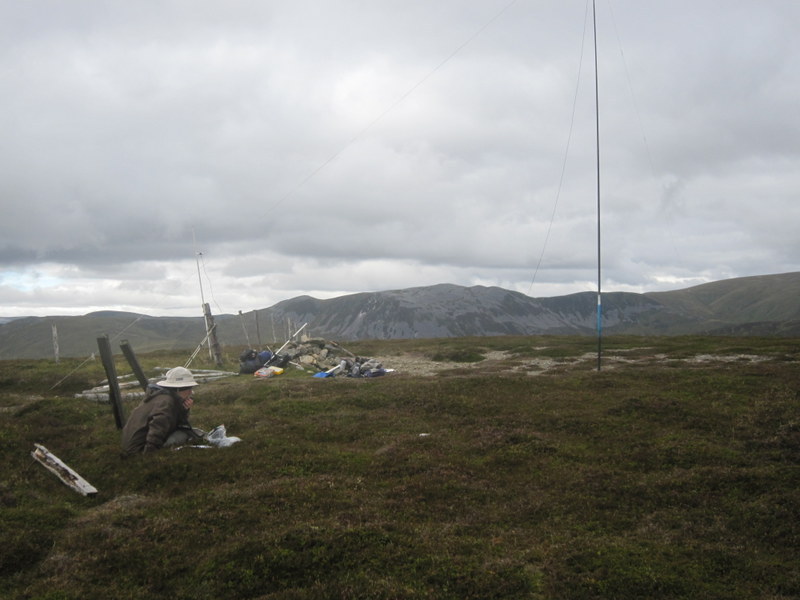 There was plenty of space for HF, and Caroline set up the VHF antenna using one of the leaning fence posts (but with the antenna more vertical than the post!). Martyn struggled with 5MHz, but did manage to get the necessary 4 contacts, which was two more than Caroline on 2m FM. 7MHz came to her rescue with 10 contacts, and final calls on 2m FM added one more. For most of our time at the top there was just enough breeze to deter the midges, but they soon re-appeared whenever the wind dropped. Martyn tried 14MHz, but got no more contacts so was just left with the minimum.

If we wanted to get the second summit in we needed to move on, and still weren’t sure we would have time to do Mealna Letter (Duchray Hill). We headed along another disused fence line and over Craigenloch Hill, getting views of Mount Blair which was to become a feature of most of our walks! Descending Craigenloch hill we left the fence line to head over rough ground with tussock grass above Loch Beanie. As we picked our way we spotted a small rodent – dark probably about 4 inches fairly cylindrical with no obvious tail (though it could have been hidden in the grass) – it darted ahead of us for a bit, but we weren’t able to identify what it was. We then headed back towards the fence which was now fully formed, observing the gate we would need to use to return down Glen Beanie after we had been up Mealna Letter.

We pushed on following the fence line uphill, there were only fleeting signs of animal paths, but the terrain was not too difficult. Nevertheless we were glad when the gradient eased, but there was another corner to turn for the final ascent to the summit. The rounded grassy summit has a small cairn a little way from the fence, but we stayed closer to the fence, which Caroline used to support the VHF antenna. A brief shower passed over but it otherwise stayed dry. Yet again Caroline did better on 2m FM on the second lower hill, getting the 4 contacts in under 15 minutes. Martyn found 5MHz somewhat improved and got 15 contacts. We did just have time for Caroline to improve her QSO count with 13 7MHz contacts in 15minutes. 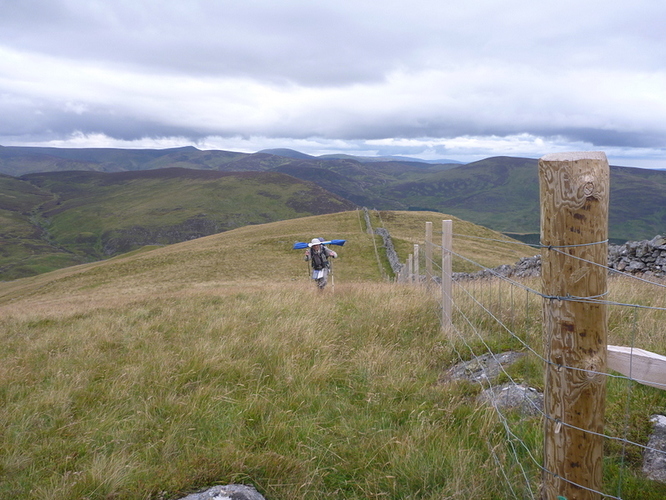 We were later leaving the summit than we had planned, and had quite a long walk out in slightly unknown terrain. At least the descent to the gate was retracing our steps, and once the other side we found a rough track heading down by the stream, but it was heading on the west side of the stream and we needed to be on the east, so we crossed over and tried to find the track on the east side marked on the map. Having made slow progress on the rough and sometimes boggy ground we finally located the track a little higher on the hill, and could make faster progress, passing through several deer gates and along the edge of forest. Past the end of the trees we turned left, and discovered that we had some steep re-ascent that we hadn’t bargained for late in the day, but this quickly brought us to the top of a heathery spur, with a track winding its way down into Glen Isla. We didn’t have too long to take in the views of the low sun on the other side if we were to be back at the car before needing to deploy head torches! Rejoining the road at Presnerb we then marched north. Despite the fading light Caroline spotted a common lizard in the road. It seemed reluctant to move from where it might be run over (probably too cold for it), so we carefully moved it into the grassy verge.

We were back at the car while it was still light, but only just. It had been an exhausting but good day on the hills.

My word, you did make that into a difficult route!
You should have been able to park on the verge opposite Auchavan, cross the cattle grid and take a well formed path to the beallach and the final trudge to the summit - after that you were right gluttons for punishment!
Duchray Hill is readily accessed via the track which starts at NO187661 (excellent parking) leading to the wall you followed to the summit and a different descent by following the ridge to Carn an Fhidhleir and the tracks to Little Forter then back along the road.

Still, you should have had a good day for it!
Heading North - coffee is available at chez nous!

My word, you did make that into a difficult route!
You should have been able to park on the verge opposite Auchavan, cross the cattle grid and take a well formed path to the beallach and the final trudge to the summit - after that you were right gluttons for punishment!
Duchray Hill is readily accessed via the track which starts at NO187661 (excellent parking) leading to the wall you followed to the summit and a different descent by following the ridge to Carn an Fhidhleir and the tracks to Little Forter then back along the road.

There didn’t seem to be anywhere to park near Auchavan that didn’t have no parking signs. It looked possible that there might have been verge parking further down the flooded track, but we didn’t want to risk it!

The traverse between the two hills was easier than the trudge up Monamenach (and where possible we prefer to do two summit days as one walk). One thing I forgot to mention was that when between the two hills we picked up the group who were on Sighty Crag that day. I wasn’t expecting to hear a “G” SOTA station on 2m FM from there. Unfortunately we didn’t manage to find a good enough position to work them.

Park at Dalvanie, follow the track to the beallach, up to Monamenach through the slope and heather, along the ridge to Craigenloch Hill, down and up to Mealna Letta, back down and cross the river at a low point. 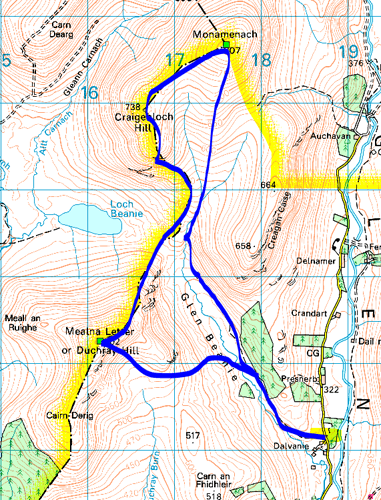 Parking space, unless they have put “no parking signs here”